So perhaps you all are waiting to hear about how cool it was to see Machu Picchu. Well I hear its pretty awesome.

Unfortunately, we didn’t have the chance to go because in January (about one week after we bought our flights) there was a massive mudslide that knocked out the train tracks to the lost city. Mierda. Of course, in typical Latin-American fashion it took the government over two months to restore the tracks and in the meantime there were absolutely no official announcements of its reopening date to ensure that tourists would still come to Peru. Machu Picchu is by far one of the biggest sources of revenue for the country, seeing over 2500 tourists per day, and you would think they would be a little more efficient in repairing the tracks.

But no, it was closed when we arrived in Cuzco; even when we were in Peru, we kept hearing different reports of when it would reopen. The good news was that there were almost no tourists in Cuzco; we had the city to ourselves, which was great! It was also a lot cheaper too. Besides, there are so many other cool Inca sites in the Sacred Valley, so we were able to do a day trip to three of them.

Our third day in Cuzco, saw us waking up early and meeting downtown to get on a bus trip through the valley. We opted to go on an organized tour – as much as absolutely detest them – because it is rather difficult to get around the valley on public transportation, especially now because of the flooding, and we just didn’t have the time. So we met up with our awesome Peruvian tour guide, approx. 4 foot 11. who led us to all the sites. We stopped on the way into the valley at a little bodega touristy spot on the side of the road for toilets, and there was a lady selling corn on the cob. we bought one and it was the biggest piece of corn I’ve ever seen! 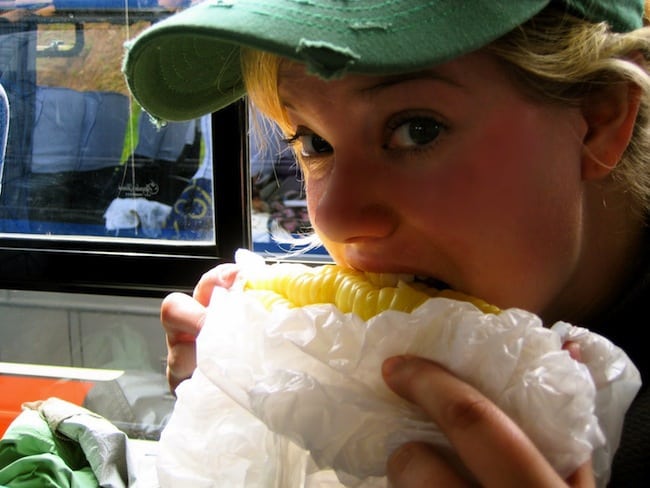 Not as sweet or soft as American corn, but still tasty. Yum! Then we got back on the bus for a winding journey into the valley. The scenery as we headed up into the mountains was absolutely breathtaking! We drove down into the valley, where you could still see evidence of the recent floods. We got to the first site was Písaq, and it was pretty amazing.

We arrived at the top of the mountain before walking along the top of the city. Looking out across the valleys, you could see the shadows of the clouds on the other mountains, as well as the Incan ruins atop the steeped agricultural terraces. There were wild flowers everywhere, and it was so green it almost seemed fake. It was beyond idyllic, and it was like stepping back into time.

We spent a while climbing around the ruins, and taking a million photos of the same view. You could see where the Incan tombs were held before they were all looted away in the mountainside wall across from the city, which was also pretty cool. We departed the ruins at Písaq to go get lunch in one of the towns in the valley. Lunch consisted of completely unidentifiable foods, which turned out to be pretty tasty.

We climbed back on the bus to head to Ollantaytambo, another Incan city in the valley. Much bigger and better preserved than Písaq, Ollantaytambo boasts some spectacular scenery, as well as agricultural terraces, well preserved Inca walls, as well as a partially constructed sun temple at the top. Built by the emperor Pachacuti, and conquered by the Spanish, Ollantaytambo fell into to decline and ruin until rediscovered by European explorers in the 19th century. 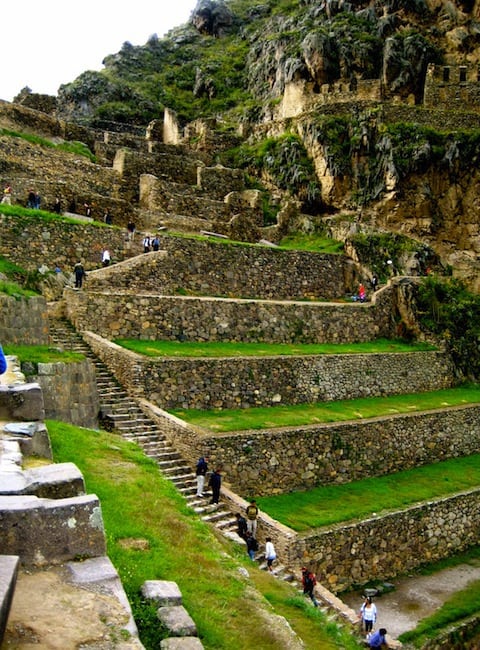 Climbing up to the ruins

We spent most of the afternoon at the site, climbing around the ruins and taking funny pictures before heading back down to the town. I remember that all the climbing we had done began to bother my knee, and climbing down all those steps was super painful. Good thing we had a million hours to spend on buses for recovery time haha. We were heading back out of the valley to our final stop, Chincheros, as the sun was setting.

We got of the bus to head into the store of some traditional weavers. We watched them demonstrate how they wash and spin the wool they get from both sheep and alpaca, how they make the dye and then how they dye the wool, and finally how they weave it. It was really cool to watch, because we had not see the process before. It was a family of girls all working together in traditional Andean garb. They even made us coco tea. 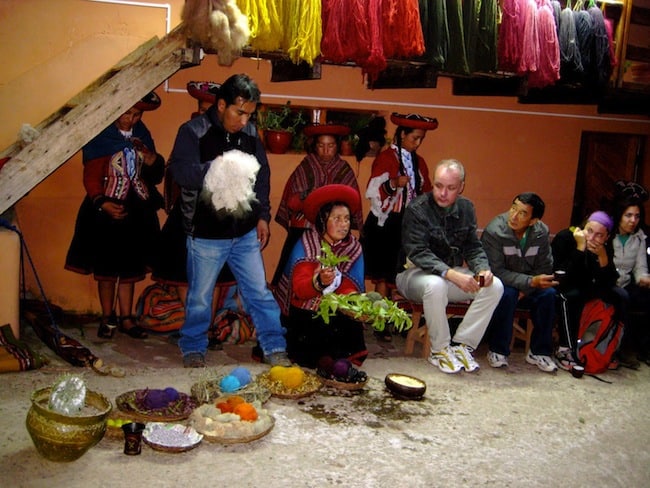 Afterward we had the opportunity of buying what they made. I bought myself a hat and a little purse-bag thing. It was more expensive here than in the markets, but I didn’t mind paying more because it really was not expensive by our standards in the states, and it was cool because we knew it was all handmade. All of the stuff sold in the markets, you can tell are mass produced. We then left the house to walk up to a well-known colonial church in Chincheros. Inside the walls and ceiling were covered in fresco, with a lot of the ornamentation being made from wood. It was interesting to see the adaptation from traditional Spanish churches here. It was also interesting because you could see traces of the old Incan religion in the imagery. We then got back on the bus and returned to Cuzco. After a long night going out, we finally went to bed. phew. long day.

The next day was our last in Cuzco. We were scheduled on an overnight bus to Ica, which was going to take around 14 hours and was leaving at 4pm. We spent the day hanging out in town and doing some souvenir shopping. There was some sort of social protest going on in the main square. Everyone was protesting selling water from one region to another leaving a lot of people without water – this is at least what I think was going on, not 100% sure though.

Anyways, everyone makes a big day of it, all the local transportation was on strike and everyone was parading around town shouting and with signs. They also bused in a TON of riot police with big guns and big shields. It was kinda intimidating. But after talking to some locals, it turns out most of the protests in Cuzco are relatively peaceful and more like family events – not like the ones in Lima or Arequipa. Everyone boycotts going to work, they bring the kids and the family, maybe some fried guinea pig and corn to the square, and just hang out for the day and watch a ton of different organizations parade by chanting with their signs and extremely funny hats. We went into all the different shops, grabbed coffee, and had a nice lunch overlooking all the protests.

I also was able to get my picture with some women dressed in Andean clothing with some Alpacas. They come to the main square knowing that tourists will pay a sol or two (less than 50 cents) for a photo with them. I was totally fine with sacrificing my pride for a pic with them, especially because the alpacas are so fuzzy and cute! So we spent our last few hours in Cuzco taking in the local culture and enjoying ourselves. Before we would embark on the longest bus ride of our lives! 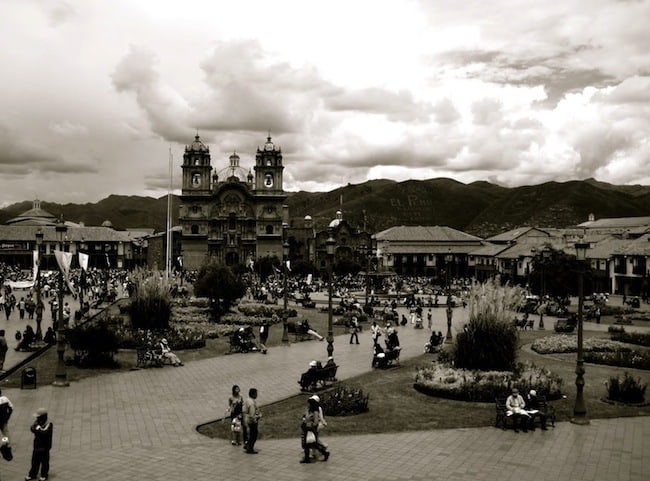 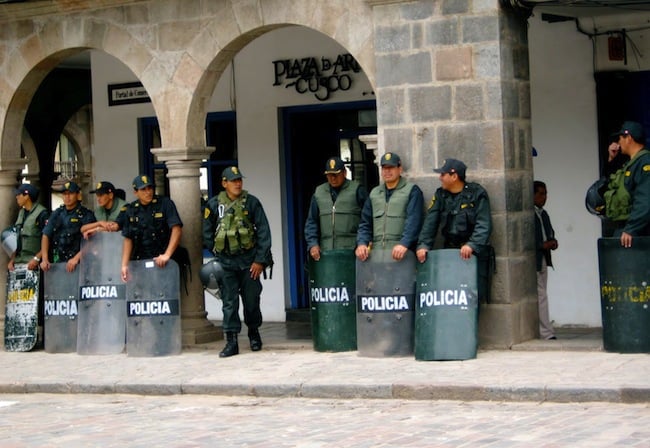 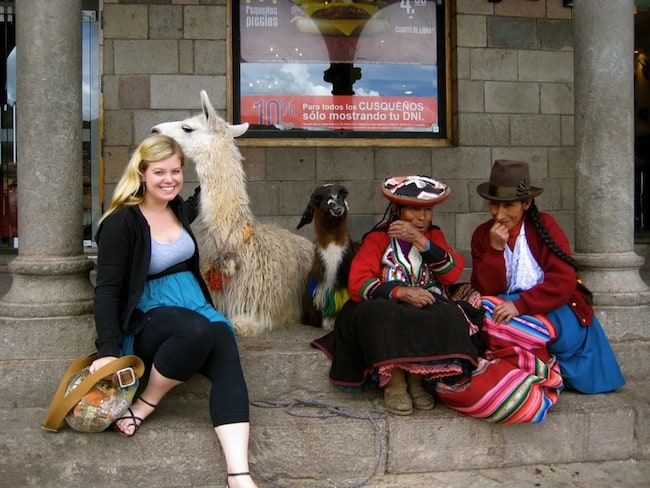 Me with some Alpacas and traditionally garbed Peruvian women
Written by Liz and was published on April 2, 2010 in Adventures, Destinations, Peru, South America and tagged in Peru, travel

2 Comments on “Sacred Valley: Land of the Incas” 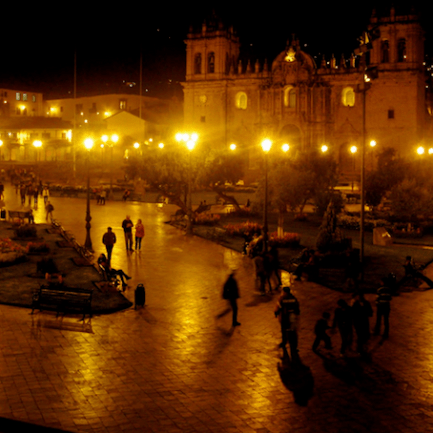 From Huaraz we took a an overnight bus ride back down to Lima;…Read More 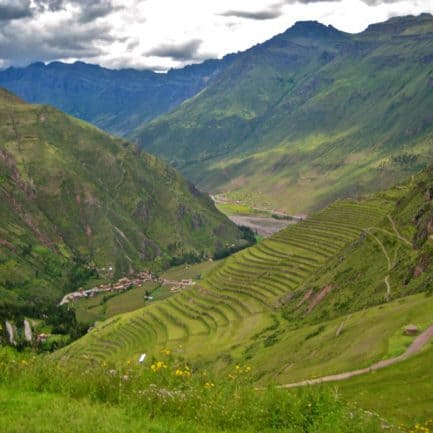