Again sorry for the delay in posting. This past few weeks have been crazy, and I have been running around nonstop traveling and working. This weekend I was in Granada, definitely a bid for favorite city in Spain (post coming soon-I promise!), and last Friday was the culmination of our bilingual week at my elementary school, which we celebrated in style with songs and plays. I’ve been trying to spend as much time outside as I can. It seems that Córdoba has skipped spring altogether and jumped straight to summer. It’s been in the 80’s everyday and hot, but no complaints here! Anyways, so the first weekend in April rolled around, and I decided to leave sunny warm Spain and head up to rainy, chilly England to visit my good friend Jo! Now I was supposed to visit her in December but my flights were canceled due to a blizzard and then an air-traffic control strike. I have such good luck!

Luckily this time everything went smoothly; I caught the train and headed down to the Málaga airport after work on Thursday. I was warmly greeted at the UK border control after midnight at the Gatwick airport. NOT. God I had forgotten how rude UK border control really is. Now London is the biggest city in Europe and accordingly has several airports. The big international airport is Heathrow of course, which I only ever fly to when I am going to and from the States. If you are flying around Europe, most flights leave either from Luton or Gatwick. Stansted is the farthest away from London and rather inconvenient which is why Ryanair flies there a lot. Gatwick is just to the south and where I usually fly to. There is fabulous, well-labeled public transportation to London and around the UK from Gatwick. England has really stepped up her game in preparation for the Olympics. National Express is the main public transportation in England.

Map of southern England with the Gatwick-Brighton route marked

So after getting hassled for a while, I was finally let through customs and was able to catch one of the last trains down to Brighton, on the south coast; it takes about 30 mintues. Also apparently any train after 10pm is the party train, and drinking on said trains is not unusual. Let’s just say it made for fun conversations and new friends. Now this was my second trip down to Brighton, and probably my 10th to the UK, which is maybe why I was bothered so much. I just can’t seem to stay away! I first visited the south in the summer of 2009, and I cannot even begin to express how much I thoroughly love Brighton! It is such a fun city, and I was so glad I got to see it again! It has a young population because of the University of Sussex which is close by. It also has a big LGBT population too, which makes it even more of a blast! Brighton is perfect because it is an hour from London and on the water, and for me it’s a great size, not too big not too small, and it’s filled with tons of independent cute shops, cafes and restaurants, the likes of which are harder and harder to come by in the States. At least this time around I was exchanging money from the euro to the pound, so the exchange rate didn’t suck to badly; but let me just tell you, exchanging from the USD to the pound SUCKS! 1 GBP is 1.63 USD. Fail.

I spent Friday wandering around Brighton, rediscovering forgotten spots, browsing shops, and buying books in English! It was so nice to hear English again (even if they say ridiculous things like calling cookies “biscuits” or “please alight from the left side of the train”). I bought some new sneakers (trainers for my UK friends hehe), some awesome Golas, my favorite brand and spent the afternoon reading in a cafe. The next day we spent in London, which I will post about later, and then on Sunday we spent the day in Brighton, shopping some more, exploring, walking along the boardwalk, and eating delicious Japanese food! It was so lovely, and man I missed hanging out with Jo! 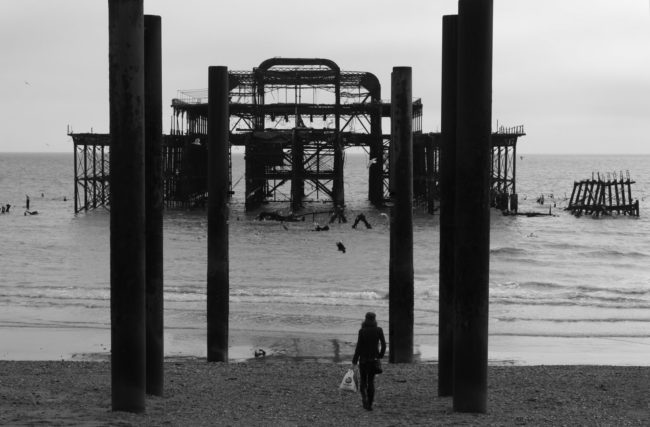 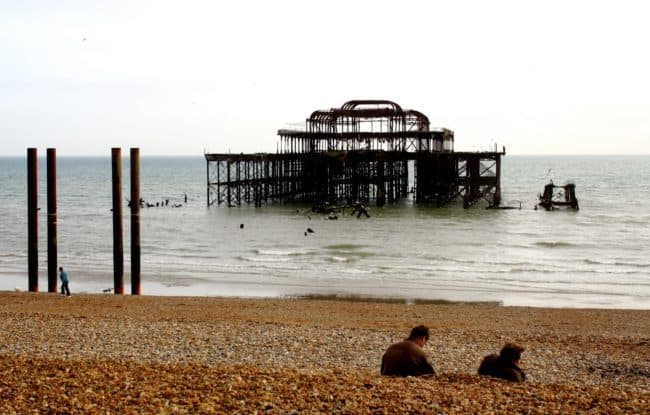 Remains of the old pier 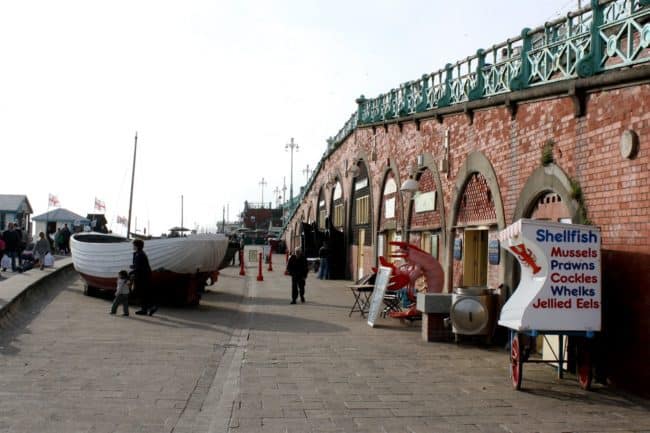 Walking along the beach. Jellied eels? No thanks!! 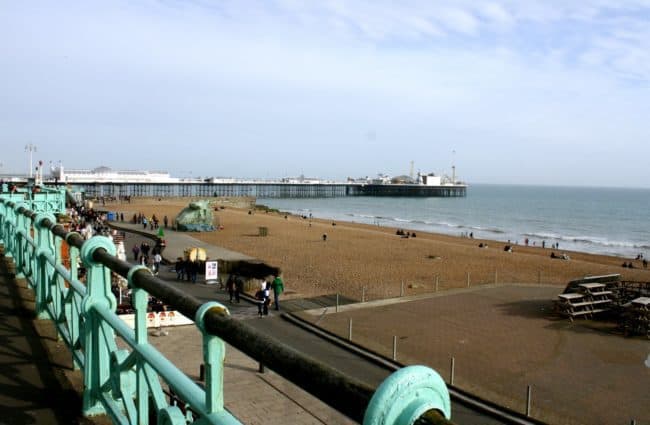 View of the unburnt pier and beach in from this trip 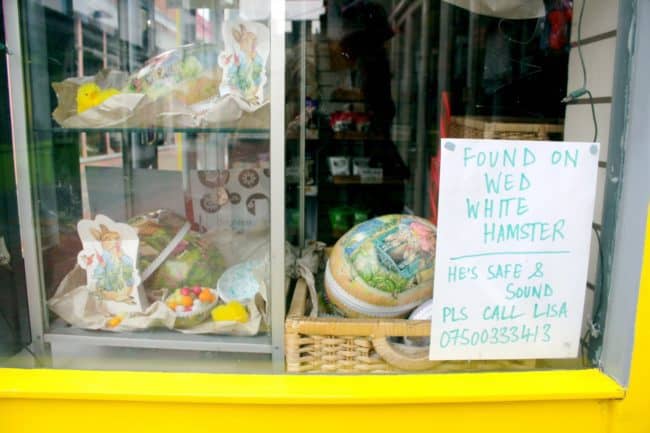 Who on earth loses a hamster?

Last time I was in Brighton with Jo it was summertime (2009), and I was there during their Gay Pride, which let me just say, is INCREDIBLE and SO FUN!!! Everyone is open and celebrating diversity, parades, partying in the streets, usually in costume or drag. It’s kinda like carnival, and it’s an event for everyone, children and adults, and the child in all of us. And there are rainbows everywhere! I was so lucky to be introduced to Brighton during its biggest festival! If you ever get the chance to go to Brighton during Pride, I definitely suggest it. Here are some pictures from that trip: 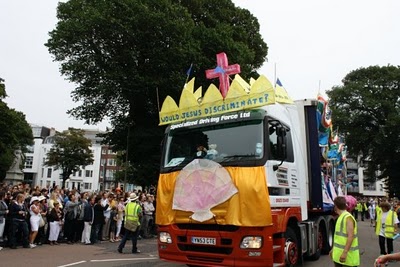 Pride parade: Even the churches in Brighton support gay rights! The minister was wearing a rainbow priest shirt and all! So cool! 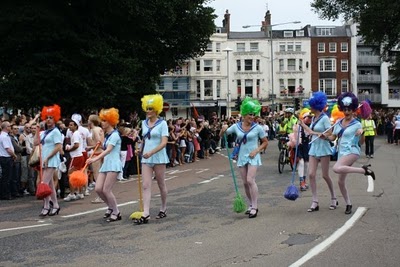 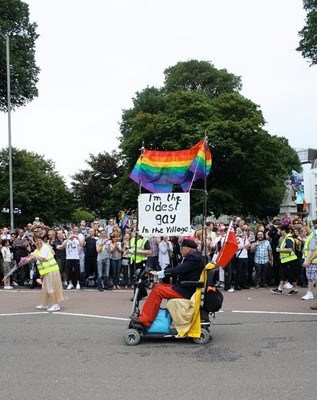 Kinda awesome “I am the oldest gay in the village” 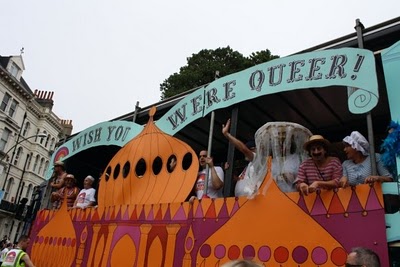 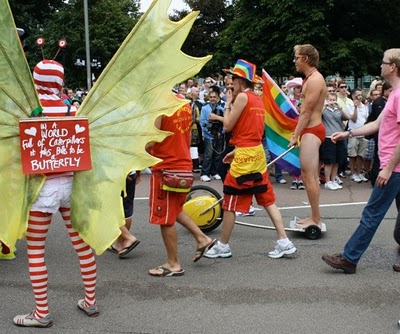 More of the pride parade: “In a world full of caterpillars, it takes balls to be a butterfly” favorite costume of the parade for sure!
These are some of my old pictures of Brighton from 2009 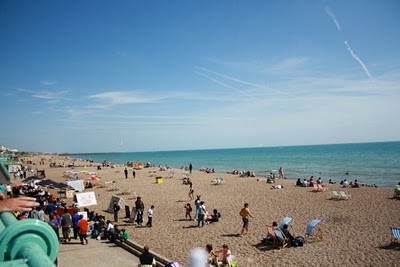 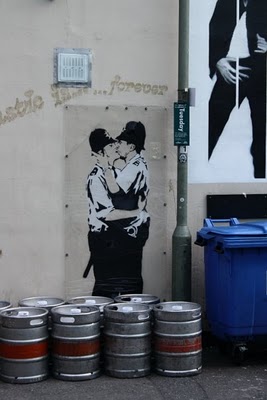 Famous Banksy tag in Brighton near some dumpsters. Banksy is a famous British graffiti artist who’s identity is unknown. Read more about him here 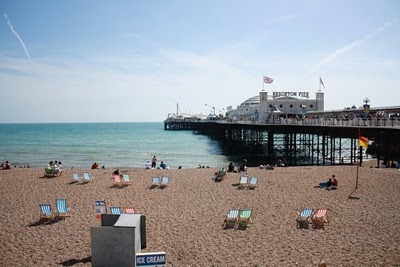 The pier and beach in summertime

Written by Liz and was published on April 10, 2011 in England, Europe and tagged in brighton, England, lgbt, rainbows, travel

3 Comments on “Brighton-Land of Rainbows” 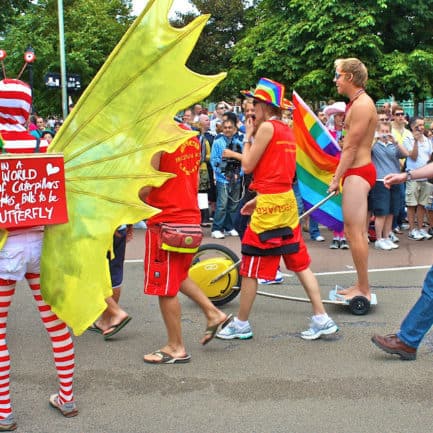 With all this media attention in the States about Chick-fil-A and LGBT rights,…Read More 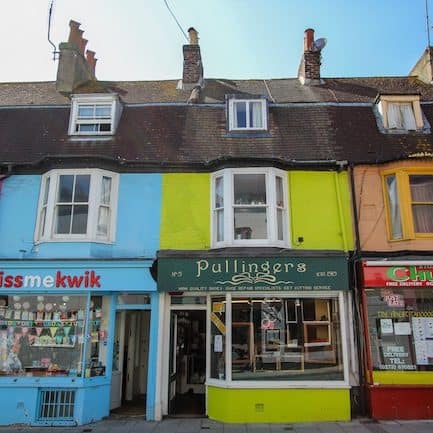 "I am sure my sisters must all envy me. I only hope they…Read More 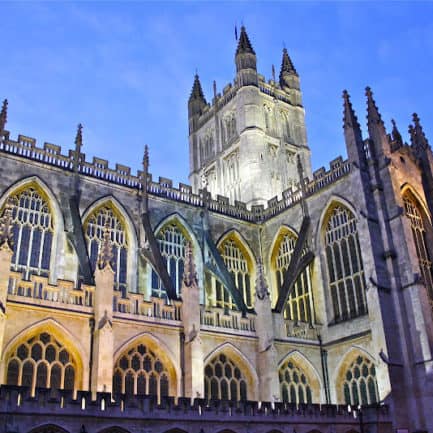 In the summer of 2009, I was living the dream, getting to live…Read More
More travel stories