Home » Blog » Adventures » If You Go Anywhere in May, Go to Córdoba, Spain 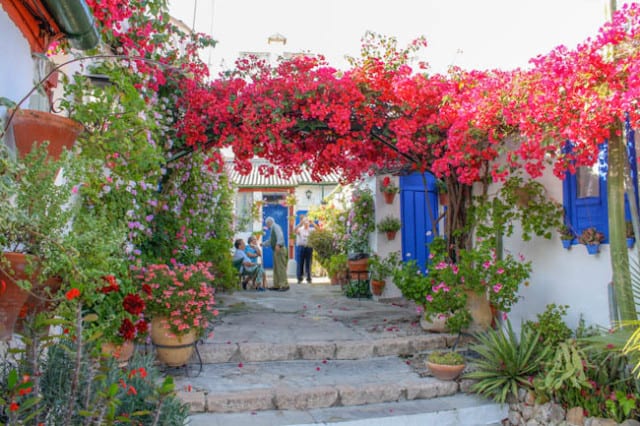 From 2010 to 2011, I was lucky enough to call Córdoba, Spain home. Nestled between Sevilla and Granada, two rockstar Spanish cities in the south, Córdoba often gets overlooked on traditional itineraries. Many times, tour buses just stop there for a day trip to visit the famous Mezquita mosque-cathedral if at all.

But believe me, Cordoba has way more to offer; it is a vibrant, traditional city, full of color. Unfortunately it took me about 6 months to truly fall in love with it.

Between having to commute an absurd amount of time to a job I hated, to a horrible apartment with awful roommates and no heat, to dealing with a long distance breakup, I pretty much was a disaster my first winter there. Grumpy and always frozen, I couldn’t wait until spring. Luckily, all my coworkers and friends repeatedly told me over and over again, just wait til spring, wait until May. May is the best time to visit, they said.

And they were not wrong. Córdoba during most of the year rocks.

But May in Córdoba is PHENOMENAL. 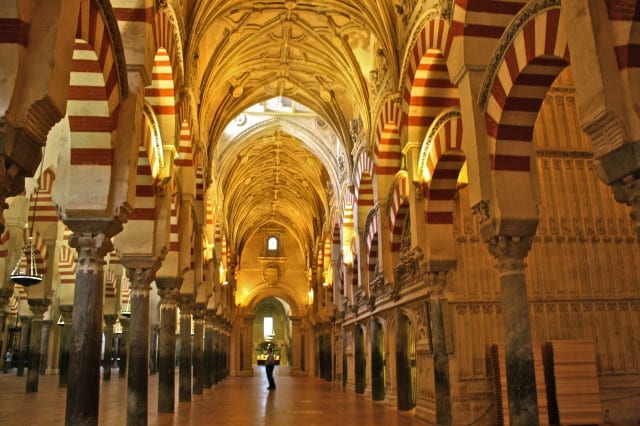 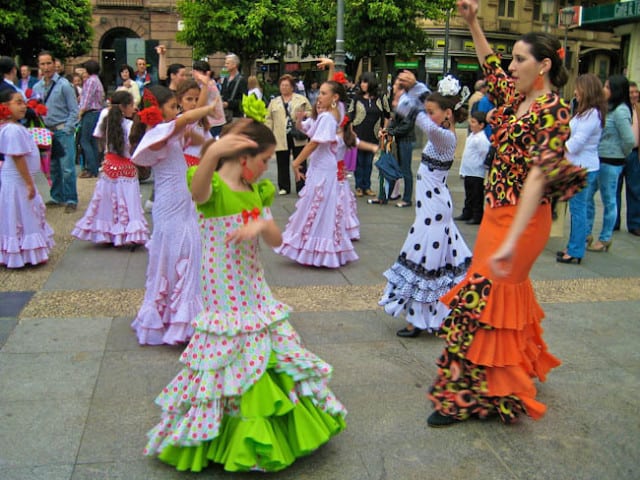 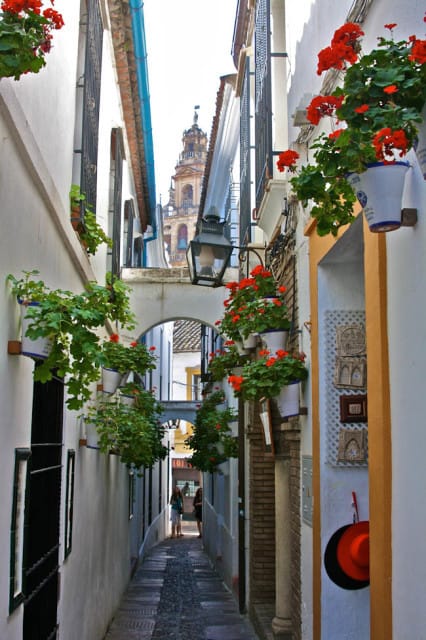 The perfect month between rainy, chilly winter and before the scorching summer sun appears, May is the perfect time to visit Spain. Apart from the fact that city literally blossoms and smells like flowers, proving the old adage, April showers bring May flowers true, there is so much to do! Under blue skies, everyone goes outside, enjoying drinks and tapas on the plentiful terraces in the sunshine, and everyone gets excited for the festivals.

In May, there is a festival every week in Cordoba, turning the city into one giant vacation (details here). There is always something going on; it was just remarkable. I don’t think I was sober any weekend (or week day for that matter) from late April to June.

If you like experiencing local culture and events, go to Cordoba in May. All of these festivals are very popular with Spaniards but there are hardly any foreign tourists. 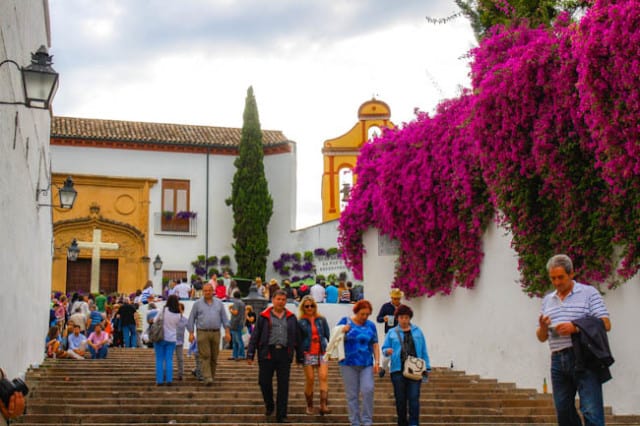 Cata del vino is a wine tasting festival that kicks off a month of holidays. The Cordoba region is well known for its white wine varieties. Since southern Spain is so hot and dry, compared with La Rioja in the north where I lived last year, the grapes grow differently, and chilled, dry white wines are more popular. At the entrance you buy a ticket to get you in with 5 drink “tastings” and a free glass, and you can go from stand to stand and pick out and try hundreds of varieties of white wine. But remember that “tasting” size in Spain is no different from a regular glass size, so be careful.

In fact, the wine sellers are so friendly they don’t usually even look at your ticket to see how many glasses you have left, letting you try as many wines as possible. This means bring food. We were naïve, and had to shell out for food there, which wasn’t too cheap, whereas the seasoned locals, brought little coolers and bags of pre-sliced Spanish ham and full tortillas to share and snack on. Smart thinking. 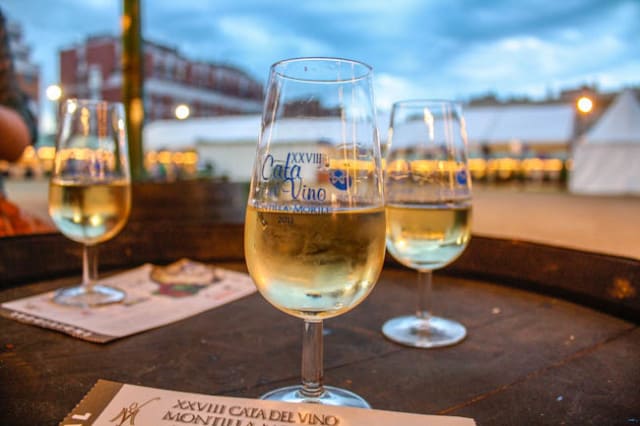 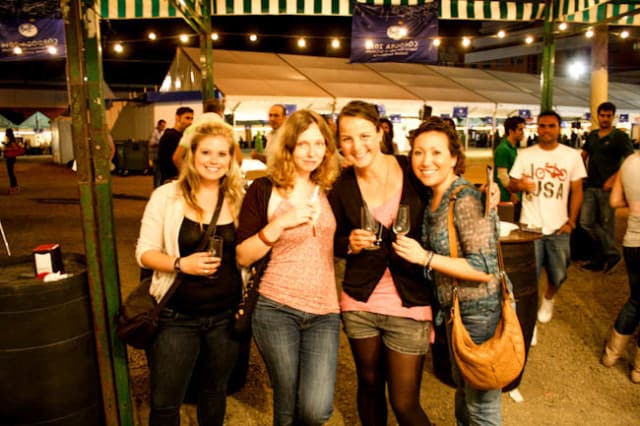 In Spanish, cruces means “crosses,” and in this colorful festival, the various catholic brotherhoods around town, cofradías, each place a giant cross made of flowers outside their church in a little square for a few days. These are the same people who walk in the processions during Semana Santa. In the religious paradox so often found in Spain, the brotherhoods also set up bars and stands next to the crosses outside with music blasting to raise money. Bring on the mixed wine drinks!

From the local tourist office you can pick up a map with the crosses’ locations around Cordoba marked out, and it’s great fun to go out with friends and hop from one cross location to another, eating and drinking all day long and all night long. At one of these stands near my apartment, I attempted to dance the famous flamenco sevillanas for the first time, after about a bucket of sangria first. 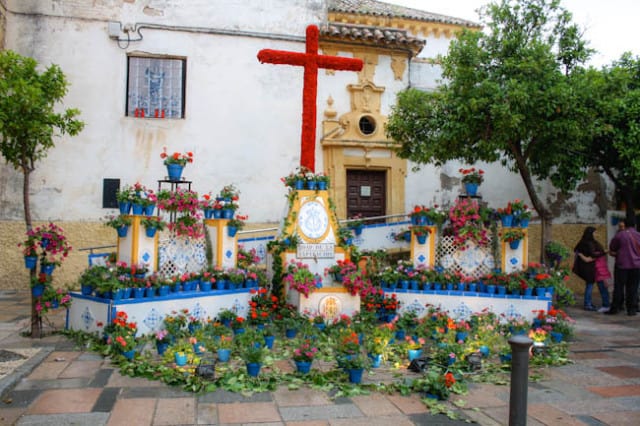 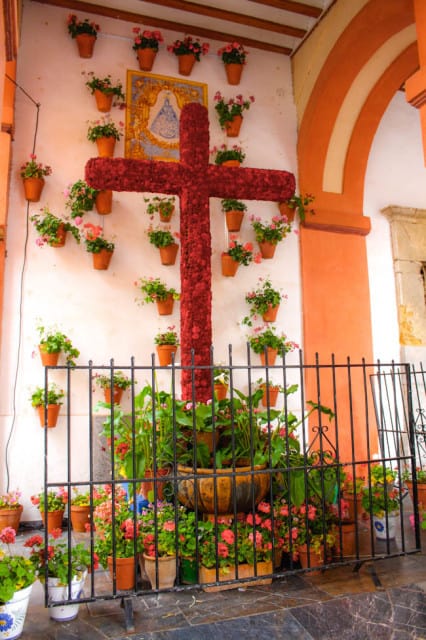 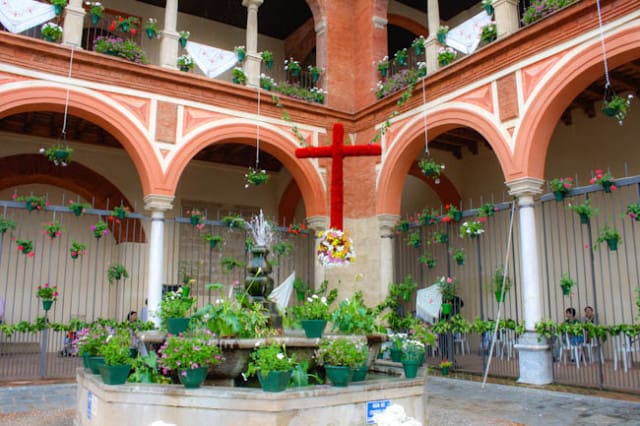 This is by far my favorite May event in Córdoba. With spring in full swing, all of the flowers around town come alive. Córdoba is traditional Spain at its finest, with an extensive old quarter filled with winding cobblestone streets and whitwashed walls that keep the houses cool in the hot summers. Many of the old houses and apartments are situated around an interior patio. You walk through the front gate, and the rooms and apartments are off to the sides of a square center.

In the past, these patios were turned into gardens with a well in the center, and were used for just about everything. Families planted beautiful pots of flowers everywhere, from pots hanging on the walls to huge burnt red terracotta vessels on the ground. In May, the flowers are in full bloom and literally cover these patios from head to foot in fragrant flowers. It’s a wonder to behold, really. 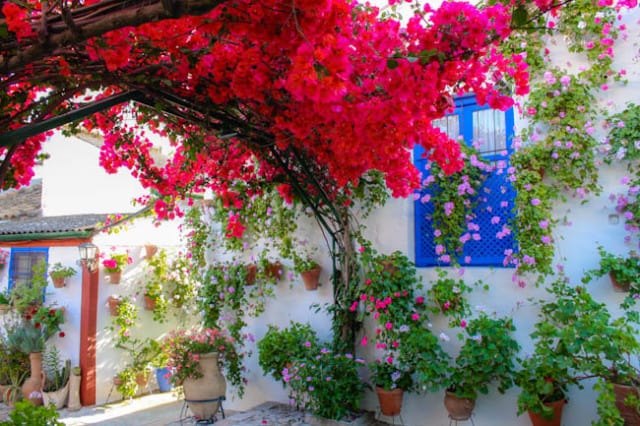 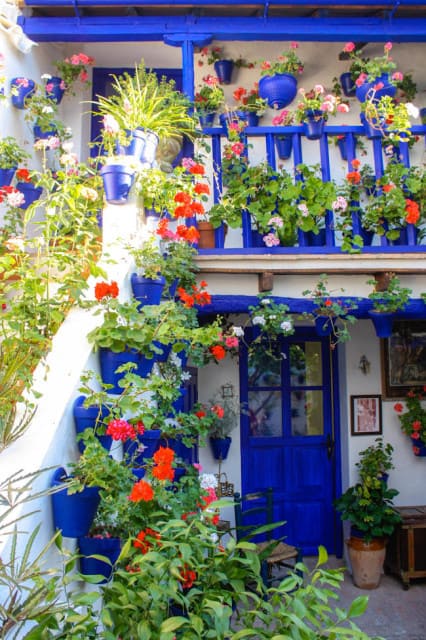 Since these are private houses still in use today, the patios are closed to the public during the year, and are only opened for two weeks in May when the families compete in a contest for the most beautiful patio in Cordoba. The patios are marked by two little pine trees outside the gate, most are congregated in the old quarter – and they are all free to visit. You can pick up a map from the tourist office that has all the competing patios listed.

When I was in Córdoba, I took the time to visit each and every patio, hoarding thousands and thousands of pictures. It can get crowded, especially on the weekends, since busloads of Spaniards come to town to visit this famous festival, so it’s best to go early or midday, or during the week unless you want a million heads in your photos. 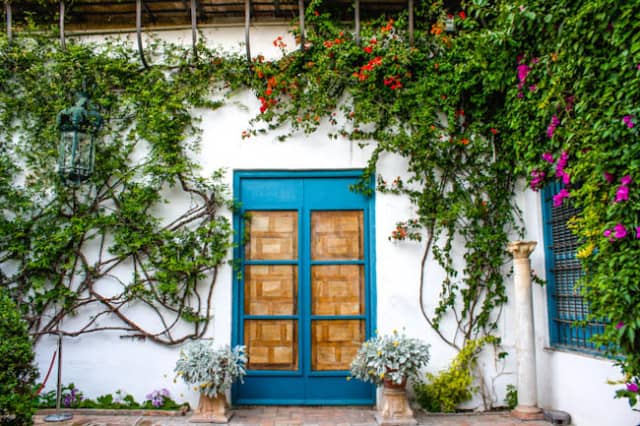 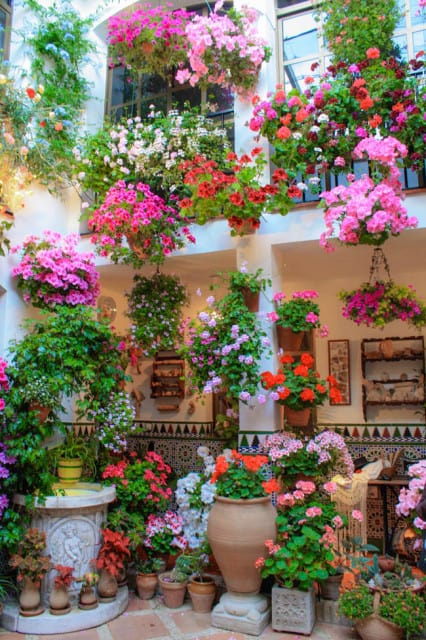 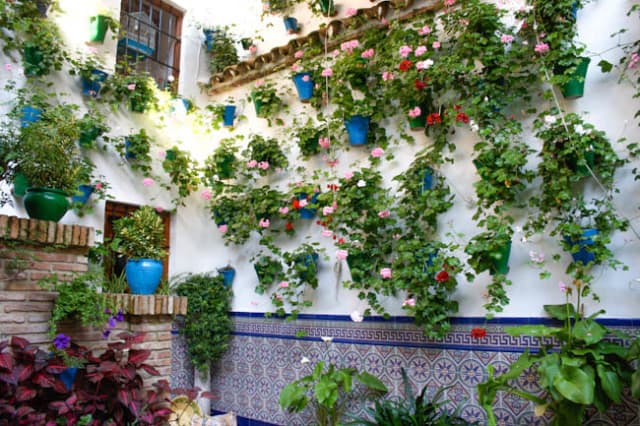 But like always, Córdoba saves the best for last: the culminating festival in May is the most fun: la feria (fair). Nothing like the skeezy borderline dangerous fairs we have in the US, í are a true part of southern Spain. Each and every village and city in Spain has one or two major holidays during the year, and Córdoba’s main festival is the feria. Ferias are popular in southern Spain, where girls break out their flamenco dresses and boys squeeze into the traditional gypsy costumes of their ancestors to celebrate.

The most famous Spanish feria is in Seville, the major city in Andalucía, but I wholeheartedly disagree that it’s the best. In general, Ferias are set up in certain areas of town and are made up of tents (casetas) where you go inside and order drinks, food, listen to music and of course, dance. In Sevilla, the casetas are private and you can only go inside if you know someone and are invited. Um, where’s the fun in that?

Well in Cordoba, all the casetas are public AND there are hundreds, crisscrossed like streets. Every year the feria is set up across the river underneath a magnificently lit entrance that mimics the famous Mezquita in town. Since Córdoba is smaller than Sevilla, I always run into people I know out and about, making it really fun and familiar. The typical drink ordered in the casetas is called rebujito, which is the dry white wine typical from the region mixed with 7-up and ice. May sound gross but on a hot sunny day, it’s delicious! Just be careful as it goes down like water! Also during feria, the bullfights begin, with many going on at the ring in town, if you are feeling adventurous. 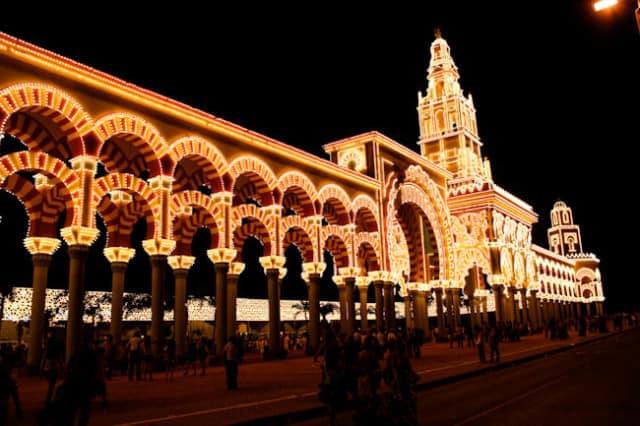 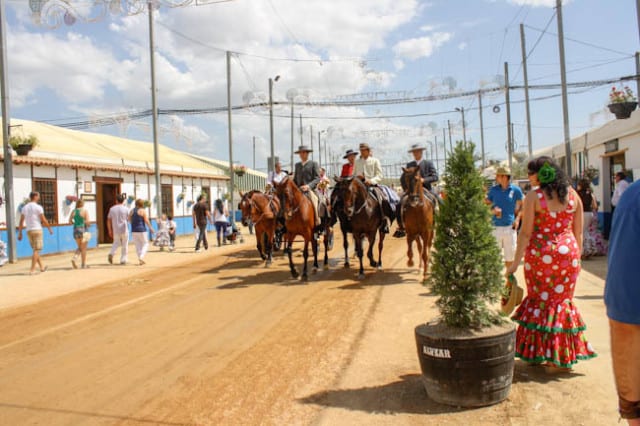 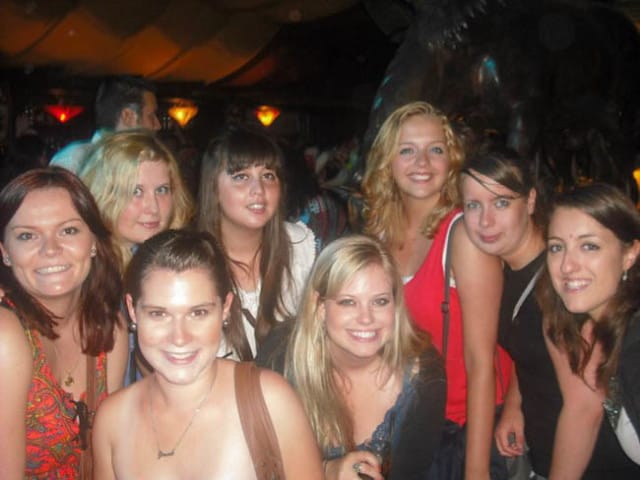 How to get there

Córdoba is really well connected to the rest of Spain. It is on the AVE high speed train line to the south, less than 2 hours from Madrid, and an hour from Seville and Málaga on the south coast. Spain’s train company is called Renfe. Córdoba is also really well connected by bus, you can check all the bus times and destinations here. If you want to fly to Spain, I usually would fly into Madrid, take the metro to the AVE train station at Atocha and catch the train to Córdoba, but if you want to fly closer to home, Málaga has a major international airport, and Seville and Granada also have small airports, some serviced by EasyJet, Iberia and the dreaded Ryanair. You can also hire a car in Spain in Malaga or Sevilla and easily drive to Córdoba, getting see some of the spectacular hill towns – but be sure to check the fuel terms and conditions.

Have you ever been to Córdoba, Spain? Would you like to go in May now? Where’s the best to place to visit in spring? 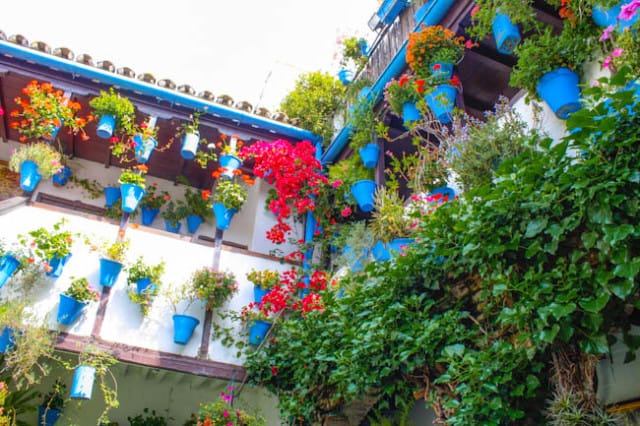 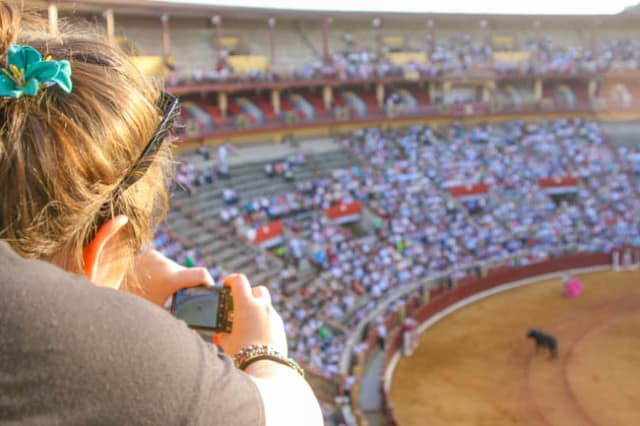 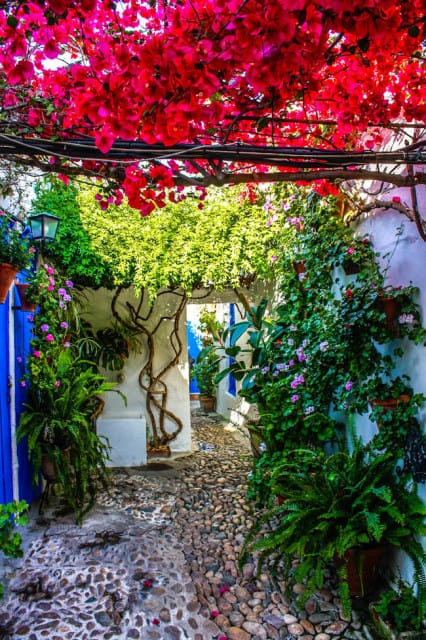 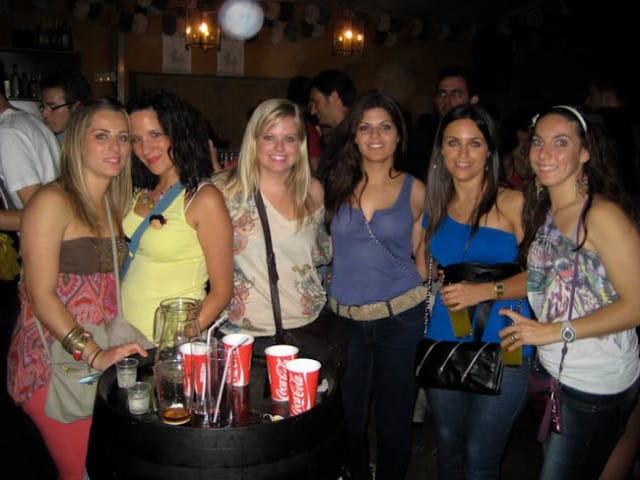 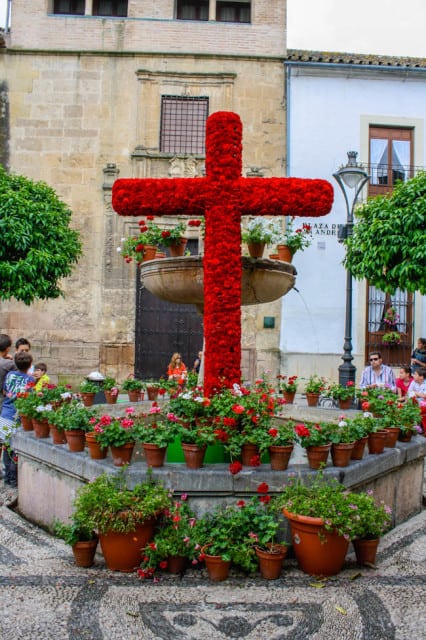 Written by Liz and was published on April 19, 2013 in Adventures, Destinations, Europe, Spain, Wine and tagged in andalucia, andalusia, Cordoba

63 Comments on “If You Go Anywhere in May, Go to Córdoba, Spain” 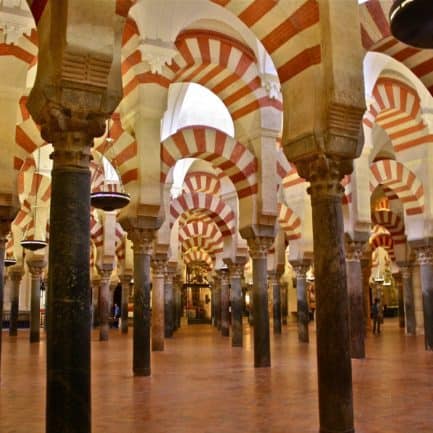 The Colors of Córdoba, Spain

Before I moved to Logroño, I lived for a year in Córdoba, in…Read More 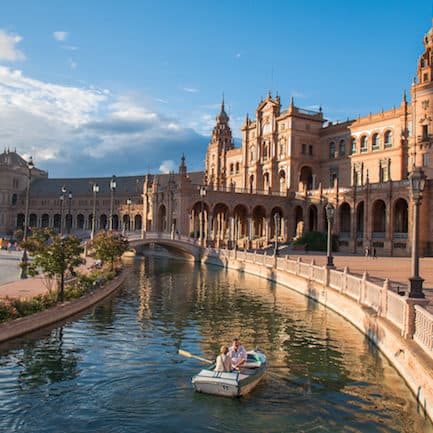 Sevilla is one of the first places I ever visited in Spain, way…Read More
More travel stories