Home » Blog » Adventures » The Legend of Katla Volcano in Iceland 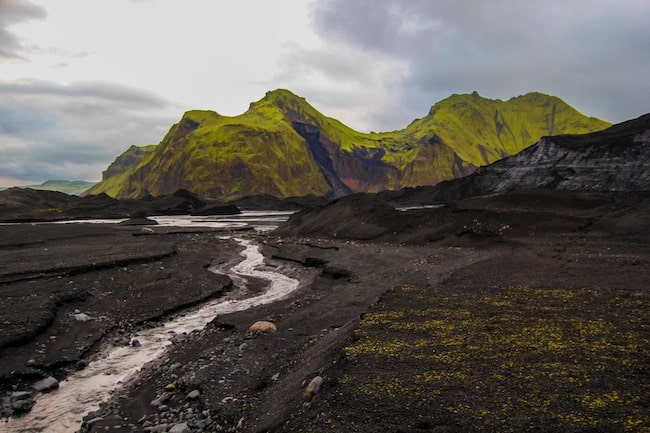 Once upon a time there was a monastery nestled among the jurassic green hills of southern Iceland. Nearby was the impressive Mýrdalsjökull Glacier (try saying that five times fast), a mountain of ice looming over the south coast of this unforgiving land.

Run by  a friendly abbot, the monastery thrived with villagers and locals coming to work together and chip in, a community of people working hard to survive the harsh arctic winters. Among them was the housekeeper, Katla. Powerful and frightening, it was whispered that she was a witch, though none dared speak of it to her face.

It was rumored that she used her black powers to create a magical pair of panties, and whoever wore them could run as fast as the wind and never get tired. 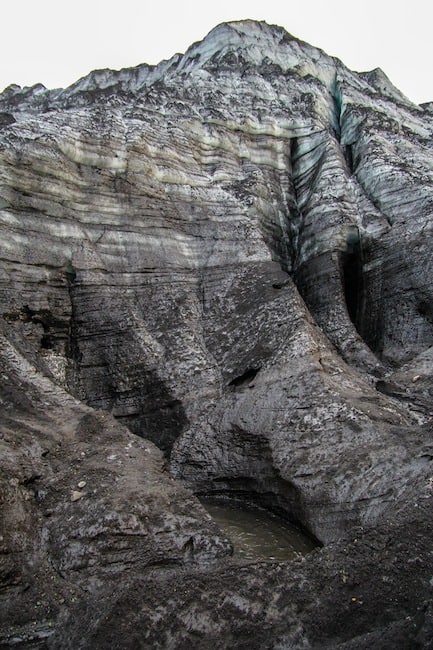 Feared by all, including the Abbot, Katla had a terrifying temper and most avoided her when possible.

The hardest worker in the abbey was a shepherd named Barði. Simple-minded but friendly to all, Barði’s usual duties were to take care of the sheep, which if you have ever been to Iceland, you know are EVERYWHERE.

Terrified of Katla, Barði was careful to never offend her, but sometimes he couldn’t find all the sheep to herd and she punished him. Voicing his fears to the Abbot, he was told not to worry, that he had no reason to be afraid of the housekeeper. 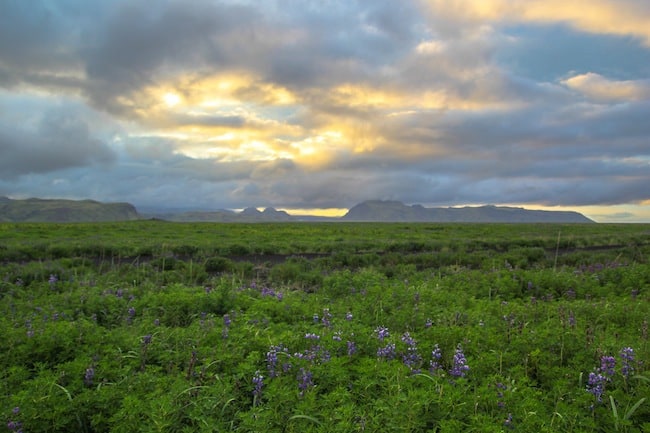 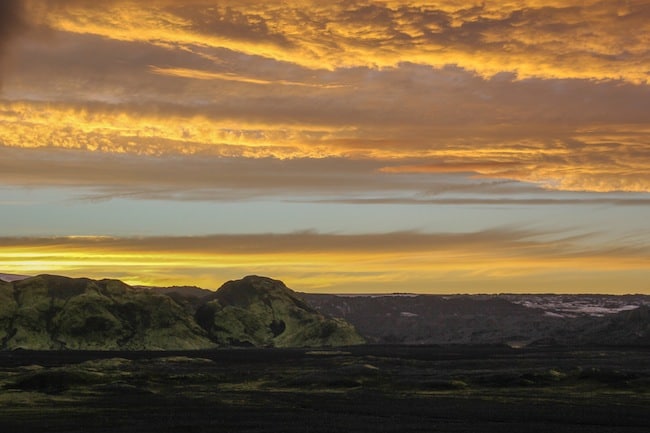 “I know I shouldn’t say anything sir, but it’s Katla. She really, really scares me,” said Barði in secret one day.

“Don’t worry, my child. We are all God’s creatures, and everyone can be saved,” the kindly old Abbot replied. Little did he know how much he would come to regret those worlds. Dun, dun, dun.

One day he returned home from a long day of working in the fields to find Katla waiting for him. Shaking down to his very boots in terror, Barði stood silent while Katla yelled that one sheep was missing. Getting ready to leave for a party with the Abbot, Katla warned poor Barði that he better find the missing sheep before they returned….OR ELSE!

“If you don’t have that missing lamb back in its pen before I return, don’t bother coming back!” She cackled! 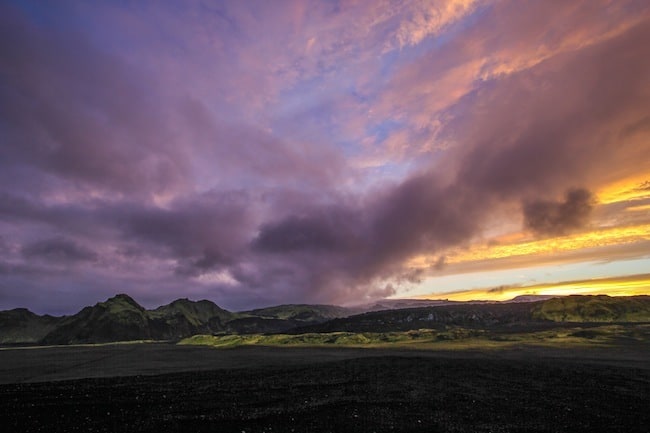 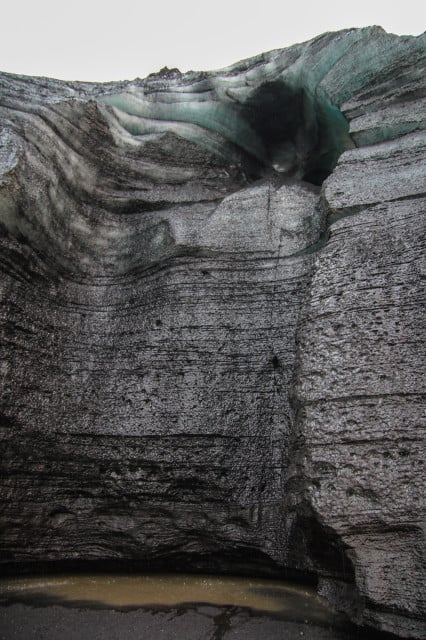 Scampering off in fear, Barði panicked about what to do. He spent all day looking and couldn’t find that one sheep. What to do? What to do?

“If only I had a horse or someway to find that stupid sheep,” thought Barði to himself.

The sun was starting to set and fearing he would be out at night looking high and low in the dark, Barði began to panic.

Suddenly the lightbulb clicked on in Barði’s mind. Katla’s magic panties! If he could find them and wear them, he was sure to find the missing sheep like THAT! 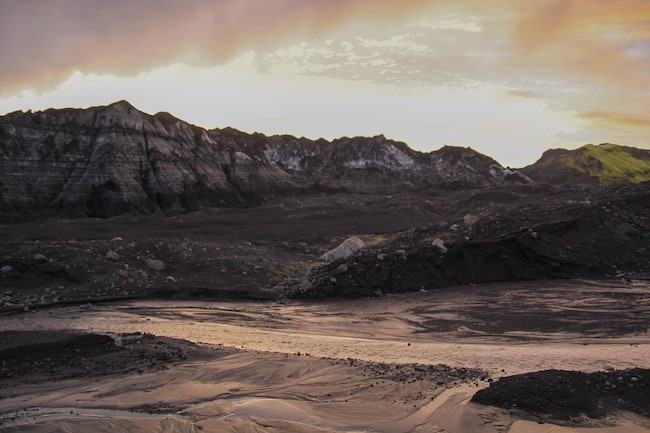 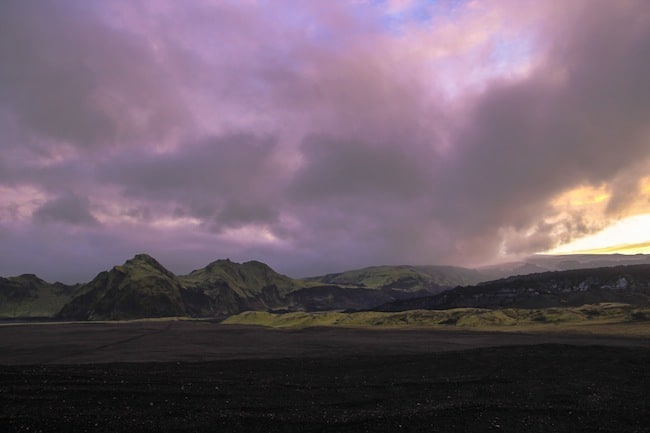 Hightailing it back to the monastery sheep in tow, he quickly put Katla’s panties back where he found them and waited for them to return, pleased with his quick thinking.

Little did he know that Katla was all-powerful, and knew immediately what he had done. Livid with Barði for both stealing her underwear and trying to outwit him, Katla lured the poor shepherd down to the wine cellar (though, let’s be honest here, I would be pretty peeved if some guy wore my undies, magical or otherwise!)

“You stole my magical panties, I know it!” Shrieked Katla at the cowering shepherd among dusty bottled of red wine and mead. “No one could find a sheep like that so fast in the dark!” 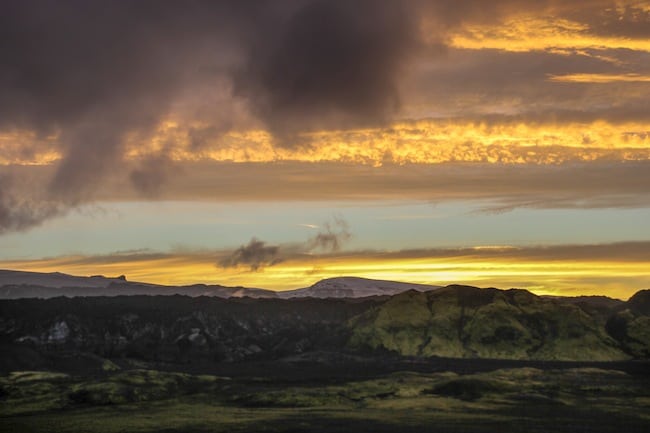 Shoving poor Barði into a giant vat of wine, Katla drowned the shepherd in a fit of rage. Leaving him inside the vat til spring, she went back to work as if nothing happened. The Abbot and everyone else at the monastery thought he disappeared while looking for the sheep.

After a few months, the weather grew warmer and the level of wine was dropping so low Katla was sure the Abbot would find Barði’s body sooner rather than later. Fearing discovery, Katla ran away from the monastery as fast as she could towards the Mýrdalsjökull Glacier.

Jumping into a crack in the ice, Katla the witch wormed her way below, discovering a dormant volcano beneath the glacier. Searching for the entrance, she finally found her way inside, burrowing her way into the volcano. Shortly after there was a huge eruption, causing a tidal wave glacial flood all over the south coast of Iceland, destroying everything in its path.

Since that day, the volatile volcano that sleeps beneath Mýrdalsjökull has been known as Katla, and even now she causes fear among foreigners and Icelanders alike. 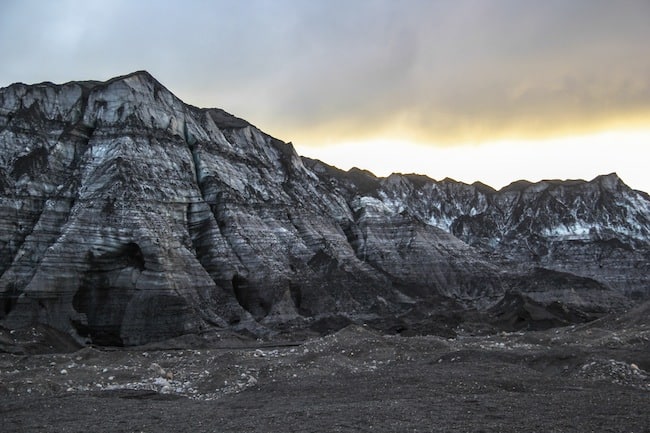 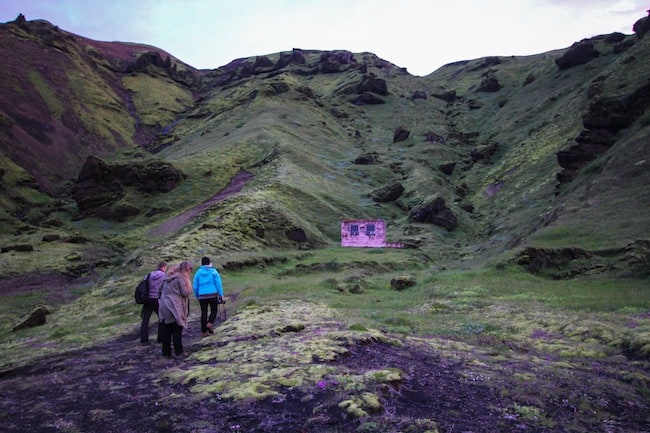 The eternal summer sun in Iceland had just started to wane by the time my #IcelandChallenge with Tiny Iceland unloaded from the SUV in Vik on the south coast on a 7 day stopover with Icelandair.

Already impressed with the magnificent mossy green mountains and dramatic black coastline, I was itching to explore this mystical land. With tendrils of fog creeping down from the obscure mountain tops, if I closed my eyes it truly felt like I stepped back in time a thousand years.

This was a land where anything could happen. 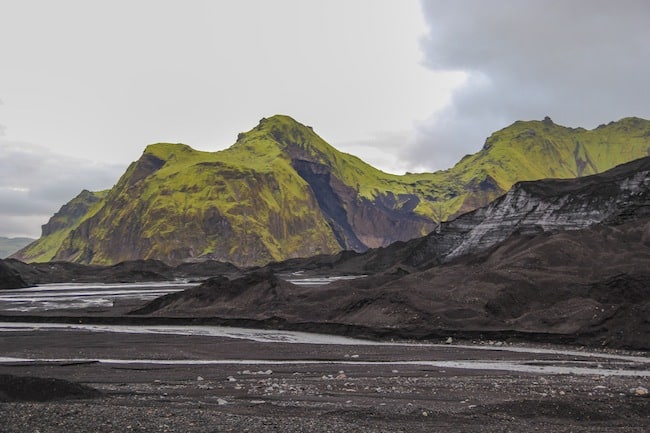 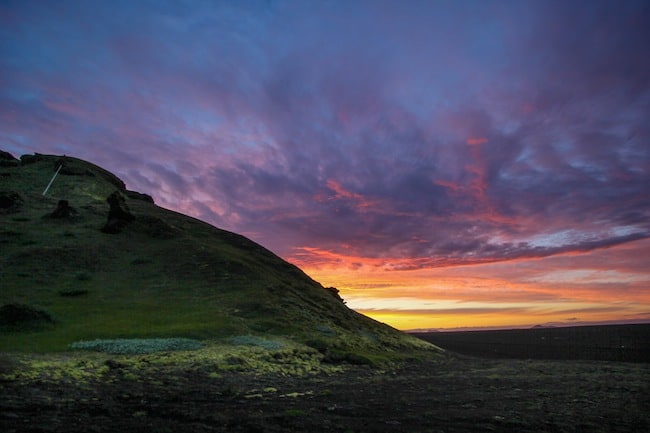 After shoving down a hot dinner, we met up with the Hotel Edda manager, Elías, and his brother, Guðjón, where we were staying the night in Vik. Thinking we were heading off to bed soon, we were in for a real treat at 10pm when we were invited to get up close and personal with Katla.

Guðjón runs Katlatrack, superjeep tours around Katla and Vik, and while ominous clouds rolled around above us, we climbed up in the biggest Jeep I’ve ever been in and rumbled off. And by climbed, I mean, I gracelessly struggled to yank myself up in the front seat. Little people problems.

Luck was on our side and as we turned off the “main” road onto black volcanic sand and ash fields, the clouds started to lift, giving us a peek at the green mountains and distant white and black Mýrdalsjökull Glacier. 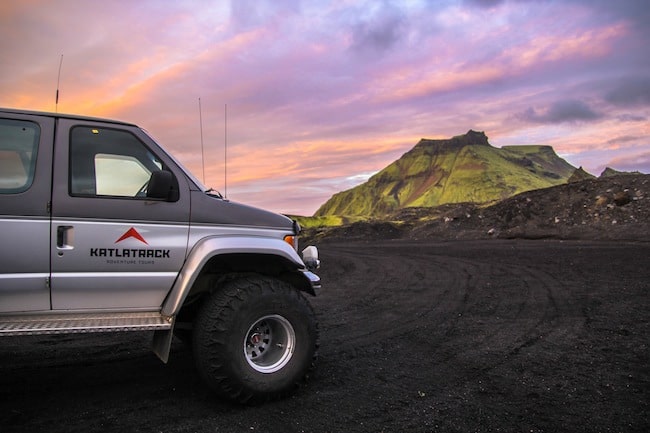 Driving through beautiful tall green fields of blooming purple lupins growing up from the black sand, it felt like we stepped into an alternate universe or at least the movie Avatar. Neither before or since have I ever been privileged enough to witness such a magical and alien landscape.

With AC/DC bumping in the background Guðjón recounted the legend of Katla and how the volcano got its name.

He also went into depth and explained the dangers of this powerful volcano nowadays. Ever since the legend began, Katla has consistently erupted every 80 years, the last eruption back in 1918. While seeming innocent enough, Katla is actually much more threatening than first glance specifically because she is buried underneath the glacier.

This means that WHEN she erupts, if it’s big enough, it will melt the ice causing a tsunami-like glacial flood four times as powerful as the Amazon river. 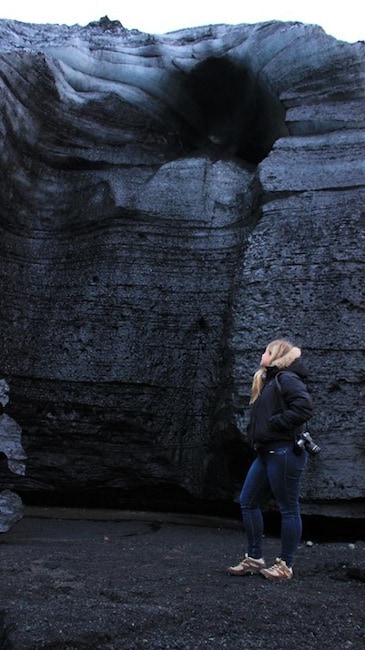 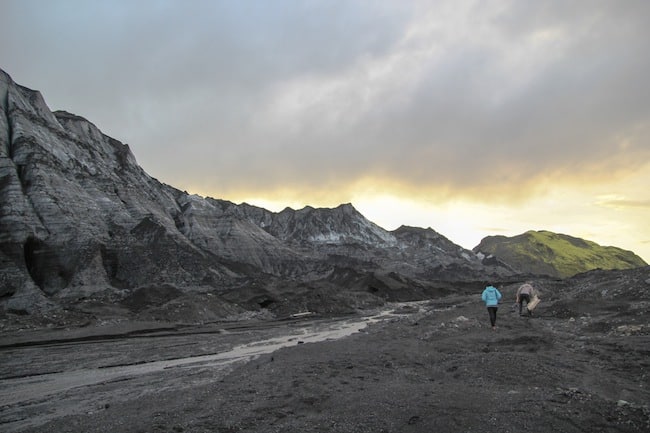 Citizens of Vik are raised on these legends and evacuation drills. With safehouses scattered around, everyone is prepared to make for high ground the day the next big eruption occurs.

Hopping down from the superjeep we carefully follow Guðjón along the muddy ground and ice, making our way towards the ash-covered glacier. This is a changeable land and you can only visit with trained guides, otherwise who knows what can happen.

Listening to the profound silence broken up with the cracks and moans of the glacier, you begin to understand why Iceland is such a magical place, grown on stories. It’s no surprise that such legends exist. 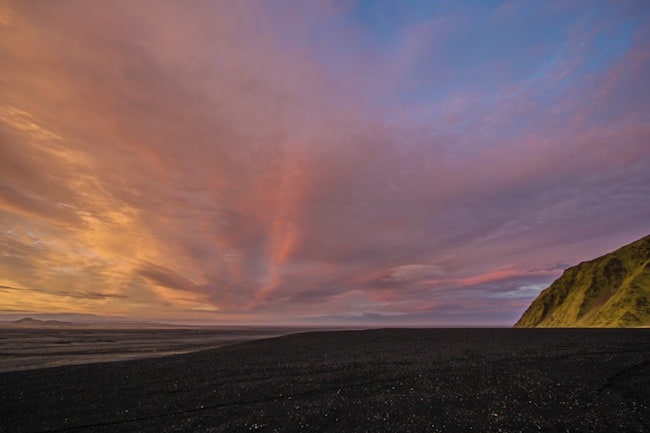 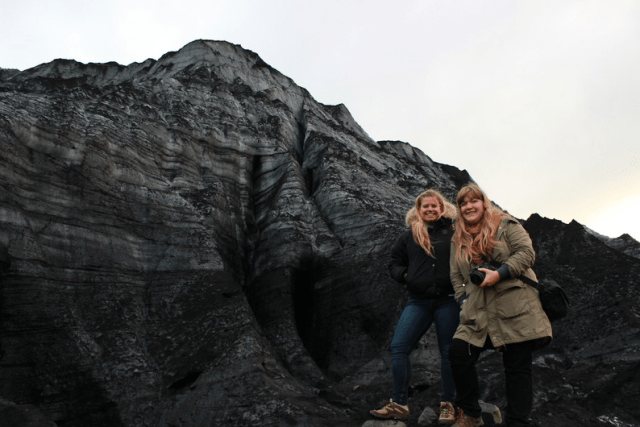 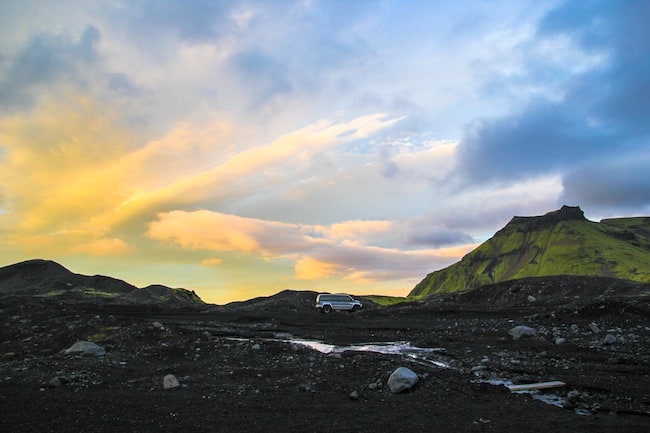 Luck was on our side and the clouds lifted high enough to give us both a glimpse of the tops of the white glacier in the distance and see the peaks of the spiky green mountains surrounding us.

I will never forget standing there, staring off at the purple, orange and pink clouds, with my boots in the sand and the chilly July wind blowing through my hair, creating a veritable rat’s nest. But who cares?

It was the very first moment I got to witness the midnight sun in Iceland; perched there at the end of the world, staring at this famous witch of a glacier-encrusted volcano, I thought to myself, smile, for this IS one of those moments you will remember for the rest of your life. 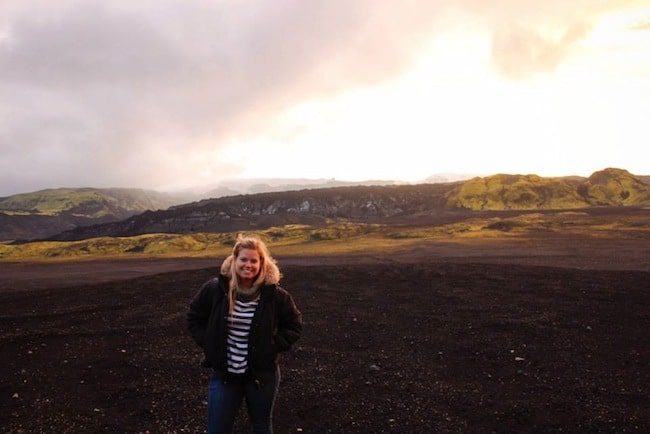 Read more about the #IcelandChallenge at Katla here.

Have you ever been to Iceland? Would you like to go one day? Ever encountered any fun stories or legends while traveling? Spill!

Many thanks to Tiny Iceland, Icelandair, Hotel Edda and Katlatrack for making this #IcelandChallenge possible. Like always, I’m keeping it real, all opinions are my own – like you could expect anything less from me.

Written by Liz and was published on October 27, 2013 in Adventures, Destinations, Europe, Iceland

18 Comments on “The Legend of Katla Volcano in Iceland” 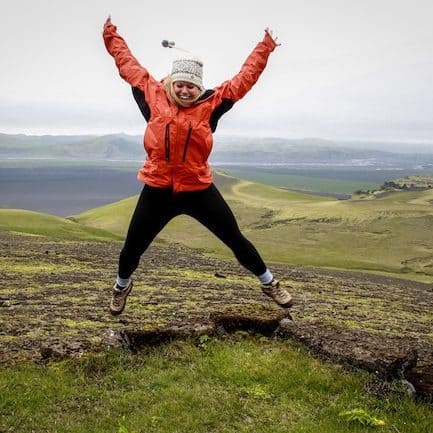 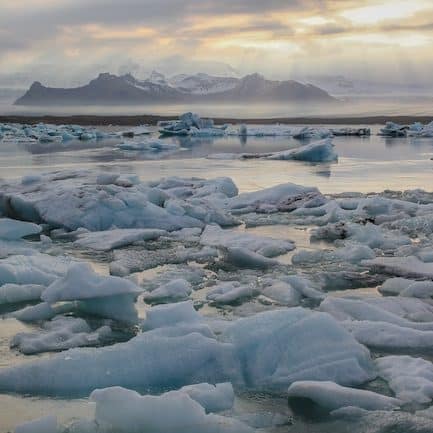 My introduction to Iceland can only be described as epic. In fact, all…Read More 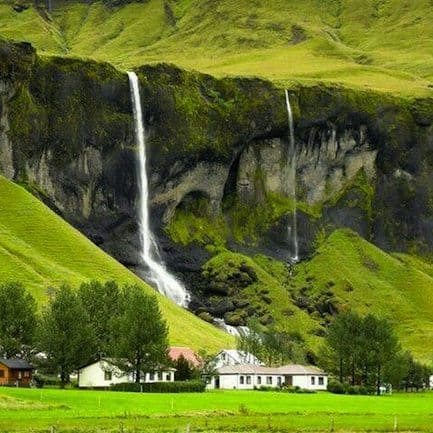