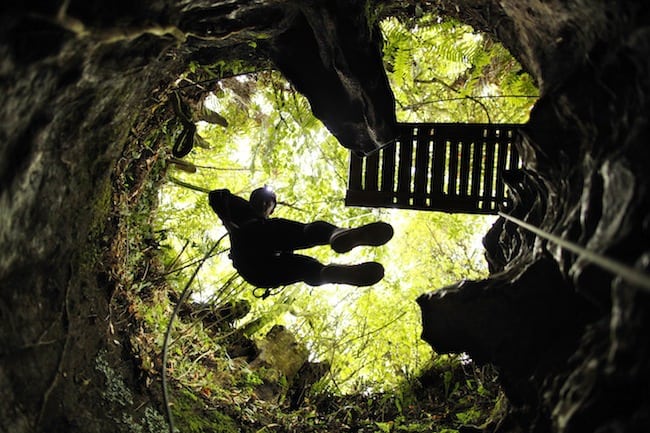 If there was one thing I was looking forward to doing in New Zealand this year, it was visiting Waitomo and getting to see the famous glow worm caves.

Waitomo has been on my mind for as long as I can remember, ever since I saw this viral photo pop on Pinterst over and over again. Tucked away up on the North Island, I knew this would be my first big New Zealand adventure.

And boy was it memorable! Hands down, it’s the coolest thing I have ever done, but let me get to that in a minute. 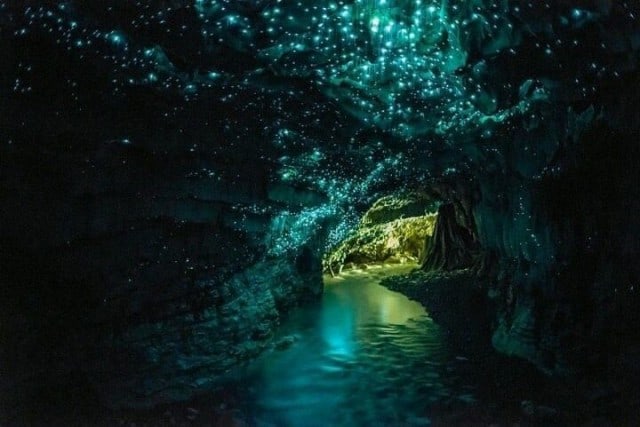 So the Waitomo Caves are a massive cavern complex, and there are all sorts of activities and tours you can get up to in them. Looking to get adventurous and just a little bit dirty, I opted for the more hands-on approach and decided to go all out with the Legendary Black Water Rafting Co.

The “it” activity in the North Island, I knew I couldn’t miss out. But then I had to decide which adventure tour to go on. Decisions, decisions.

Ever since my hectic last summer and injuring my back in Jordan, I’ve been much more hesitant about the adrenaline sports I go on, i.e. I’ve become complacent. And I didn’t like it. 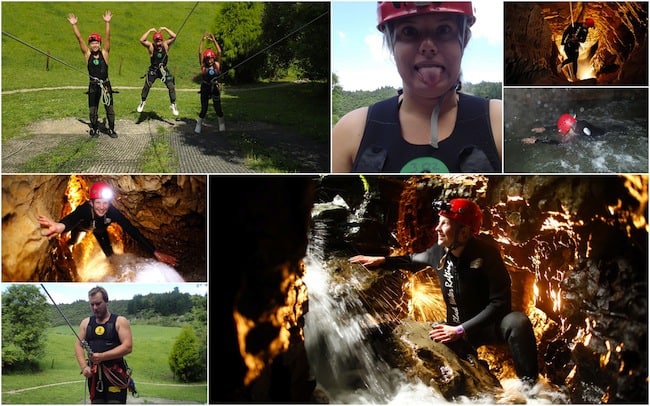 I could go on the intro one that didn’t look scary at all, with only one small jump OR I could go on the 5 hour Black Abyss tour with rappelling, ziplining, climbing waterfalls and god knows what else.

Sigh, time to start challenging myself again and stop being a wuss. Number 2 and into the abyss!

After booking a spot with Waitomo’s first caving company, the Legendary Black Water Rafting Co., I mentally tried to prepare myself for the big day.

Focus on the glow worms Liz, and not falling on your back. 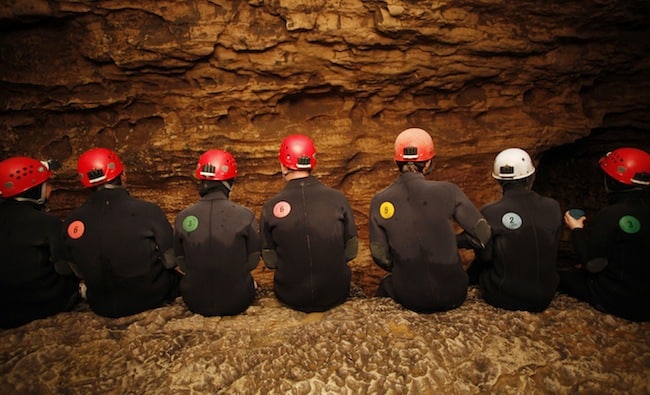 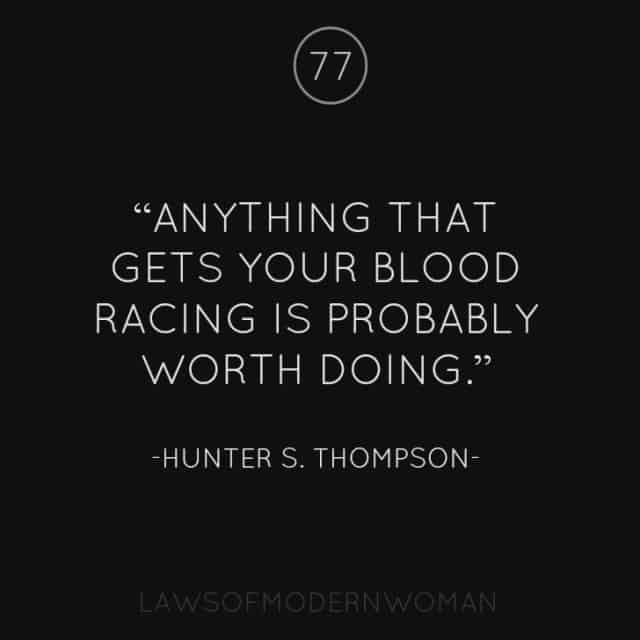 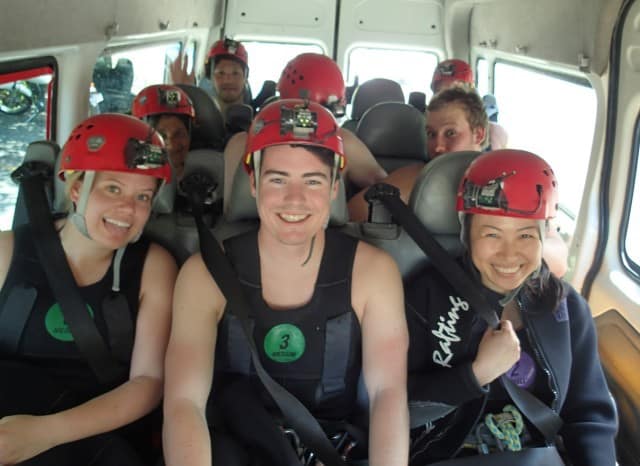 I wish I could ramble on here about how excited I was, how pumped up I was, how much I knew this was going to be the best thing I’d ever do in New Zealand, and while I did feel that way partly, I was straddling two complex emotions – excitement and fear.

You see, I was nervous. Really nervous. I felt like this was the test to see if I could find my adventurous side again in New Zealand. And there was nothing I wanted more than to move past this. 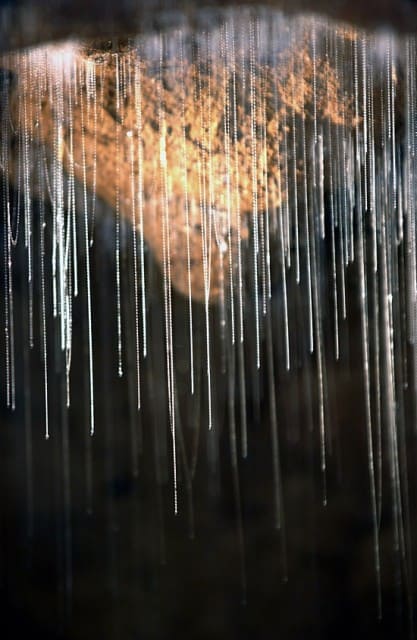 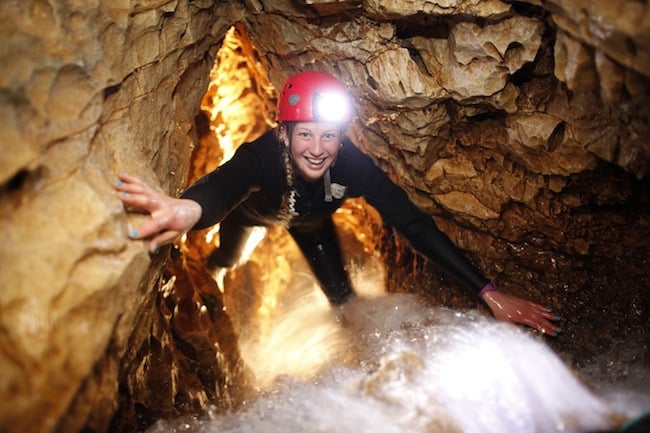 I kept thinking back to canyoning in Switzerland last summer, and just how challenging it was for me. I felt like caving in Waitomo would be a bit similar in terms of testing myself, literally and physically taking a leap of faith or two.

I was determined to see those glow worms, and not dry and comfortable from the back of a boat either.

This would be my chance to really overcome that fear and get started off in New Zealand, the adventure capital of the world, on the right foot. 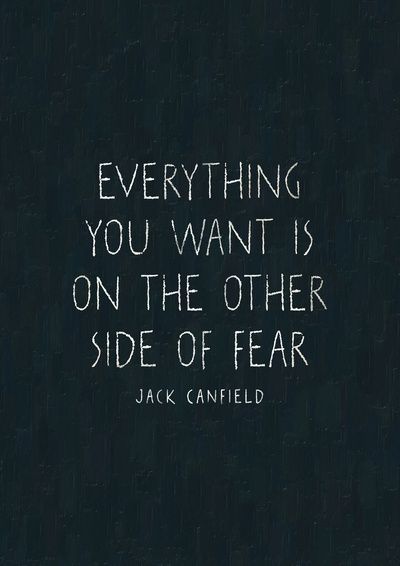 Lucky for me I ended up with the coolest group of people in the caves, and the guides were all young, fun and energetic, exactly the kind of combination you’d wish for on a tour like this, especially if you’re nervous.

Our bonding started in the changing rooms where we had to help each other yank the thick wetsuits on. Nothing says hello quite like pulling up someone else’s pants, am I right?

After a quick lesson in rappelling (abseiling for my non-Americans) we climbed out on a little wooden platform looking down into a 100+ foot hole in the ground. Yikes! 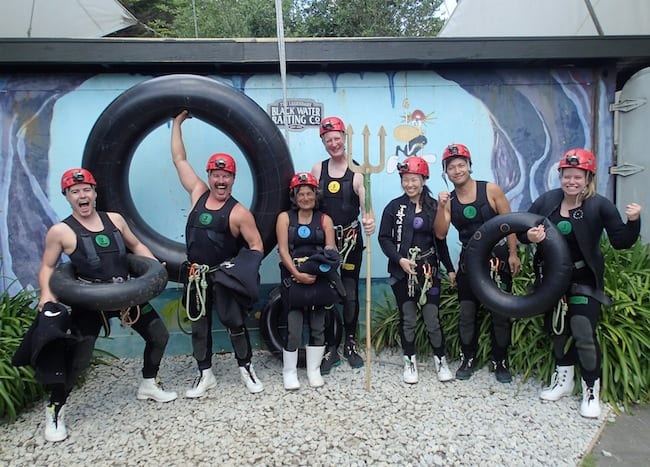 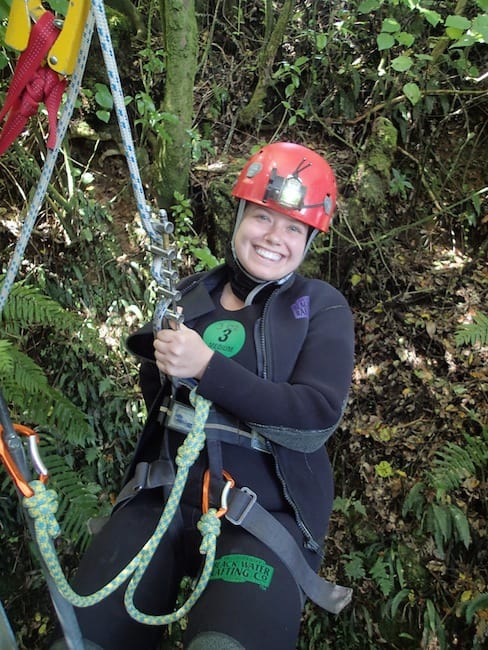 Slowly lowering myself down a hole, I tried to channel my inner adventuress. It was actually so much easier than it looked, maybe because you couldn’t see straight to the bottom and it was pretty narrow. Bouncing my feet along the walls and letting out the occasional “weeeeee” and “yipeee,” it was all too soon when my feet hit the bottom of the cavern.

Clambering down a ladder, I joined a few of our group on a rock waiting for everyone else to make their way down. Getting me excited they told me to flick my headlamp off. Adjusting to the darkness, I glanced up and was astonished.

Hundreds of tiny blue dots twinkled on the ceiling of the cave. It didn’t talk long for me to drift off deep in thought, imagining we were in some other lost world, with blue stars in the sky.

Drip, splat. Something wet landed right on my face. Back to reality. 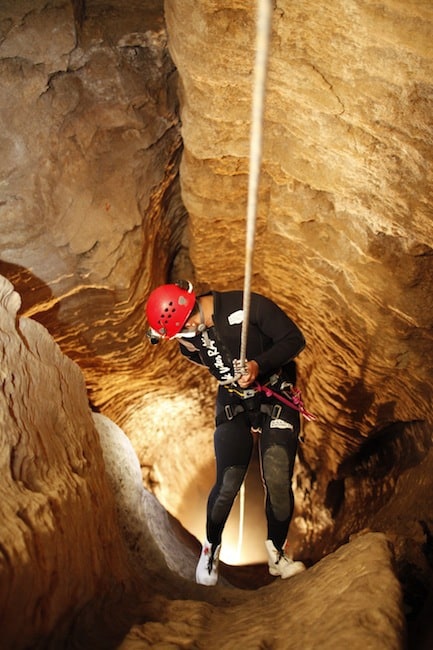 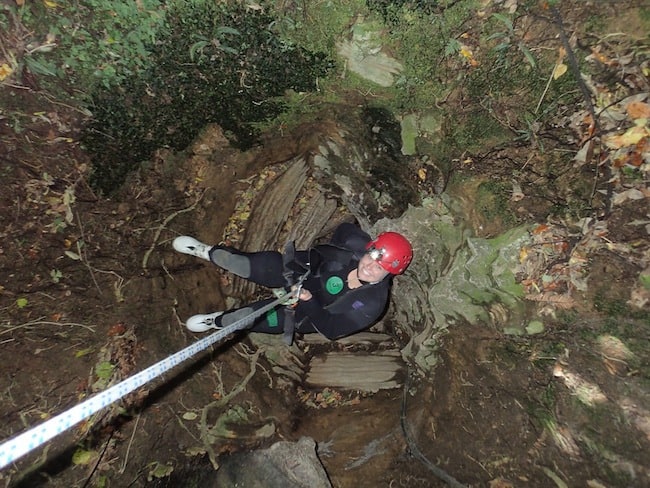 Wandering around the caves was incredible, and as it turned out, one of my favorite parts was a huge zipline they rigged down the cavern. Flicking off my headlights, taking a deep breath and lifting my feet off the ground, it felt like I flew through the caves underneath the sparkling blue glow worm lights. What an introduction!

Oh, and as soon as they let me go, I heard a loud yell of “Oh no! Ooops!” as I was whizzing through the air screaming. Got to love a guide with a sense of humor!

Happy to have survived, the rest of the trip felt like we were underworld explorers, getting to see a part of the world few have the opportunity or the cojones to do, which in a way is true. 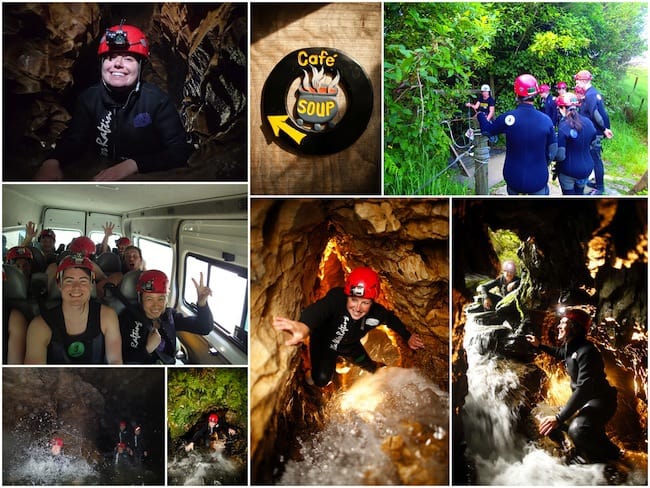 By the time we arrived at a high ledge overlooking green water, I knew this was where the wetsuits came into play. Nomming on some homemade biscuits and hot drinks the guides had brought with them, I didn’t even have to give myself a pep talk.

The rush from rappelling into the cave, the zipline down and the hundreds of thousands of magnificent glow worms already gave me such a buzz; I was excited to see what was next!

Bit by bit the fear that gripped me earlier started to drift away, slowly replaced by happiness, exhilaration, and the feeling that I was overcoming an obstacle in an surreal place. 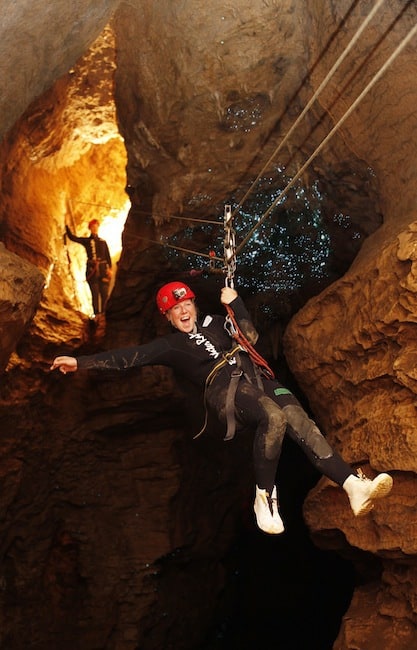 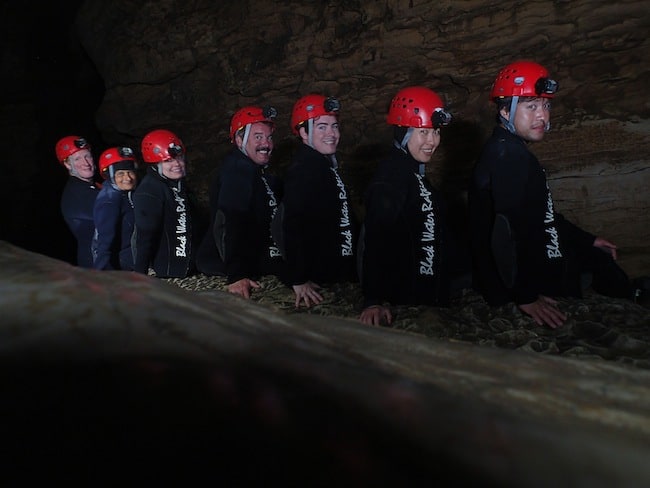 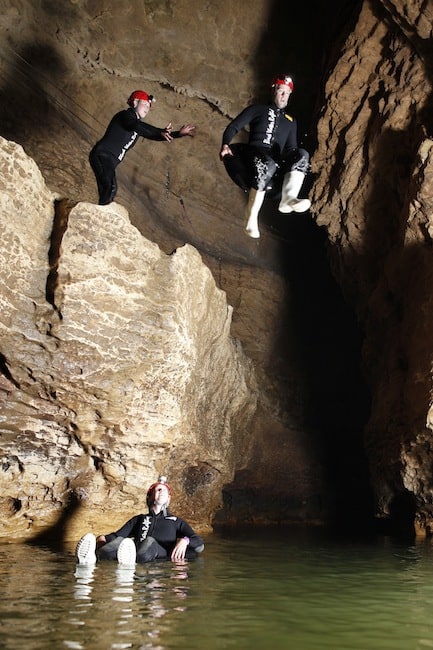 Grabbing an inner tube, I stood at the edge of the platform looking down. To me it seemed like a 20 foot fall when in reality, it wasn’t that high. After canyoning, jumping into shallow water freaked me out, but after a deep breath, holding the inner tube under my butt, I flung myself off.

Splash! Now things were going to get interesting!

The next few hours passed by in a rush of perfect memories and exhilarating experiences. Making a chain and paddling through the dark, staring up at the endless line of glow worms on the cavern ceilings is not something I’m likely soon to forget.

Seriously, how can such a place exist?! 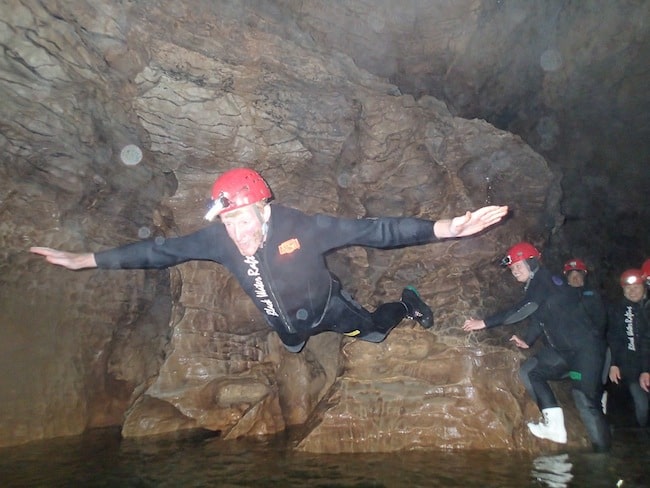 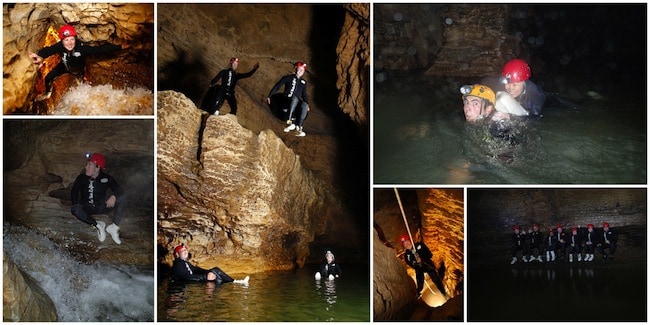 Every time we were offered an opportunity to try something fun or adventurous, I made myself do it. From squeezing through tunnels so tight I had to wiggle sideways with my arms over my head to get through to sliding face first down a ramp, I went for it.

And every time I felt my confidence and smile grow bigger.

As we neared the end, I knew my biggest test was yet to come. Climbing out two gushing waterfalls without ropes. As soon as I glanced at them, doubt began to creep back into my mind. They seemed too big and I felt for sure as soon as the water hit me, I’d fall backwards on my back. Shudder.

Luckily the guides had faith in me, pointing out natural handholds and footholds to grip onto, and occasionally giving me a shove if I needed one. So by the time I reached the tops of both waterfalls, it truly felt like I had conquered the world, or at least the underground world. 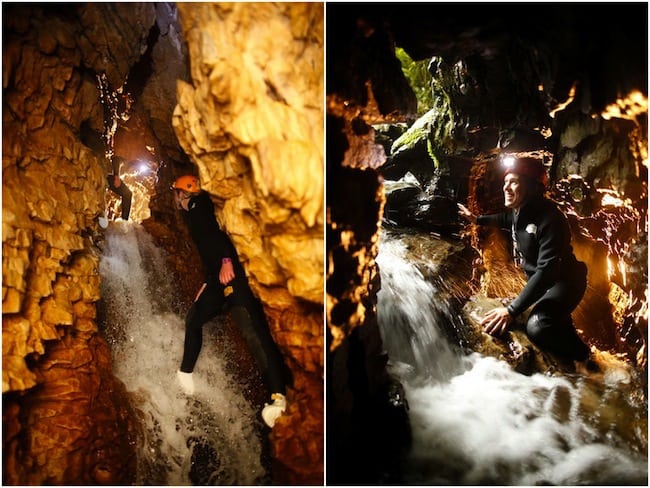 For me, Waitomo represents so much more than an adventure activity in New Zealand. It was a turning point for me to learn to reconquer my doubts and fears, try something I wasn’t necessary comfortable with (I mean have you worm a wetsuit before? So uncomfy!) and then come out literally and figuratively on top. How awesome is that?

Apart from that, I have absolutely no qualms saying this was both the coolest and most satisfying thing I’ve ever done in years of travel on the road. And I don’t say that lightly, I really don’t.

Have you ever gone caving or underground? Have you ever conquered your fears on the road? Would you like to visit the Waitomo Caves one day? 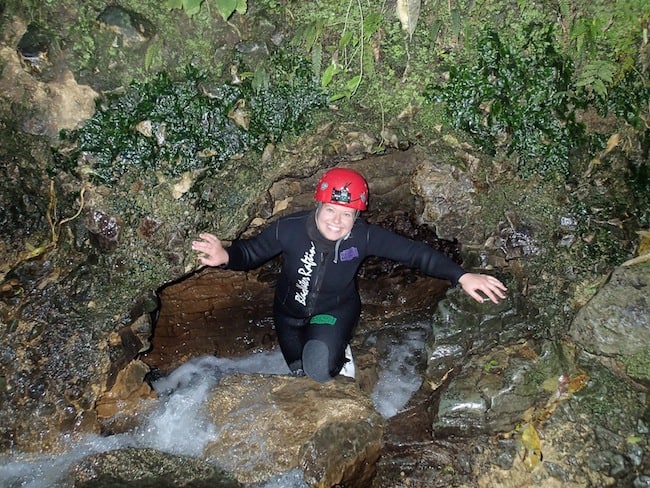 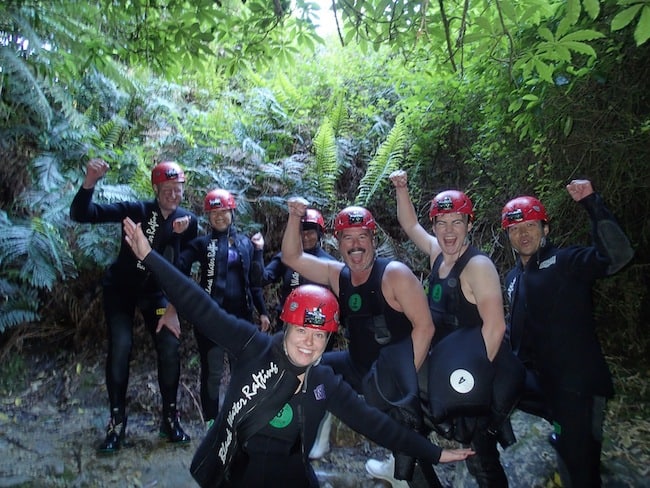 Many thanks to the Legendary Black Water Rafting Co. for both sharing these photos with me and hosting me in Waitomo and letting me join in on this epic day. Like always, I’m keeping it real – all opinions are my own – like you could expect less from me!

Written by Liz and was published on January 15, 2014 in Adventures, Destinations, Get Inspired, New Zealand

73 Comments on “Getting Adventurous in the Waitomo Glow Worm Caves” 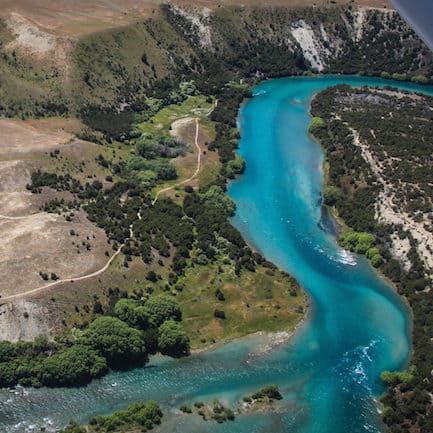 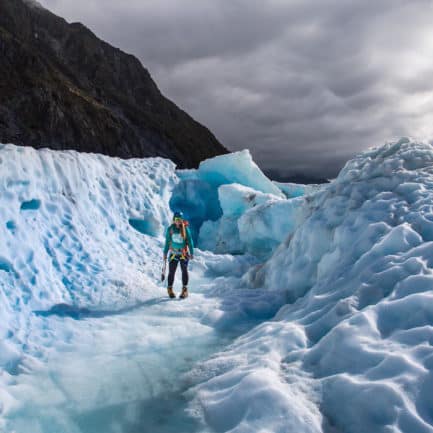 Getting Extreme on Fox Glacier

Ok, so I have a lot of favorite places in New Zealand. I…Read More 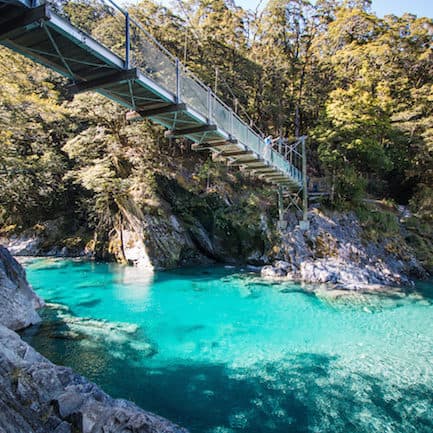