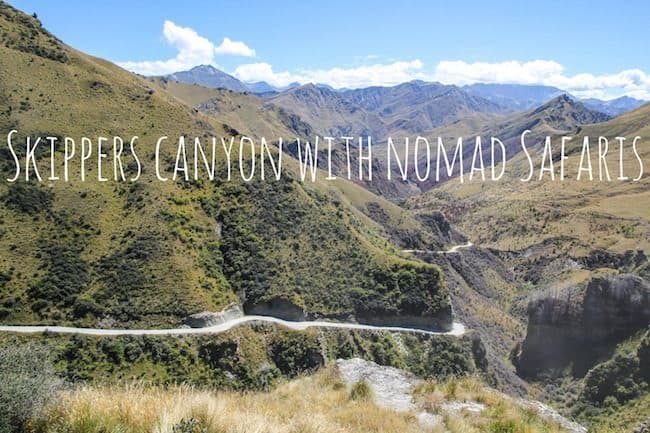 I love a good road trip, what about you?

One of the greatest things about living on the South Island of New Zealand is that there is no shortage of epic, awesome adventures right on your doorstep. The other great thing about living in Wanaka and near Queenstown (only an hour away) is there are so many adventures to chose from. They are unavoidable.

Because this part of New Zealand is so popular with tourists, that means there are plenty of super famous activities to chose from, like bungy jumping, skydiving, jetboating, ect. You name it, they have it. Many of those activities don’t always appeal to me because I see them so often; I prefer hidden gems.

Luckily, there are so many layers to peel back and discover in Queenstown, there is something for every kind of tourist. 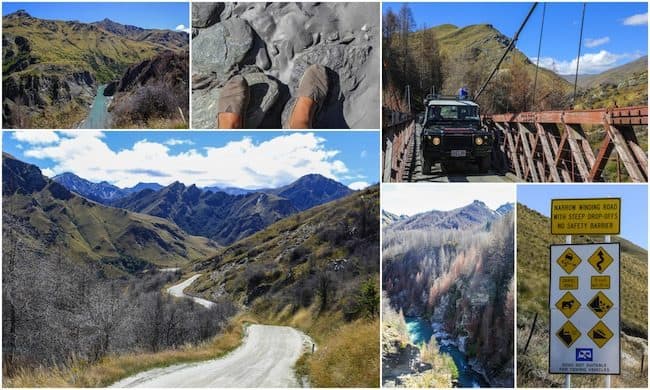 I am not sure where I heard about Skippers Canyon for the first time, but I’ve had the idea of exploring there tucked away in the back of my head for over a year now. I’m so happy I finally found my chance this summer.

This is definitely one of Queenstown’s best-kept secrets, and I probably face the wrath of some locals for sharing it on here, but I can’t help myself. You guys are cool right?

Basically Skippers Canyon is a scenic gorge with a pretty gnarly dirt road along the Shotover River that once led to a gold mining town. Even though now it only leads to a few forgotten farms and historical sites, it’s still one of the most beautiful roads in New Zealand. And also one of the most dangerous. 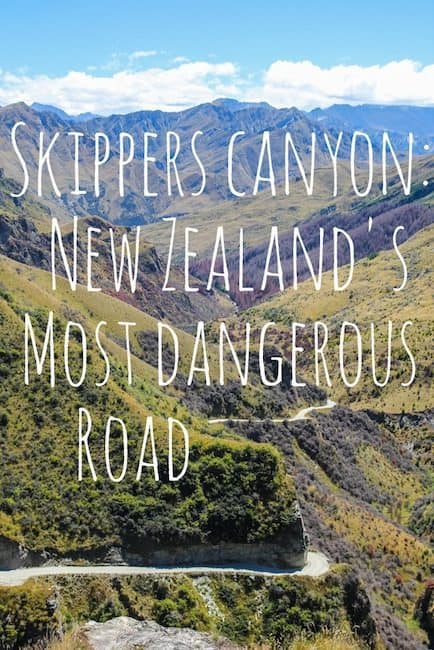 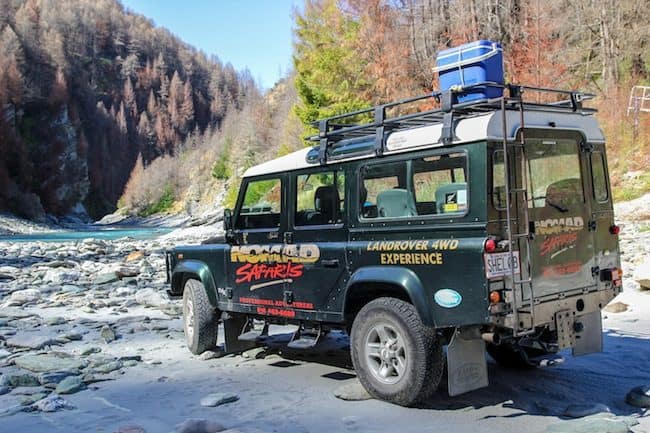 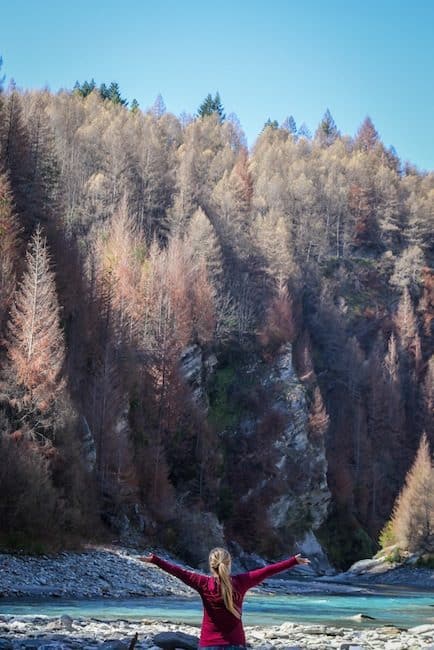 While it is a public road, I knew there was no way my crappy little Volkswagon would ever make it out there, or that I felt comfortable driving it myself. It’s one of the only roads in New Zealand where rental car insurance isn’t covered. It’s wide enough for one car and with huge cliffs that drop off, you definitely need a head for heights to drive it.

Luckily Nomad Safaris, a 4WD adventure company based out of Queenstown goes here regularly. I knew I wanted to hit up their Skippers Canyon tour this summer and see what the fuss was about and discover one of Queenstown’s secret spots myself.

Only an hour from Wanaka, it’s an easy day trip for me. I love heading over the hill to the “big city” for a day. 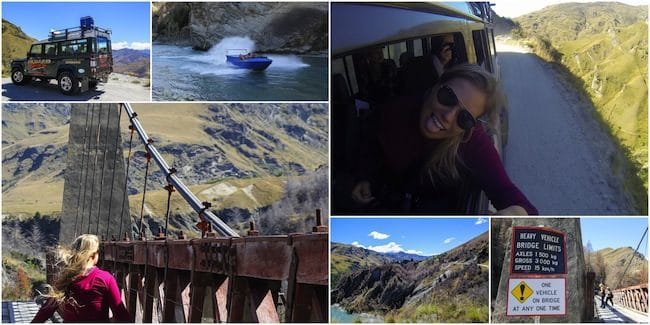 After getting picked up downtown in Shelob, our Landrover for the day, we were off headed up the road to Coronet Peak, one of the local skifields and where the road to Skippers Canyon starts. Nomad Safaris do many of the Lord of the Rings tours around Queenstown and each of their Landrovers in the fleet is named after a major character.

I suppose being in Shelob meant that we have nothing to be afraid of, right? Right?! 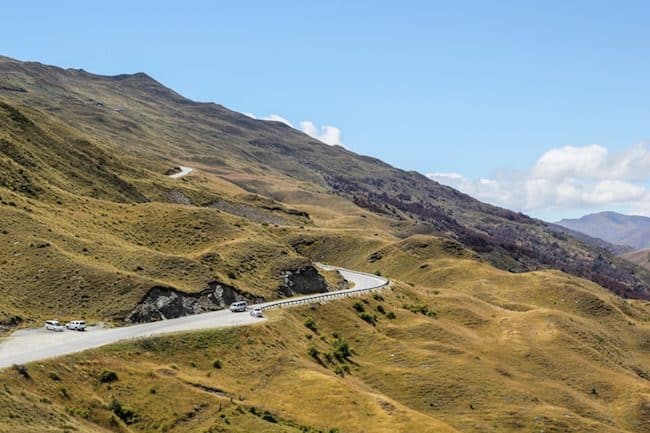 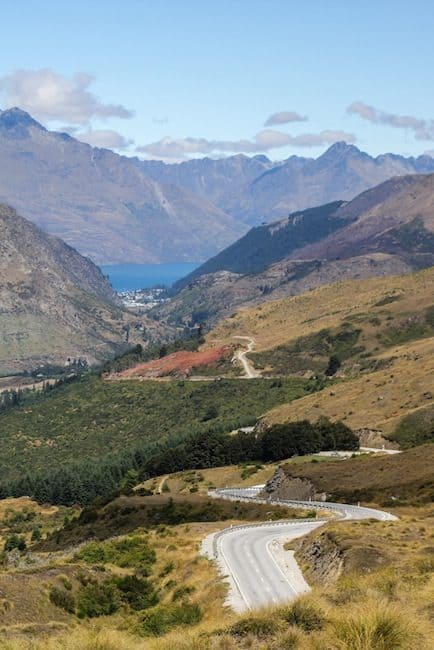 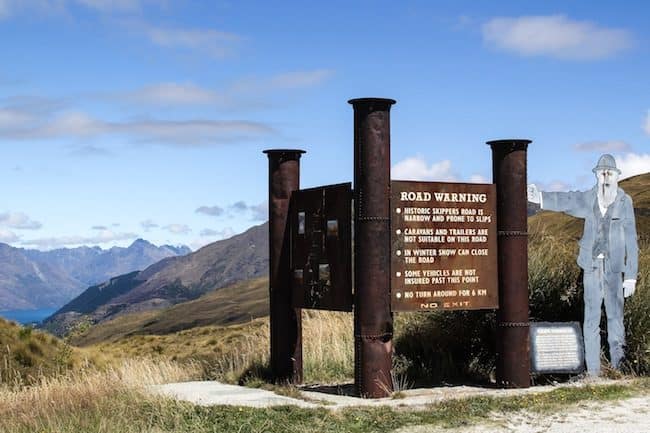 It was one of those perfect blue sky, hot summer days on the South Island, with blue skies and dry wind blowing off the lakes to keep you cool when you need it. Any nerves I might have felt quickly disappeared after a few minutes riding along with the driver who grew up on one of those farms that dot the road in Skippers Canyon.

As we started down onto the road into Skippers, I couldn’t help but start snapping a million photos out of the window, it was just so scenic! It really felt like I was in Middle Earth, nerd alert!

Soon we stopped for a view high above the winding road and I really got a taste for what we were in for. I could see the white dirt road snaking far below us, with two white water rafting buses headed straight towards each other! It was almost comedic watching them get closer and closer until they finally saw each other and one had to reverse back the other way. I hope that wouldn’t be us soon! 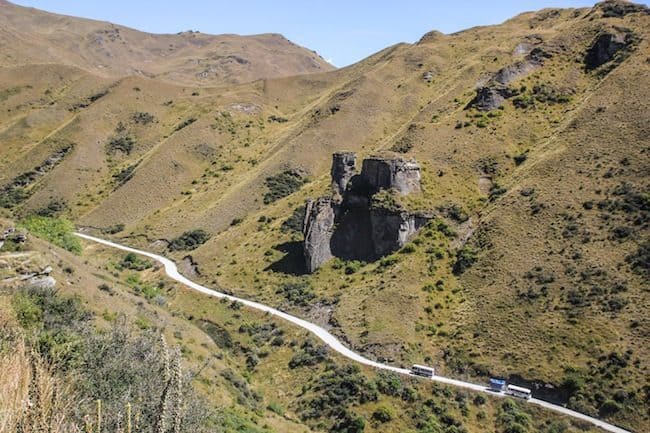 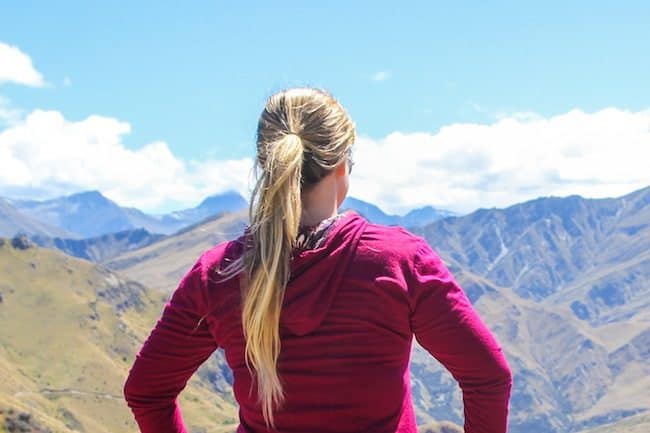 Pretty soon I started to see what all the fuss was about. The road is basically just wide enough for one car with some pretty huge cliffs on the side that drop straight down to the river below. Still you couldn’t keep me from hanging my head out of the window with my GoPro trying to capture the sheer height and beauty of such a remote road.

Not gonna lie – I was maybe a tiny but scared. But at least I was safe in the knowledge that I would receive adequate compensation should any accidents have occurred, which, thank God, did not turn out to be the case! My travel insurance plan is with World Nomads, which I 100% recommend for adventure travelers. 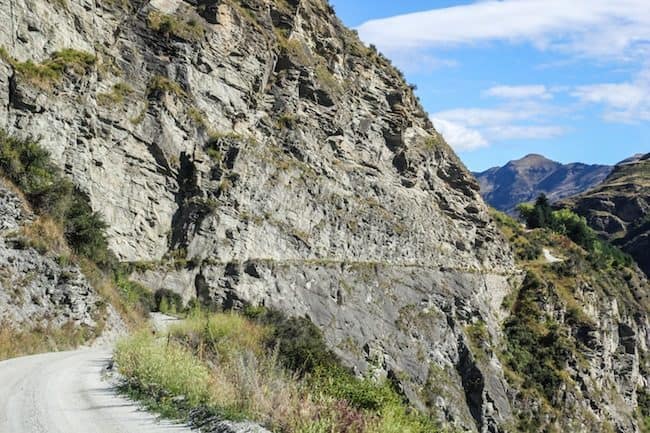 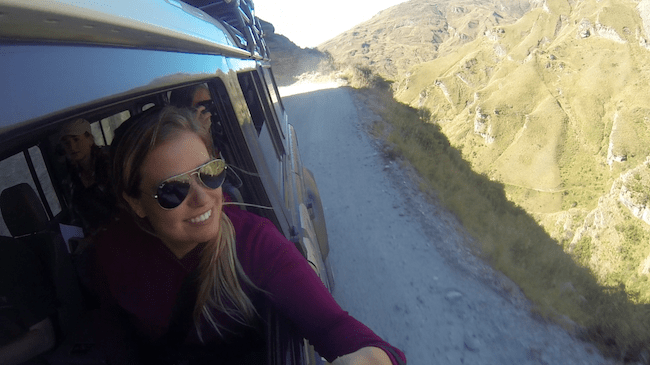 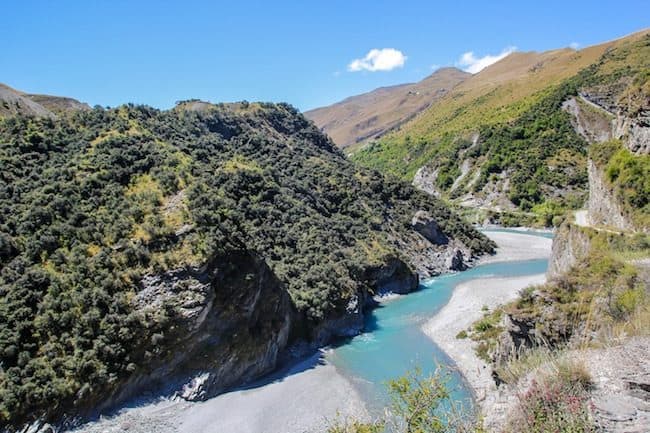 The South Island of New Zealand is pretty unpopulated nowadays, with the majority of people living up north. It is a bit weird to think about considering down here especially near Queenstown is where the fuss is all about.

What’s weirder still is to imagine that over a hundred years ago, this wild and remote part of New Zealand was much busier, packed with thousands and thousands of people who came during the gold rush.

As we trundled along this steep road I couldn’t help imagine how the HELL anyone built this road over a hundred years ago, or the fact that people made the journey before there even was a road! Talk about inspiring! 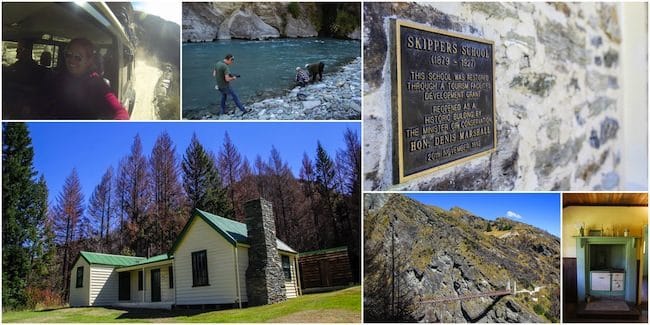 After driving for a while we crossed an amazing old suspension bridge high above the river before climbing through the trees and popping out at Skippers Point. Perfect place for afternoon tea!

In the middle of the woods is a well-manicured lawn with a few historical buildings that are open to the public including the old Skippers school. Filled with old photos it shows you what life was like back during the boom in Queenstown.

But what is even more bizarre to imagine is the fact that there used to be over a thousand people living out in Skippers Canyon, with even a couple of hotels. Standing there now, it’s such a place of solitude and peace and quiet, it’s a bit weird to imagine it jam-packed with miners. 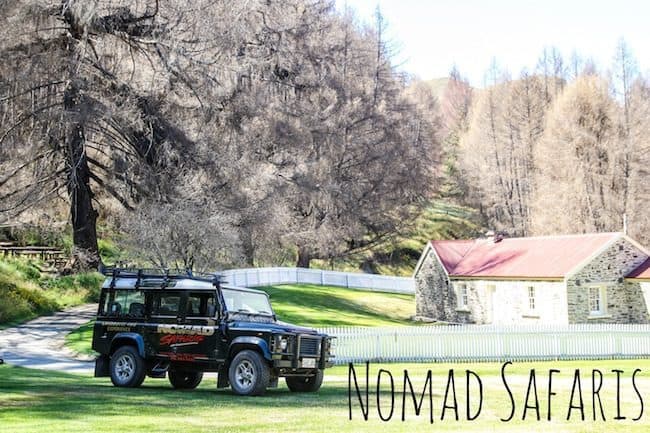 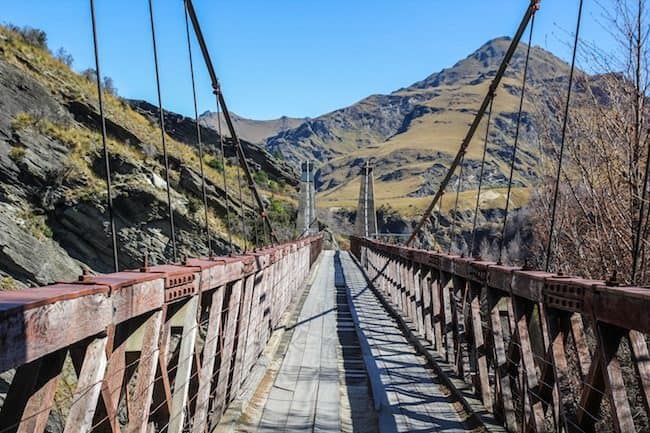 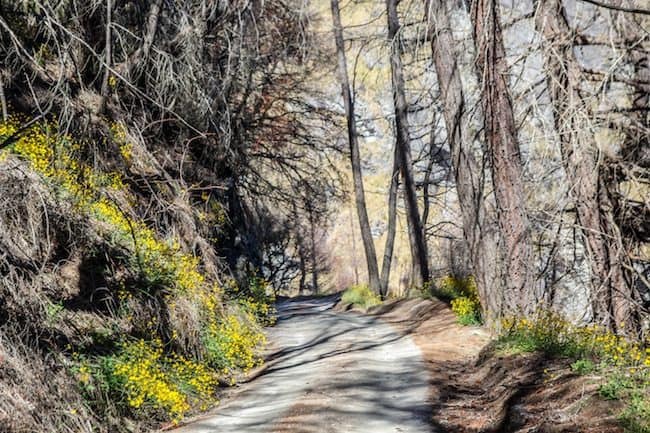 On our way back out of Skippers we headed down to the riverbed to pan for some gold, which surprisingly actually worked. We left with a few flakes tucked away for safe keeping.

But what interested me more than gold was the fact that it was also a recognizable Lord of the Rings location. Cue fan girl moment!

Along the river bed was the same spot where Liv Tyler was chased on horseback by the black riders in the first film as she was carrying an injured Frodo to Rivendell. So exciting to see it in real life! 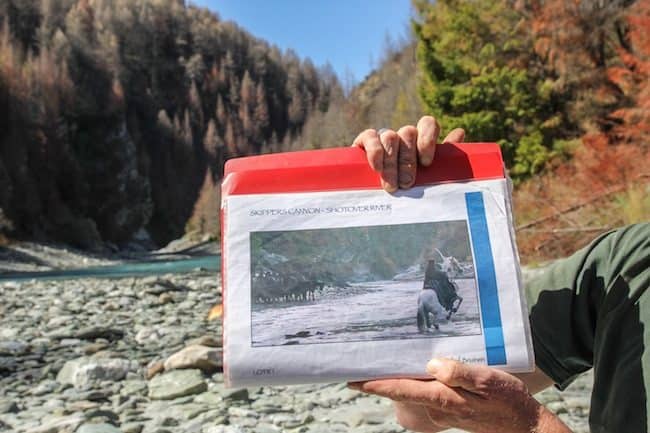 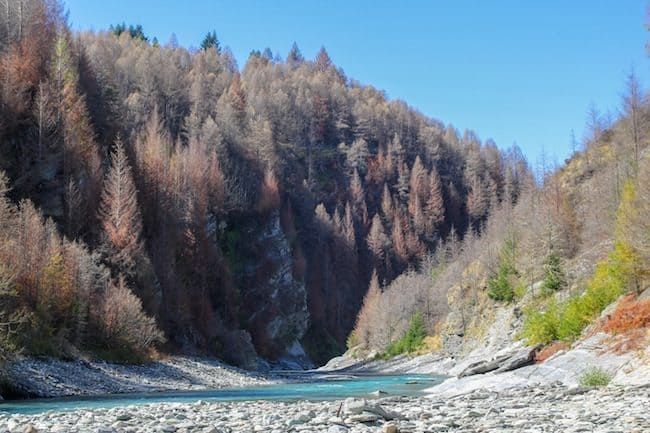 After I drove everyone insane with random outbursts of quotes from the books, we eventually piled in the back of Shelob and headed back towards civilization.

I love that Skippers is both undiscovered and accessible at the same time. If you are looking for a bit of adventure, kiwi culture and to get off the beaten tourist trail in a popular part of New Zealand, don’t miss it.

What’s the craziest road you have ever driven on? Would you like to check out Skippers and explore a different side of Queenstown? 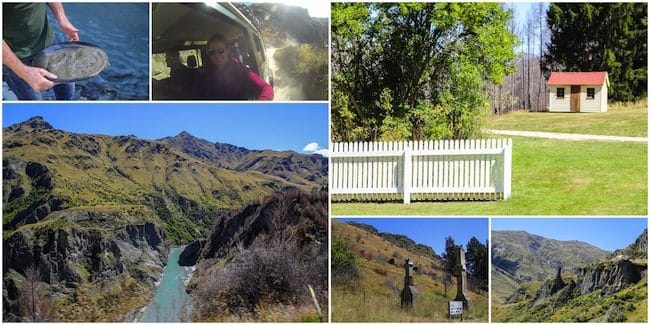 Many thanks to Nomad Safaris for hosting me on their Skippers Canyon tour. Like always I’m keeping it real, all opinions are my own, like you could expect less from me!

Written by Liz and was published on March 15, 2015 in Adventures, Destinations, New Zealand 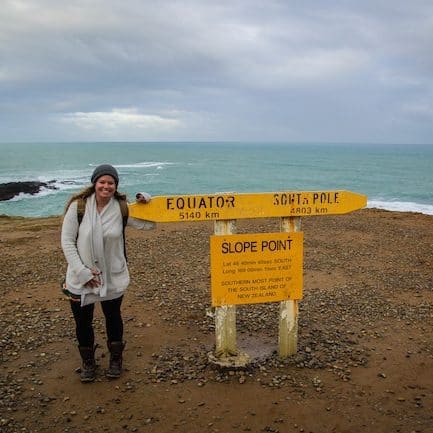 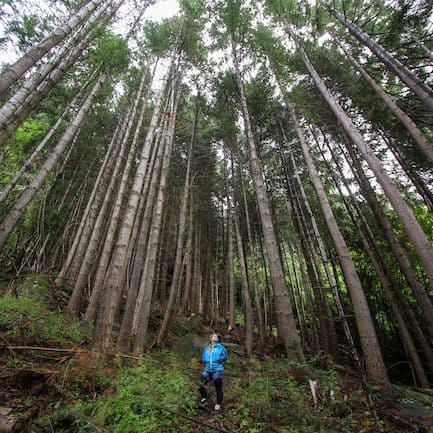 So things have been a little quiet on the blog front. I've been…Read More 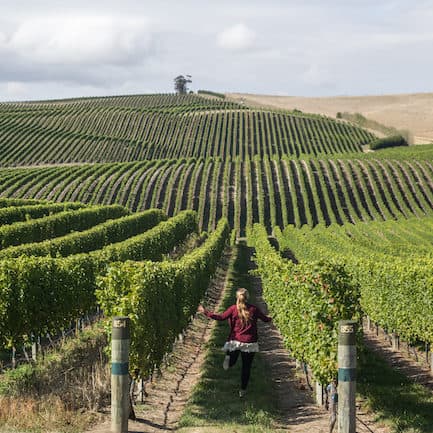 At the end of last summer, I found myself on two separate, epic…Read More
More travel stories