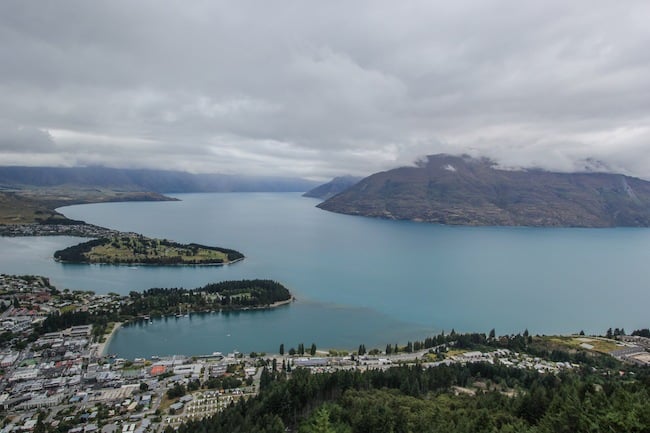 If there is one place in New Zealand that gets loads and loads of attention, it’s Queenstown.

And for a good reason. Queenstown is pretty much the queen of New Zealand. Proudly lording over all other towns and cities, nothing quite holds a candle to this majestic city in the mountains on the South Island. Surrounded by a mountain range called the Remarkables *might* give you some indication of just how remarkable this little city is.

Queenstown is stunning. Queenstown is fabulous. Queenstown looks fake. Any adjective that conveys profound beauty combined with jaw-dropping awe and excitement can be used to describe this place. 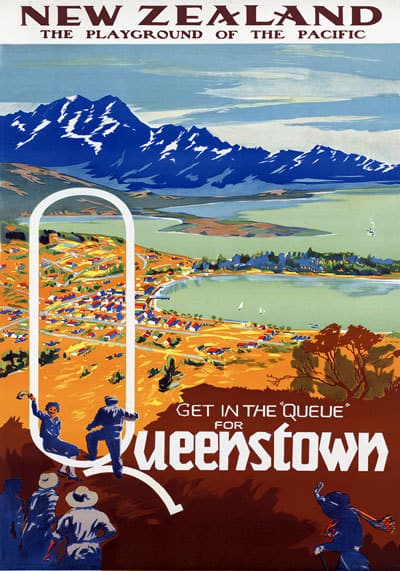 In fact, it didn’t take long for me to realize the appeal of Queenstown when I stepped off the Haka Tours bus there in Christmas. And to be honest, I actually realized it LONG BEFORE we even got to Queenstown. Just driving there will blow your mind. In a good way.

And as much as I am inclined to be wary of cities that get a lot of hype and attention, I was still really excited to get to see Queenstown for the very first time. It helped that it was Christmas Eve and the city was alive with excitement.

I also rang in the holiday properly, starting with Christmas Eve beers on the beach with Amy and Jerrica (Writing and Wanderlust) one of you guys who reached out to me to let me know she was traveling in the area. As with so many times meeting up with fellow travelers, readers and bloggers, it didn’t take long for me to realize we were long-lost twins, bonding over just about everything while watching the sun set over Lake Wakatipu. 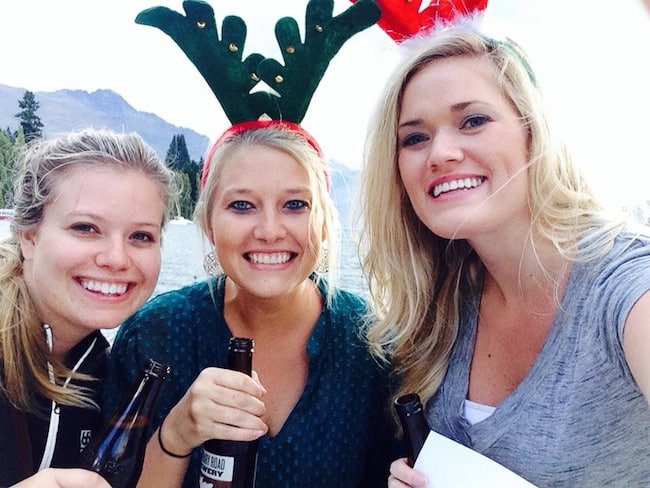 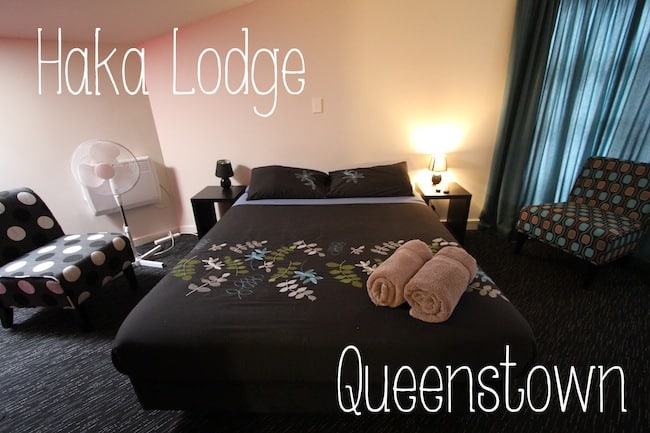 Of course it didn’t end there, and in a rare fit of acting my age, I went out with the Haka group exploring the fun bar scene around town and singing Christmas carols before going for a midnight swim in the lake. Yolo.

Christmas Day dawned bright and painful in the awesome Haka Lodge Queenstown, where we spent two fabulous nights. Just like the tour itself, the values of the Haka Lodges are more like luxury hostels, with handcrafted wooden designer bunks, tables, comfortable hang out spots, and of course, little touches here and there that make the difference in accommodation.

Oh, did I mention waking up with a little Christmas present outside my door? Love. 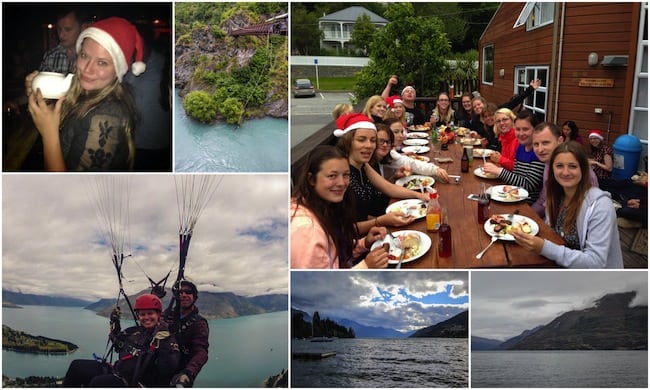 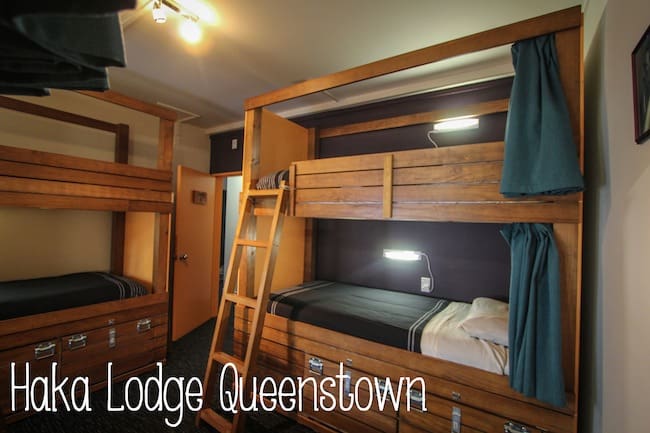 Christmas was spent on the most epic day trip possible – sailing around Milford Sound before heading back to the Haka Lodge for family dinner, secret santas and exploring more of Queenstown.

When I announced I was going on a 2 week tour of the South Island with Haka Tours, I asked (begged) you guys to help me choose one of the adventure activities to join in on.

Paragliding over Queenstown won by a landslide! 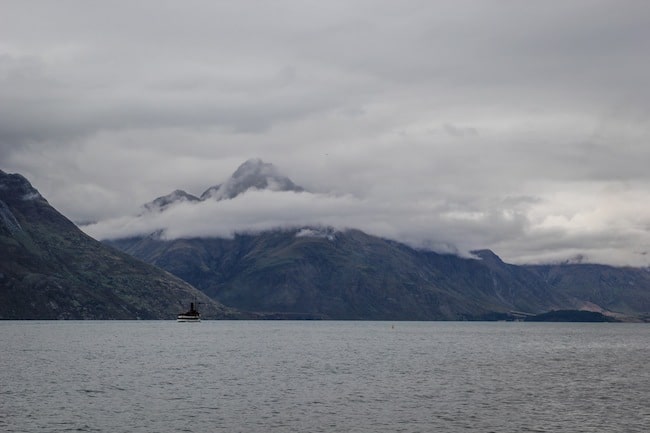 Now I’ve never been paragliding before, so I was keen to give it a go. And my god, what a place to break it in too!

I had seen lots of photos of Queenstown from high above at the top of the gondola ride, but to have the chance to see it from the skies I knew would be unforgettable.

Unfortunately, Boxing Day was rainy and cloudy and from what I heard, paragliding would be a no-go. Sadness. 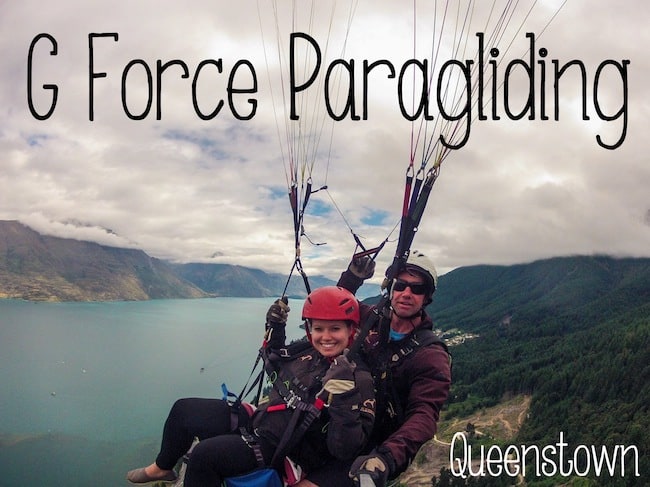 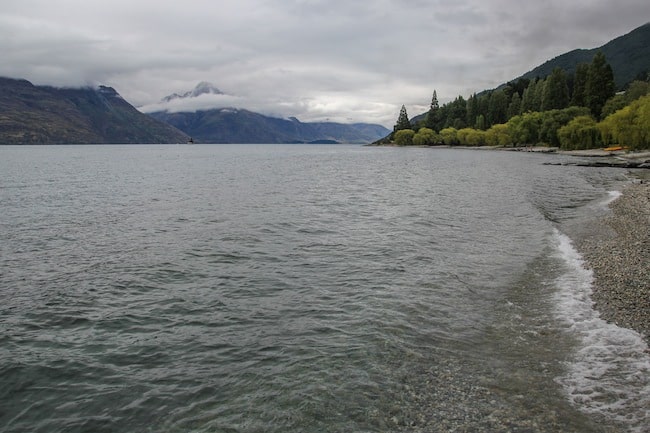 Fortunately for me, by the time I caught the gondola to the top of the mountain to explore, the clouds had lifted and the weather improved enough that G Force Paragliding was just reopening! Unfortunately for me, I was wearing a dress and my TOMS. Not exactly optimal clothing for flights. Oh well!

Within what felt like the span of 5 minutes, I was strapped in and ready to go. Of course, being me, I start going, “what about this strap? And here? Are you sure it’s tight enough? What if the parachute cords get tangled?”

Sometimes I think I turn into my mother more and more everyday. 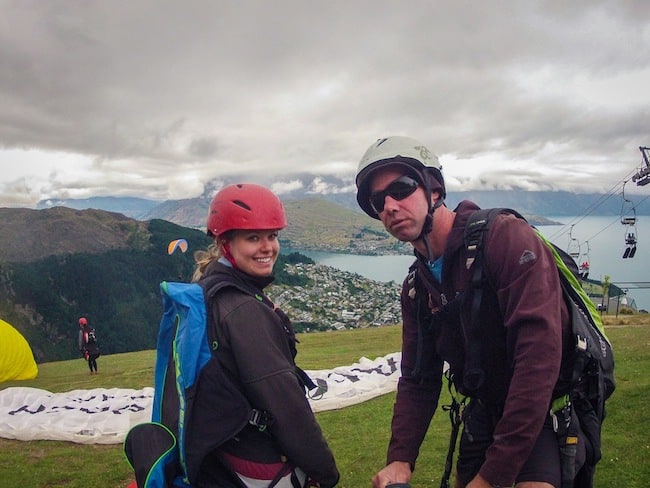 And in an even MORE typical move of mine, I literally took two steps after the guide and fell down. I should add this was NOT when we started running off the edge of the mountain to fly, this was just me walking on the wet grass.

Convinced all the kids in the chairlift up were pointing and laughing at me as they headed to the luge, I was more than ready to get started.

Where do I run? 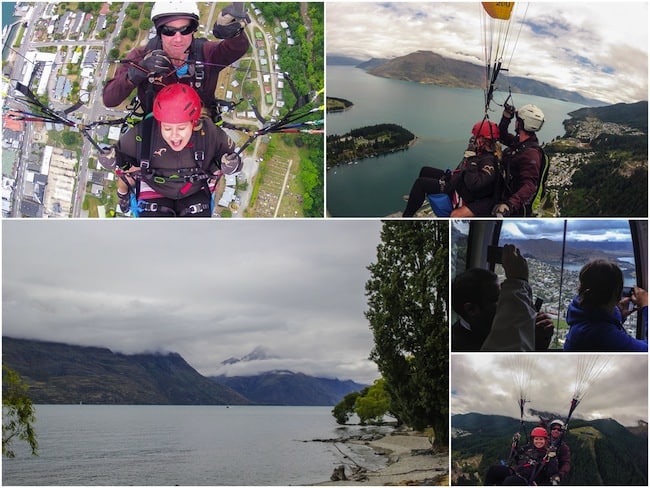 Lining up on the edge of a very big hill or very small mountain, we started to run before the wind caught us. Before I knew it my feet were off the ground and we were soaring high over the tall trees.

I was also glad to see that the view from above Queenstown is even better than I imagined! Can I even capture into words what it’s like to look down in between your feet and see a city? To look out on to the horizon and see the bright blue lake and sharp mountains?

For me paragliding is the closest I’ve ever felt to flying, getting to experience the world from above like a bird. The weightlessness. The calm. It almost doesn’t seem real. 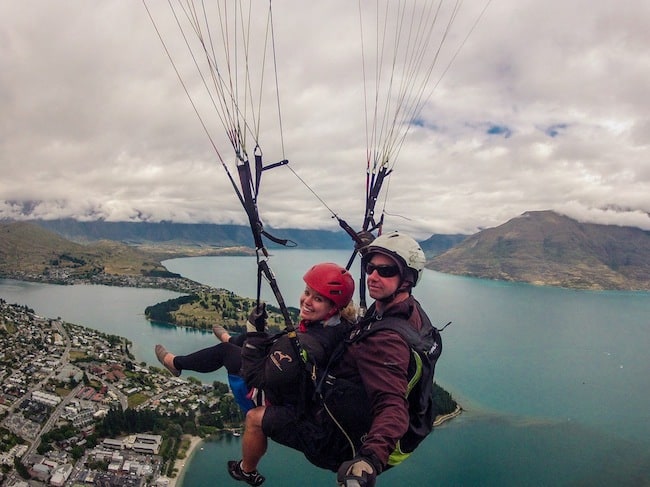 While similar to the parachute ride down while skydiving, paragliding is much more relaxed and less adrenaline-pumping. It’s an activity for anyone.

Well, until you start doing twists and tricks, then it gets slightly more intense, and the hollering begins – if you’re me.

Queenstown is the adventure capital of New Zealand, and there are sports here for just about anyone – I think that’s why paragliding was so appealing to me, and to so many others.

My motto is – if you’re going to do something like this somewhere, you might as well pick somewhere beautiful to look at. And man, it doesn’t get much prettier than Queenstown! That’s for sure! 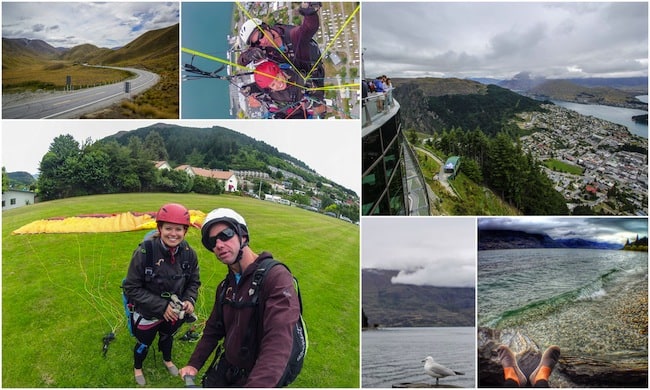 So thanks to all you guys for voting and choosing such a bomb activity for me to do in Queenstown! It was over all too soon for me, and before my feet touched the ground again, my mind was already turning and wondering about the next time I will get to fly.

Perhaps I’ll have to look into getting certified and learn to paraglide all on my own when I move to Wanaka in a few weeks – what do you think?

Have you ever gone paragliding before? Where? Would you like to visit Queenstown? 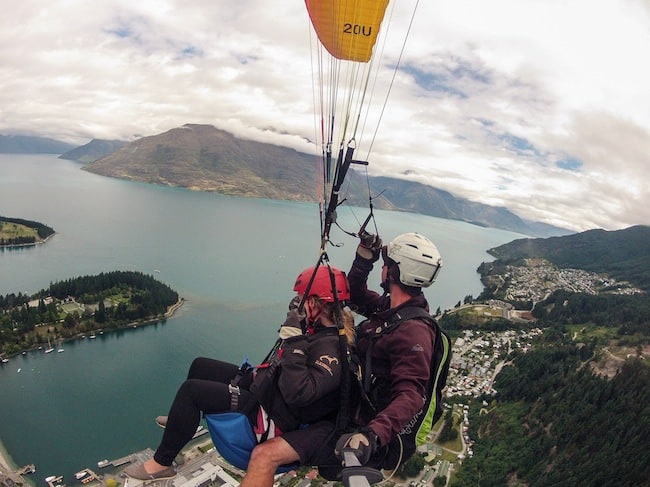 Many thanks for Haka Tours and G Force Paragliding for hosting me in Queenstown. Like always, I’m keeping it real – all opinions are my own – like you could expect less from me!

Written by Liz and was published on March 3, 2014 in Accommodation, Adventures, Destinations, New Zealand

39 Comments on “Soaring High over Queenstown” 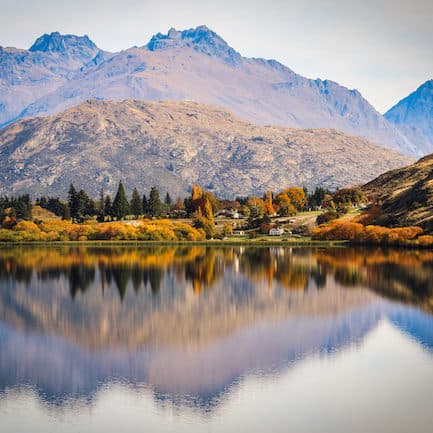 What an insane month! I'm overseas traveling at the moment but before I…Read More 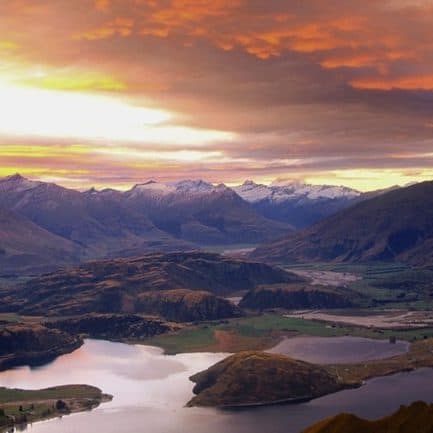 I've been keeping a big secret, can you guys forgive me? I'm…Read More
More travel stories