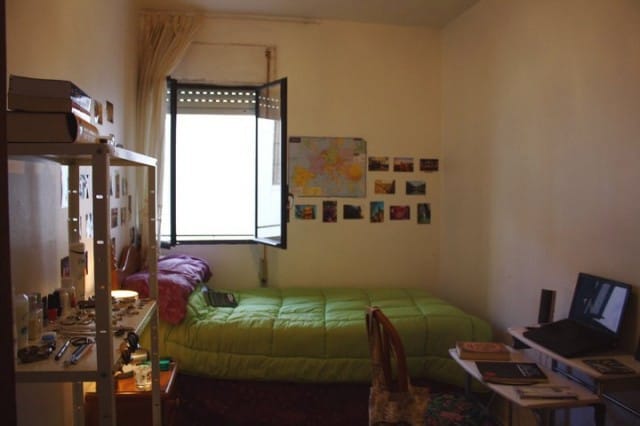 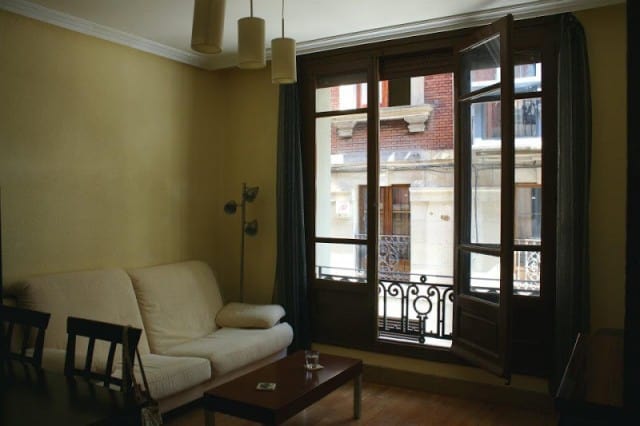 Searching for apartments in Spain!

Part tres of my key tips for future auxiliares de conversación in Spain! Have you checked out part 1: pre-departure and part 2: packing?

Finding an apartment (piso) in Spain isn’t easy, and finding an amazing apartment is just plain difficult. In my last two years here, I went from having the worst apartment to the best apartment because I knew exactly what I needed and wanted after suffering through 10 months of cockroaches, no heat, cold showers, and the loudest roommates on the Iberian Peninsula. So by trial and error, here are my tips for finding an awesome, affordable apartment here in Spain.

Searching for a piso can be tricky if your level of Spanish isn’t high; when I first moved to Spain, nothing scared me more than having to talk on the phone in Spanish! Don’t be shy, ask for help! I would suggest asking your school coordinator or 2nd year auxiliars in your town to help you calling. They might even have some leads on pisos for you! 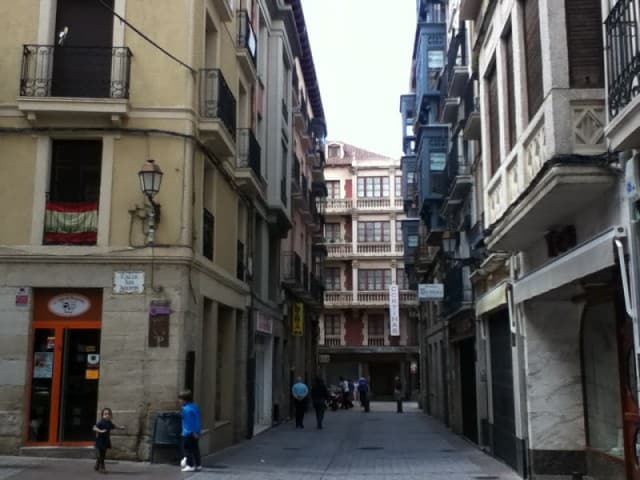 My street in Logroño

Unfortunately, Spain is NOT like the US when it comes to looking for a place to live. If only they had Craigslist or communicated mostly by email, finding an apartment would be so much easier. There is only so much you can do while you are still in the States. Most apartment searches are still done in person and over the phone in Spain. While you can send out emails to places you find online from sites like easypiso, idealista, enalquiler, don’t expect a lot of replies. This websites are a good base to start looking from and get in contract with people.

Many rental companies (inmobilarias) post on these websites so if you find something there you might have to pay a fee and sign an official contract through them. I did this last year but for me it was worth it. But most importantly, never, ever agree to an apartment you find online without seeing it in person and don’t pay anything until you have seen it yourself. Every year there are people posting in the groups agreeing to apartments they haven’t seen yet, just so they will have somewhere to stay once they arrive in Spain. Do I really need to explain why this is bad idea? 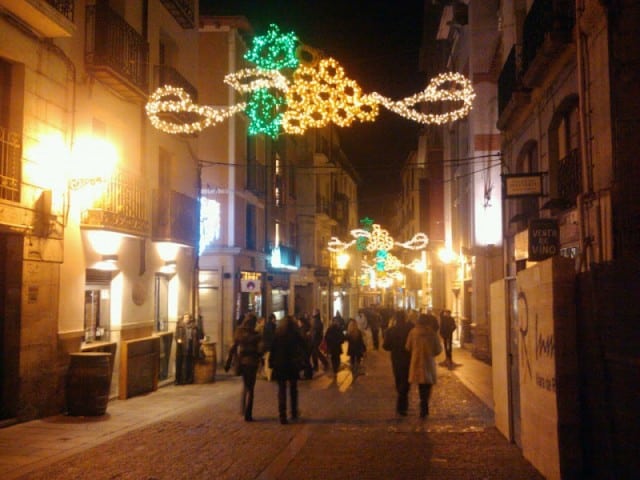 Living in the center during the holidays is so festive! Can you tell I live in wine country?

The best way is to wait until you are here and then call in person to schedule a time to take a look at the place. One of the best places to look for anuncios (listings) is at the local university, where they usually have a board pinned with numbers. Also some university websites have a page of piso listings (bolsa de pisos) where you can find a lot of stuff listed. And if that doesn’t work, go for a stroll around the area you want to live and look for ads in windows (alquilar) or posted on corners or signs.

Also bear in mind that many landlords rent by room, so your contract might just be for you rather than for the whole apartment, and then you might be able to sign it til June and not for a full 12 months. Also many people rent rooms illegally (it’s totally normal in Spain) and you don’t have a “real” contract. It is actually illegal to sublet rooms in Spain, but then again, it’s Spain, so no one really cares. This is not usually a problem unless to need to be empadronado (registered living there) for some reason, like getting a student bus pass, joining the local gym, or if you need it for certain paperwork, but even then there are ways around it.

You have to decide if you want to live alone or share an apartment. Last year I shared an apartment, and it was so horrible that I swore this year I would live alone. But this was my fourth time living in Spain, so I felt like I had already had the experience of living with people, making Spanish friends, I was already fluent in Spanish and I had already had my niche carved out for myself, ect.

Depending on what you want for the year you might want to look for a place with Spanish roommates, international or American roommates. Having Spanish roommates is a great way to improve your Spanish and meet new people/locals, though sometimes it can be a hit or miss because you are living with strangers. If this is your first time in Spain, you’d probably want to live with roommates, that way you can meet a lot of new people easily, and it helps against homesickness.

Around most of Spain, with the exception of bigger, wealthier cities, living alone with probably cost around 400 euros, give or take, while sharing an apartment will cost around 200 euros, usually less. The majority of auxiliares share pisos, since we only earn 700 euros a month. Factor in a month’s rent deposit, and you’re good to go! But trying to afford living alone in a city like Madrid would be almost impossible. I know many people who have signed legit apartment contracts there, and they are asked to pay several months rent as a deposit.

Financially, it makes more sense to share places. It can be difficult to afford to live alone on our salary, especially in big cities like Madrid. I can afford it because I have a second job at an academy plus extra private classes. I worked almost a full work week to be able to afford it because it’s expensive, which most auxiliares don’t end up doing. For me, living alone was a necessity this year and I made it happen. If this is your first time in Spain, and you are wanting the complete cross-cultural experience, I really suggest living with people. Even if you live with Americans, it is an excuse to go out and meet other people. 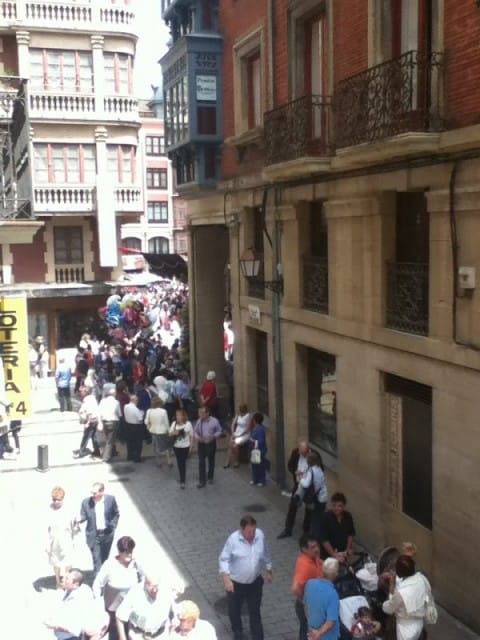 View from my window during the San Bernabé holiday

Now for what you want your dream apartment to have!!

First off, location! Before searching, try to have a general idea of what area of the city you want to live in. In the center? In the old quarter? Close to your schools? Before I started looking this year, I decided I wanted to live in the old quarter (casco antiguo) in Logroño. This was helpful because it limited my apartment search, so I wasn’t so overwhelmed in the beginning. I am a two minute walk from the bus stop where I would catch the bus to work every morning. I am right next to the famous pincho street, near the river where I go running, 5 minutes from my academy, close to the grocery store and the main shopping street. So central! 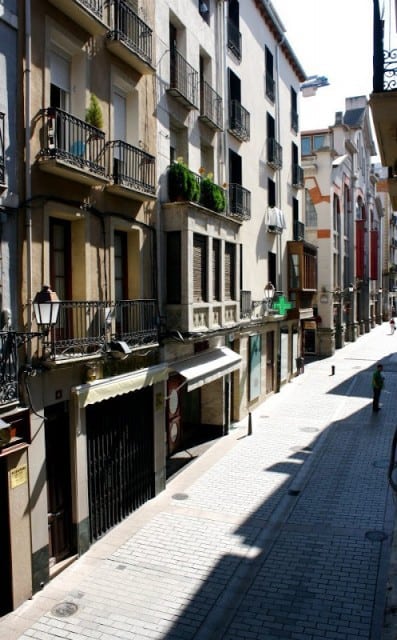 Living close to places you shop a lot can be important

Since most of us don’t have cars, try to think about where you are in relation to the places you’ll spend most of your time. Being central is important. Do you really want to be that one person who has to walk 30 minutes home from the city center or from the bars at night? In the end you will probably make up the difference in money in bus and taxi fares. And most of the time living in the center doesn’t necessarily mean more expensive.

Find a furnished apartment (amueblado), no sense in buying furniture unless you are moving to Spain permanently. There are lots of apartments in Spain that have hideous furniture from the 70’s, probably because the landlord’s grandparents used to live there. But trust me, there are also lots of recently redone apartments, with all modern conveniences direct from IKEA. Keep looking if you aren’t happy. Don’t settle unless you have to! 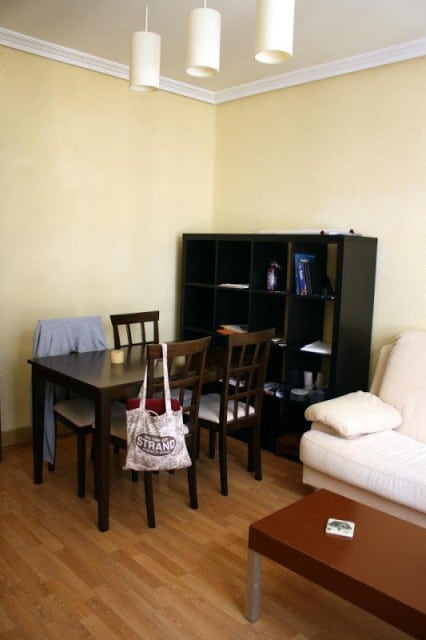 My living room before I decorated and made it home

Check out the heating/air conditioning situation. When I was living in Andalucía, heating was rare. Even though it’s warmer in the south, it’s still freezing when you have no heat! I was cold and sick from November to February. Look for places with heat (central or individual), it’s worth the extra gas bill since you’ll be paying the difference in electricity with plug in space heaters. I paid MORE last year in monthly expenses than this year. If you are living in the south and you are planning to stay through the summer, look for a place with AC too, by June, Córdoba was unbearable, over 100 degrees every day.

My apartment last year had bombonas (orange gas tanks) that you had to order to be delivered and then hook up and heat your water and your stove. It was such a pain in the ass and made for more than one cold shower. This year I made sure my apartment had a proper hot water heater.

Check to see what is included in the rental price (gastos incluidos) some places will include the gas, electricity (luz), water, and comunidad (keeping the building up to par). I think most of the time these bills are separate. Last year my landlord just brought them every month, but this year I had to sign up my bank account directly.

Now for the smaller, things. Last year I didn’t have an oven, and I love to cook, so this was really challenging; 10 months of no baking! Ovens are not all that common in the south. You probably won’t have a dryer or a dishwasher either. 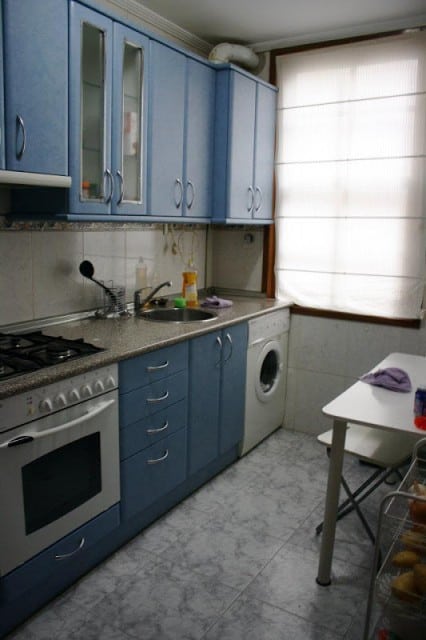 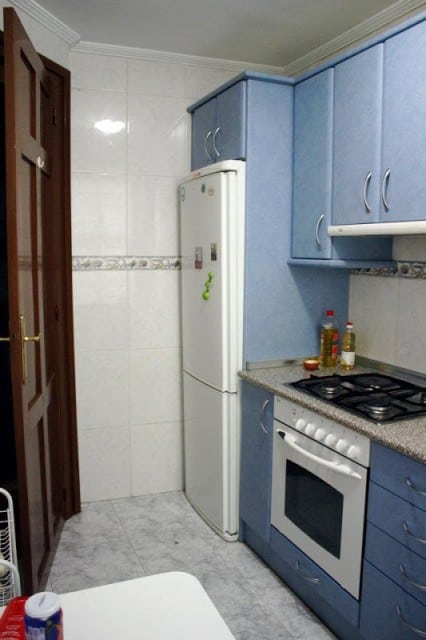 Blue kitchen with an oven!

Decide if you want an interior or exterior piso, whether it looks out on the street or not. I love the views from my piso now, even if it gets rowdy and noisy on the weekends. After my “musical” roommates from last year, I even asked the landlord if any of the neighbors were musicians before moving in. Sit on the mattress. Maybe this is just me, but I think Spain takes the cake for having the most uncomfortable mattresses! I have lived in 7 different apartments here over the years and not ONCE have I had a comfy mattress. Even this year I am sleeping on a crappy mattress, actually two small mattresses pushed together. Sigh. Can’t have everything! 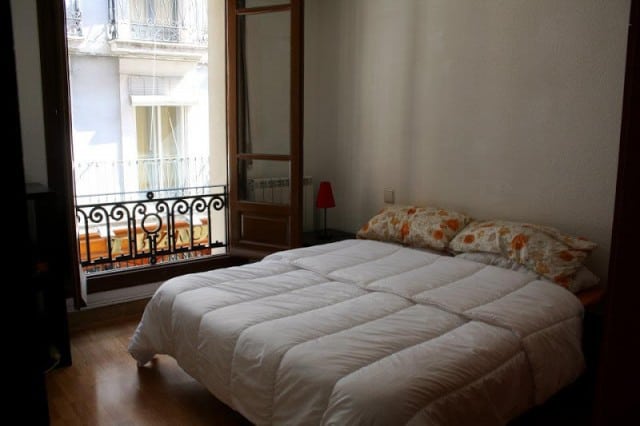 The infamous (and literal) double bed

Looking for an apartment in a foreign country can be daunting, but it will always work out. If worst comes to worse, you have to switch places during the year. Exempting the bigger cities, it should only take a few days to find a place, and the earlier you arrive, the better. Some people can live anywhere and make it work, but for me, I am 100 times happier this year in my apartment than I was last year. It’s made all the difference. I hope my tips will help make the apartment search just a little bit easier for you!

Key words when looking for an apartment in Spain:

Did I miss anything? Any other tips to add for a successful piso search in Spain?

Next up: Getting settled once you get to Spain! Banks, cell phones and internet!

Written by Liz and was published on June 26, 2012 in Accommodation, How to, Living in Spain, Moving to Spain, Spain and tagged in apartment search, auxiliares de conversación, auxiliars, moving to spain, piso, Spain, tips

43 Comments on “Key tips for auxiliars in Spain, part 3: the apartment hunt” 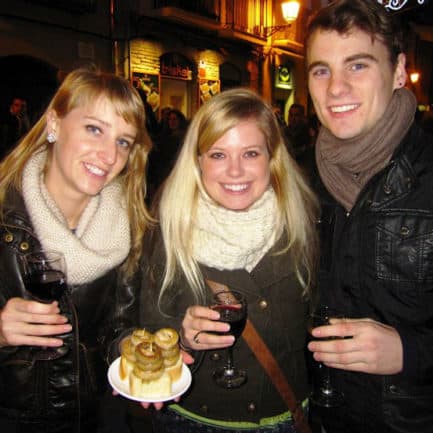 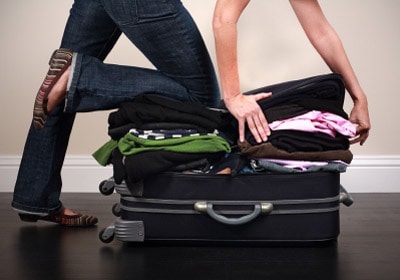 Source Planning to move abroad? Here are my tips about packing for Spain!…Read More 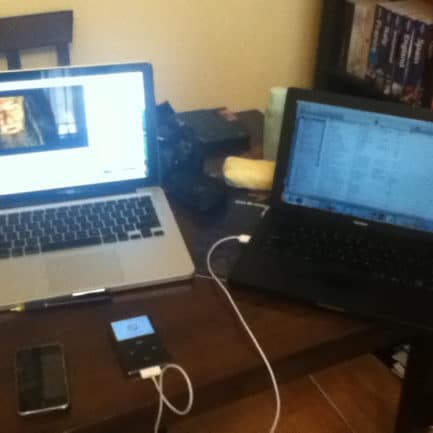