Home » Blog » Europe » How to Swear Like a Spaniard 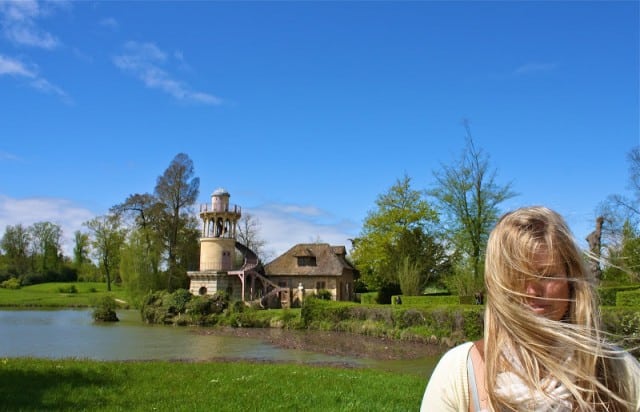 One of my favorite things about living in Spain was speaking Spanish. Blinding flash of the obvious, speaking Spanish in Spain, but I loved every minute of it. I loved ordering breakfast at the cafe around the corning of my apartment. I loved chatting with the bus driver. I loved talking to my little 3 year old students in baby Spanish. I loved having park bench conversations with old Spanish men on Sundays. I even love making mistakes! I loved everything about it, how you had to work and work at it, to have the soft “j”s and double “r” roll off your tongue.

Spanish is such a beautiful language for me, and so very different from English. I love that you literally say “give me a coffee with milk” and “kisses” instead of hugs. Spanish is like Italian, it’s so colorful and vibrant. It’s so alive! You speak with more than just your lips and tongue, you talk with your whole face, your hands, your arms. It’s so elaborate and dramatic! I love it! In Spain there are so many accents and so many regional sayings, you are always hearing something new! There are so many beautiful expressions, so many interesting and descriptive ways to say things in Spanish, I never get tired of learning and practicing. And one of the things Spain does the best: swearing.

There are so many different ways to swear in Spain, it’s hard to remember them all! Cursing is an integral part of the language, so it has become less taboo that in English. You hear it much more often and much more frequently peppering up sentences than we do in the US or England. No one can ever say that Spanish isn’t a colorful language.

And let’s be honest here, what’s one of the first things you do when you start studying a new language? You look up the bad words (palabrotas)! So here, I have done the hard work for you and compiled a list of some of the most common and hilarious curse words used in Spain! Feel free to chime in with a few of your own!

This one takes the cake for one of the most hilarious and frightfully offensive swear words I have heard in Spain. Literally, “I shit on your bitch of a mother,” one should use this phrase selectively and with caution. Remember, madres are sacred in Spain. In fact, the “me cago en…” is one of the most common curse phrases you’ll hear in Spain. Whether you hear me cago en Dios “I shit on God”-that’s one is really bad -or me cago en la leche, literally “I shit in the milk” but used more like “holy shit!” there is no shortage of possibilities to be had with this one, like me cago en todos los santos or me cago en la Virgen del Pilar. Just remember if you want to insult anyone or anything in Spain, bring in the moms or anything related to the Catholic church and you’re good to go!

Joder is about as common in Spanish as ok is to English. You hear it all the time. Loosely translated as “fuck,” it is nowhere near as strong. To soften it, many of my younger students would say jooo-er and not say the “d” or the little ones say jolines. That of course doesn’t stop the adults. I used to work with a teacher who loved to say (scream) “Joooooder, por qué no te callas?” (Fuck, why don’t you just shut up?) at the students in class. It was hilarious. And a little bit frightening, but that’s the Spanish public education system for you.

Personally, I like to think gilipollas means “dumbass.” Normally I equate the phrase no seas gilipollas to “don’t be a dumbass.” My middle school students used to love to insult each other with this one. Sometimes I translate it in my head as “blithering idiot” to keep things interesting. 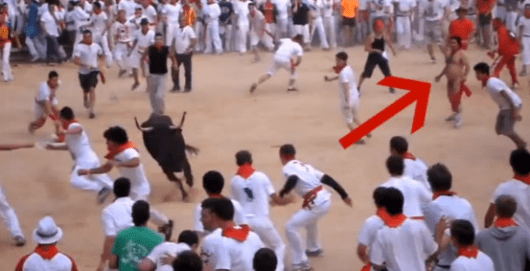 Pretty much the definition of gilipollas

This one was bigger in southern Spain than when I lived in the north. La hostia means “the host,” you know, like in communion. Spain being a thoroughly Catholic country, one of the worst and most common ways to curse is to somehow incorporate the holy mother church. Hostia or hostias can mean many different things, like “shit” or “holy shit” usually an exclamation all on it’s own, like something you can’t believe. Eres la hostia means “you’re the shit,” in a good way or hostia puta “holy fuck.” Don’t forget you can always say, me cago en la hostia, “I shit on the host.” Yikes, that’s blasphemous!

This one is one of my favorites and one I have personally never said because I am terrified of using it wrong, and I think it sounds just plain ridiculous as a native English speaker. Que te folle un pez basically means “I hope you get fucked by a fish.” See what I mean when I say Spanish is colorful? How do you even come close to insulting like that in English?! How do you even begin to compare “screw you” or “fuck you” to that?

In spanish they say “cojones sirve para todo,” and it’s true. Cojones is without a doubt the most versatile of all the Spanish curse words on this list; you can use it for just about anything. Normally, it means “balls,” you know, in the masculine sense. “You’ve got balls (as in courage or well, the other kind too)”- tienes cojones. “That bothers me” – me toca los cojones and my personal favorite, estoy hasta los cojones – “I can’t take it anymore, I’m up to my (eye) balls.” Here is a hilarious video in Spanish that explains it all! 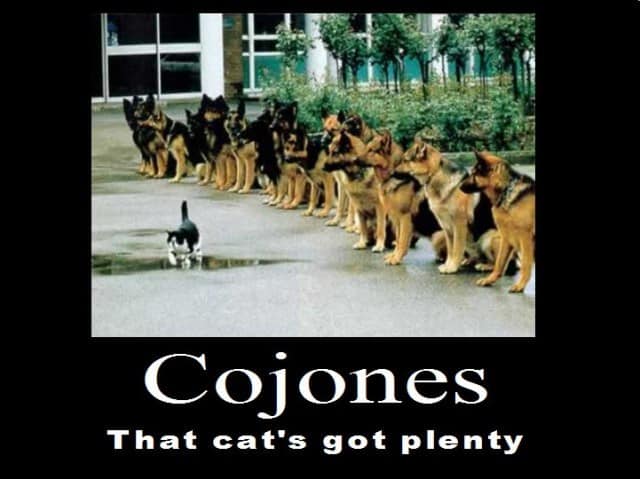 For me cabrón has always meant “bastard,” “dick” or “total asshat.” Literally meaning “male goat,” I most frequently hear it as qué cabrón or qué cabrones in plural. People who suck, people who are assholes and deserve a good punch in the heard. According to Urban Dictionary, “A good definition that would apply to all Spanish speaking countries would be asshole-fucker-bitch.” Can’t top that even if I tried.

This one is kinda like “up yours.” Seriously, does anyone even say that anymore? I learned this the hard way after getting in a big screaming fight with one of my roommates 2 years ago about how washing dishes means less cockroaches. Ick. Anyways, culo means “ass” so I think you can probably figure out what the rest of it means on your own. I am too much of a lady to write that out completely, plus, who knows what kind of traffic I would be inviting on here if I did. You can say just que te den or que te den por culo, both meaning “fuck you.”

Coño means, c….., cu…, crap. I just can’t bring myself to say it or write it. Let’s just say it’s very naughty and starts with a “cu” and ends with a “nt.” I don’t think I have ever said the “c” word in my life. I think I would have been expelled from my fancy women’s college if I ever did. Normally it’s used like “fuck” or “shit” and not as strong as the “c” word in English. 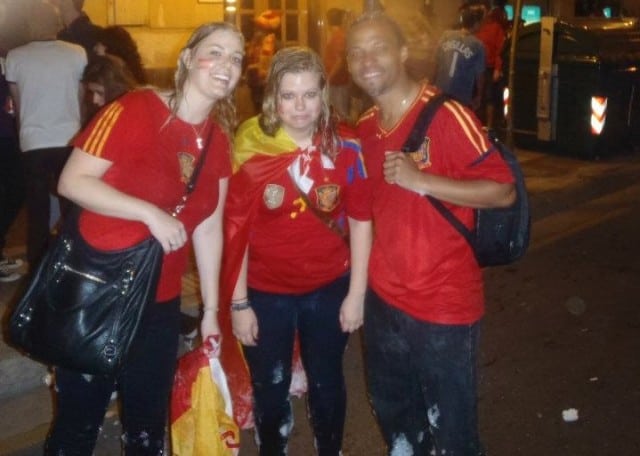 “¡Coño! I wish I had though twice about playing in the bubble machine! My pants are soaked!”

I’m going to end with my all-time favorite curse word in Spanish. Readers, I present to you pollas en vinagre “dicks in vinegar !” Use it how you best see fit, its exact meaning still eludes me!

What’s the most interesting swear word you have encountered on your travels?

Written by Liz and was published on December 5, 2012 in Europe, How to, Learning Spanish, Living in Spain, Moving to Spain, Spain and tagged in auxiliares de conversación, expat spain, living abroad, Spain, swearing 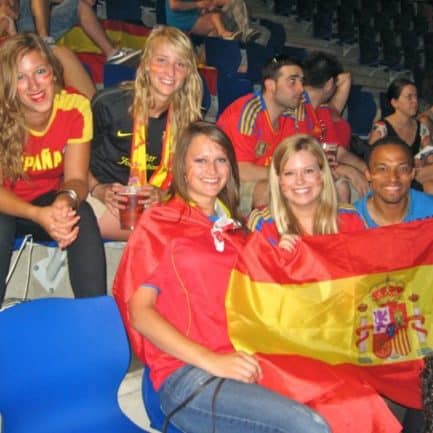 Learning Spanish: what NOT to say

Whoever said learning a foreign language was easy should be shot. Ok, maybe…Read More 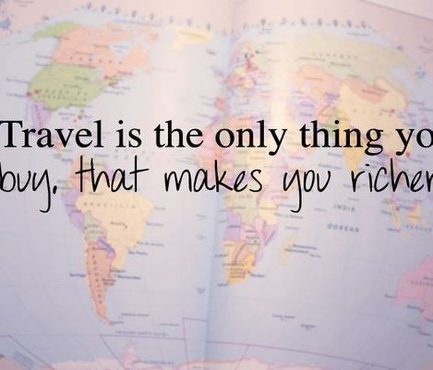 Get Inspired: Travel and Learning Languages