Home » Blog » Adventures » The Coolest Thing I Did in Turkey: Rappelling off a Castle (Video) 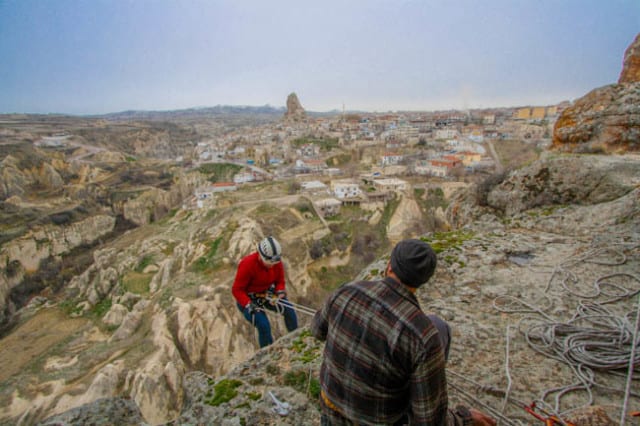 “Hey Liz, want to go abseiling this afternoon?” Ozgur asked me over coffee in the Middle Earth Travel office on my last day in Cappadocia, Turkey.

Thankfully, the guys understood my desperate need for strong hot coffee first thing in the morning and always had some to spare whenever I stopped by. Even more thankfully they understood my wish to see and do as much as possible in my short time in this spectacular region of Turkey and always had an idea or two up their sleeves.

“Sure, that sounds fun. What’s abseiling?” was my reply as I absentmindedly flicked through a Turkish mountaineering guidebook, thinking to myself I was so NOT ready to say goodbye to Cappadocia.

“You know, when you rock climb with the ropes but going down instead of up. We have abseiling in Cappadocia from a Roman tomb in a medieval castle.”

I dropped the book and looked up, gulped down my mouthful of coffee as my eyes bulged. “Wait a minute, you mean rappelling? Are you saying I can rappel off a Roman tomb inside a castle?!?!”

Oh my giddy god, Christmas came early! Who knew you could combine three of my favorite things into one: adventure sports, history of the ancient and/or medieval variety and travel!

Little-known fact about me: I was actually born a spider monkey. I love rock climbing, bouldering, and rappelling and all sorts of crazy adventure sports that involve heights. Anything that gets your heart racing and makes your breath short and your palms sweat I am a big fan of (except dating).

Though I wasn’t always like that; when I was really young I used to be a total scaredy cat when it came to heights. Like I used to climb 5 feet up the rope in gym class, freeze, cry and howl until a teacher could come and pry me off. Then I did my first ropes climbing course when I was in girl scouts, probably around 10 years old, and I totally fell in love with it. The very first time I rappelled off a rock wall, it took me approximately 15 minutes to be able to take the first step backwards, while other girls tapped their feet in annoyance waiting their turn. But once I took that first step, there was no going back; I was addicted. Since then I used to do adventure camps in the summertime, and I used to beg my mom to let me celebrate my birthday parties at the big indoor rock climbing gym in town.

I did a quick mental check on my travel insurance policy with World Nomads. Was rappelling included in the list of adventure sports covered on my custom policy? Yup, you bet it was! Then I stood up and clapped my hands. “Yes, yes YES! That sounds AWESOME! I’m totally down for rappelling, I mean abseiling,”

Ok, sidenote, is abseiling like the British/Australian non-American word for this? Because back home in the grand ol’ USA we call hopping down a cliff rappelling. Is this just an extension of the whole pants versus trousers debate?! 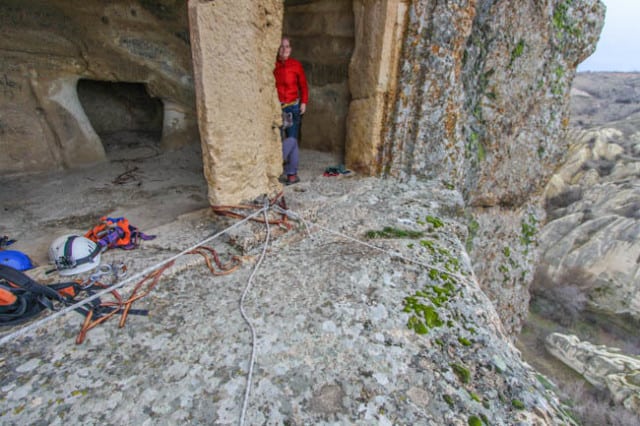 Later that day under an overcast sky, we piled in the Middle Earth van and drove out to İshak Kalesi in Ortahisar, one of the castles that pepper the Cappadocian countryside. Jittering with excitement, I caught my first glimpse of the castle.

I’ve mentioned before the unique lunar landscape of Cappadocia; fairy chimney stone pillars dot the landscape while underground there are networks of tunnels, caves and even entire cities waiting to be explored. Since this area of Turkey has been inhabited for thousands of years, in the very large fairy chimneys, people used to build actual fortresses inside them. A few are open to the public.

As the van pulled up outside the castle, we gathered the ropes and gear and started walking towards the giant structure; Ogun put a helmet on me and turned my new GoPro on. “Already?” I asked him, “we aren’t even at the top yet.”

“You’ll want to film this, it’s a cool climb to the top,” he replied.

Cue second Indiana Jones moment of my time in Turkey.

Like many of the lesser-known historical sites in Cappadocia, you can visit this place whenever you like; there are no tickets or guards or anything – we were the only people there. 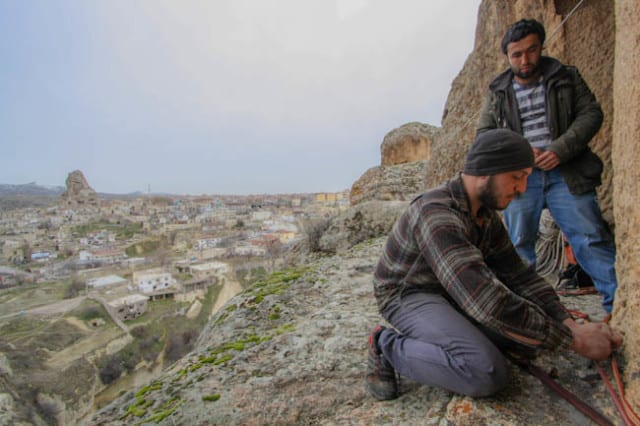 Following the guys, we slowly climbed up a worn stair barely visible that circled the bottom section before climbing in a hole in the side of the castle. Walking through tunnels and up ladder-like stairs in the dark, we wormed our way to the top. Looking around I had breathtaking view of the surrounding fairy chimneys and town before making the final step to the Roman tomb.

In my head, Van Halen was jammin’. Perfect pump up music.

The tomb is inside an open cave in the back of the castle that has over a 200 foot drop down to the valley below. To get to it, we had to carefully edge around a narrow rock ledge, with a vertical cliff. With Ogun holding my hand, I took the few terrifying steps inside to the safety of the tomb. Phew!

Now for the fun part! 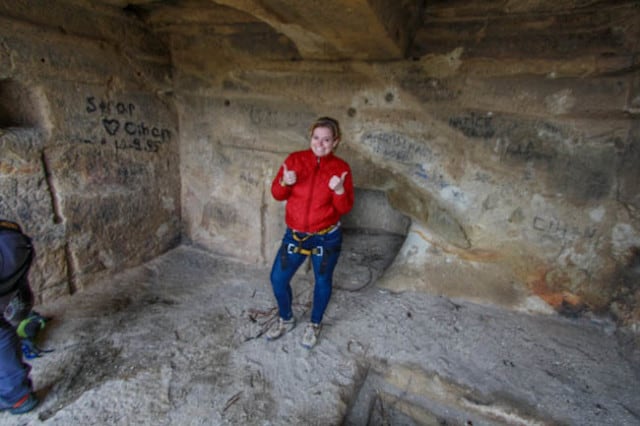 With a healthy distance between me and the cliff, I snapped a few photos while Ogun and Hami started setting up the ropes while Ozgur helped out below. Professional mountaineers and climbers with decades of experience, the guys who work at Middle Earth Travel really know what they’re doing, probably why they are mentioned so many times in my trusty Lonely Planet. The fact that we were also using a back-up rope also helped.

As I slipped the harness on around my legs and waist, nerves finally started to kick in. “Are you sure those ropes are secure? What about my harness, can you check it again? Maybe it can be tighter.” While Ogun patiently rechecked all my ropes and harnesses for a second and third time, I realized it had been years since I’d done any rappelling, bungee jumping and/or bridge jumping. Not since 2009. Uh-oh. Was I getting old? 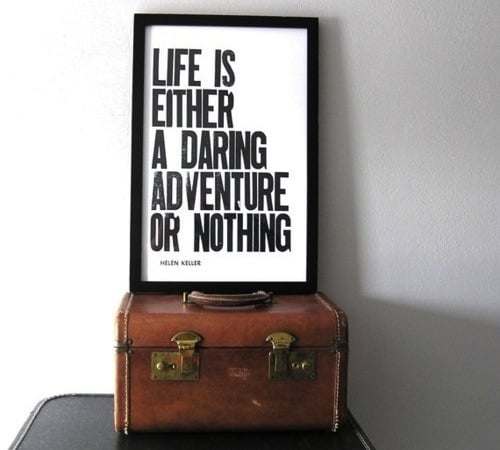 Slowly edging backwards, with my feet on the corner of the edge of the cliff, he repeated how to manage the ropes to me. There was metal lock and pulley kind of system where you control how far and fast you descend. In the past, I had always used a belay system paired with someone on the ground with just me and the rope, but this time I was in charge.

“I don’t want to be in charge!” I said in a panic after glancing down between my feet. “Holy sh*t that’s high!”  Holding my hands, Ogun good-naturedly gave me another pep talk while I took a few deep breaths trying to calm the hell down. If you have ever gone rappelling, you know that first step is the hardest to take. You have to put all your trust on the rope and the person at the end of it; considering the fact that I am borderline OCD and a control freak, this is no easy feat. 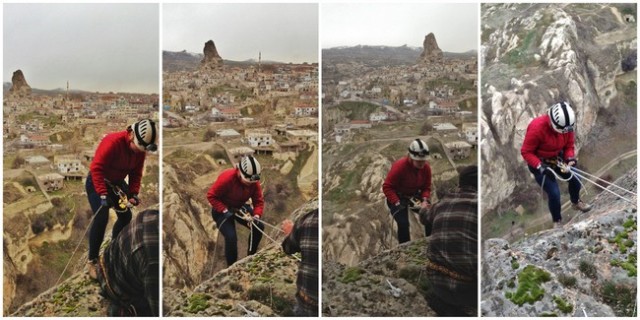 It took approximately 8 minutes for me to take that first step. 8 minutes of footage on my GoPro camera of me taking baby steps back and forth muttering to myself things like “Just take one step, it’s easy! Quit being such a wuss, you run an adventure blog for god’s sake!”

Once I finally found my nerve and took that first step, it was all downhill from there, pun intended. Laughing, I slowly hopped down the side of the castle, looking up at the guys – I’m sure they thought I was nuts as I inelegantly scrambled down the side of the cliff. About halfway down, the rock face curved inwards and I was left dangling with the harness gave me a superb wedgie. Why did I wear denim? Trying not to have an absolute canipshit, I slowly continued to descent ungracefully as the rope slowly circled around offering me a wild view of the valley, towns, fairy chimneys and castles and with the snowcapped mountains in the distance.

“Wow!” I breathed, as I mechanically pulled and lowered the rope to the first ledge. Sliding in on my ass, I hopped up and stood for a moment trying to take it all in. Then I looked down, “ah crap! I have to step off another ledge!” 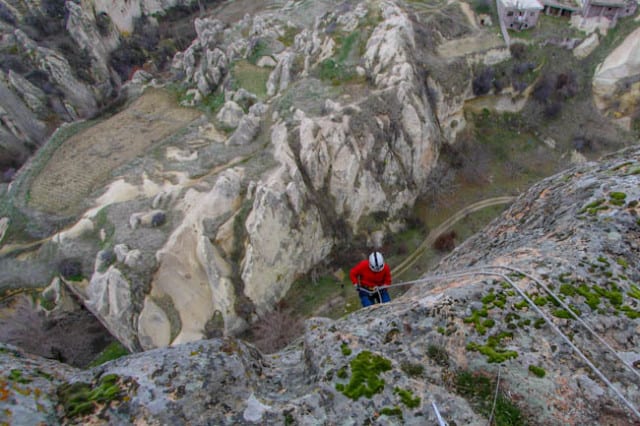 Word of wisdom, don’t stop halfway, because then you have to take that first step all over again. With my feet on the edge, it took me another minute or two to pluck up my courage and step off again. And I didn’t really step off, I sort of jumped, slipped and smacked into the rock.

Wack! Good thing I was wearing a helmet and puffy jacket!

Walking down the cliff side, I finally landed again. Laughing while Ozgur unhooked me and dealt with the ropes, I hopped up while my knees wobbled with a huge smile on my face and fist-pumped, Pauly D style. Success! I still got it!

As the guys made their way to the van, I threw my arms around them thanking them profusely. What a truly epic day!

What a way to end my time in Cappadocia! Talk about going out with a bang. Getting to rappel from a Roman tomb inside a medieval castle was by far a major highlight of my trip in Turkey. How can you top that?

What’s the coolest thing you have ever done traveling? Are you a fan of rappelling or adventure sports on the road? Would you rappel off a castle?

*Many thanks to Middle Earth Travel for hosting me in Cappadocia, Turkey. Like always, I’m keeping it real – all opinions are my own.

Written by Liz and was published on April 3, 2013 in Adventures, Asia, Destinations, Middle East, Turkey and tagged in adventure, Cappadocia

35 Comments on “The Coolest Thing I Did in Turkey: Rappelling off a Castle (Video)” 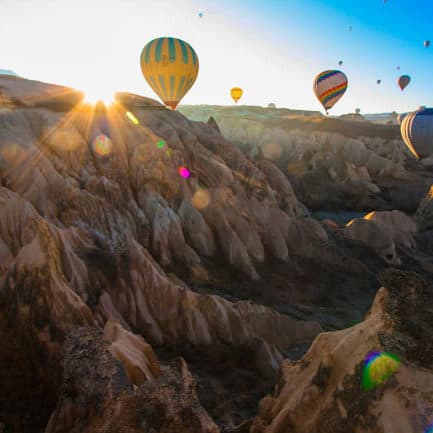 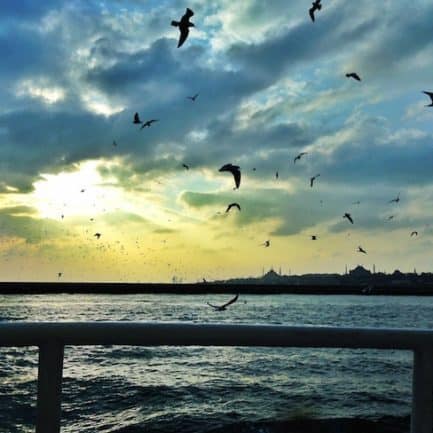 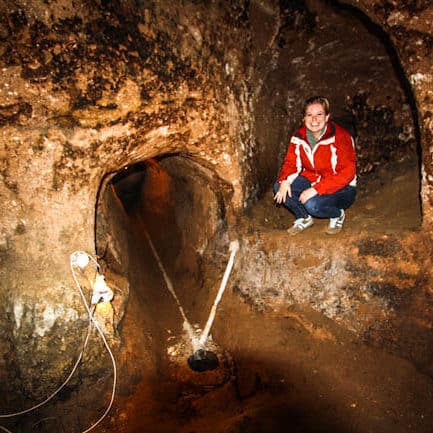