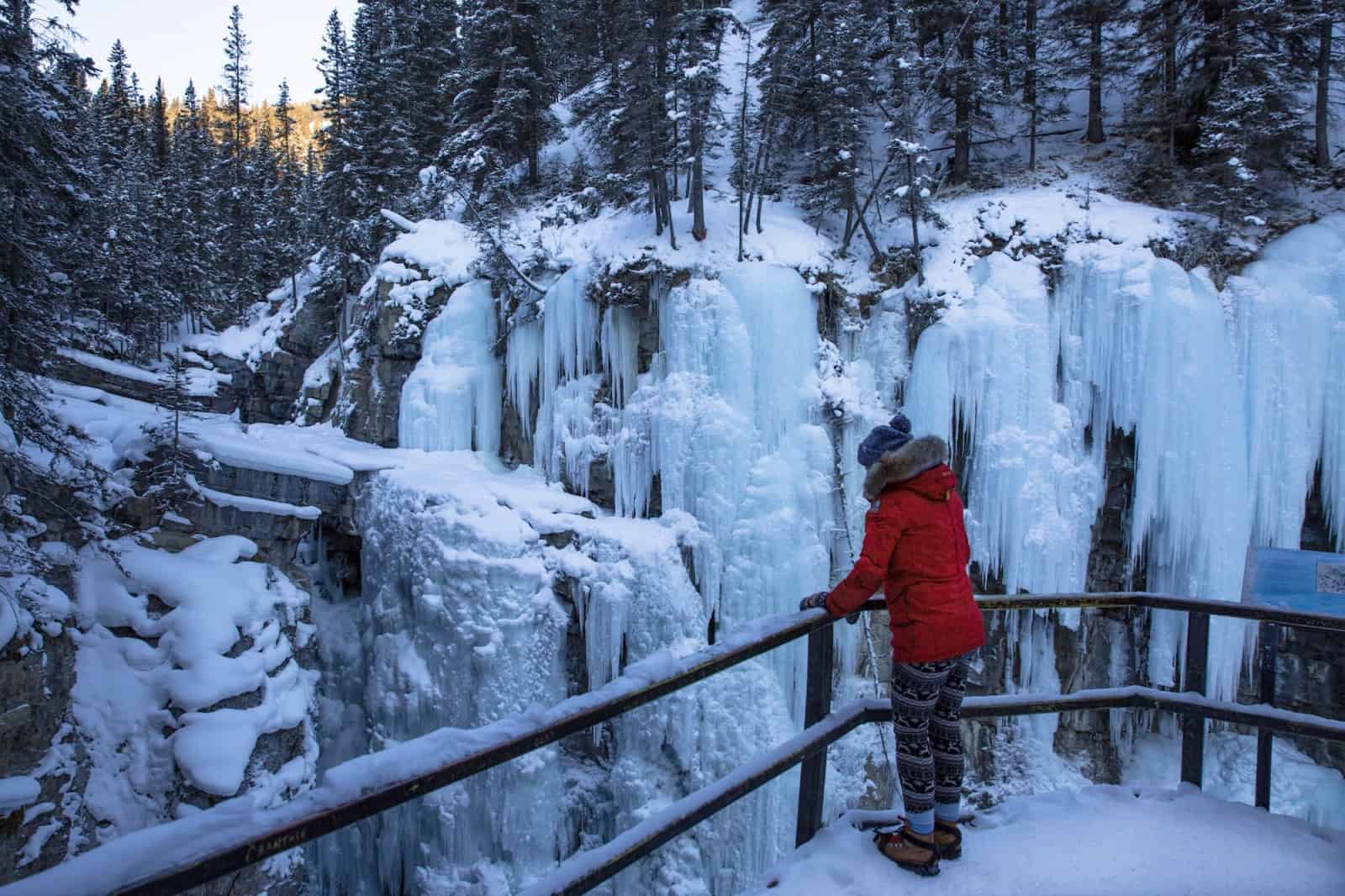 2016 was a year of many firsts for me, of trying new things and having new experiences.

It was also the year I truly fell in love with winter, making it a specific part of my travel plans. I love nature and being in the mountains, and nothing compares to seeing places like that in the coldest months, when everything is a white winter wonderland. Cold is beautiful.

And nowhere does winter better than Alberta, Canada, especially in January. 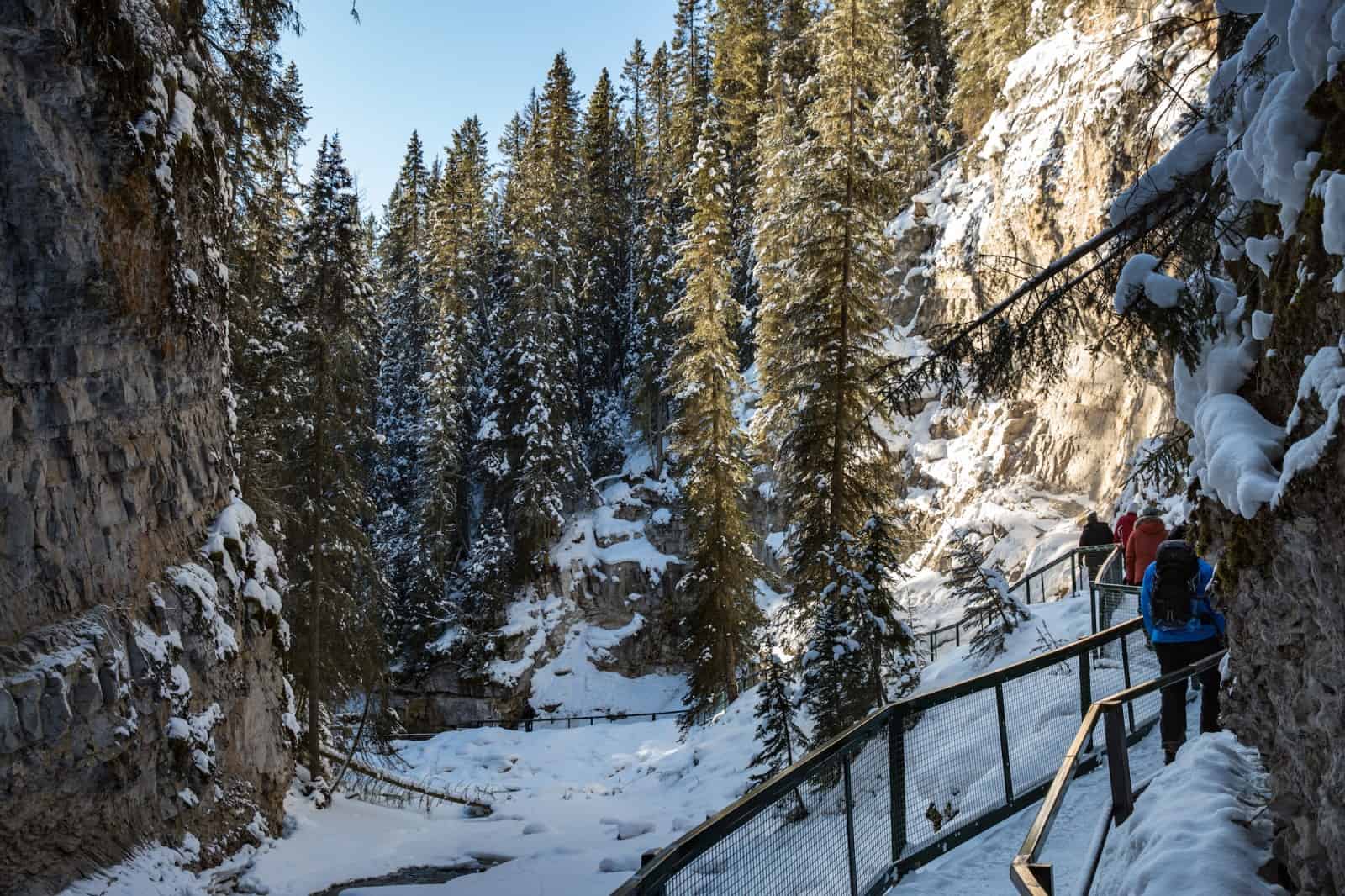 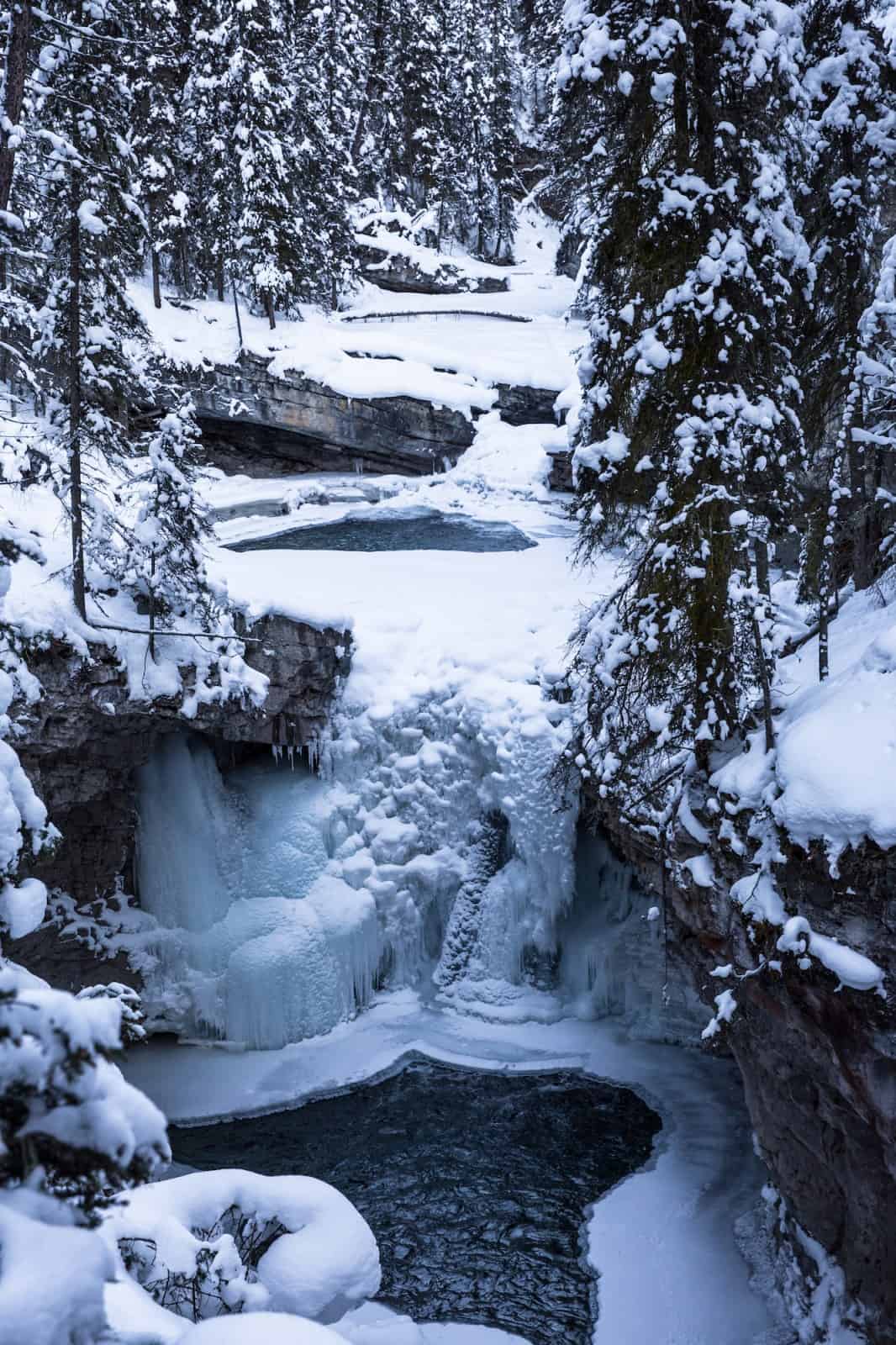 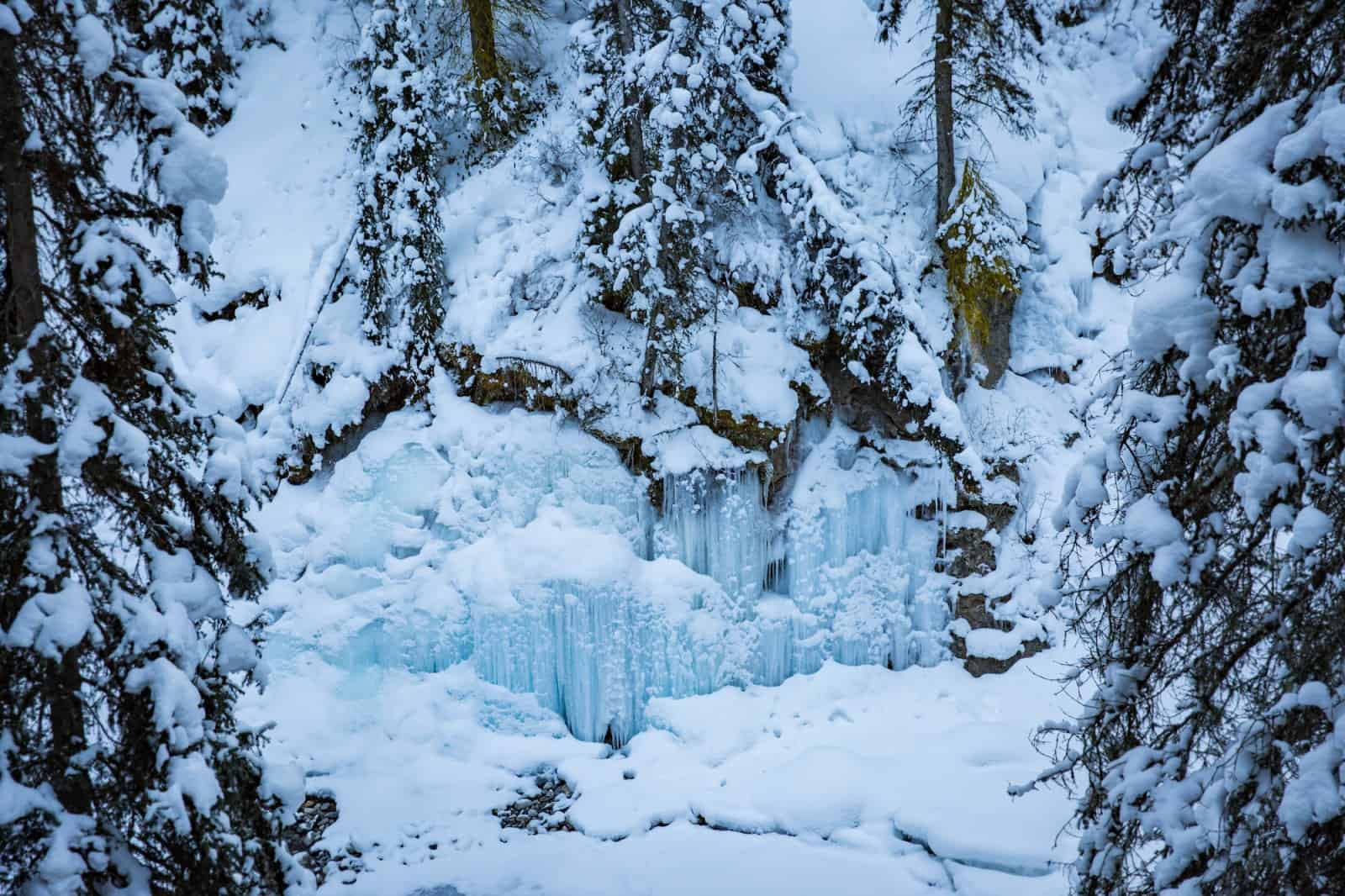 To be totally honest here, I fell in love with Alberta even before I arrived. It was an easy sell. I had seen pictures of it over the years on Instagram, and it looked so similar to New Zealand (except 100 times more extreme) that I knew I’d love it.

And oh boy did it live up to expectations.

Its hard for me to pick a favorite moment from my time in Canada in winter, but if I had to chose, it probably was when I went for a sunrise hike in Johnston Canyon near Banff, which also happened to be the coldest morning I had ever felt to date.

Colder than a witch’s tit, as we say in the South. 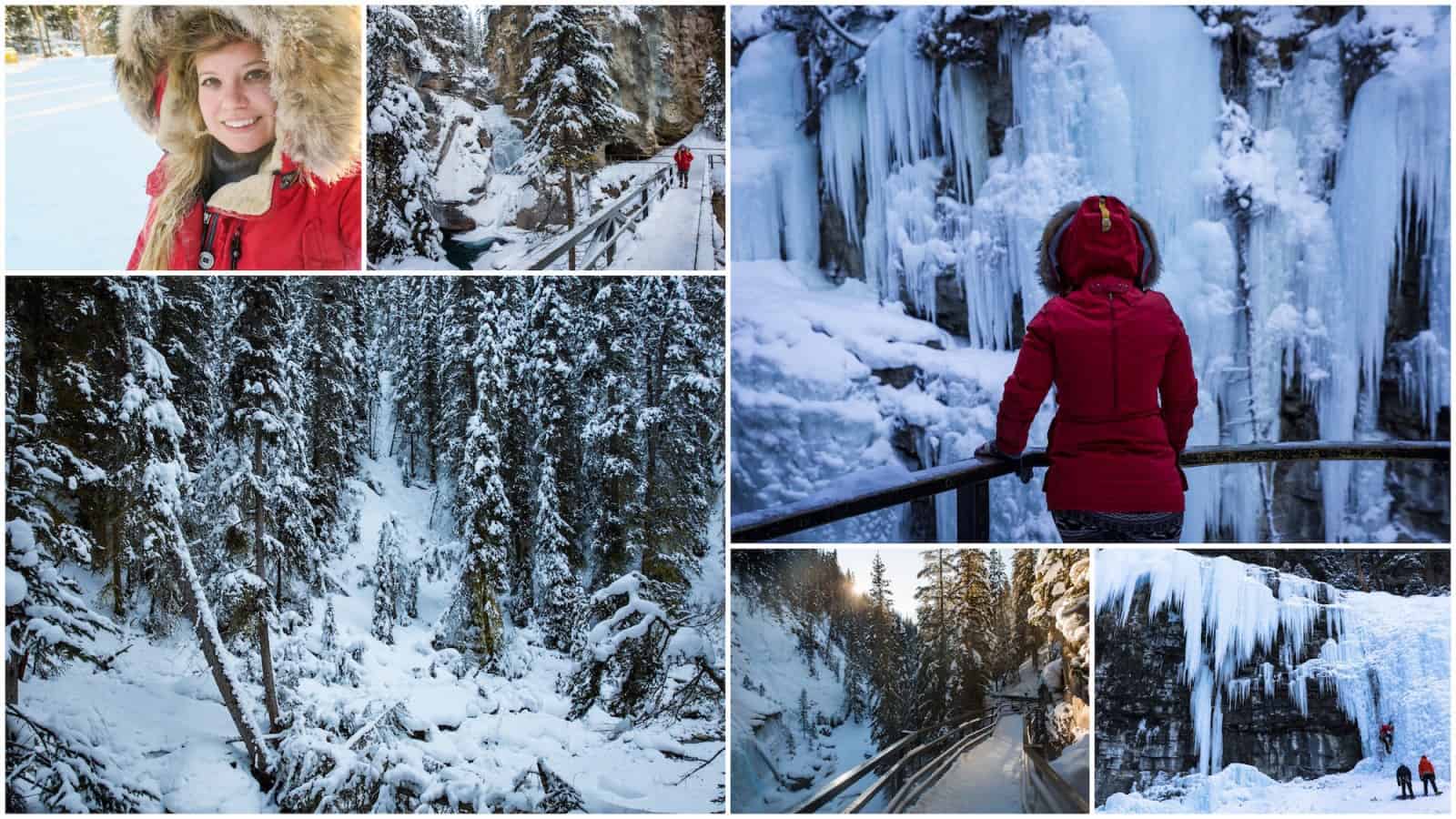 It had been a clear, still night full of stars, white walker weather as I like to say. Shivers. Literally.

It was so cold when I went to bed that night in Banff at the Buffalo Mountain Lodge, the snow outside didn’t look real. It was so still and cold, the snow was so dry it sparkled, like nothing I had ever seen before. It was so dry you couldn’t even form a snowball with it. Perfect, perfect powder.

It was still dark with a few stars twinkling before the dawn light began on the horizon as I layered up in my warm, cozy cabin room and packed my camera gear. Glancing at my phone, I almost couldn’t believe it when it said-30° C. I never felt temperatures that cold before.

Check out my post about traveling in extreme climates and not destroying your things. 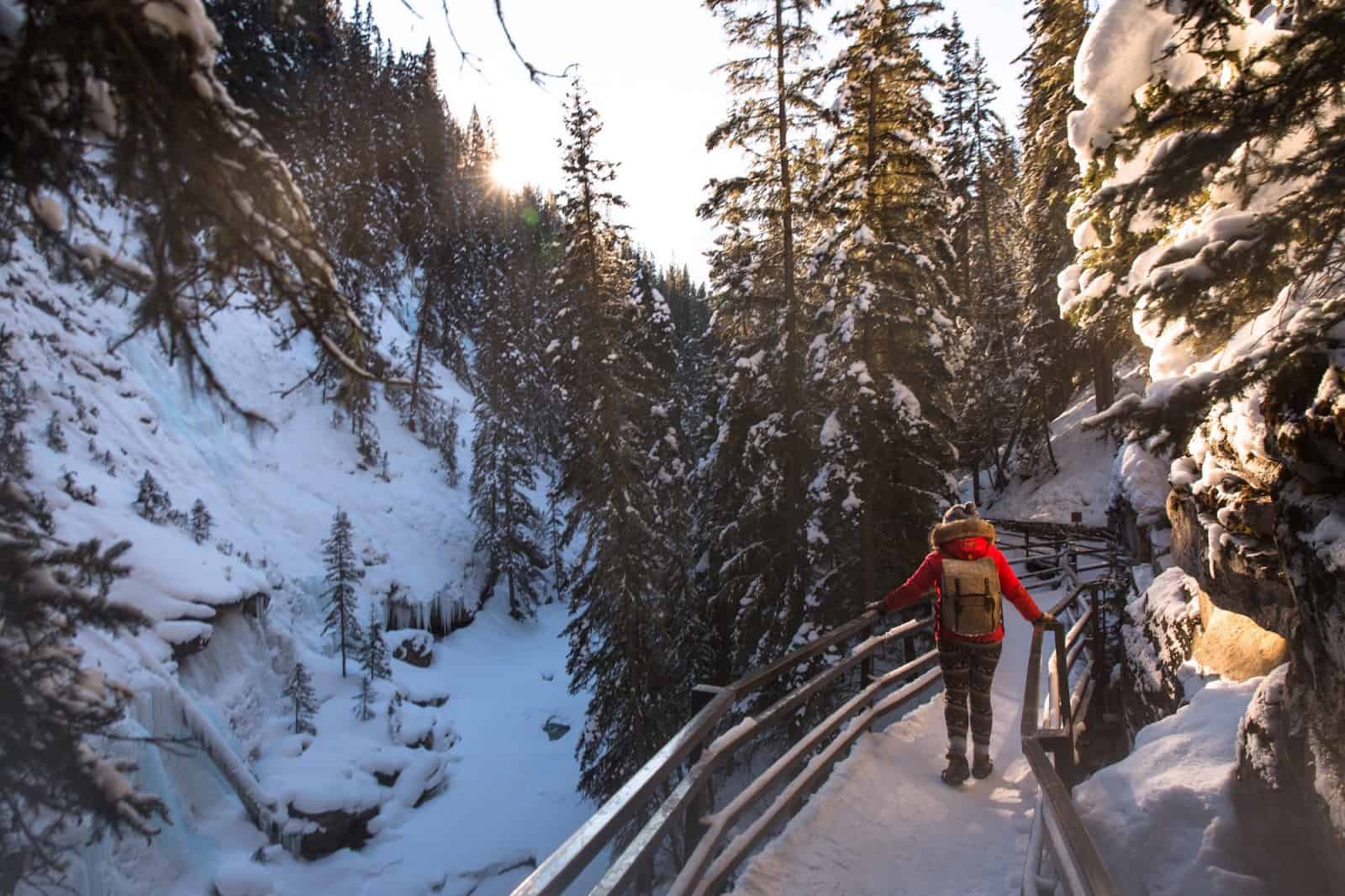 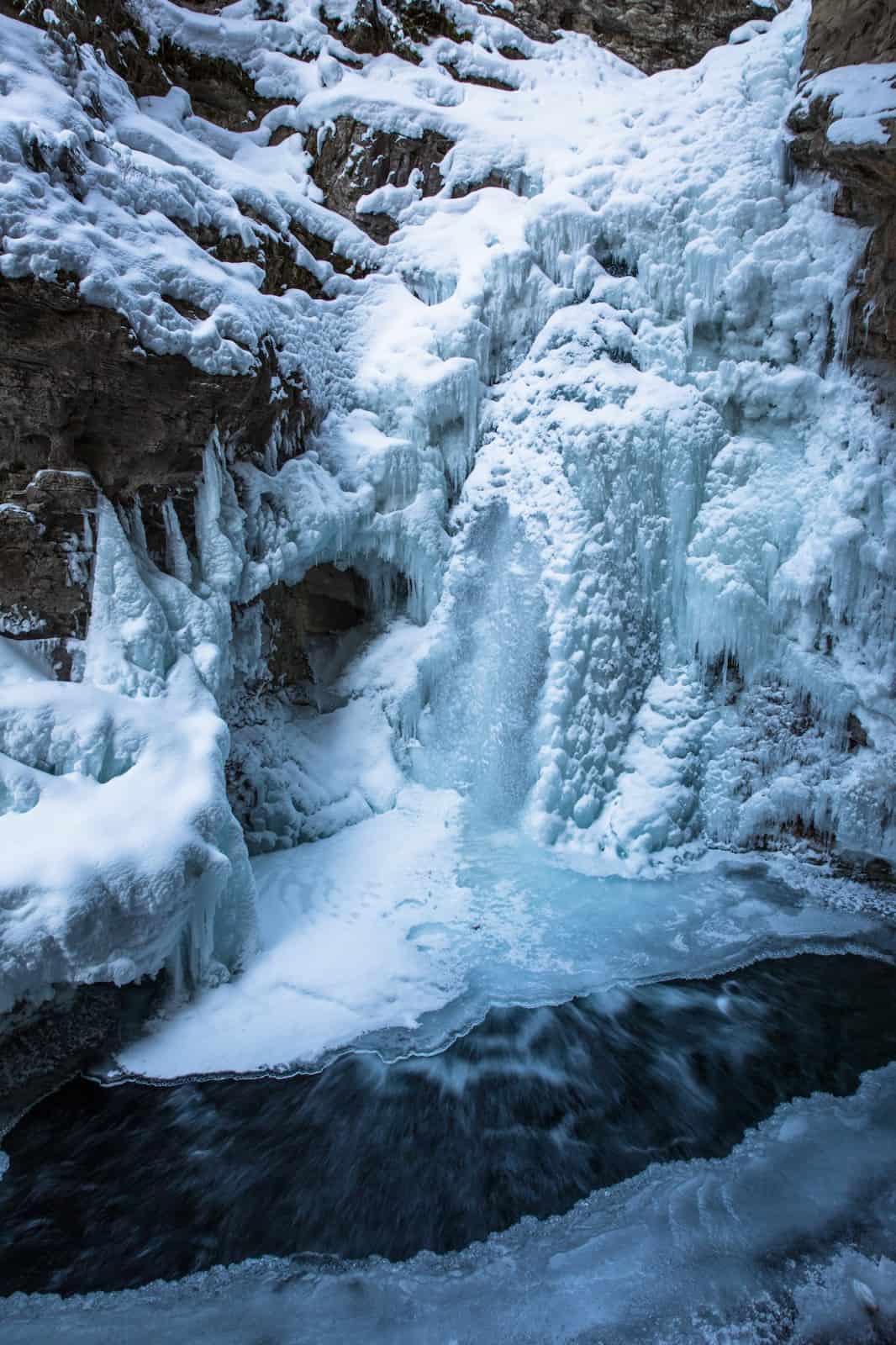 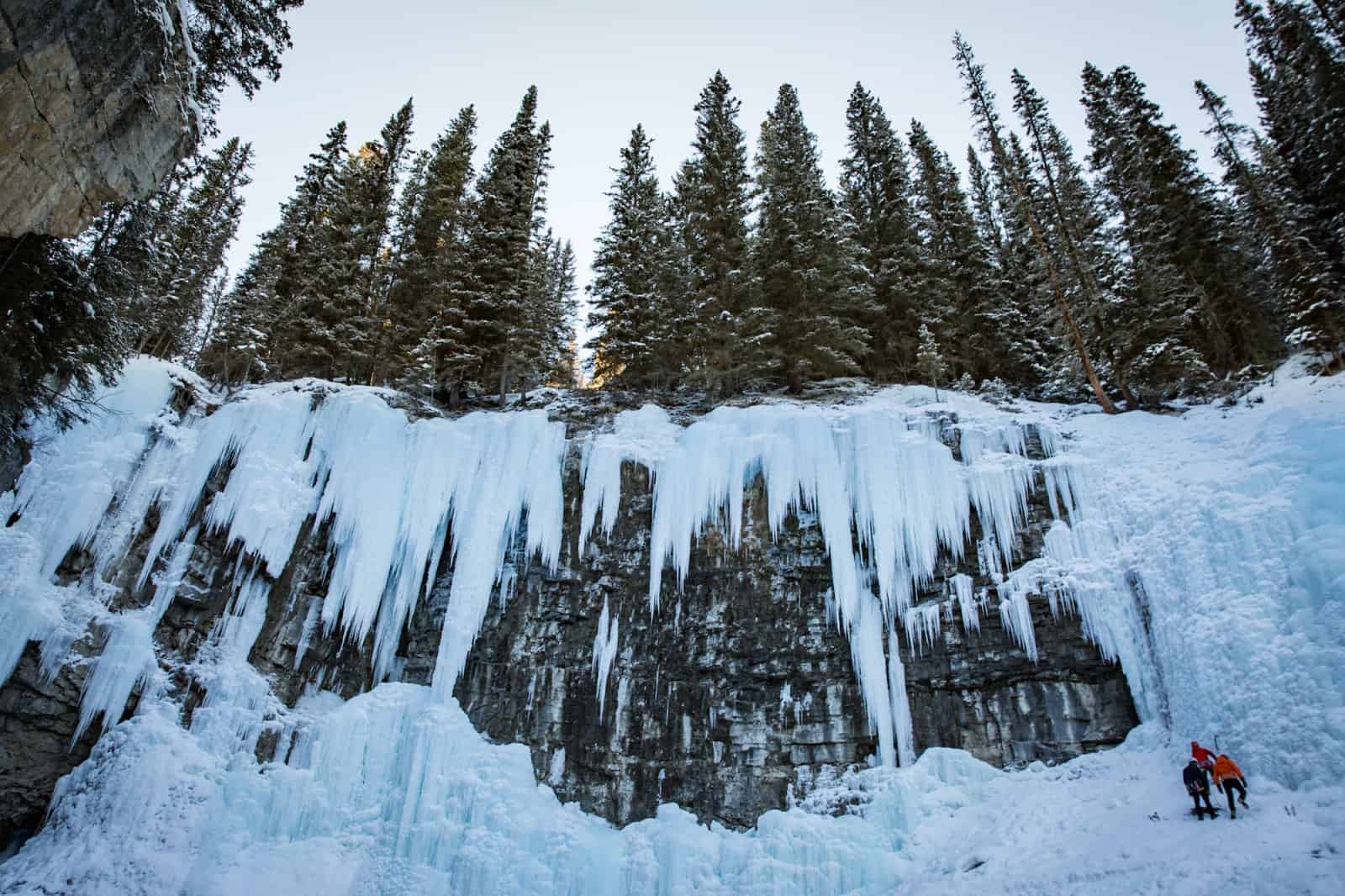 The cold was dry with no wind so it wasn’t so shocking when I went outside to get picked up by Discover Banff Tours. No white walkers or ice spiders, a good sign.

I was joining in on one of their guided tours of Johnston Canyon since I was traveling on my own, an iconic spot in Banff I was dying to check out. I made sure to go on their very first early morning trip so we had the canyon to ourselves.

While you can definitely visit the canyon all year unguided, I wanted to learn about the area and I wanted to borrow the right gear for it in winter. The river and waterfalls freeze in winter, and the path is covered in snow and ice which gets compacted down and even more icy with all the visitors walking on it, and is super slippery.

While you don’t need crampons, you should definitely borrow some ice/snow cleats that slip over your shoes, or are provided along with warm gear if you go on a guided tour. 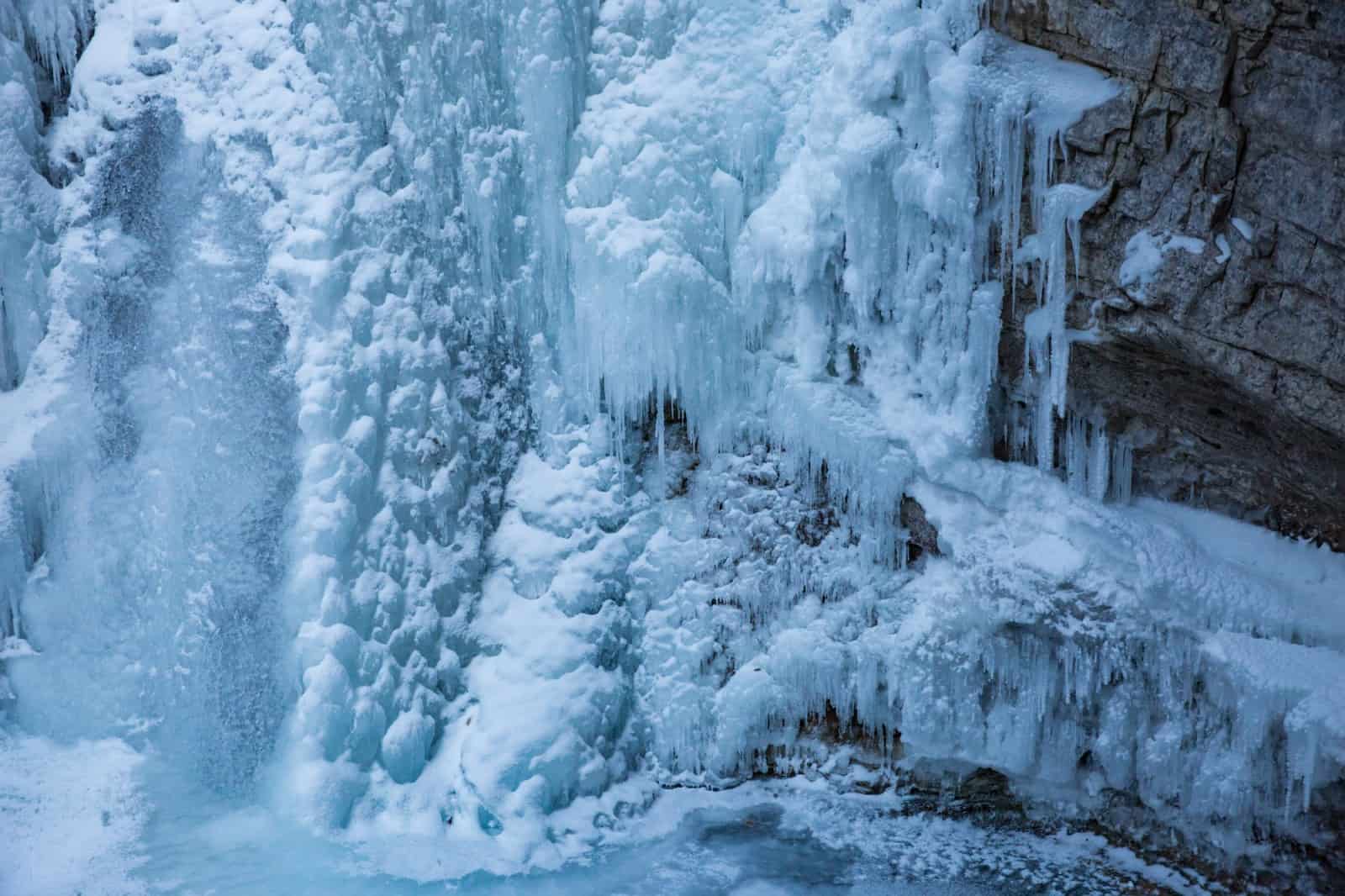 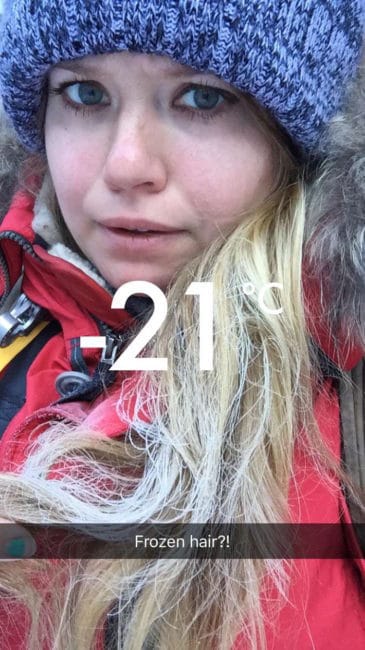 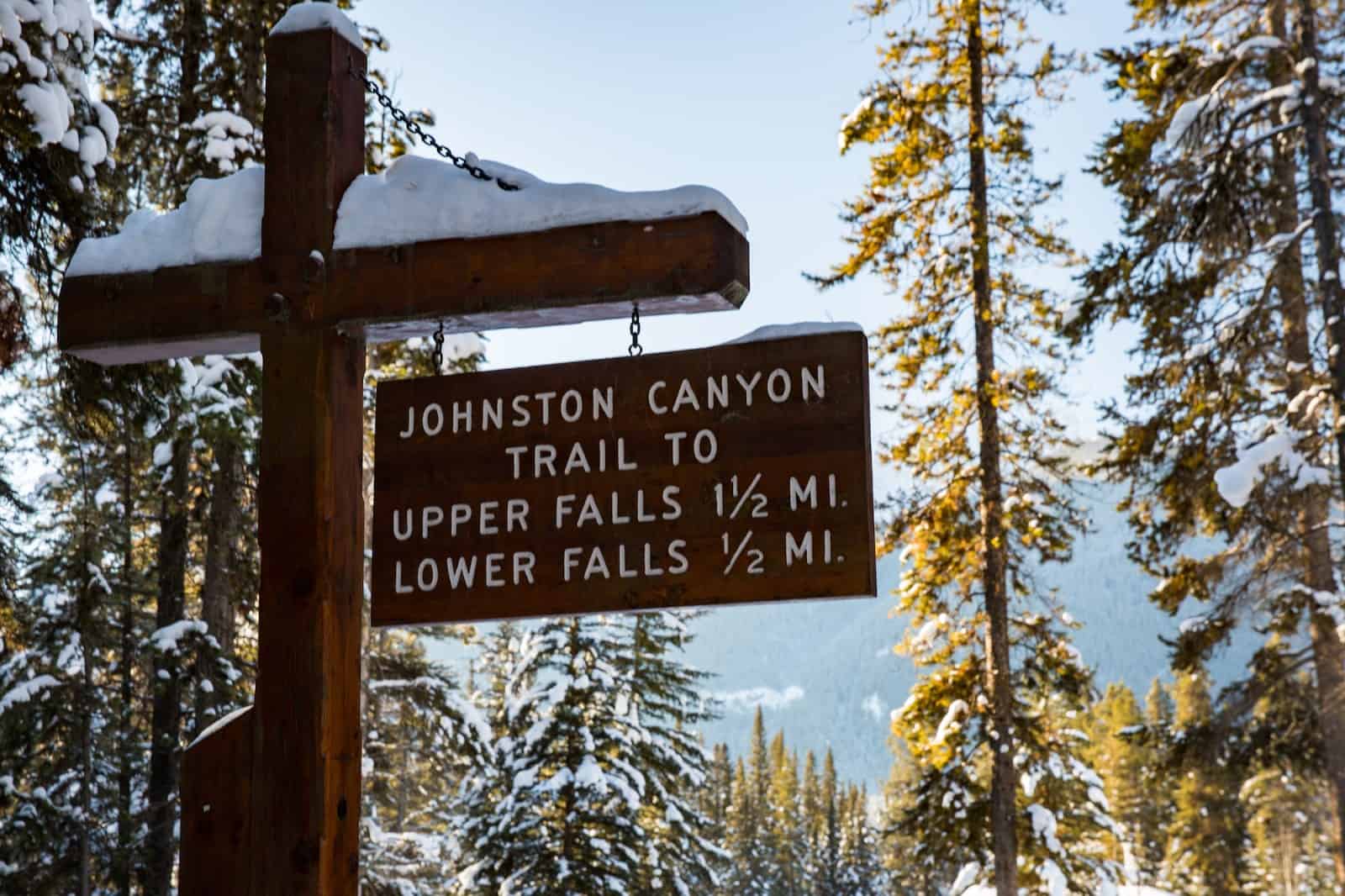 I wore two pairs of thick leggings, thick wooly merino socks, and my heavy duty winter Parajumpers Musher jacket. My breath froze on my hair immediately and all along the edges of my jacket, and my iPhone died within seconds of my taking it out of my warm pocket.

I feel like I should also take this opportunity to mention that it is NOT always that cold in Alberta, I think the usual January average is around -15°C, but because it’s so dry, it’s much more bearable than a damp cold. Ugh, not my favorite.

But I will say I loved experience the icy winter wonderland of Johnston Canyon in those temperatures because it made it seem even more eery, still and mystical. The dry snow sparkled in the early morning light and the ice seemed the most insane shades of blue.

Didn’t take long for me to start humming the Frozen soundtrack in the back of the group. FREAKING magical guys! Let it snow! 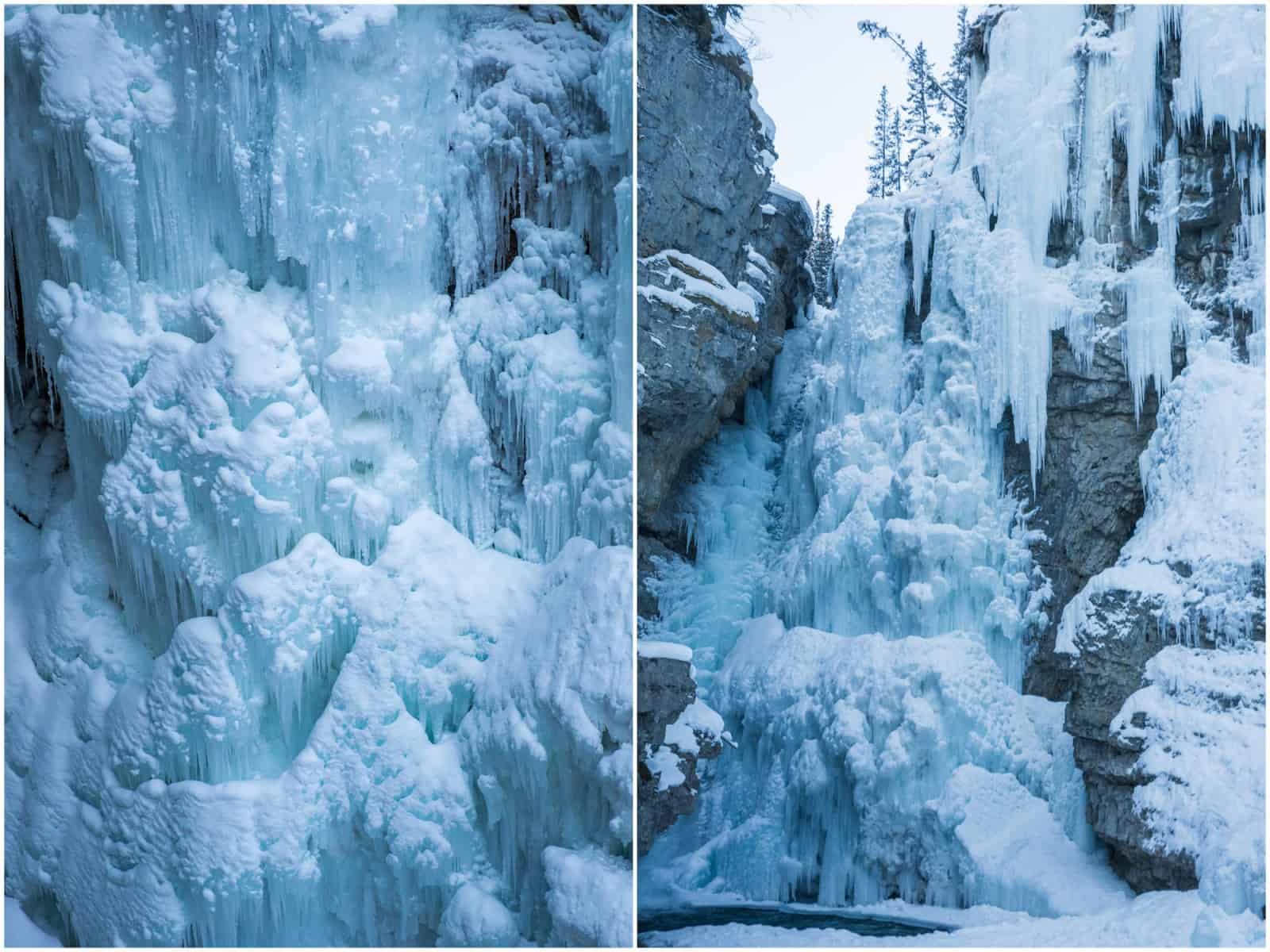 I was always last because I couldn’t stop taking photos and ogling the amazing ice formations. I had never seen anything like that before! Ice and frozen waterfalls that looked like blue stalactites in caves, I was in awe!

In one section you pop out at the bottom of a frozen waterfall, and you could still see the water tumbling down behind the ice in the most mesmerizing scene.

There are two sections of track leading to the upper and lower falls in the canyon, and definitely do both. If you go on a guided tour, you can warm up at the top with hot cocoa (YUS!) and maple cookies (OMG YUS I love Canada!).

You’ll probably get the chance to even see ice climbers at the top too, and can even go out yourself if you’re keen (it’s fun but hard). 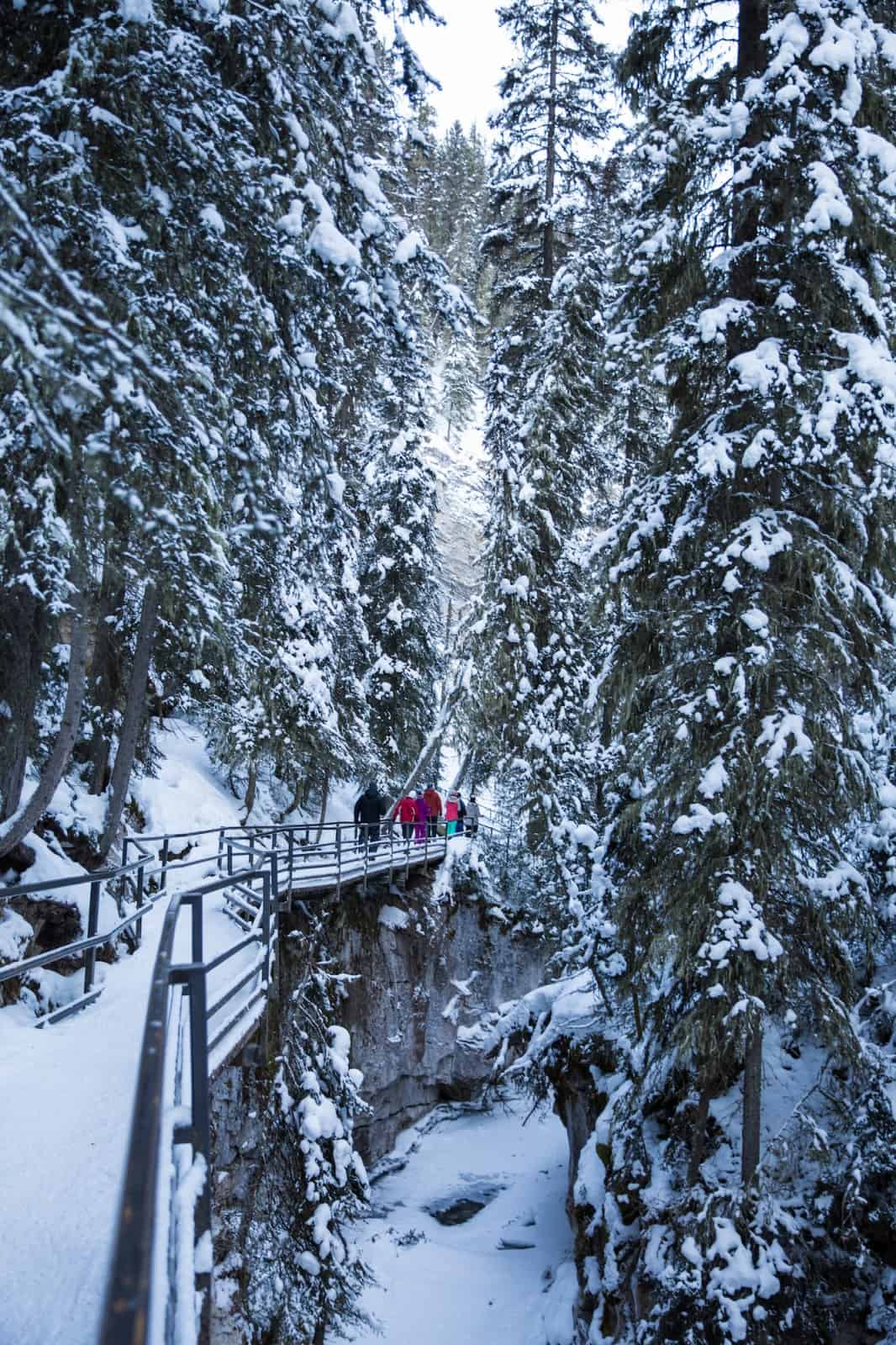 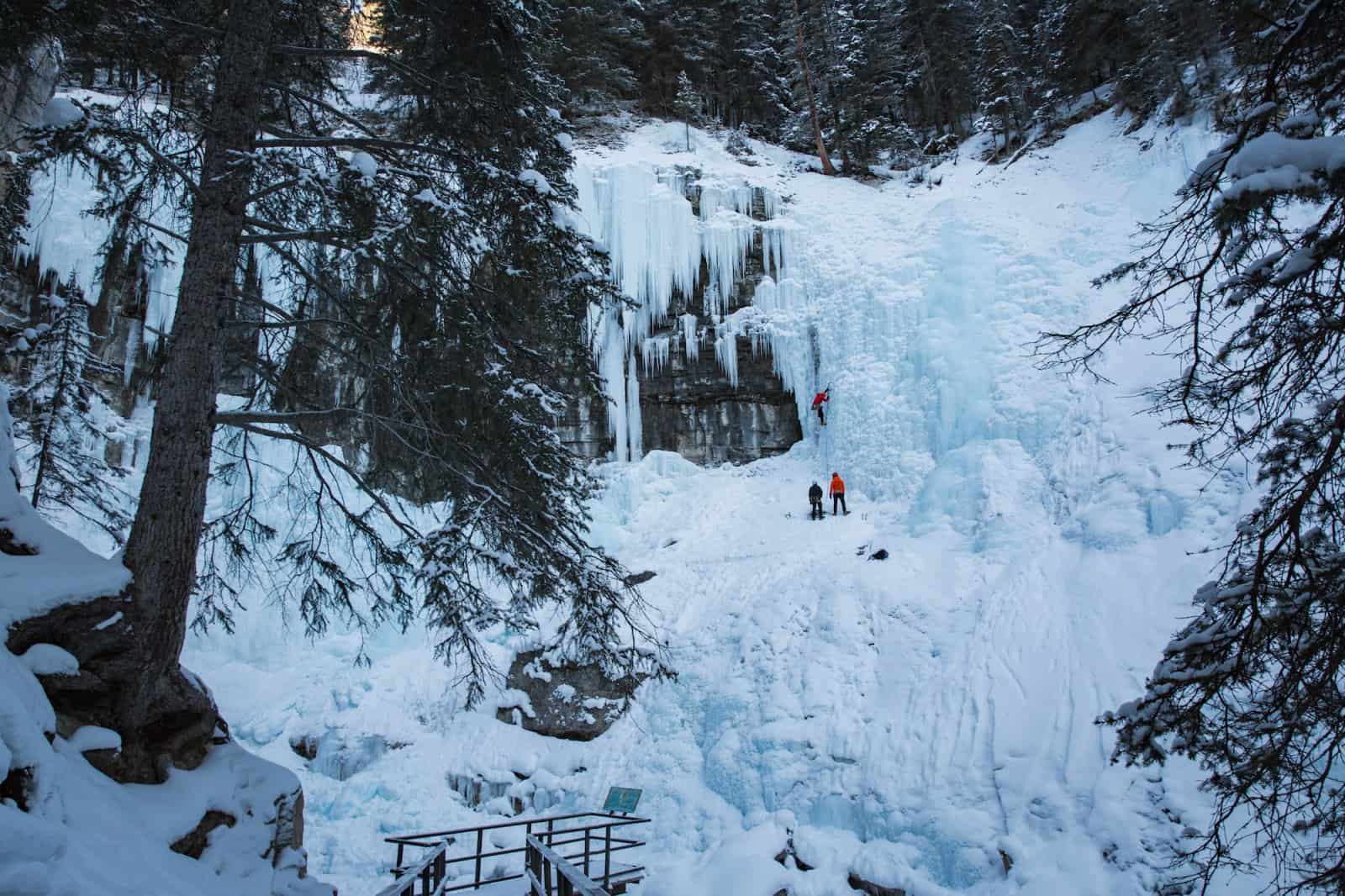 We spent a few hours wandering up and down Johnston Canyon and finally made our way out just as the sun began to climb above the steep cliffs promising a beautiful bluebird day in Banff.

It’s hard for places to live up to expectations when you put them on a pedestal (like I have the tendency to do), but oh man, did Johnston Canyon and Banff live up to the hype!

I’d go back in a heartbeat!

Where’s the coldest place you’ve ever been? What temperatures? Do you enjoy winter travel? Would you visit a frozen canyon like this? Spill! 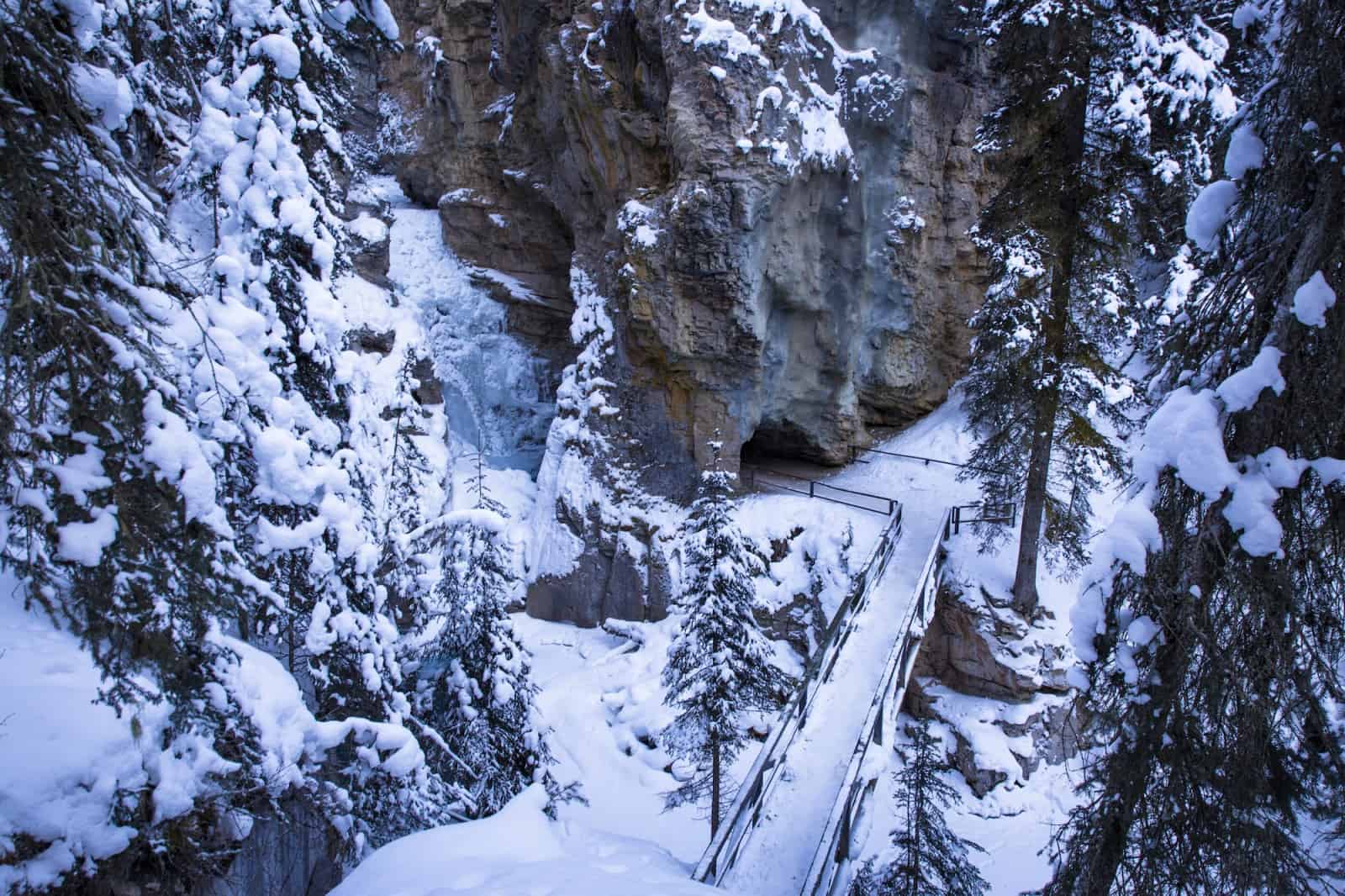 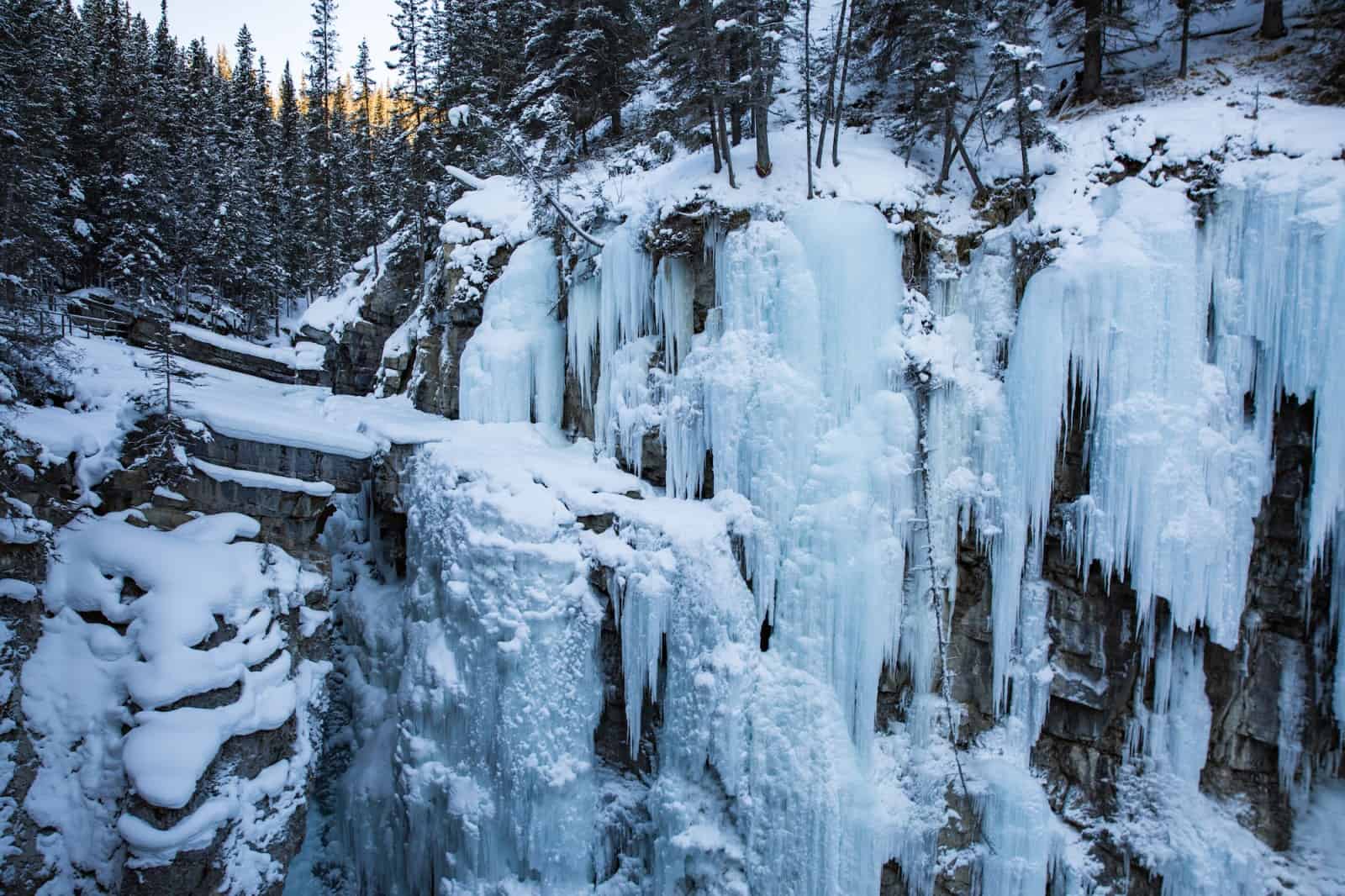 Many thanks to Travel Alberta for hosting me in Banff – like always I’m keeping it real – all opinions are my own, like you could expect less from me!

Written by Liz and was published on December 29, 2016 in Adventures, Canada, Destinations, North America 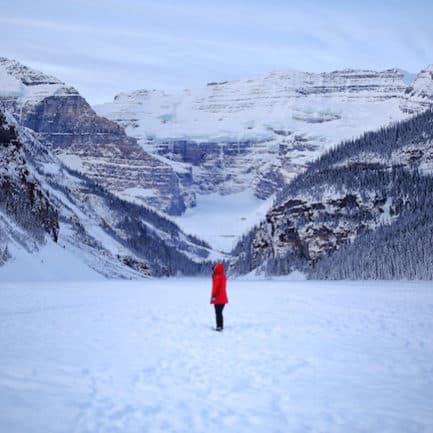 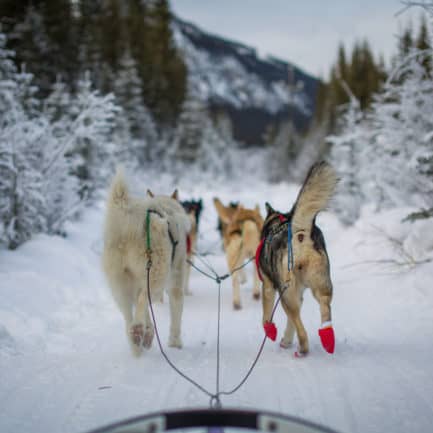 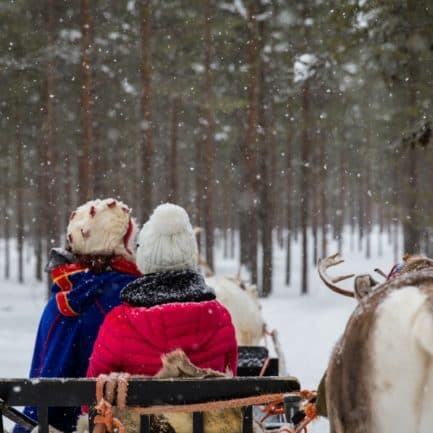