Home » Blog » Subantarctic Islands » A voyage to the Snares Islands

Many of us here in New Zealand operate under the belief that there is not much between us and Antarctica except a very unruly ocean. However that’s simply not the case.

Head due south from Stewart Island for 200 kilometers and you might stumble upon the first of many rocky and windswept islands – the Snares Islands.

Discovered by accident in 1791 when explorers were blown way off course on their way to Tahiti (wrong direction, mate) and ended up on a rocky outcrop of craggy islands considered rather hazardous to ships naming them “the Snares.” While I find the wild beauty of the subantarctic islands incredible, even I would be rather bummed if I landed here instead of Tahiti. 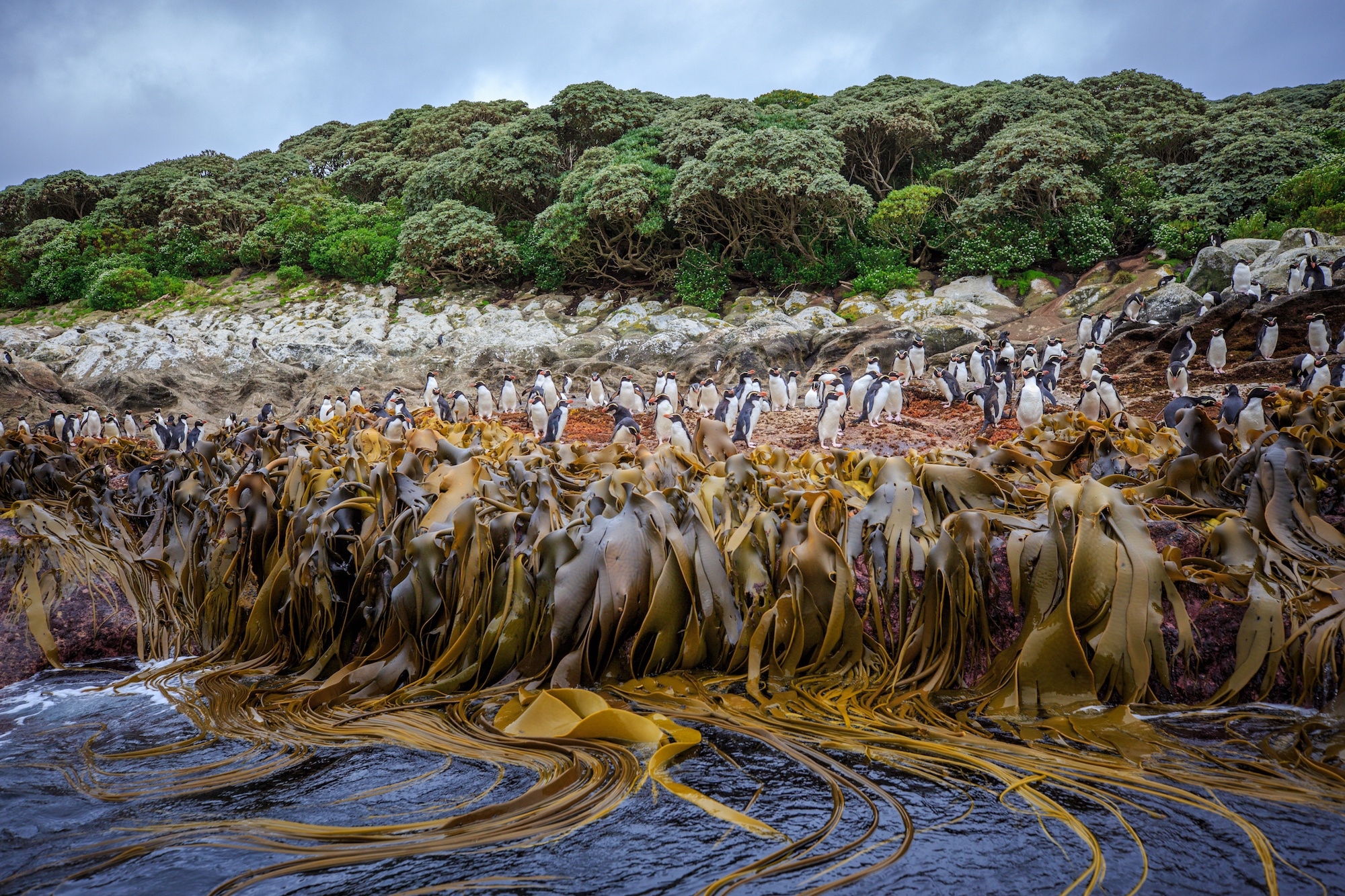 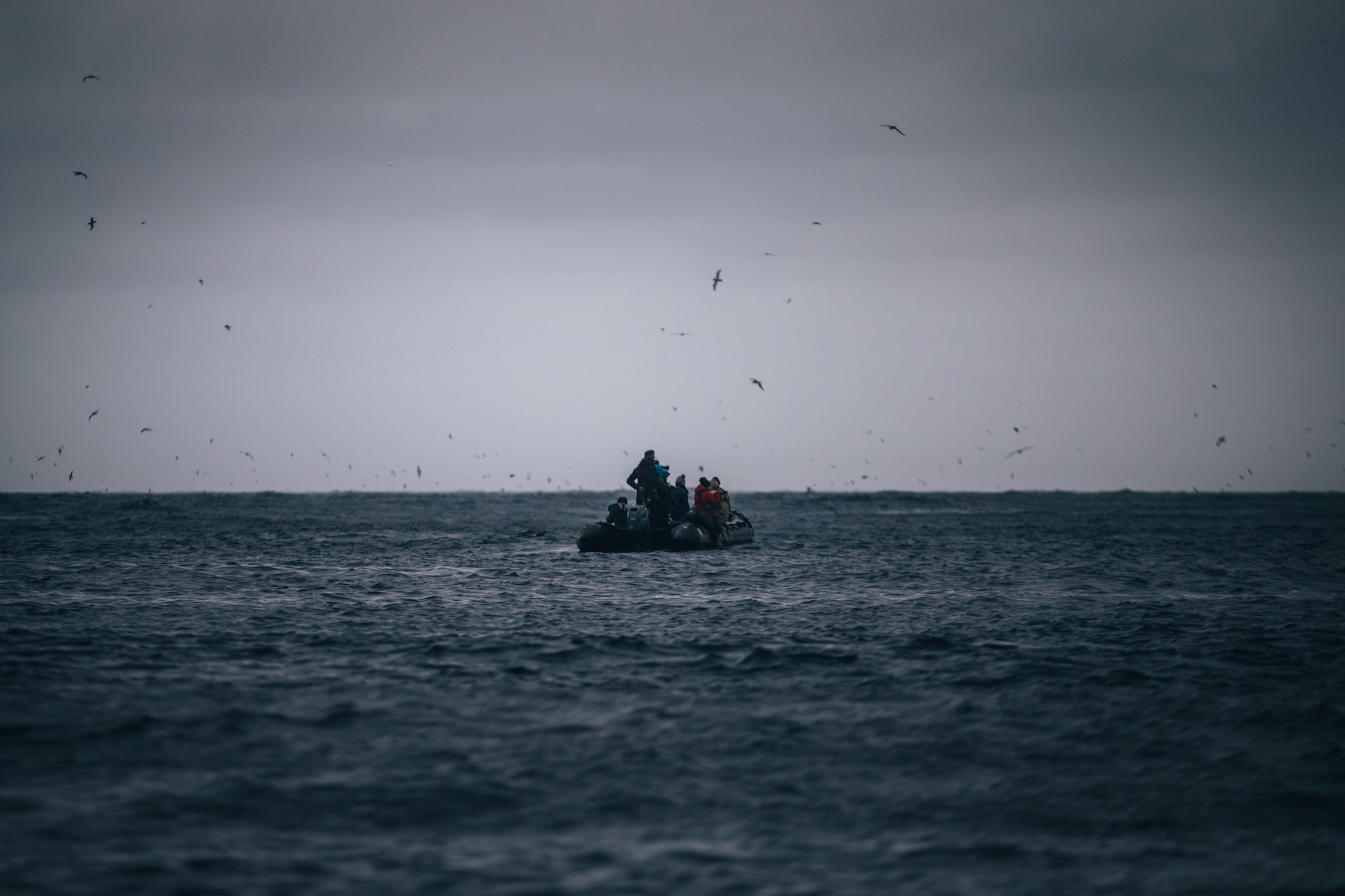 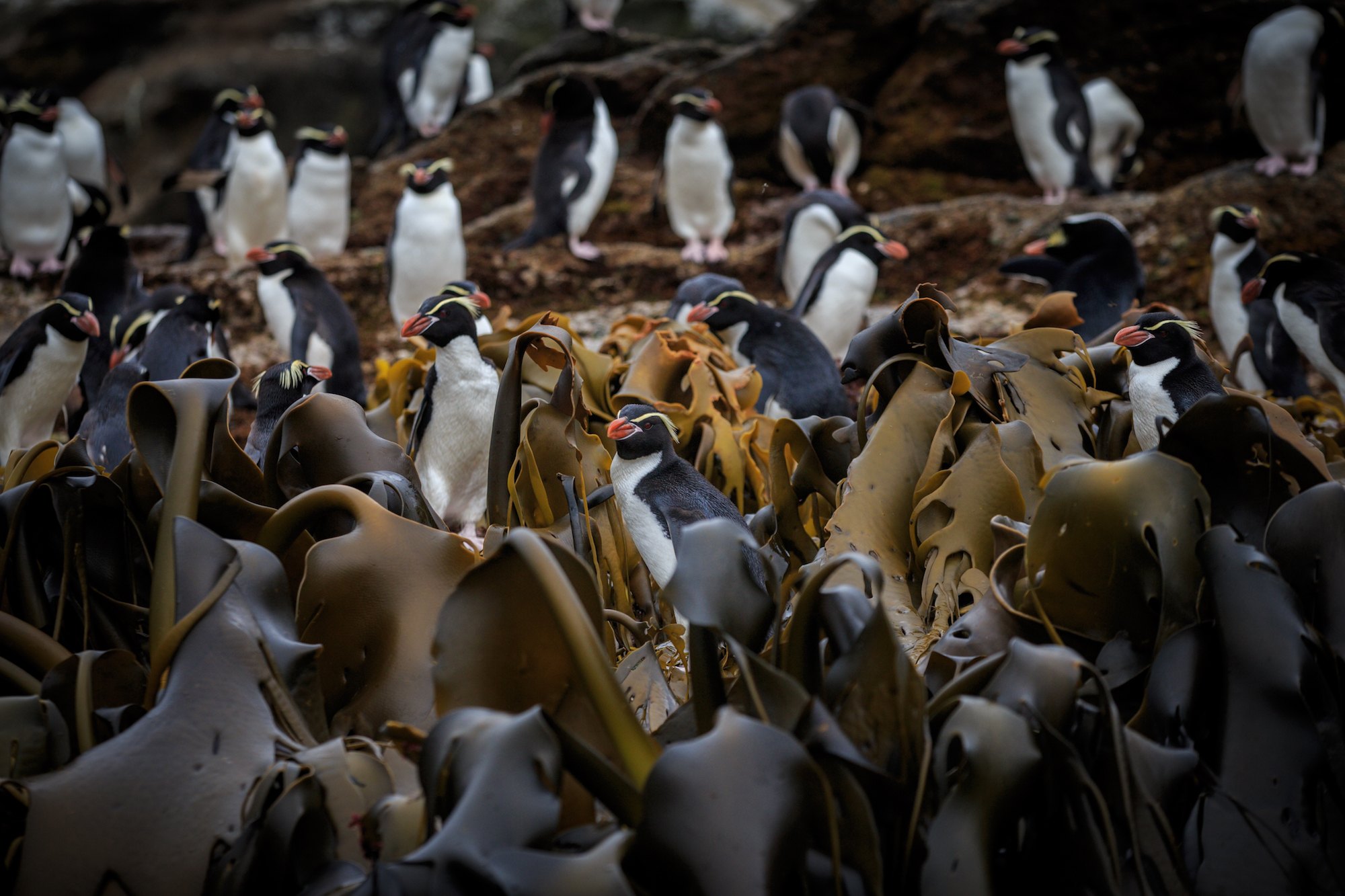 On most voyages south to the Antarctic and Subantarctic with Heritage Expeditions from New Zealand, you’ll likely pass and visit the Snares Islands.

My first introduction to New Zealand’s subantarctic, here I was greeted with a brisk wind slapping me in the face and a gaggle of penguins swimming around the ship after a day at sea in which many of my comrades became well acquainted with the toilet bowl.

Fizzing with excitement, I couldn’t wait for it to be our turn to climb down into a zodiac for a few exploratory cruises around the Snares. 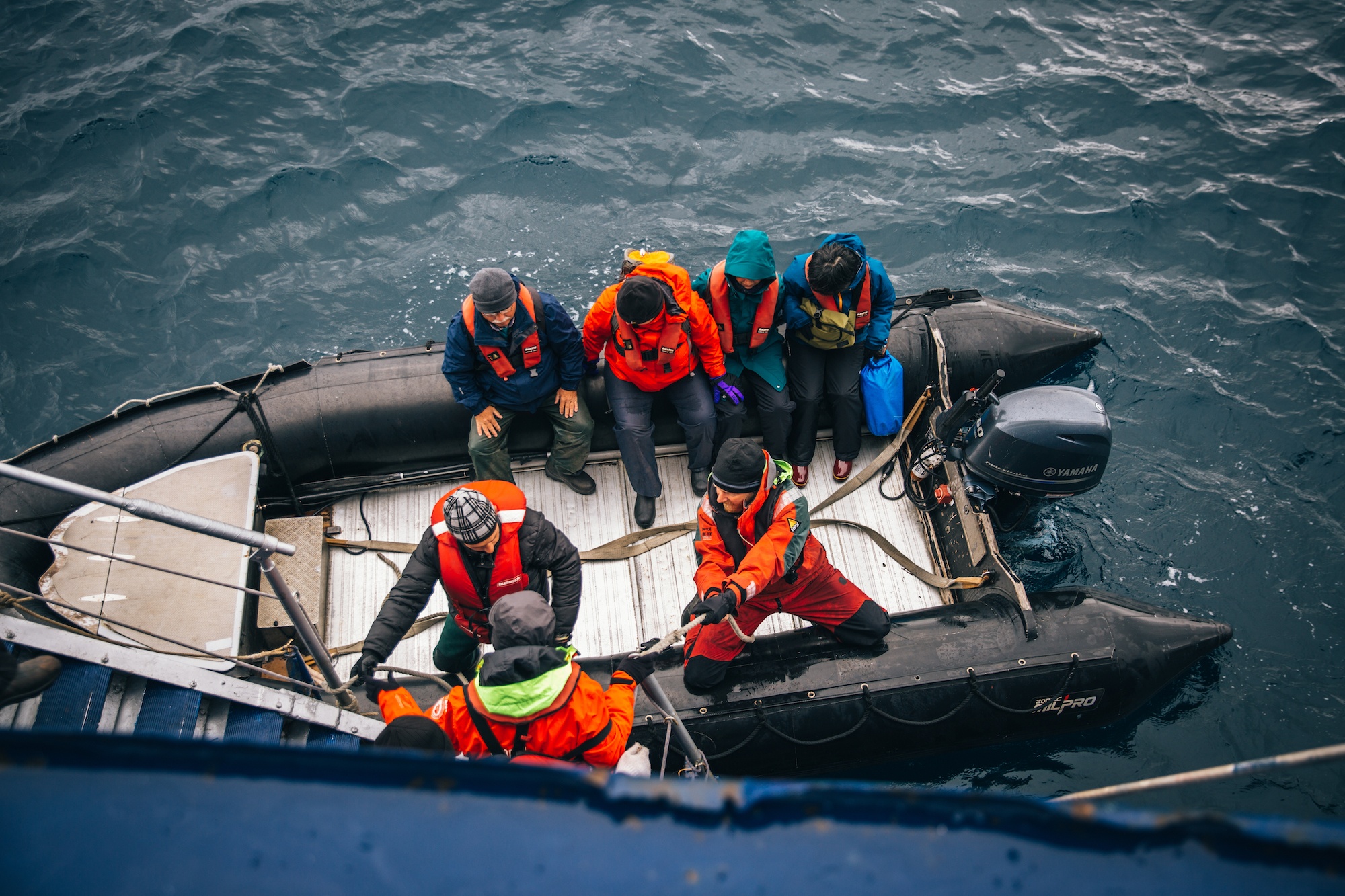 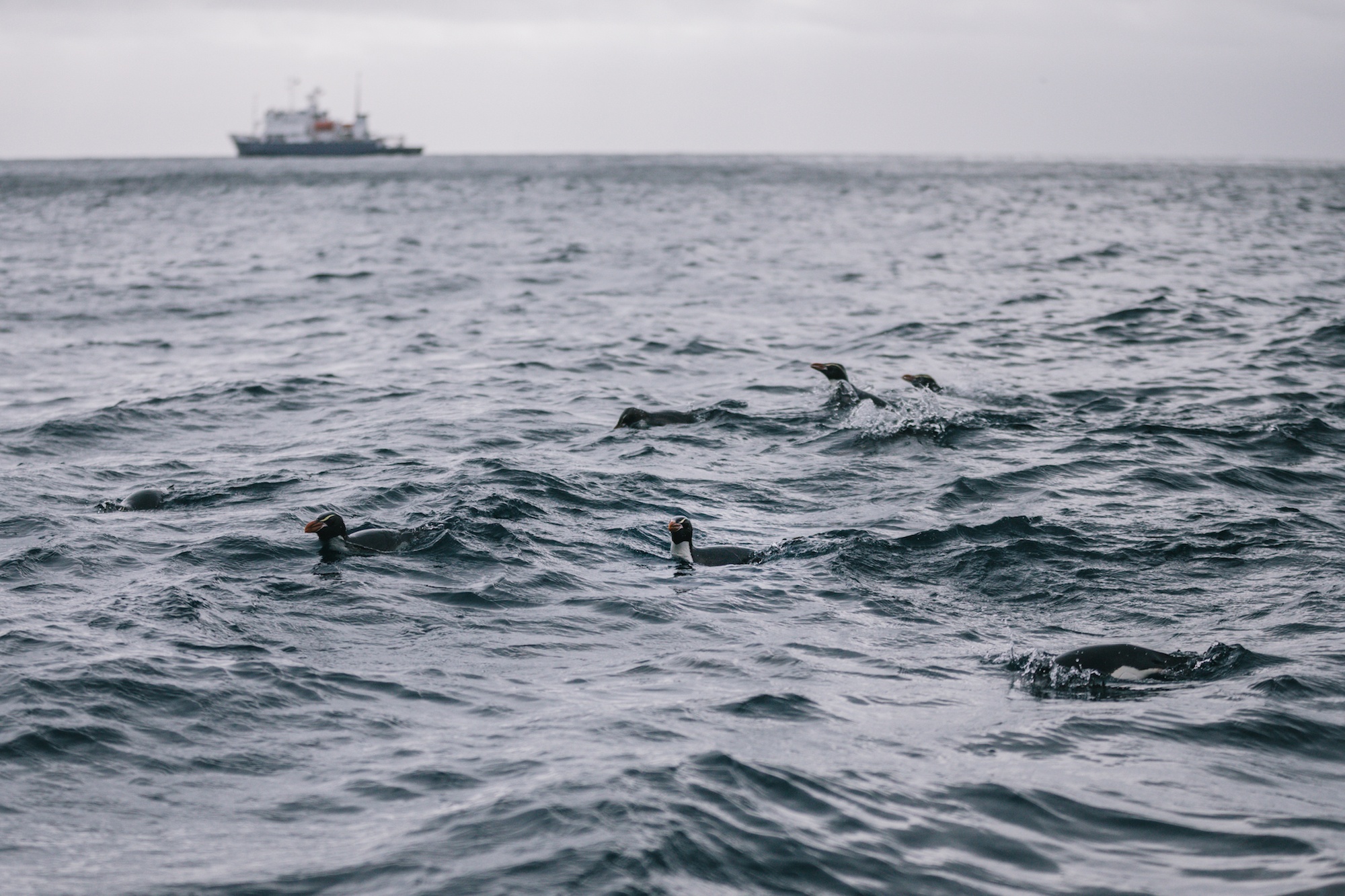 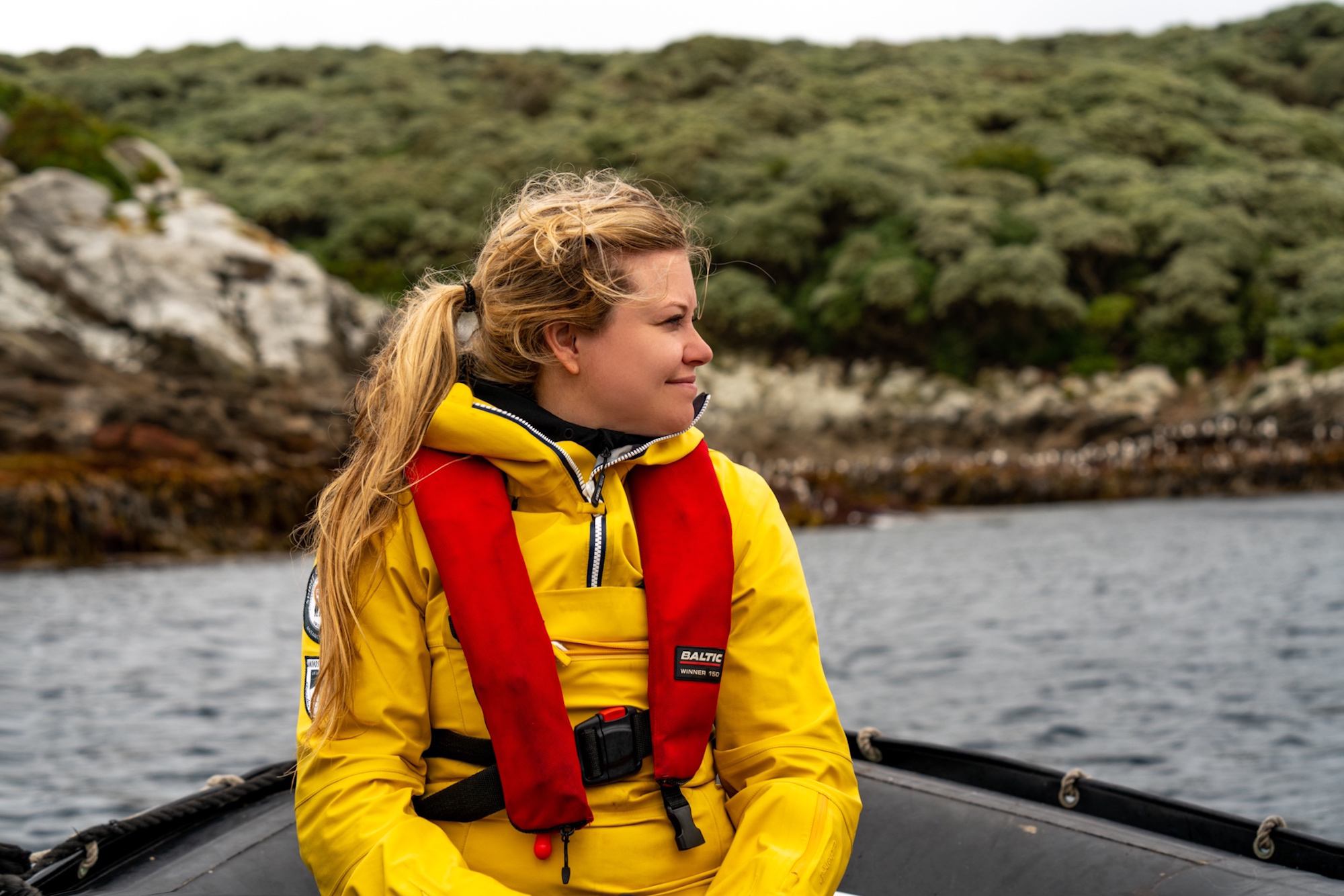 The Snares are the northernmost of New Zealand’s subantarctic islands and one of the most untouched and pristine areas in New Zealand.

Long before Europeans landed on these rocky shores, the Snares were known the Māori people as Tini Heke, as they can be seen from Stewart Island on a clear day

And to the detriment of the resident fur sea population, European whalers and sealers destroyed their populations within a few decades before leaving these rather desolate islands alone for the most part. 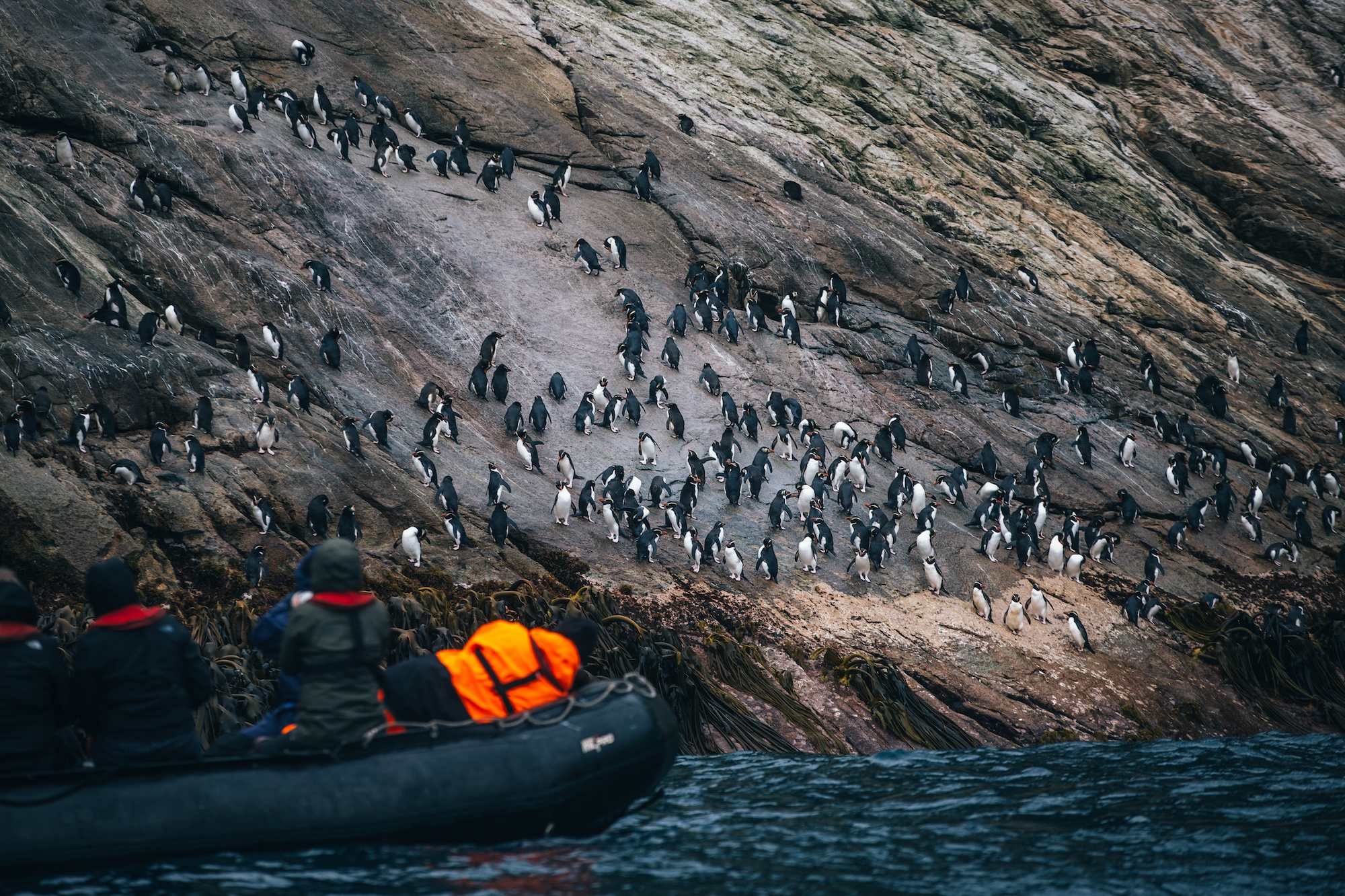 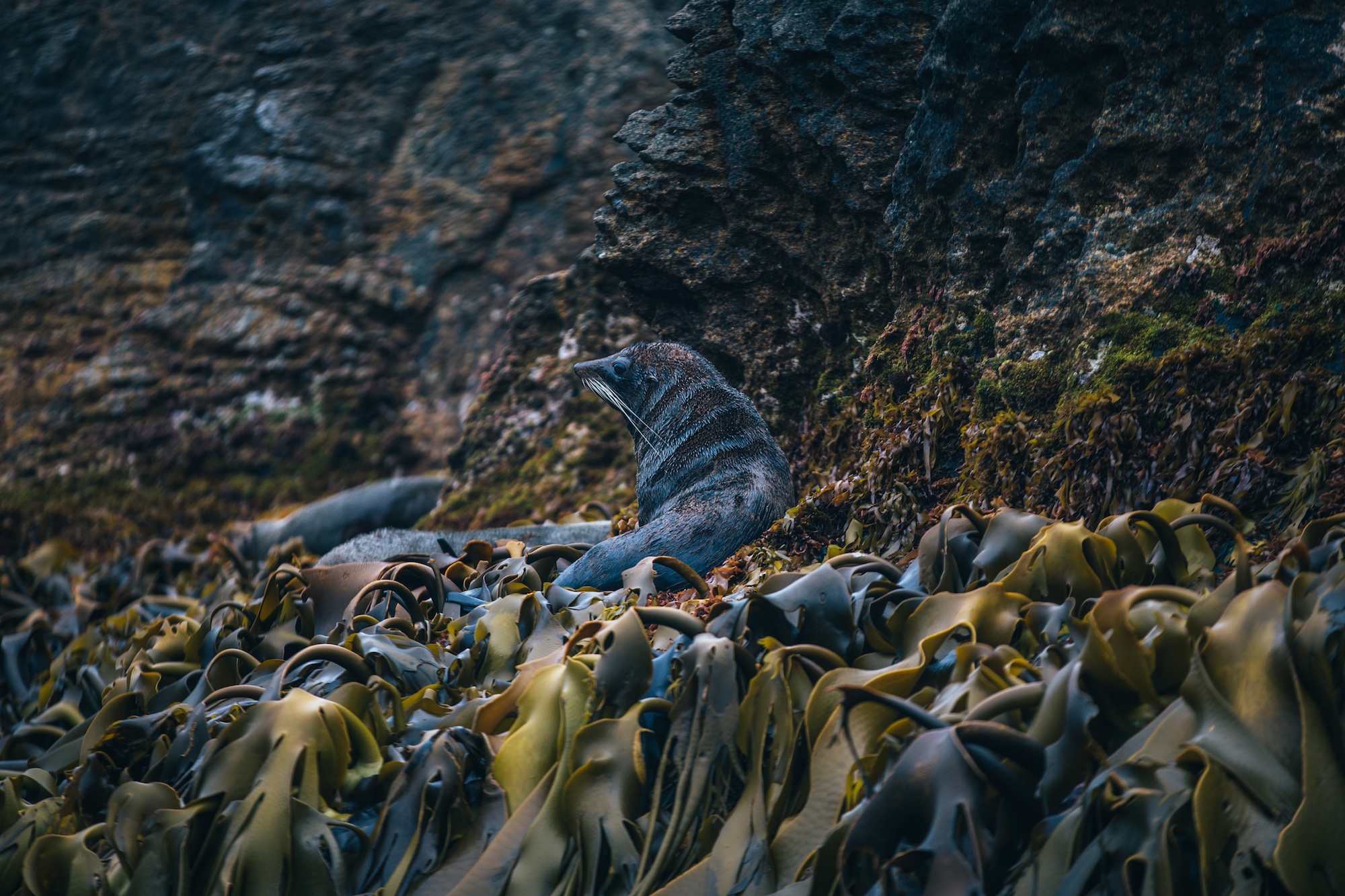 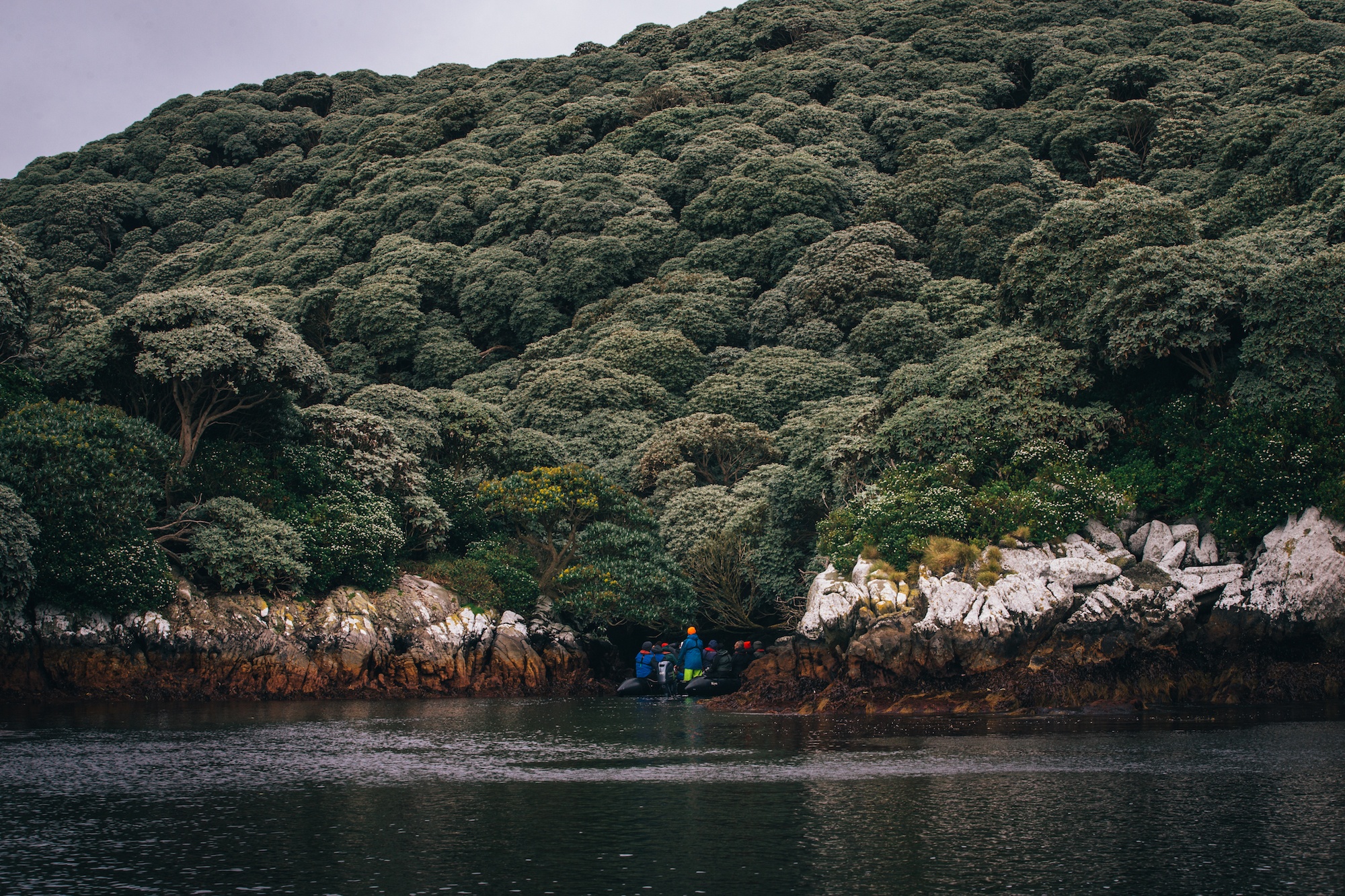 In fact, this is what makes the Snares Islands so special – between the lack of human settlement and no invasive mammal populations have ever been able to establish themselves on the islands, the native species here have thrived unlike anywhere else.

It also means that visitors can’t land on the islands, only cruise around them in a zodiac, keeping the island free of introduced biohazards, like foreign weeds or rats.

The islands enjoy a status of higher protection than others and are rated by the New Zealand Department of Conservation as “minimum impact islands”. meaning landing on the islands is generally prohibited or by special research permit only. Time to go back to university if I ever want to walk along these shores. 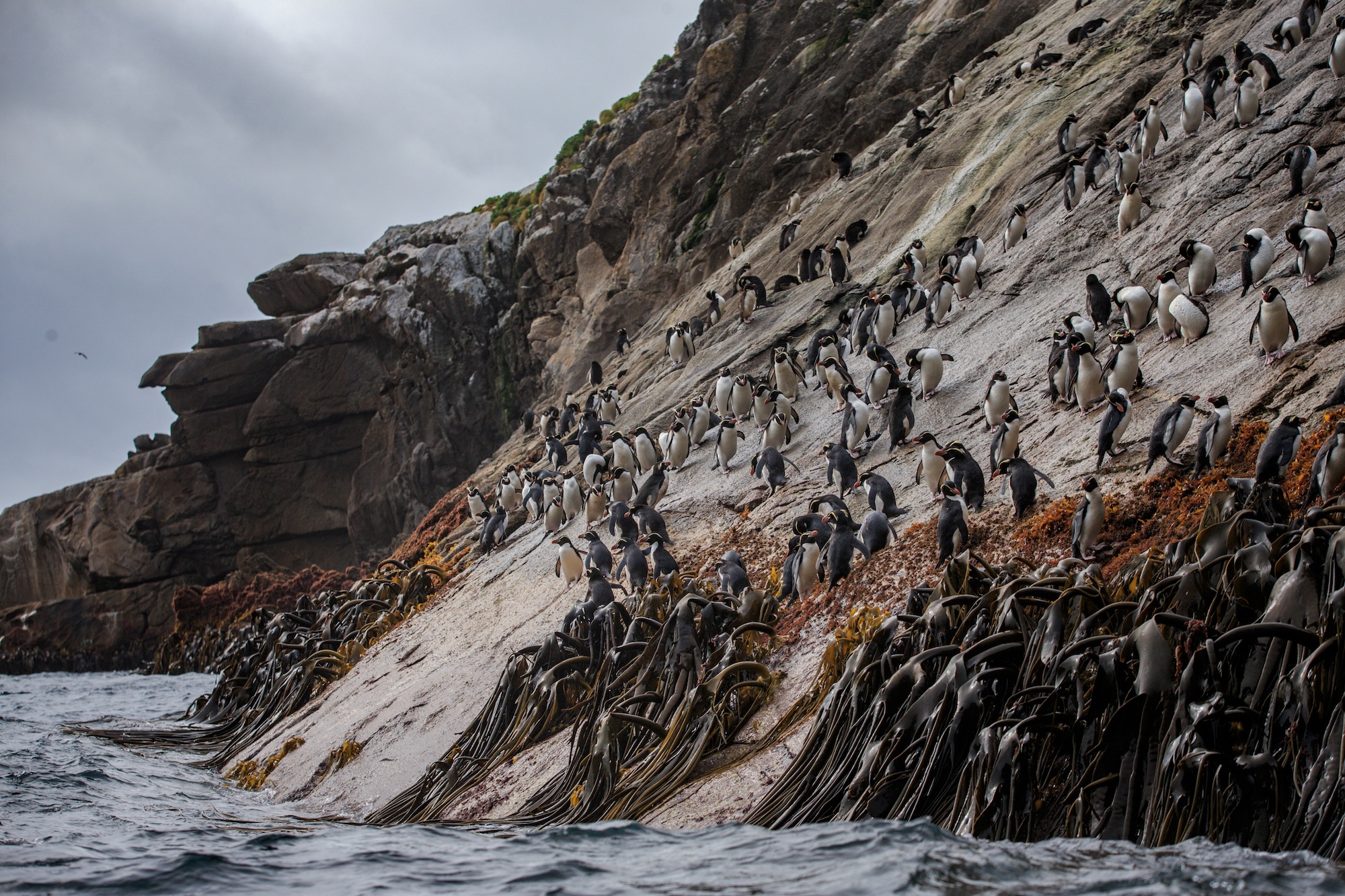 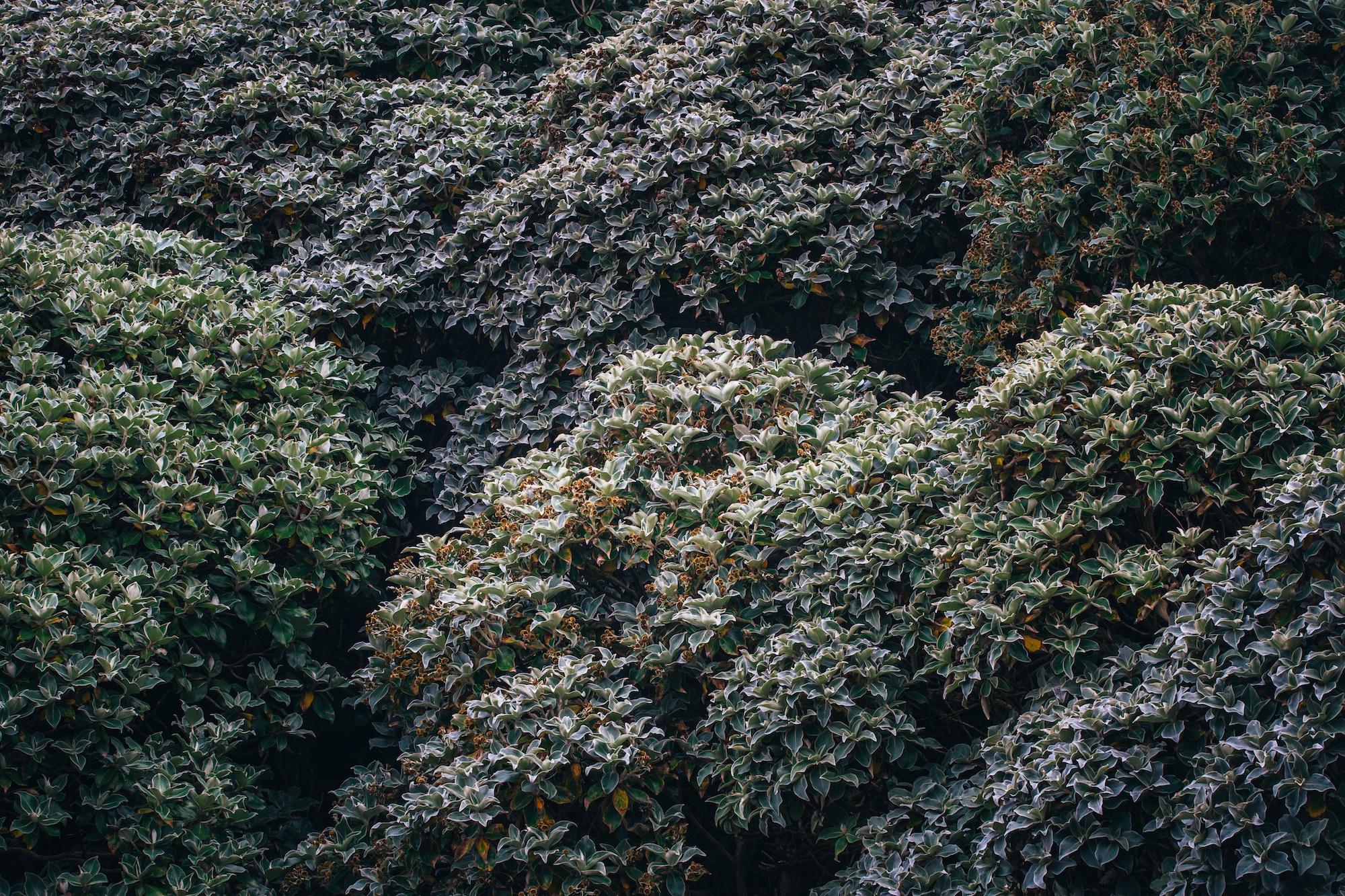 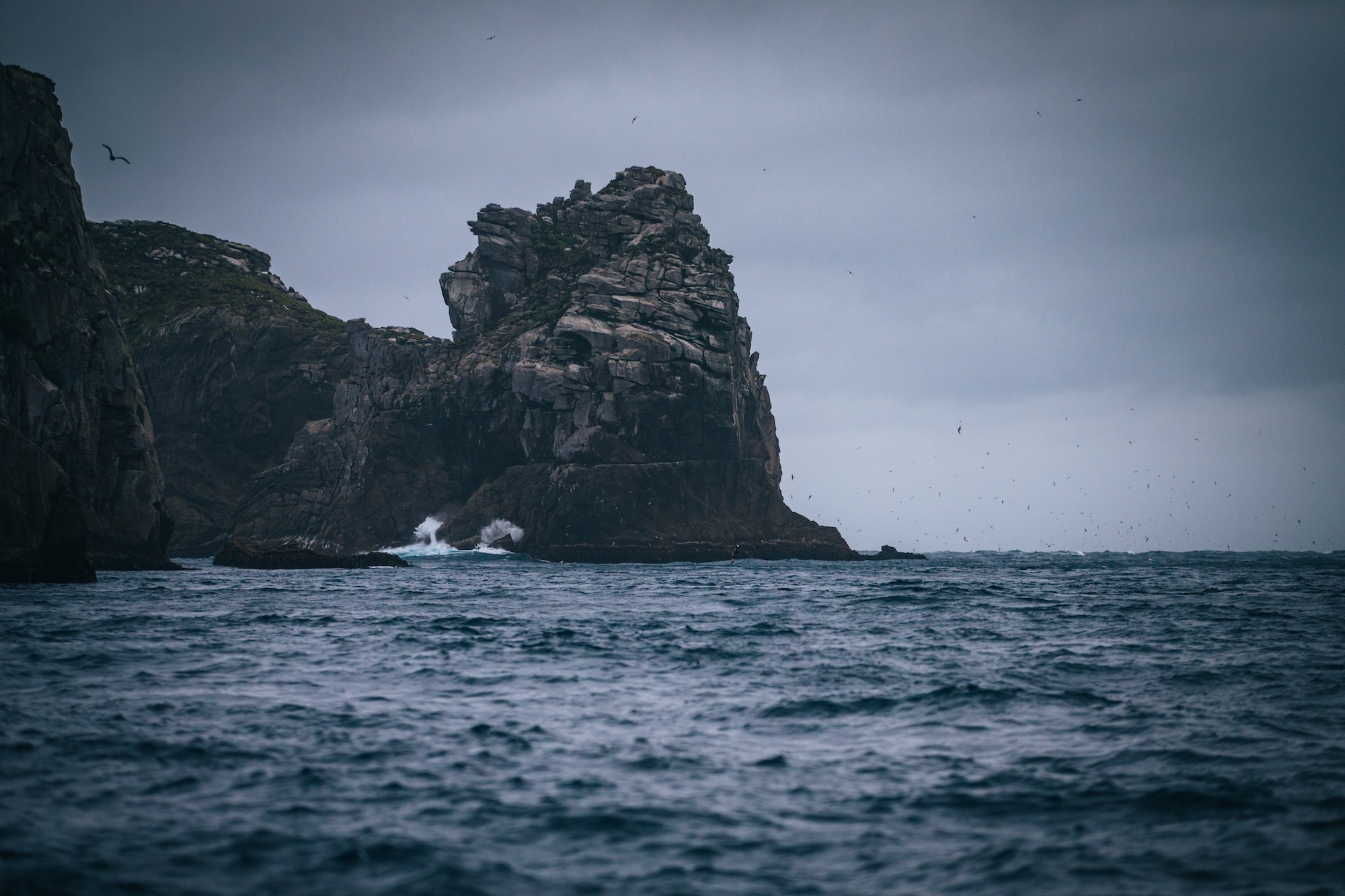 However, I’m not sure how far I would get considering how dense the foliage and bush is on the islands combined with it’s generally cliff-ness nature and slippery rocks.

A huge feature that’s unique to the Snares is that it’s heavily forested, covered in the gnarled tree daisy Olearia, which sounds rather like a name in Game of Thrones, as well as the megaherbs that make these subantarctic islands so famous among us nature frothers.

For me the Snares were almost the most colorful of the Subantarctic Islands, and I gazed in wonder for hours at the crystalline blue waters, yellow bulk kelp, white rocks covered in penguins (and penguin poo) and the lush green forests covering the islands.

It was almost a rainbow. 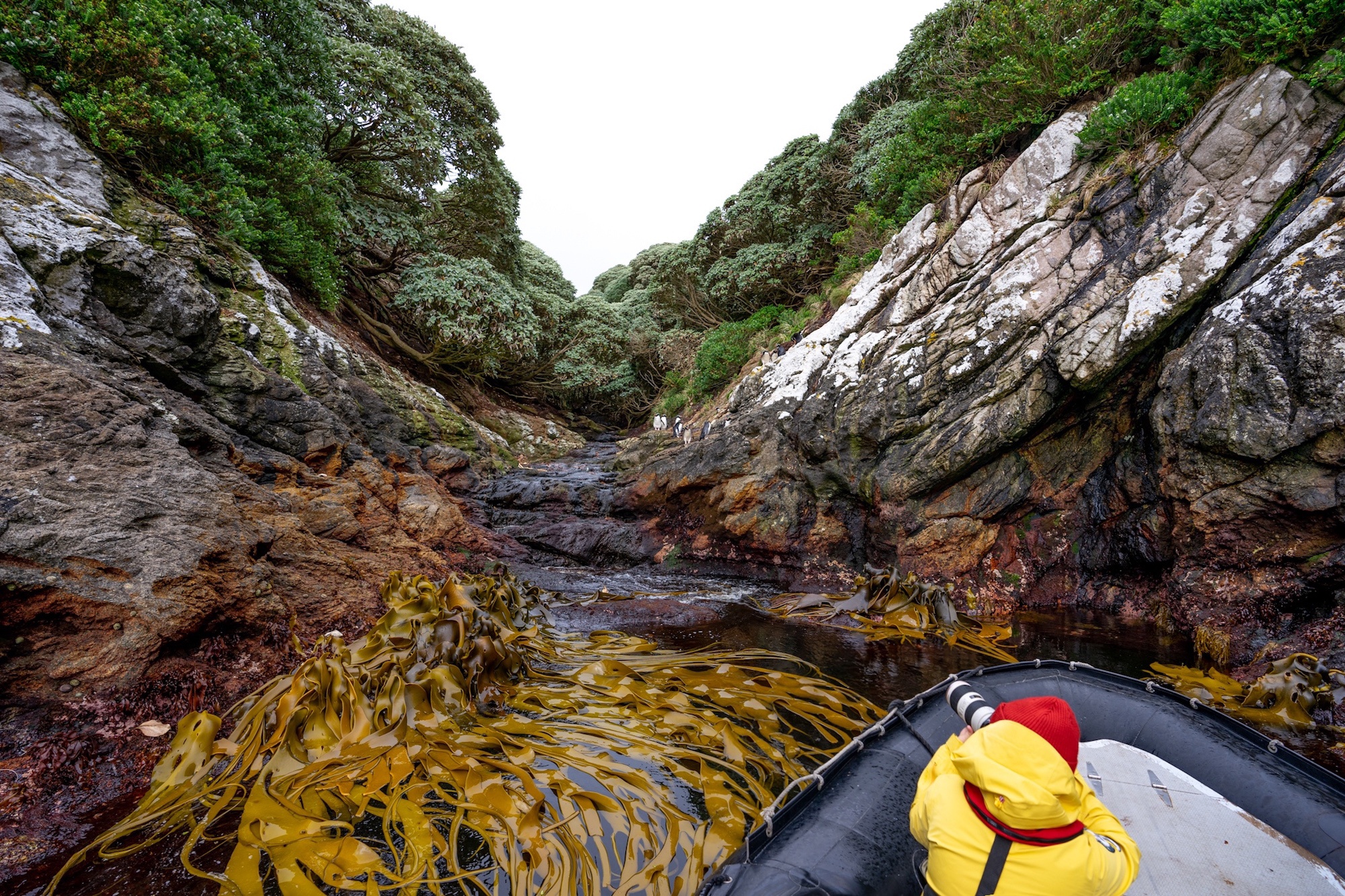 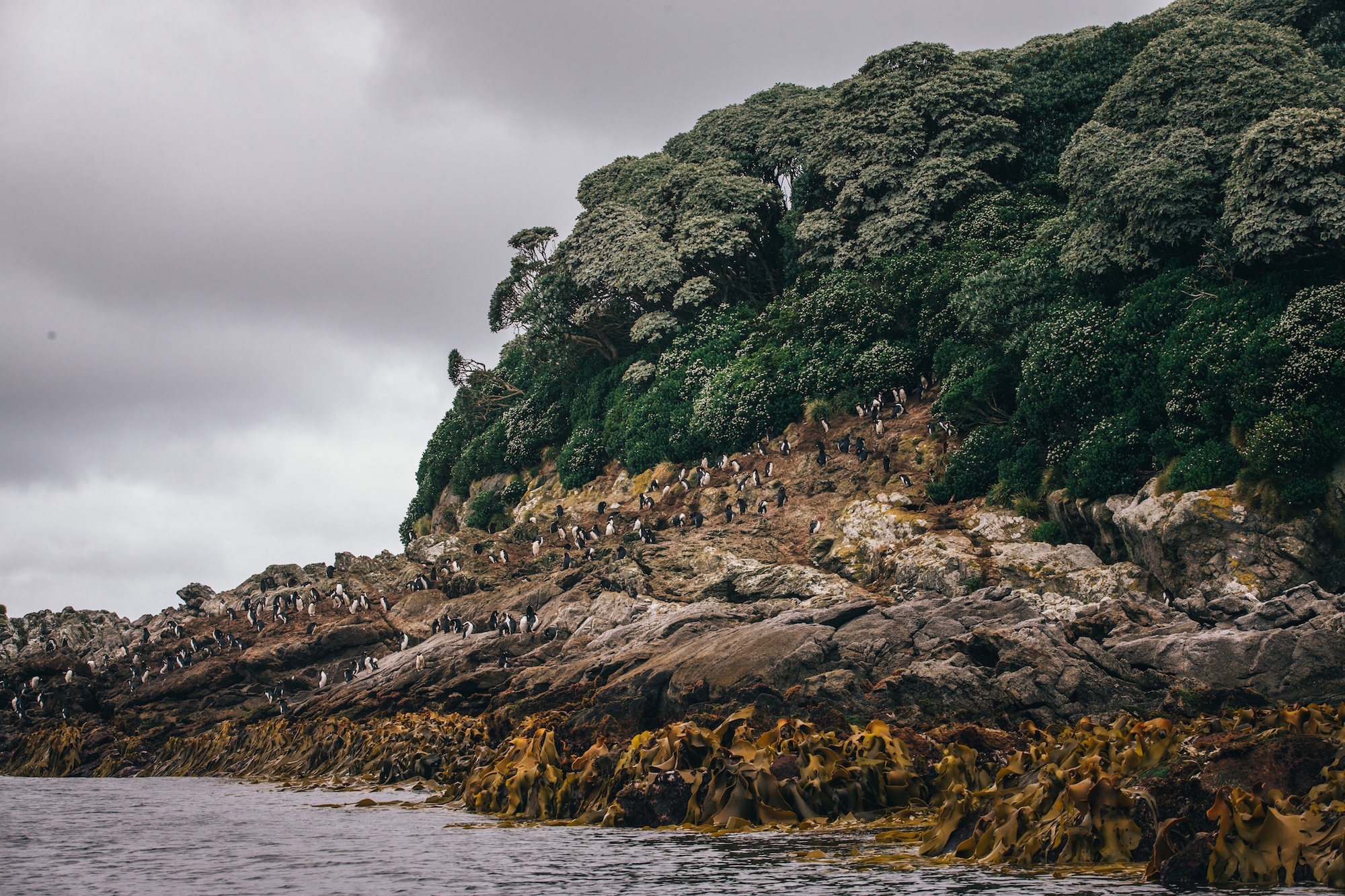 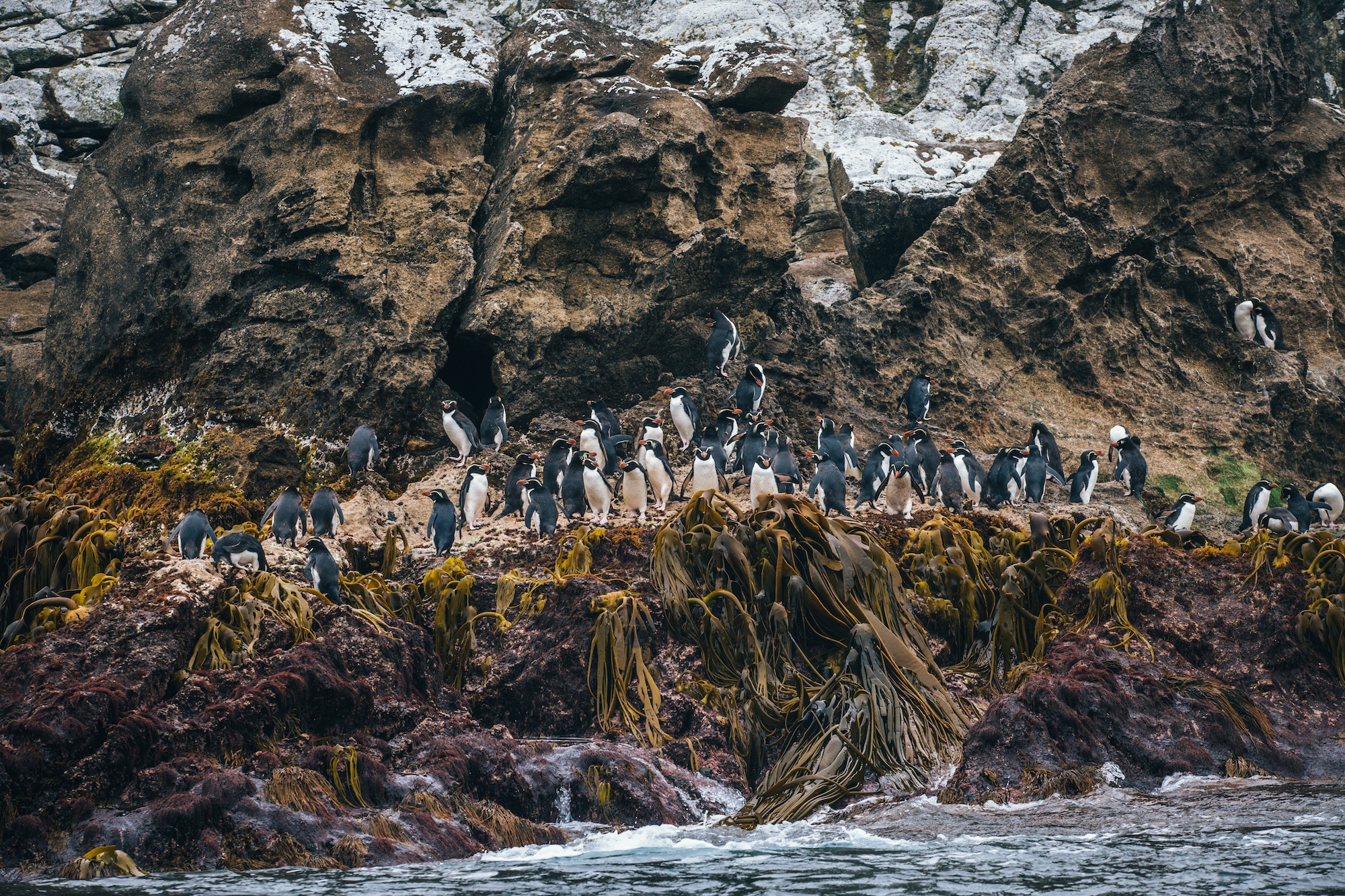 Without any introduced predators on the Snares (like feral cats or rats) the local birds have thrived, most notably the Sooty Shearwaters whose numbers count in the millions as well as many diving petrels. We were surrounded by them as soon as we set off in the zodiac towards the islands, but quickly diverted as  spray of water appeared on the horizon indicated whales were nearby.

Pausing and watching the horizon, we were all giddy with excitement to see that actually it was an orca swimming around the ship, something we don’t get to see every day, only to look up and see Buller’s Albatross gliding high in the skies.

The wildlife experiences down in the Subantarctic truly are unparalleled, and I haven’t even gotten to the penguin colonies yet. 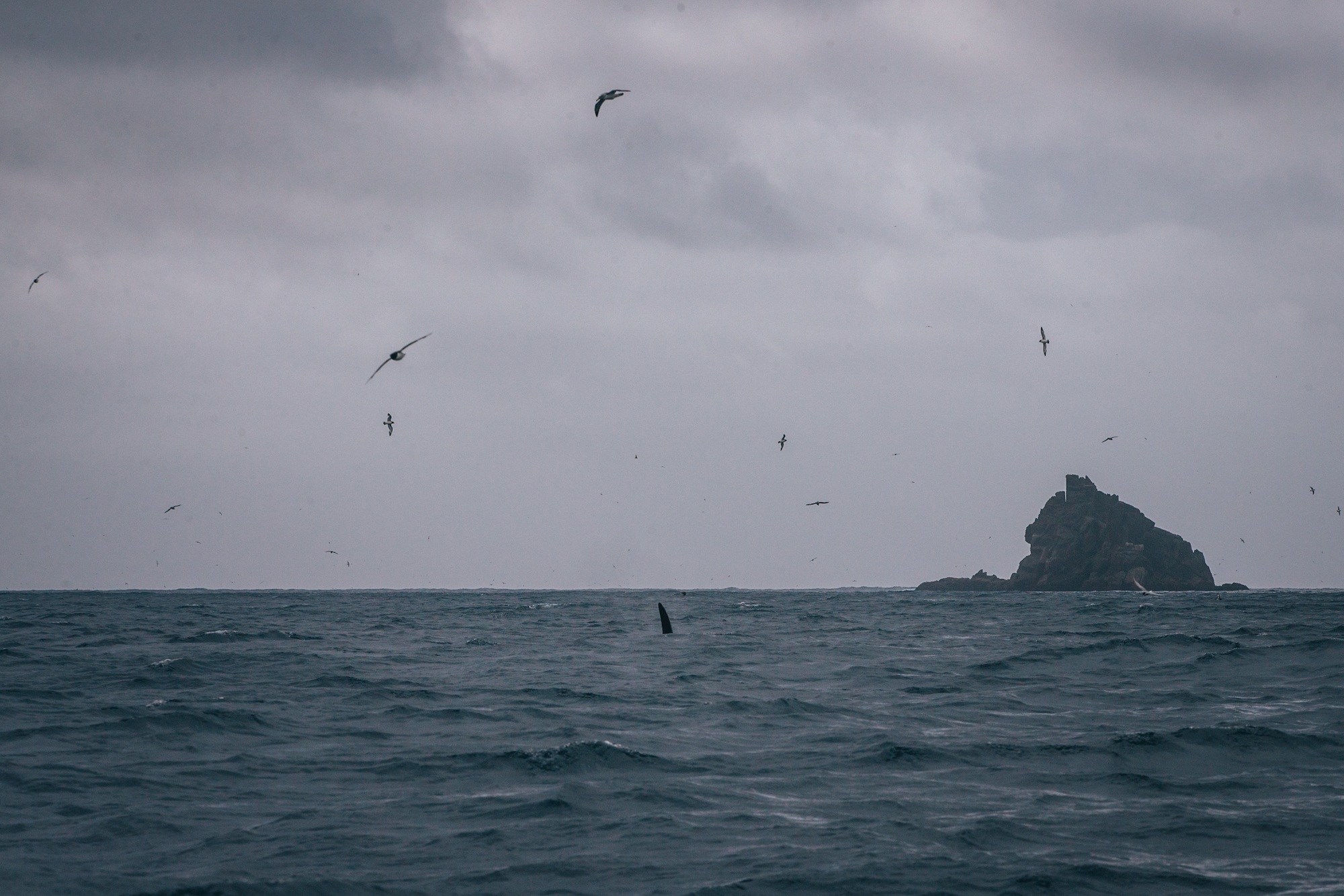 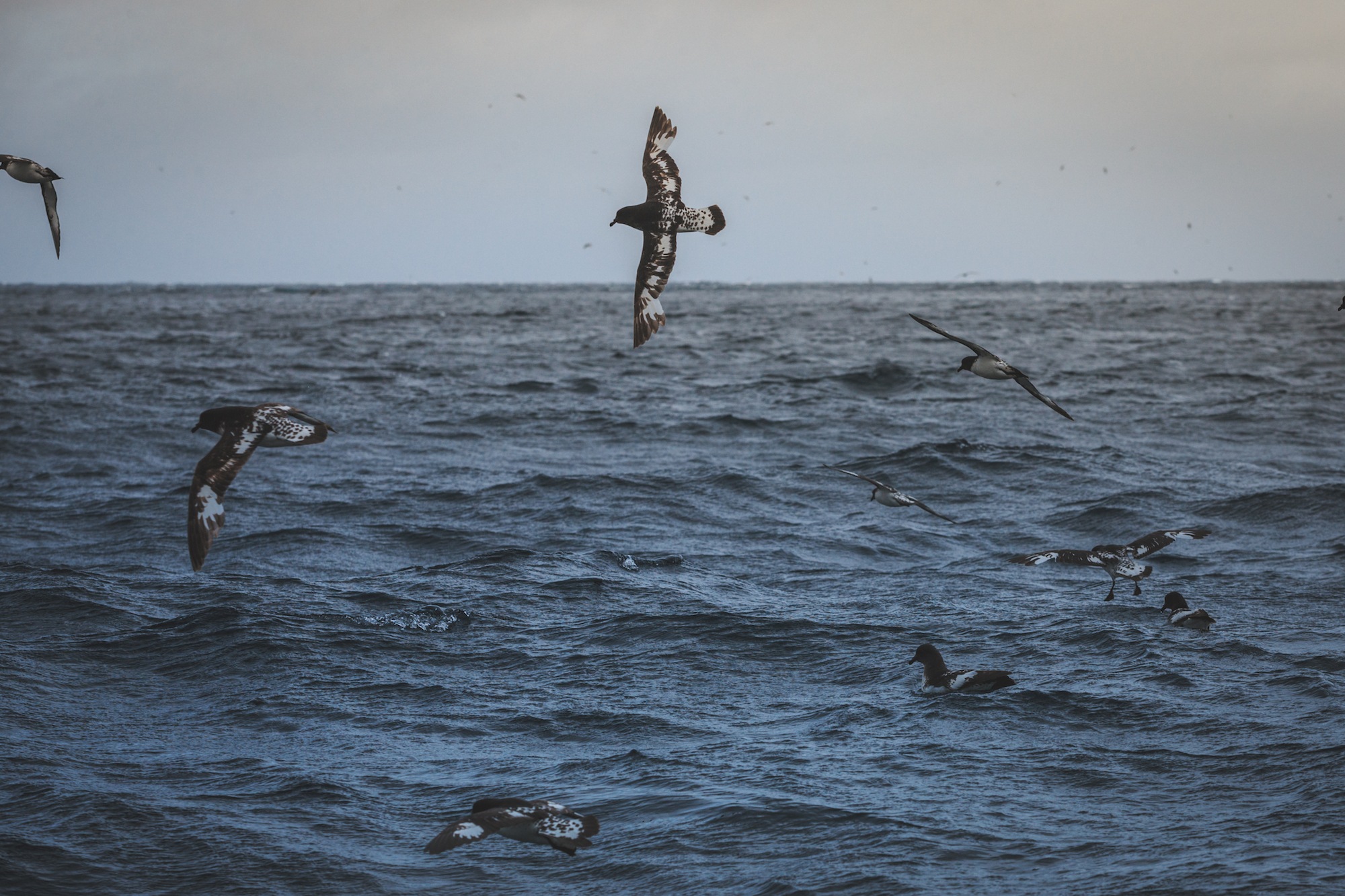 While many penguins roam and range and nest around the subantarctic islands, you’ll find the unique Snares Crested Penguin only on the Snares and are estimated to around 30,000 breeding pairs here.

Absolutely abundant here, the waters around the island are teeming with the penguins and, it was just incredible to see so many of them in one place. Similar to the Fiordland crested penguin we have in New Zealand which is endangered, here we count ourselves extremely lucky to spot just one, whereas on the Snares Islands we easily saw thousands.

I always think the crested penguins with their fluffy yellow eyebrow feathers are the rockstars of the penguin world. 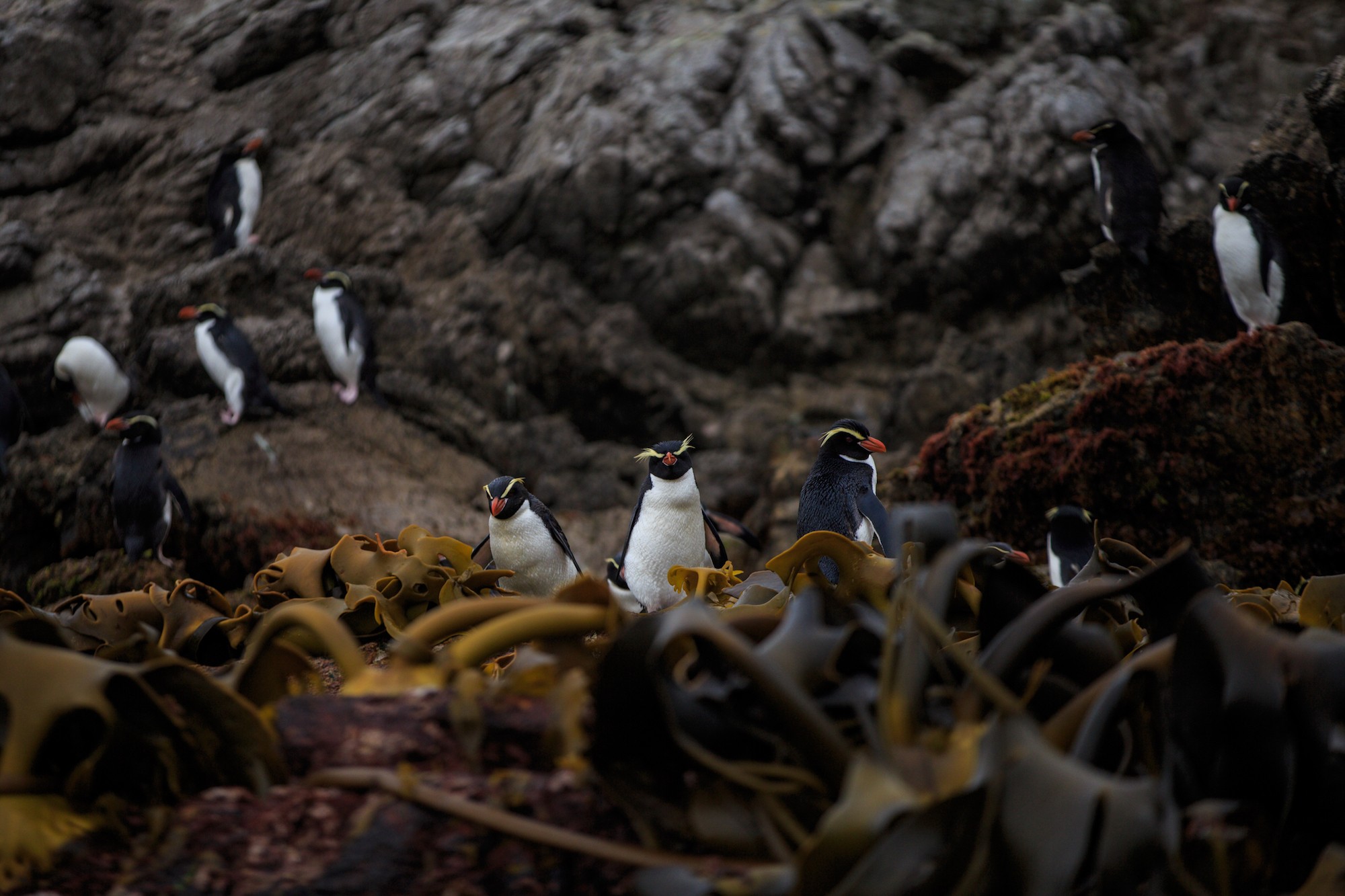 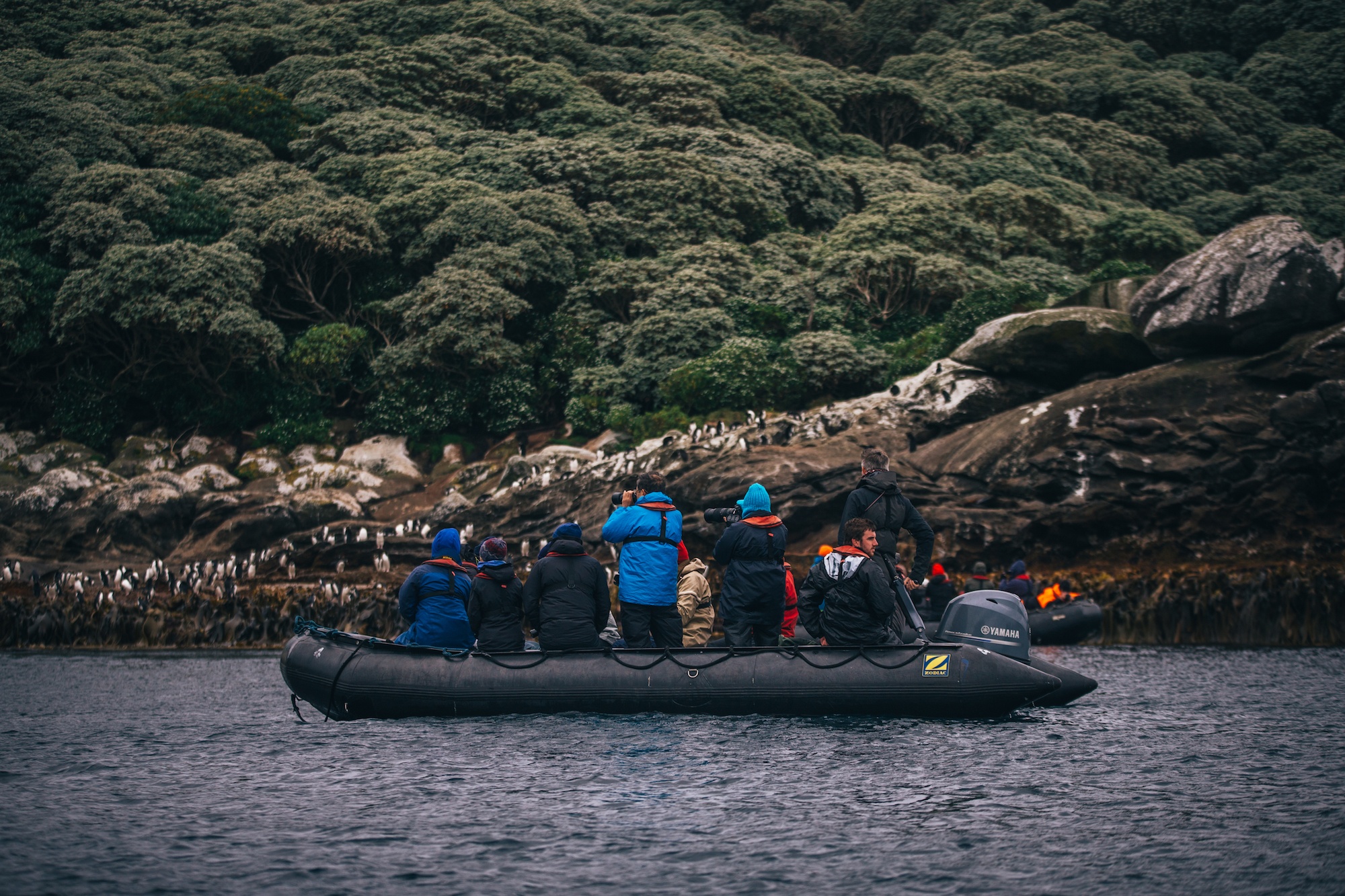 Considering how clunky penguins look when they’re waddling about on land, I always find it incredibly impressive to see how they can get up onto these rocky, slippery, seaweed covered cliffs with just their feet.

Conditions permitting there’s an incredible rock wall cliff that looks almost like a slide that the penguins use daily to get to and from the sea to their colony above.

Waiting for the perfect moment with the tide and waves, the penguins will launch themselves out of the water like a rocket up onto the rock wall before climbing their way up towards home after a day fishing at sea.

Alternatively we watched more than a few tumble ungracefully down off the rocks into the water below. 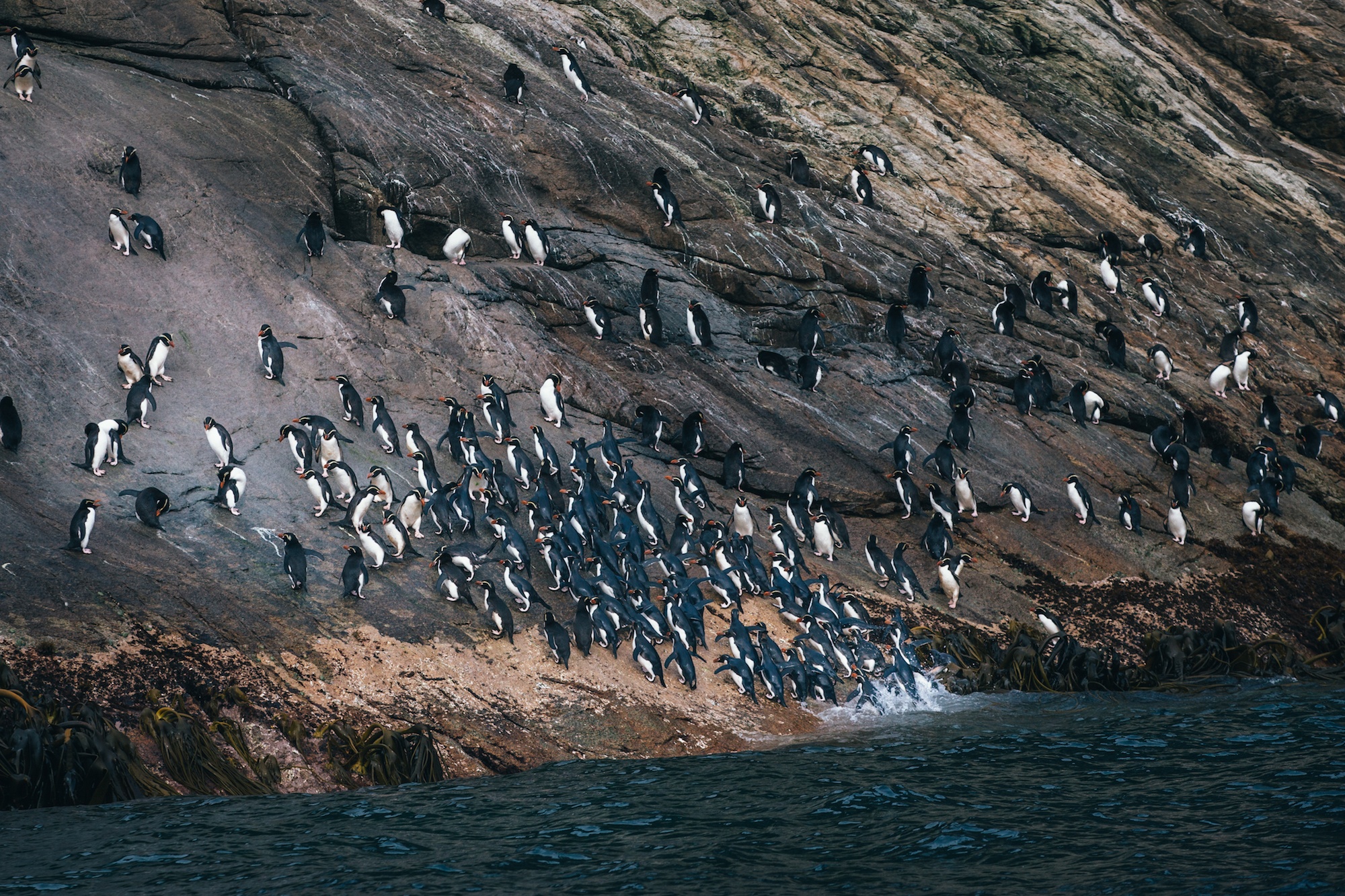 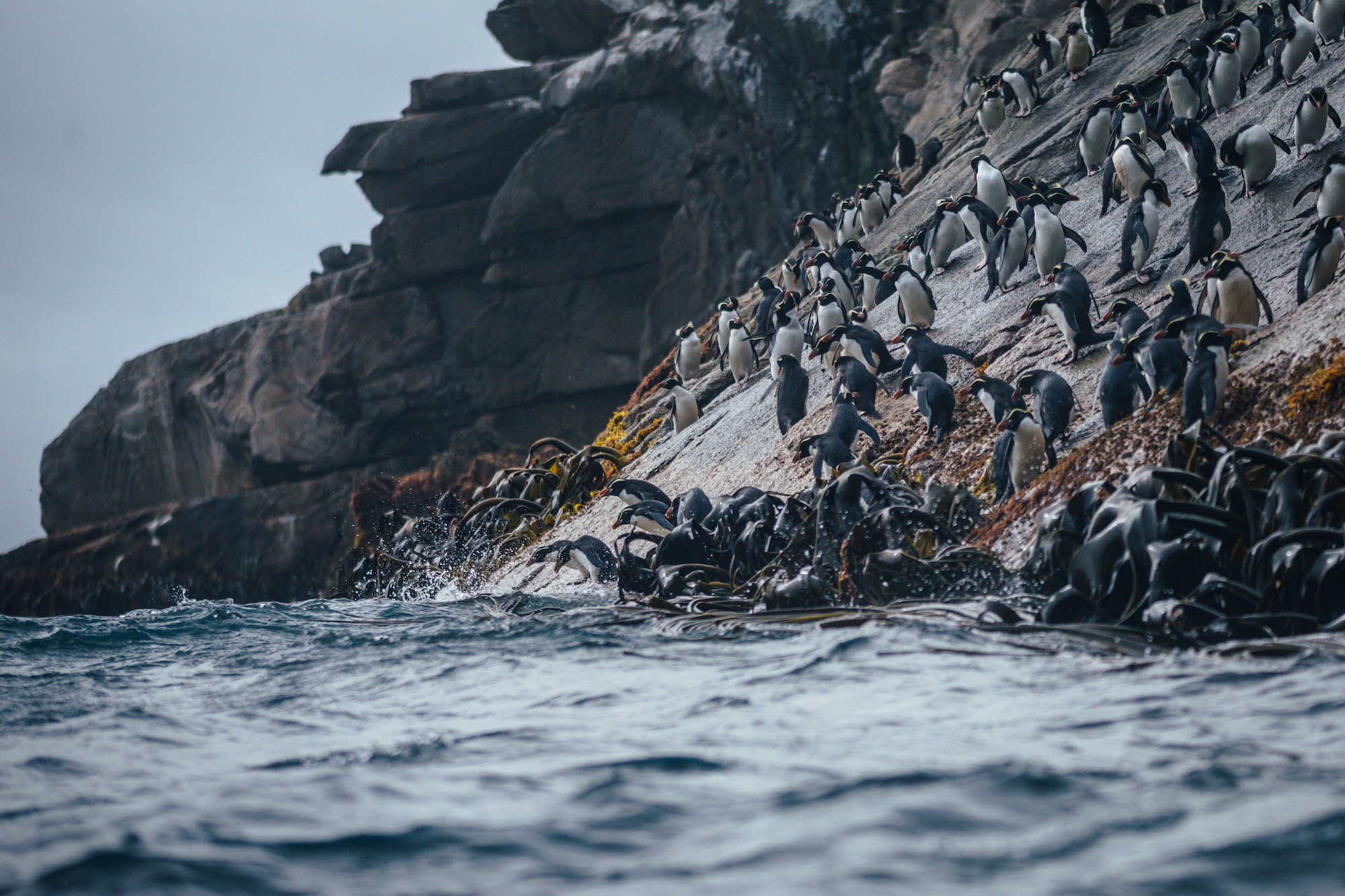 A perfect introduction to New Zealand’s subantarctic, the Snares was a place that truly got under my skin and made me want to hunker down and stay a while.

Stunning in its wild beauty, enormous bird colonies and general air of mystery about it since so few have either been there or landed there, the Snares is a the perfect example of how New Zealand and its outer remote islands could be if we allow nature to reclaim the land without interference.

Fingers crossed the rest of our beautiful islands can regenerate and grow in the same way soon.

Have you ever been to New Zealand’s subantarctic islands or heard of the Snares? Is this the kind of place you’d love to visit? Spill! 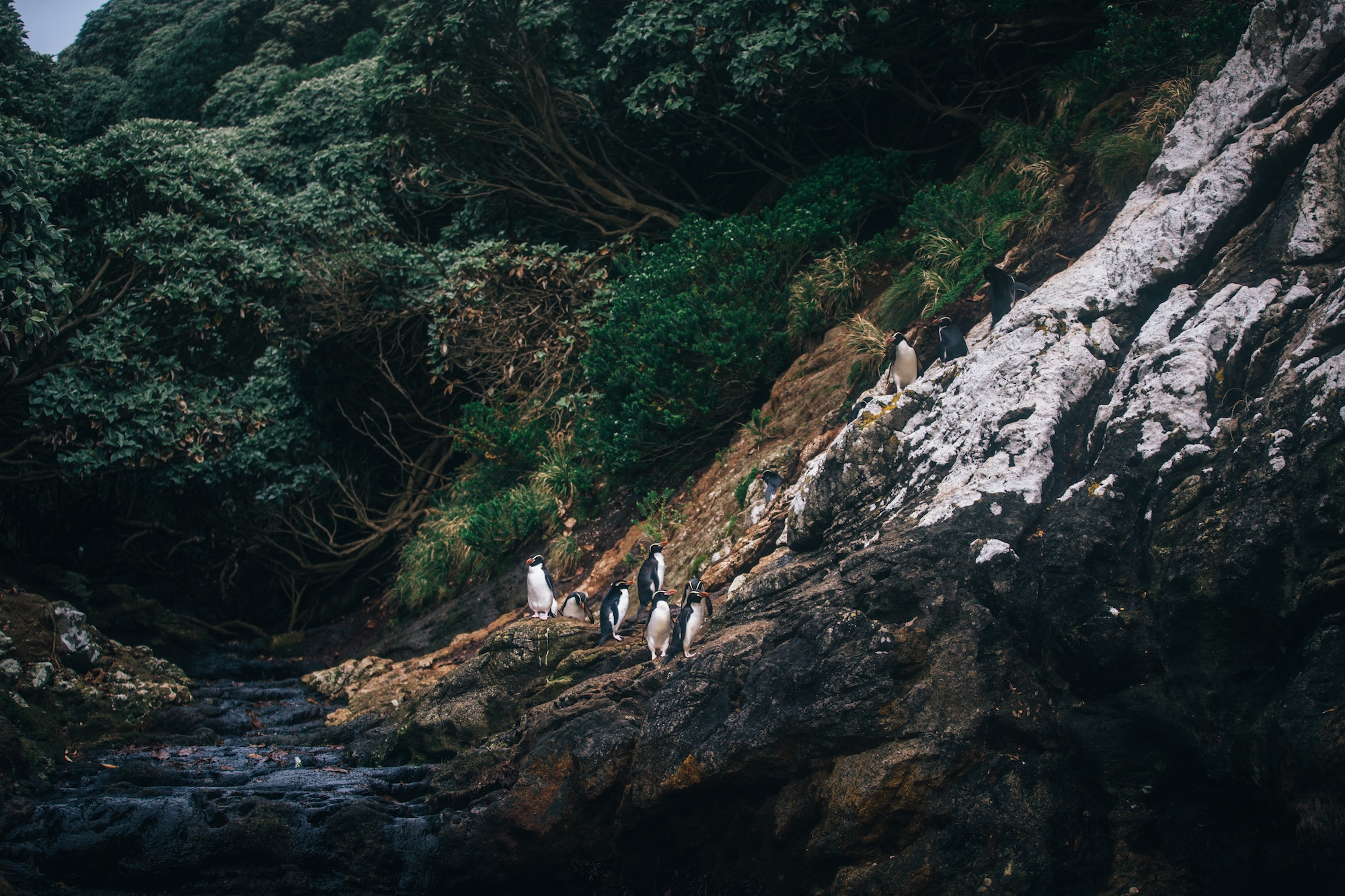 Many thanks to Heritage Expeditions for taking me to the Subantarctic Islands – like always, I’m keeping it real – all opinions are my own – like you could expect less from me!

Written by Liz and was published on June 5, 2019 in Adventures, Antarctica, New Zealand, Subantarctic Islands

11 Comments on “A voyage to the Snares Islands” 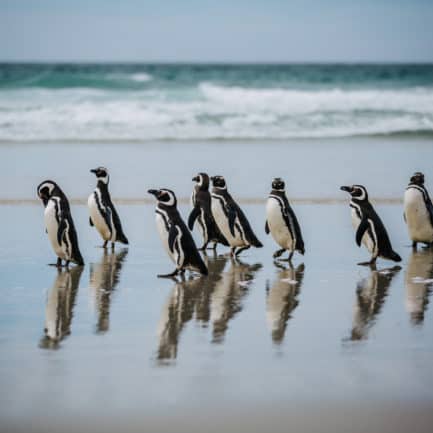 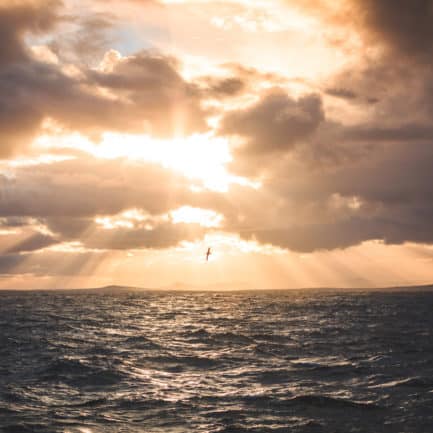