Home » Blog » Get Inspired » Moving Giants: the story of translocating 200 elephants across Africa

This is the story of what happens when you have lost all of your elephants in one country, while another country has too many. In honor of World Elephant Day, I might go ahead and share one of my favorite stories of saving these delightful creatures – Moving Giants.

Yes, you read that right—too many elephants. Perhaps you’re like me and just assumed that all elephants were facing extinction, especially from poaching. Until I began reading more and working more in conservation, I learned that that’s not always the case.

Sometimes it’s common for wildlife that is being brought back from the brink to become “too abundant.” That’s right. There is a generation of elephants at the southern tip of Africa, which are experiencing a very “humanized” problem.

There are just too many elephants.

12 surprising things I learned while in Botswana 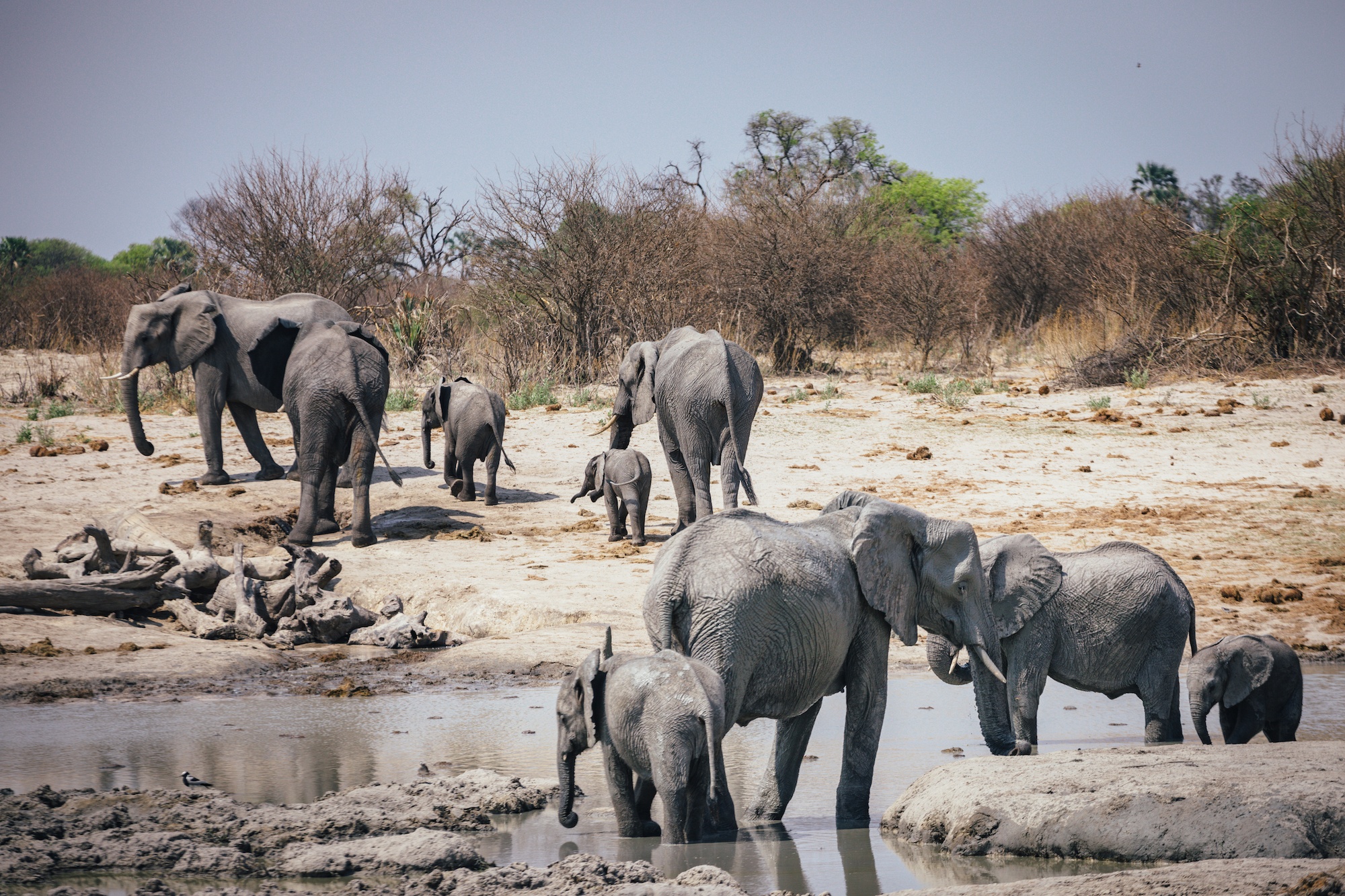 South Africa: what happens when you have too many elephants?

The Venetia Limpopo Nature Reserve (VLNR ) rests on the border of South Africa, and Zimbabwe is vast and enormous. It was established in the early 1990s, home to some incredible and diverse wildlife. From hundreds of species of birds to ancient baobab trees, and lush riverine forests, it’s incredible. Part of the De Beers Group Diamond Route*, the VLNR is home to these thriving ecosystems, where its fertile lands and safe conditions created a unique challenge – too many elephants crowding the landscape.

Must have been all those romantic African sunsets.

Jokes aside, you can have too much of a good thing. Too many elephants in a “small” area can wreak havoc on the delicate ecosystems that are also recovering and flourishing too. As a result, other species are suffering. Let’s not forget to mention the poor dry earth itself. Resources are running thin, and there are lots of mouths to feed. Sound familiar?

*The Diamond Route is a collection of biodiversity conservation sites and nature reserves, owned and managed by De Beers Group and Debswana, that span 200,000 hectares across southern Africa. 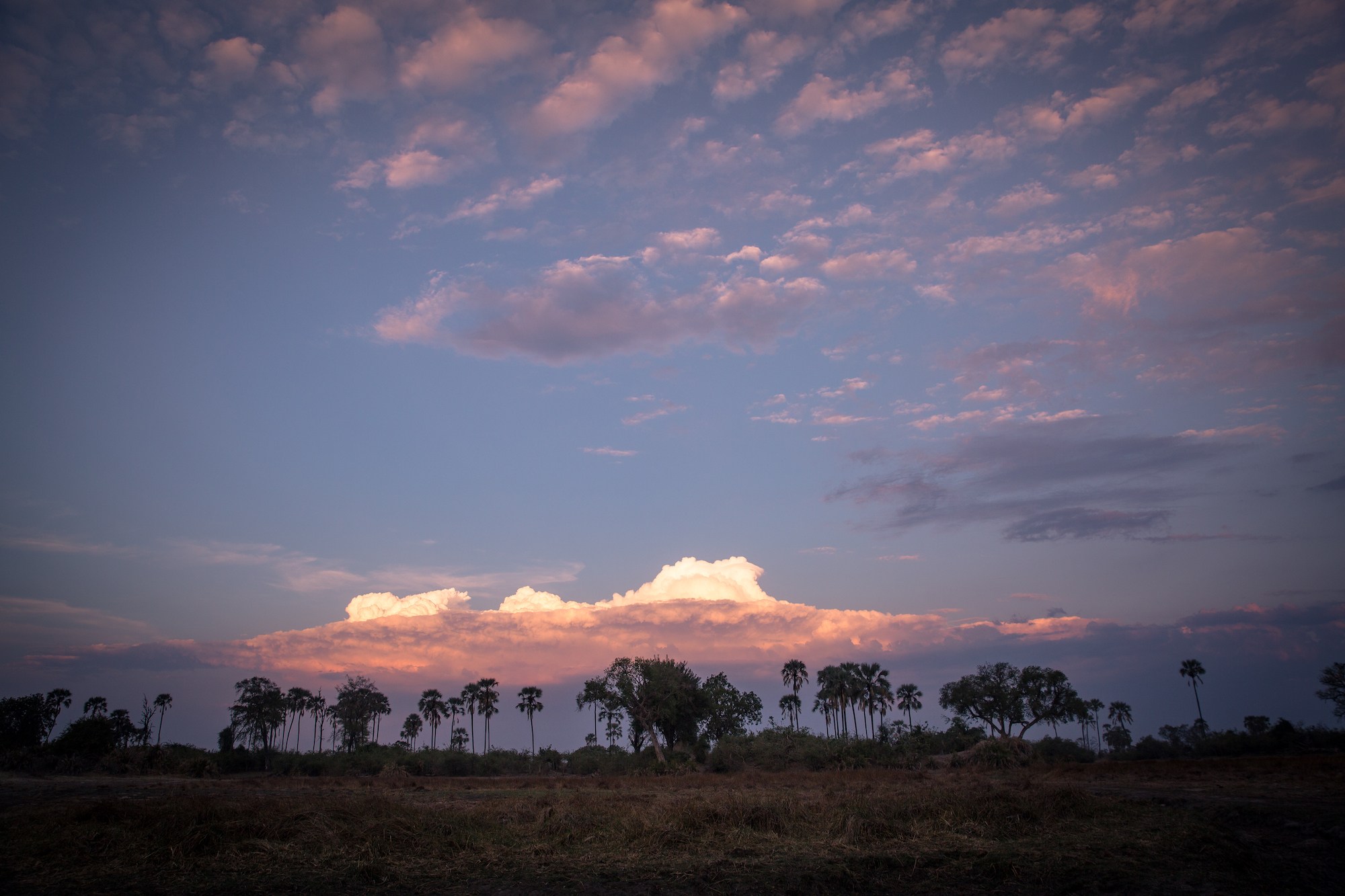 Mozambique: when you’re trying to bring back the elephants

Meanwhile, nearly 2,000 kilometers away in Mozambique, the elephant population is struggling big time.

From 1977 to 1992, the country suffered a brutal civil war. More than a million people lost their lives. Almost all the elephants were killed as well. Without this keystone species, the ecosystem of the national parks there hasn’t been in balance since.

There are just too few elephants in Mozambique, a place desperate to revive its native elephant population.

Do you see where I’m going with this? 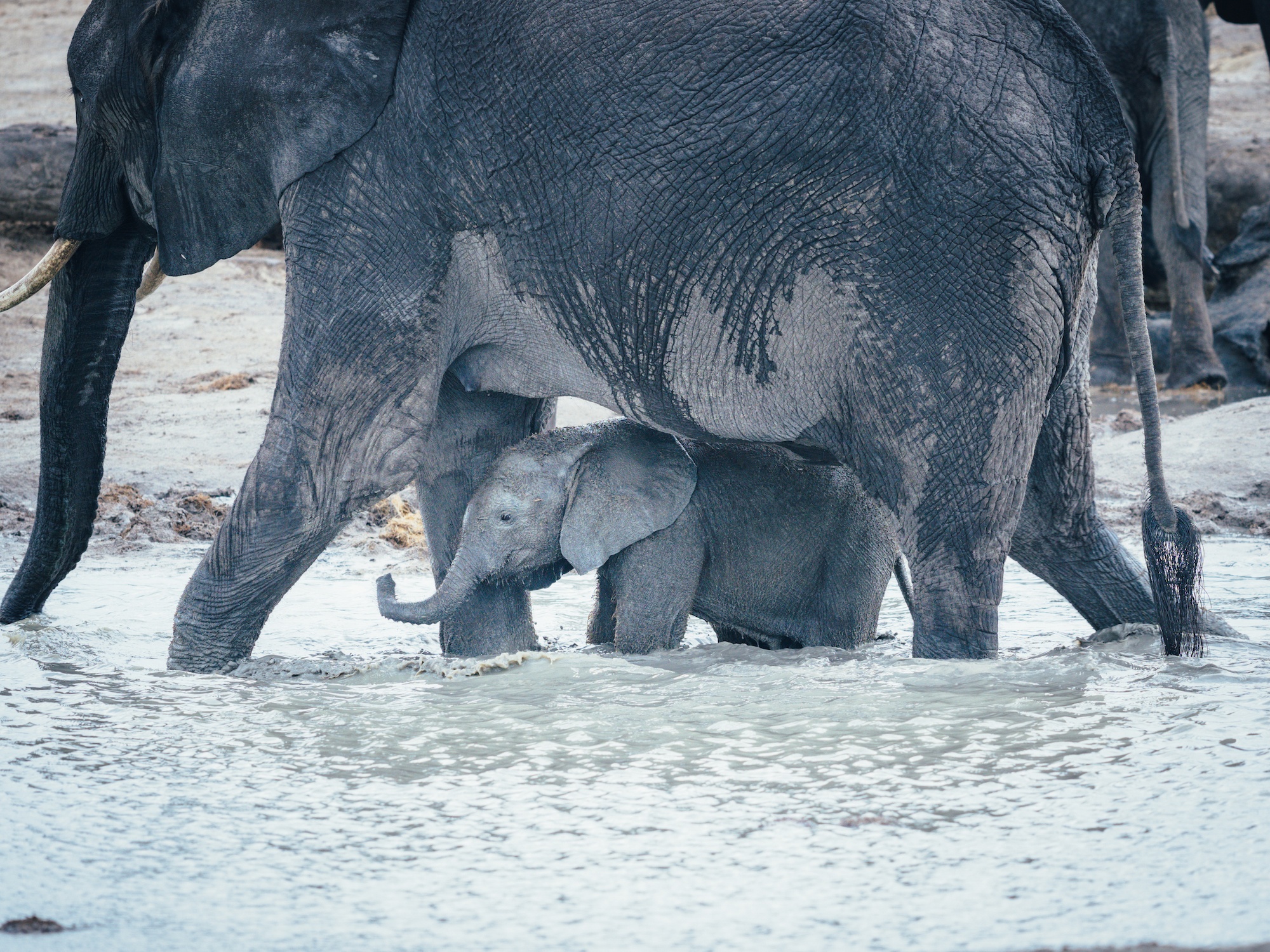 De Beers Group’s VLNR in South Africa has an overpopulation of elephants. In contrast, Zinave National Park in Mozambique lost much of its wildlife as a result of civil war in the ’80s.

So what if excess elephants from SA, could be rehomed in Mozambique?

Could this happen? Is this possible? How on earth do you move some of the biggest (and heftiest) creatures on earth, which I’m guessing, really don’t want to be moved. A complex problem requires a complex solution, and we all know those don’t come cheap.

Luckily De Beers Group was up for the challenge and has invested millions in funding anti-poaching efforts and translocating the elephants from the VLNR to Zinave in collaboration with Peace Parks Foundation and Moving Giants.

The UN has asked for the private sector to help support the planet, and De Beers Group answered. By also providing funding for the ongoing training and employment of experts to protect translocated elephants, they are putting their money where their mouth is when it comes to looking after our environments. It’s a shining example of a company making a real difference. 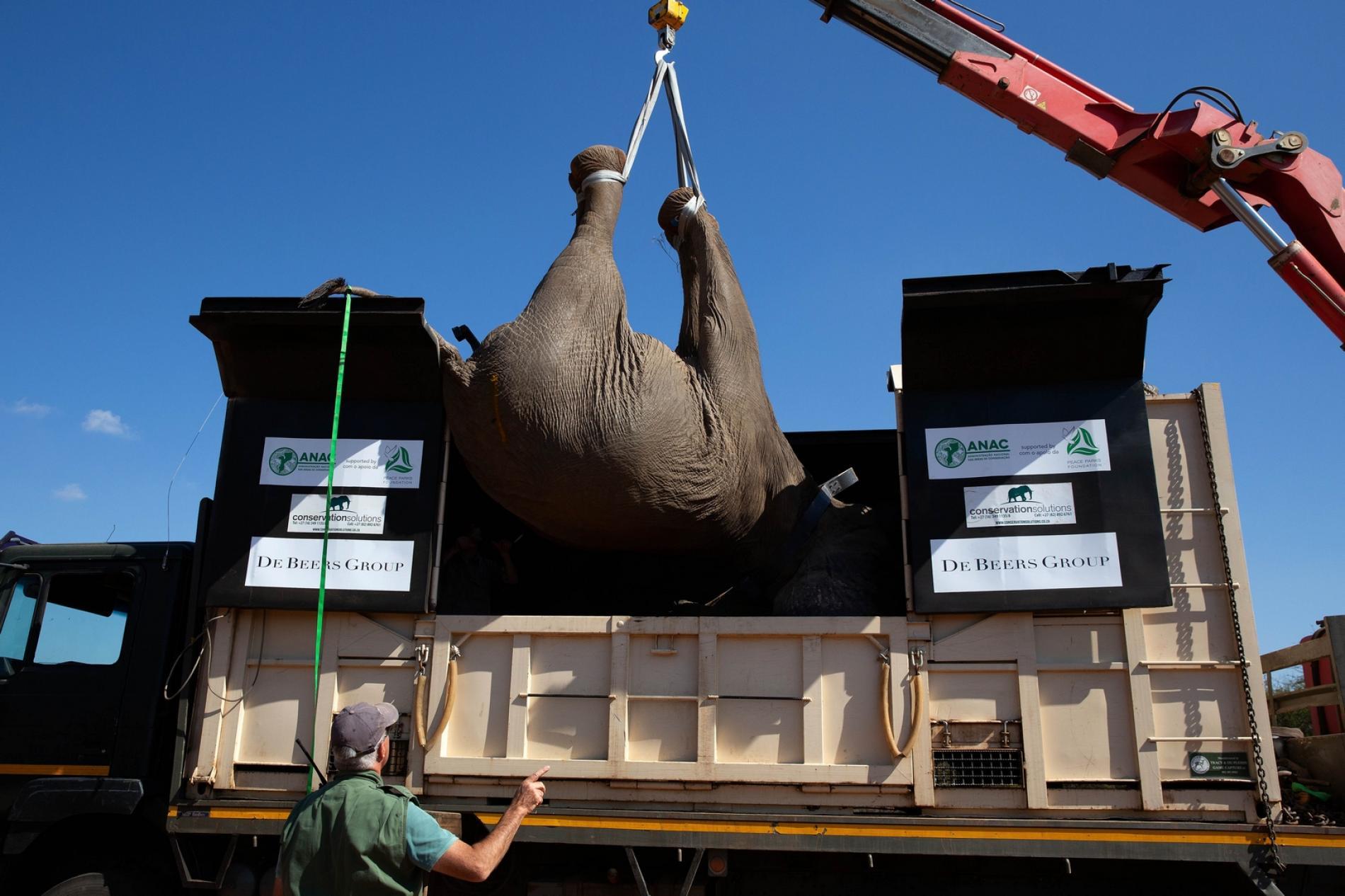 What is so important about elephants? Why do we need to move these giants?

Good question. Elephants play a massive role in trampling flourishing grasslands. This is good because it makes room for other species even to exist. Additionally, they dig dry riverbeds with their tusks when rainfall is low, creating waterholes for everyone. The little dudes of the nature reserves need these massive plodders just like us humans need plants.

Need I mention they also disperse seeds in their poop. They carry it miles before depositing and generating new green growth? The impact of elephants is far-reaching and vast.

Now, thanks to De Beers and Peace Parks Foundation, a particular, daring, exciting project is underway: the longest elephant translocation ever attempted. 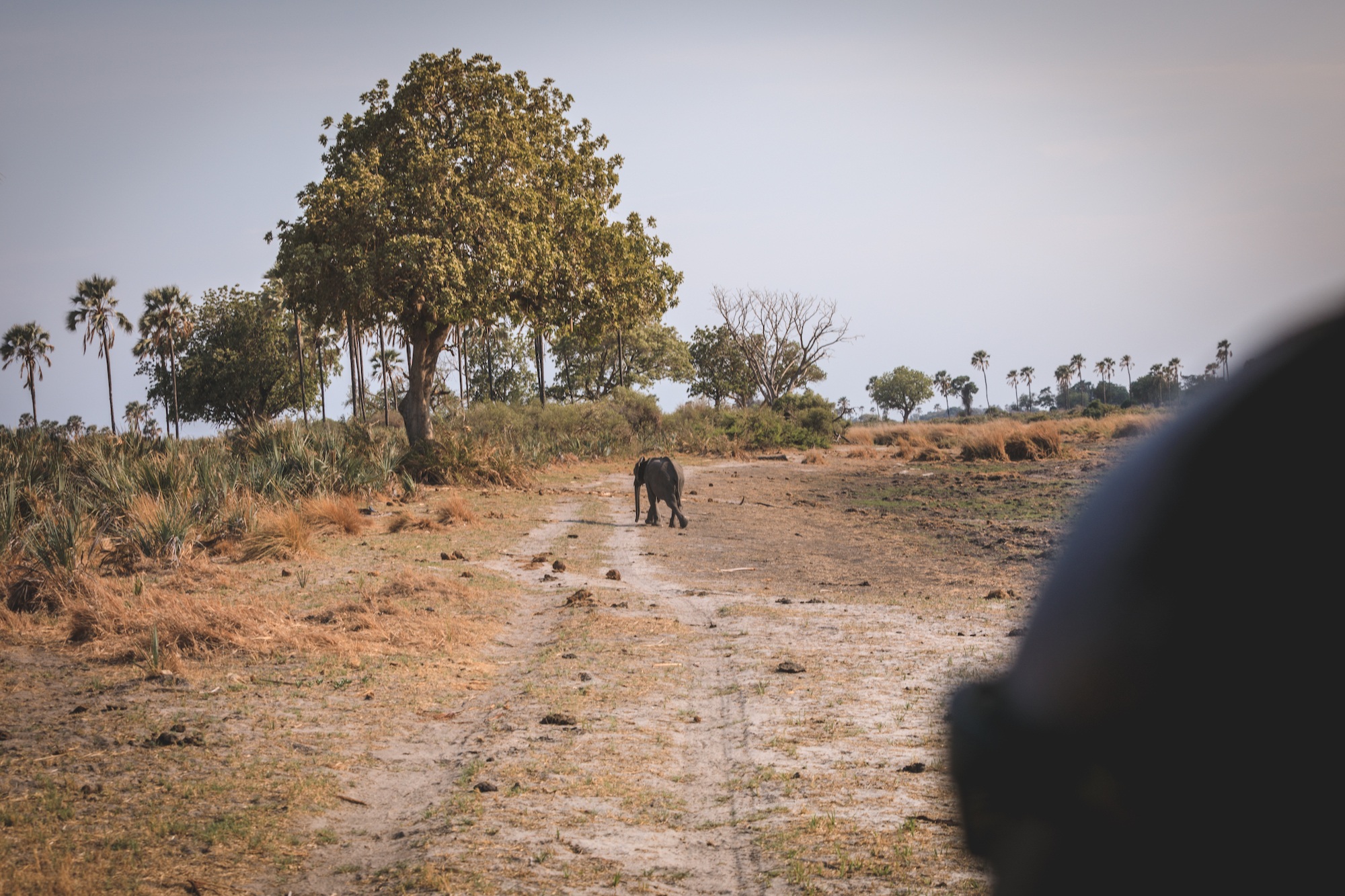 This remarkable De Beers Group collaboration, Moving Giants is translocating hundreds of elephants 1,000 miles across Africa – and with great success – so far, 101 elephants have arrived at their new home, and some already have babies!

With plans to move more of these magnificent creatures once restrictions ease next year, it’s powerful to see a big company show up and make a real difference towards protecting the wildlife we cherish.

The translocations have been successful, with the elephants successfully adapting and prospering in Zinave. Since the elephants have arrived, the park has also seen a marked change. Now there are numerous ‘elephant highways’ crossing the sanctuary. This enables thicket-loving species such as nyala, kudu, and bushbuck to flourish. Even some species of birds not seen in recent years have returned. 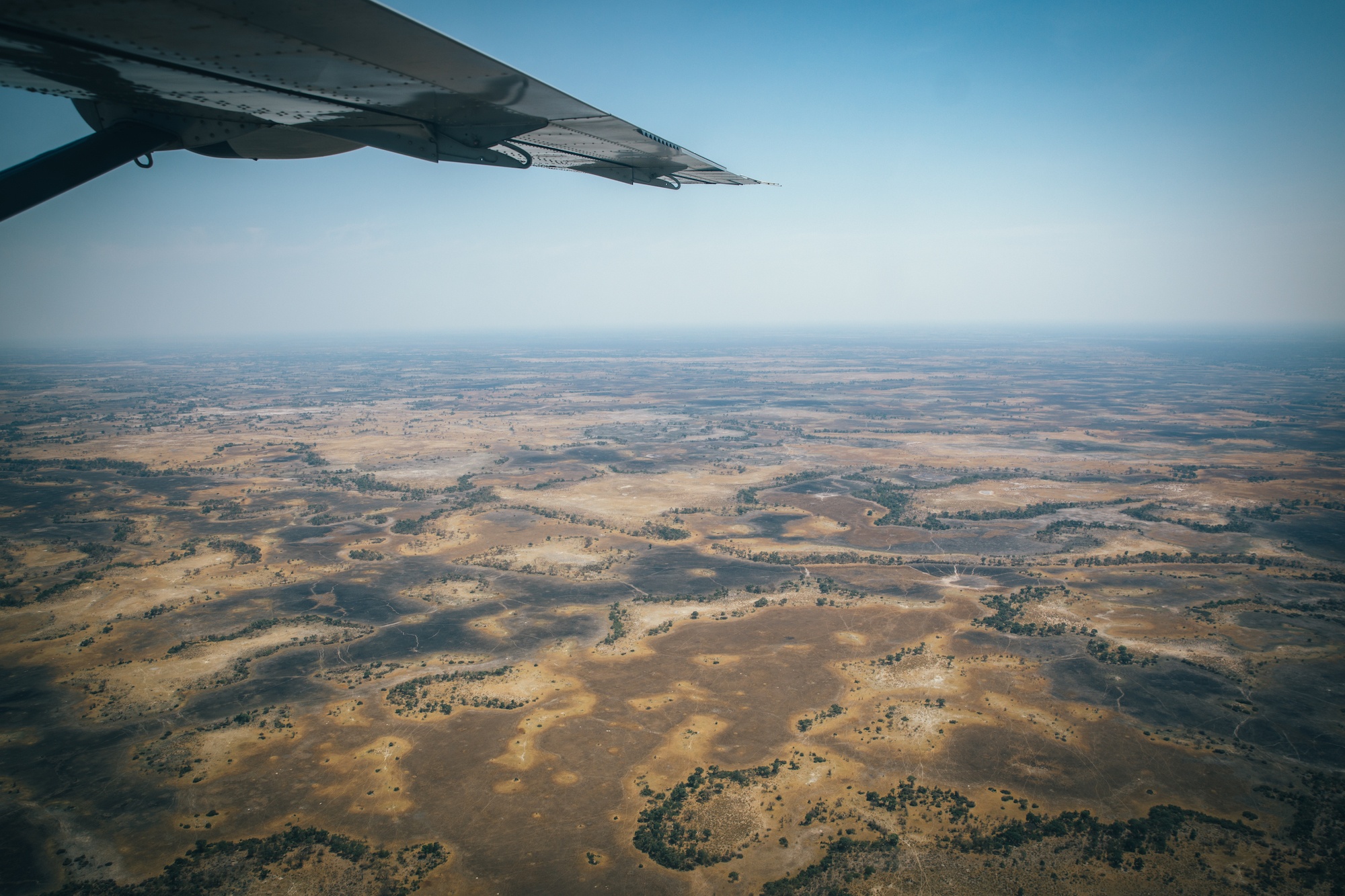 World Elephant Day was created on 12th August 2012, by Canadian Patricia Sims in collaboration with the Elephant Reintroduction Foundation of Thailand. It aims to spread awareness about the diverse threats elephants are facing as a species. Also, they share how to create a safer environment in which to nurture them.

As Patricia puts it, “World Elephant Day is a rallying call for people to support organizations that are working to stop the illegal poaching and trade of elephant ivory and other wildlife products, protect wild elephant habitat, and provide sanctuaries and alternative habitats for domestic elephants to live freely.”

World Elephant Day is all about having the conversation and learning and growing. Look at what Moving Giants has achieved! Anything is possible. It’s also a good time to mention this too. The only way we should interact with elephants is from a safe and respectable distance while viewing them in the wild. 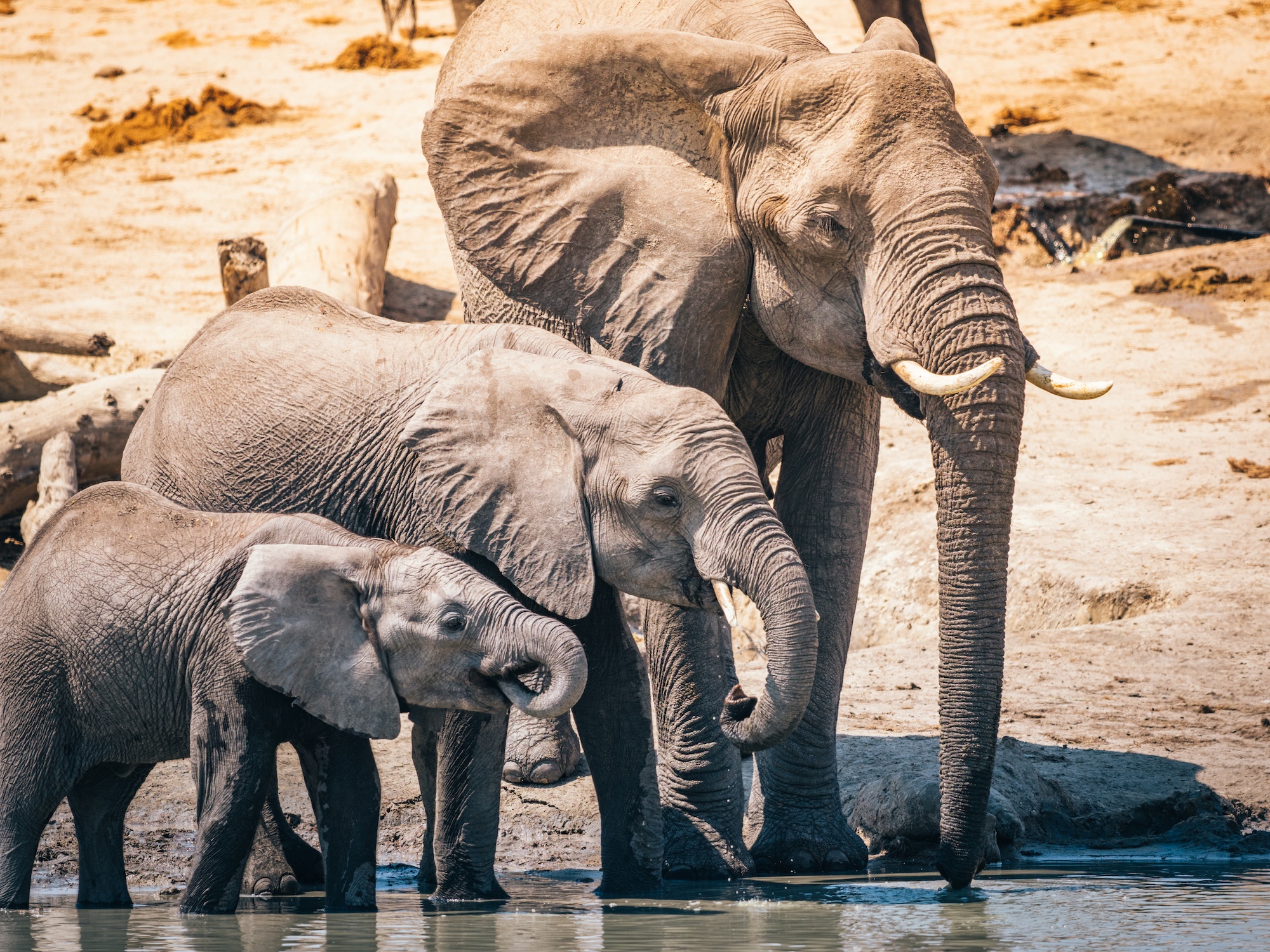 Recently, The Elephant Reintroduction Foundation has found that formerly captive elephants released back into the wild have successfully mated with each other. Now they roam free, protected from *cringe* tourism schemes. While riding an elephant in Thailand seems like a classic bucket list thing to do, there are far better ways you can interact and support elephants.

Be a responsible tourist and look for conservation parks that have legitimate interests. If the company’s primary interest is in taking your money, you can assume they aren’t treating the elephants well.

As the world comes to grip with the new normal, my mind can’t help but drift towards the animal kingdom. I worry about what will happen to the endangered wildlife initiatives I support.

Between the drop in tourism and government funding and private philanthropic efforts diverted towards healthcare, who is left looking after our most threatened creatures on the planet? It’s never been more critical not to lose sight of the conservation milestones we have achieved. 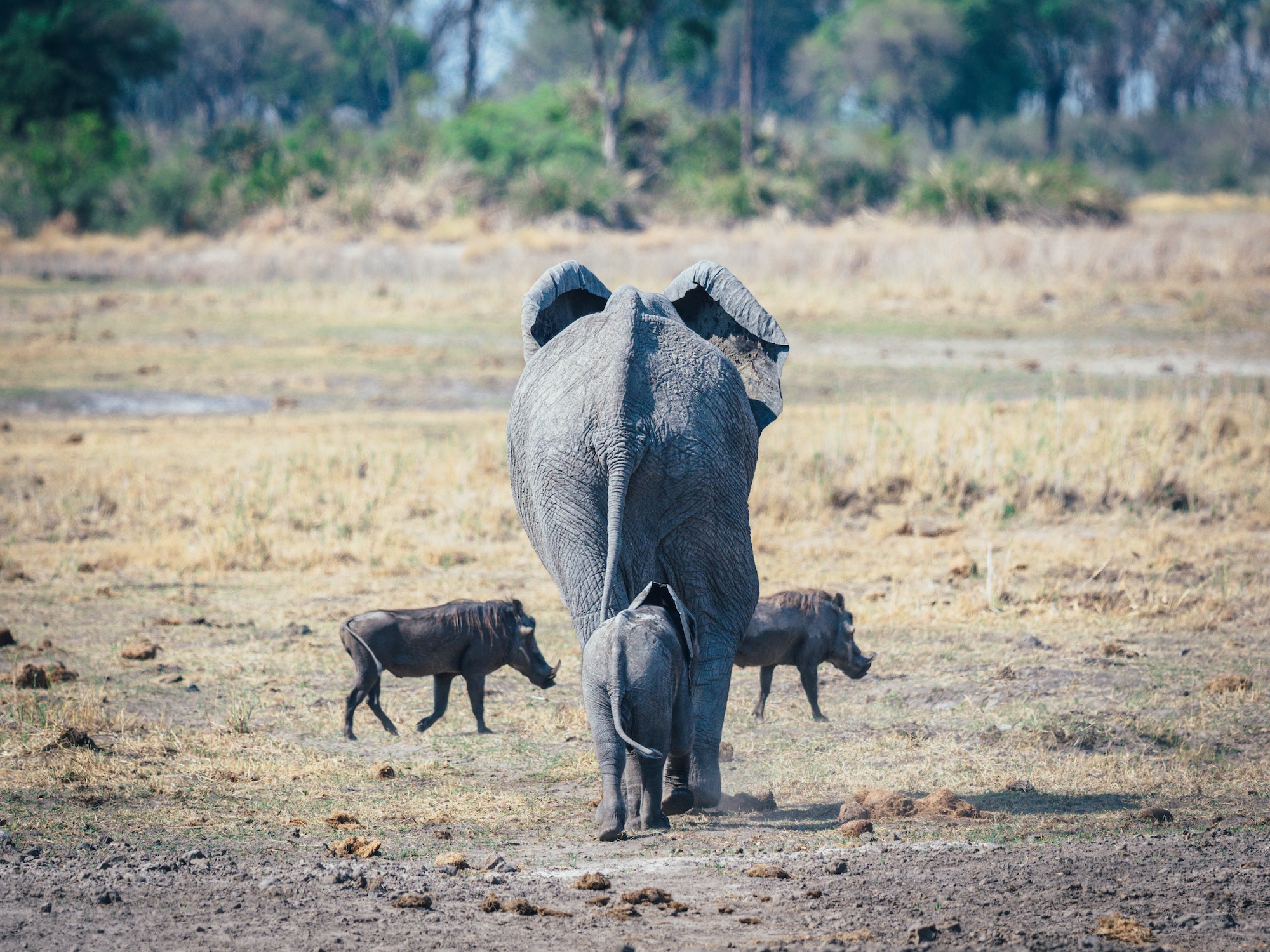 I was stoked to recently hear from De Beers Group that they’re continuing to commit to their conservation work in Africa, including through the Moving Giants initiative, my favorite of their Building Forever efforts.

De Beers Group and I share the core belief of protecting the natural world we’ve benefited from – to recover nature’s treasure, we have to treasure nature.

Who could have ever guessed that the natural diamonds buried deep beneath the red earth elephants tread on, would help save them?

What do you think of the Moving Giants project? Have you seen an elephant in the wild before? How do you think companies can work to protect the natural world? 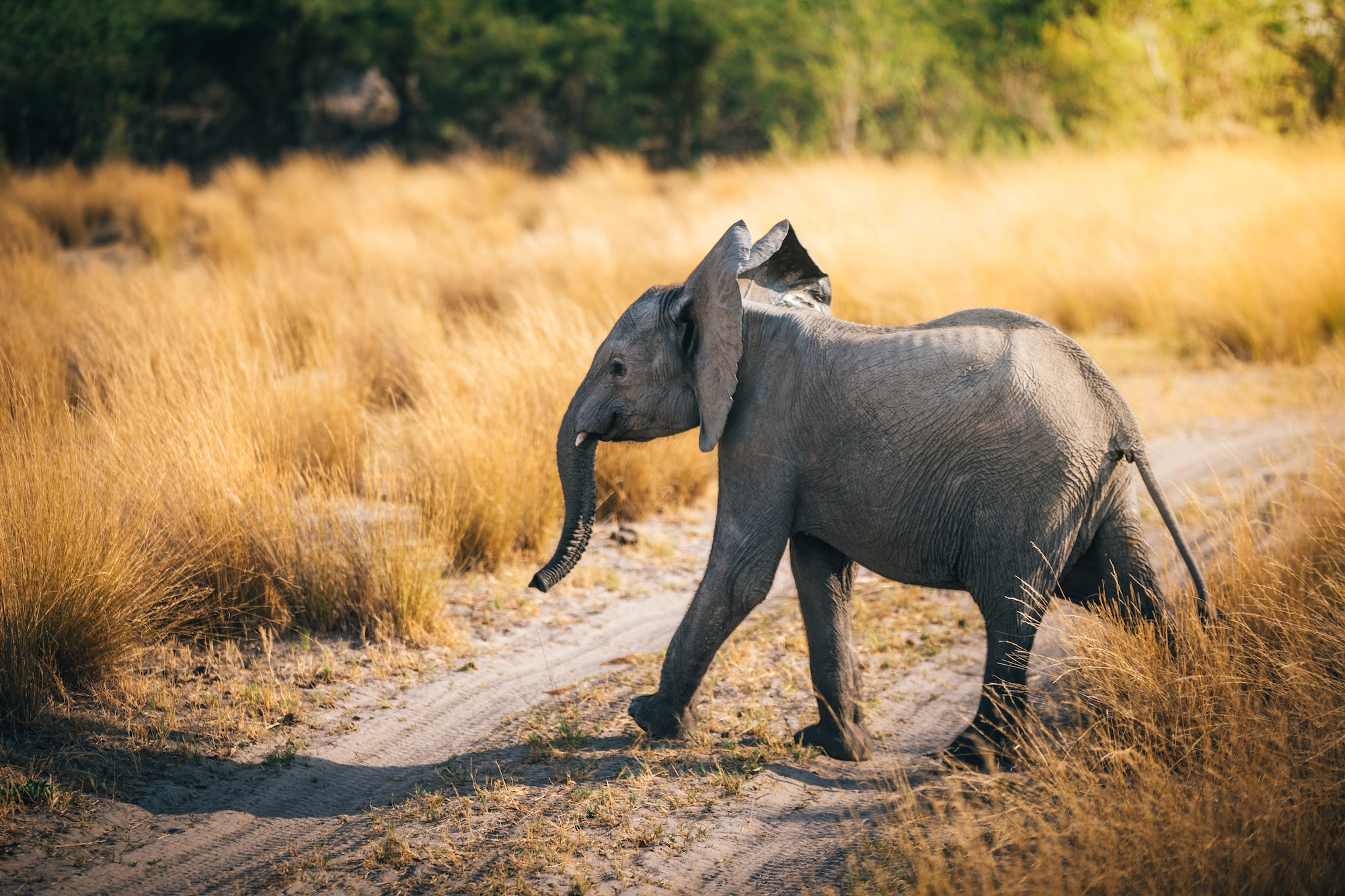 Written by Liz and was published on August 12, 2020 in Africa, Get Inspired, South Africa

7 Comments on “Moving Giants: the story of translocating 200 elephants across Africa” 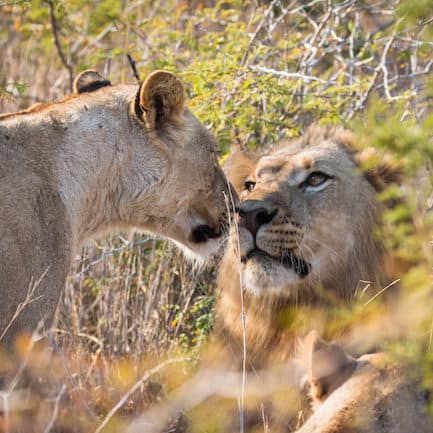 Visual overload forthcoming! I hope you guys are ready! It's been a week…Read More 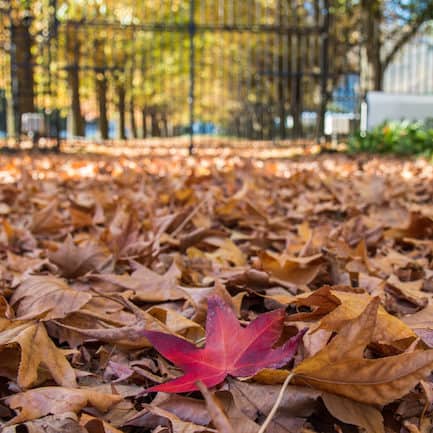 45 minutes inland from Cape Town, is a little corner of South Africa…Read More 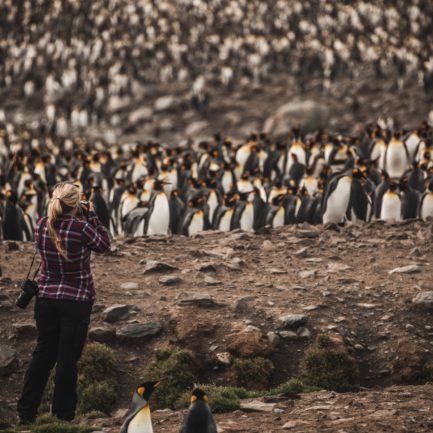 20 wildlife photos that will transport you around the world