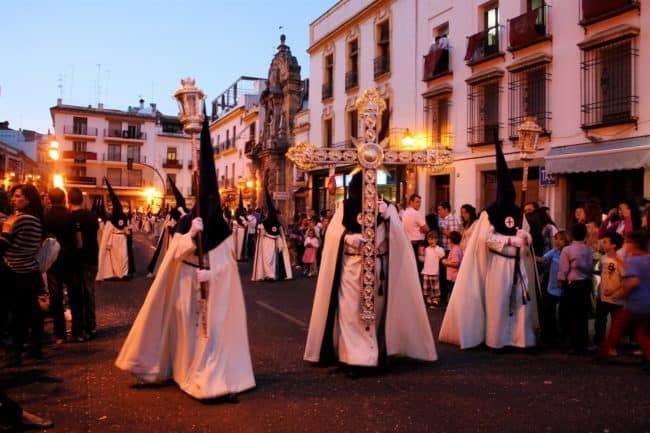 Two weeks ago was Easter in Spain. Now Easter here is rather a big deal. In fact they take a whole week to observe it. This week is called Semana Santa (Holy Week), and no where is it better celebrated than here in Andalucía. Semana Santa begins on the last week of Lent, on Palm Sunday and goes through until Easter Sunday, and in Spain it’s most famous for it’s incredible religious processions or parades, particularly in Andalucía, like in Málaga and Sevilla, but they are all over the country. Let’s just say that when it comes to Catholic celebrations, Spain knows what it’s doing.

So if you’re like me and you were not raised in a country where people are named Jesús and you study Catholic religion in public schools, and when you hear “Easter” you think gift baskets with chocolate bunnies and pastel dyed eggs, than let me just say, Semana Santa is like a whole other holiday. In fact when in my school we painted Easter eggs and colored drawings of the Easter bunny, and all of the teachers were like, “How weird! Why are there eggs?!” I’m not gonna lie, I had to google all of the days leading up to Easter to know what happened on them!

Until this year I had never actually seen a Semana Santa celebration in Spain. When I was in Salamanca, we had over two weeks off from classes so I backpacked around Holland, Belgium, Poland, and Italy. So this time, I was sticking around, especially because my favorite professor from college was visiting Córdoba. So on the Sunday before Easter, I was in my room when I heard the tell-tale drums and could smell incense through my window announcing that Semana Santa was here! I grabbed my camera and ran outside to see tons of people gathered on my narrow street, with the first procession coming my way. I was really lucky (or unlucky, depending on how you look at it), that almost all of the processions go down my street. Now there are around 5 processions a day in Córdoba that last for around 6 hours each, each one run by its own religious brotherhood (cofradía) each with its own name, like “Paz,” “Amor” or “Esperanza.” Most of them start in the afternoon around 5, and they go on until 3 in the morning! Before Semana Santa begins you must find a little booklet that has the schedule and routes of all the processions for the week. You can usually find them in the local shops and bars.

Now something shocking for the Americans, the penitents (nazarenos) that walk in the processions are dressed in long robes and a tall pointy hood that covers their face, exactly like the KKK. But no fear, the nazarenos have been dressing like that centuries before them. They generally carry a tall candle or large cross, and sometimes you will see some who go barefoot or even with chains around their ankles. Talk about extreme penitence! The nazarenos are members of the brotherhood, and are men, women, and even children. 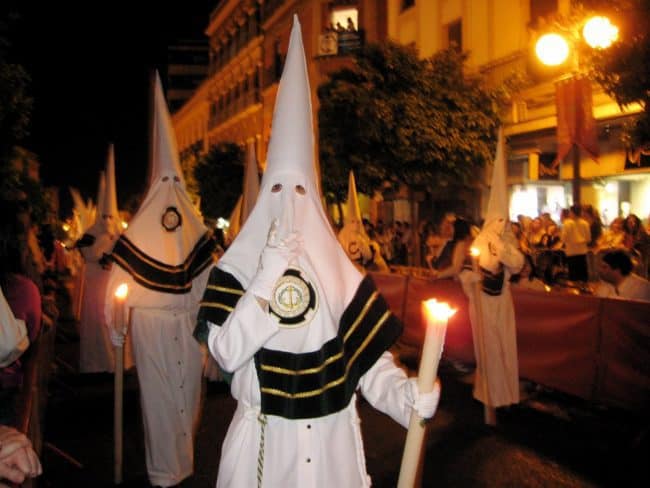 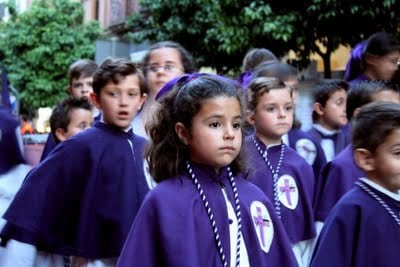 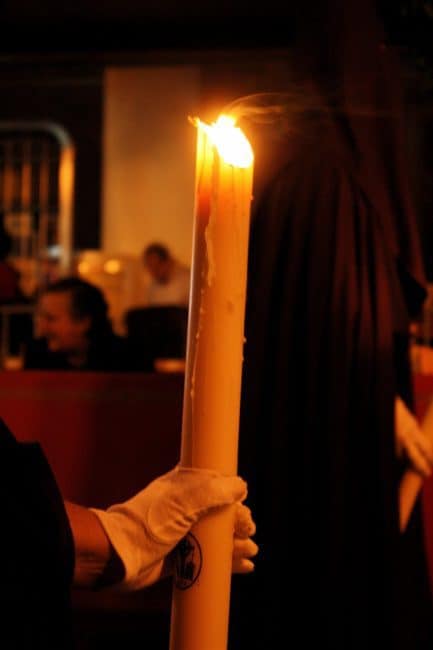 In addition to the nazarenos, you have huge platforms or floats (pasos) covered in flowers and candles depicting a holy image. There are usually two in a procession: the first depicting scenes from the days leading up to the crucifixion and then the second is of the Virgin, crowned and covered in a canopy with about a hundred tall candles in front of her. It is truly an incredible sight!These enormous platforms weigh about a ton and are carried on the necks of big, burly men (costaleros); you can recognize them by the padded cloth head scarf they wear to rest the paso on. However I did see one procession where the costaleros were women-right on! In Córdoba the costaleros are underneath the paso, mostly because the streets are so narrow to carry them on the outside. Some of the pasos that I saw were huge, I mean huge! Everyone had to shove up against the walls to let it go by. Every so often they will stop and rest; the paso has legs like a table so it can rest on the ground. Sometimes you will see the costaleros dance underneath the paso to the music, moving it in sync, or walking backwards, but the best part is before they start walking again, they will jump with the paso! Everyone shouts bravo, olé and good job to them! Here is a video. 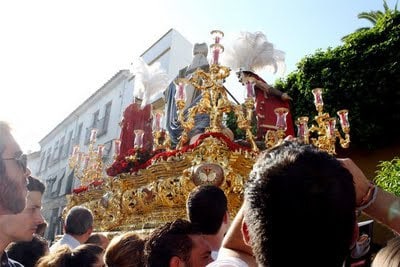 Paso in the Esperanza procession 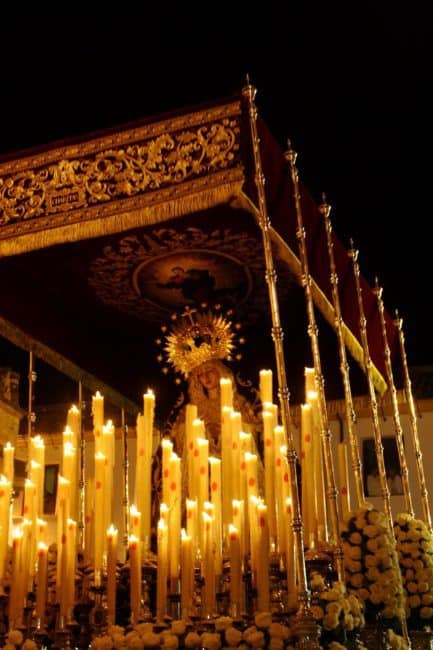 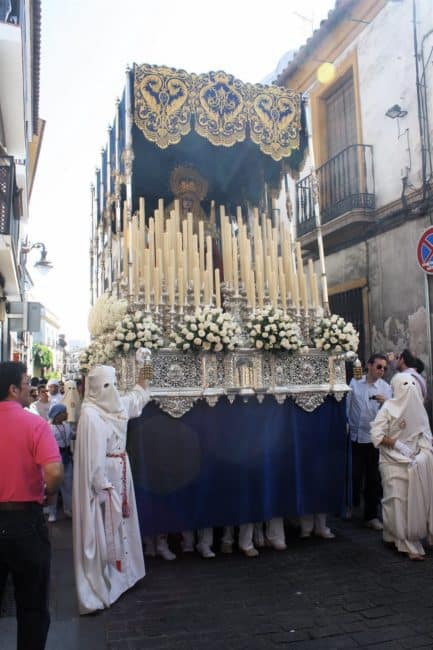 First procession of Semana Santa 2011 in Córdoba, see the costaleros feet?! This was also right outside my apartment building 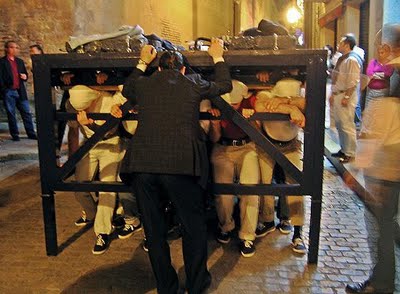 Most people try to see the procession as it leaves and enters the church, especially because the pasos are so huge they look like they won’t fit through the door! People will wait for hours to get the best view. In front of the pasos there are boys who carry the ornaments of the church, dressed as acolytes, and some swing huge incense containers, called botafumeiros, filling the whole street with smoke. Behind the pasos you usually will see a group of ladies all dressed in black, carrying rosaries, with a large comb in their hair draped with black lace over the shoulders (mantilla). This is the traditional dress of devotion worn by women on special occasions in Spain. Honestly, I think these poor women suffer more than the barefoot penitents with those heels! Behind them you will see a group of regular penitents, dressed in normal clothes walking in the procession. Within most processions there are also several marching bands playing. 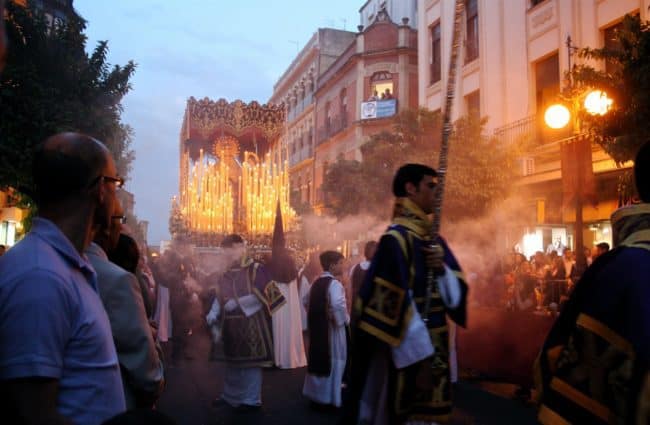 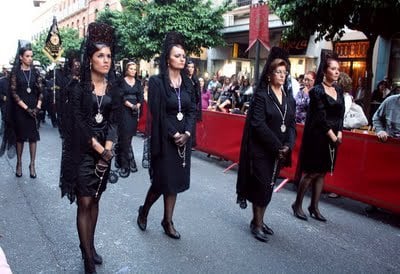 Traditional devotional dress with the mantillas

Each procession is different, from the style and color of the robes of the nazarenos, to the color of the candles they carry, to the pasos carried by the costaleros, to the size of the procession- I saw one that had over 700 nazarenos! There is even a difference to whether or not it’s a quiet, solemn procession, to a noisy loud one. One of the last processions I saw on Monday night around 1am, and it was a very serious one. Police passed ahead of it making every one stand aside and be quiet. All the nazarenos were dressed in black. They carried lanterns, candles, and crosses and were chanting Ave Marias. There was no music and the crowd was absolutely silent, listening to them; the nazarenos at the back of the procession were singing; click here for a video. This was the solemn affair that I was expecting. 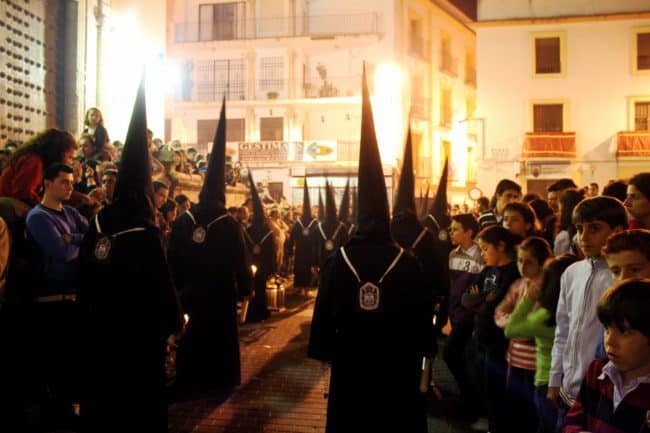 However, this was not the typical procession in Córdoba. I was actually really shocked to find out that Semana Santa here is kinda like a week long party. Everyone goes out and watches the processions with family and friends; the ground is literally covered with sunflower seeds and beer cans. The processions are not the super organized affairs that you expect in the States: there are hardly any barricades or police. People walk in and around the nazarenos and the floats, talk with the nazarenos. The parents of the younger nazarenos with usually walk with them and give them water or snacks if they need it. The really little kids carry baskets of candy to hand out to the kids in the crowd. The fad for the kids here to is to have a ball of wax and go up to the nazarenos when they are stopped and ask them to pour some of the wax from their candle onto their ball; it’s like a big competition! The costaleros who are taking a break will have a cigarette. Everyone talks and hangs out, and then when the Virgin goes by, they’ll put their beer can on the ground and cross themselves. It’s too funny. This contradiction is one of my favorite things about Spain. If you ever come to Spain for a holiday, Semana Santa is definitely one of the best times to come, and to see it in Córdoba is worth it; it has a smaller, local feel here, as opposed to Sevilla, Málaga, or Granada, which is jam-packed with people, with just as many huge processions. I was really lucky this year because I got to spend it with my favorite professor, who is from Córdoba, and her awesome family. Semana Santa is for sure one of my favorite things about Spain. 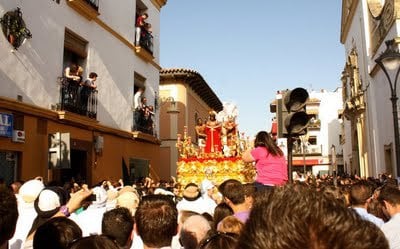 Watching the huge procession leave San Andrés near my apartment. This crowd was huge! 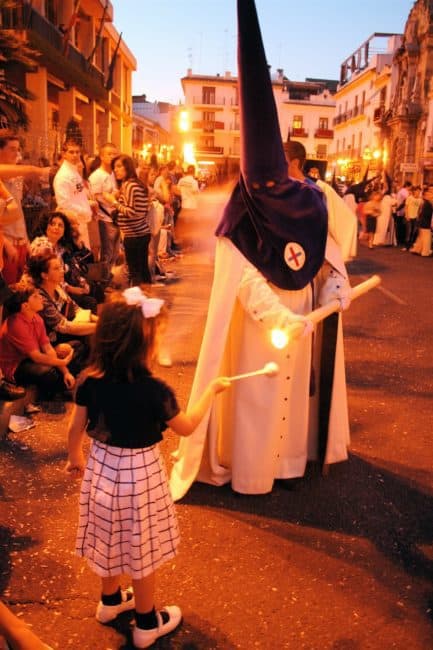 Kid asking for wax from the nazarenos 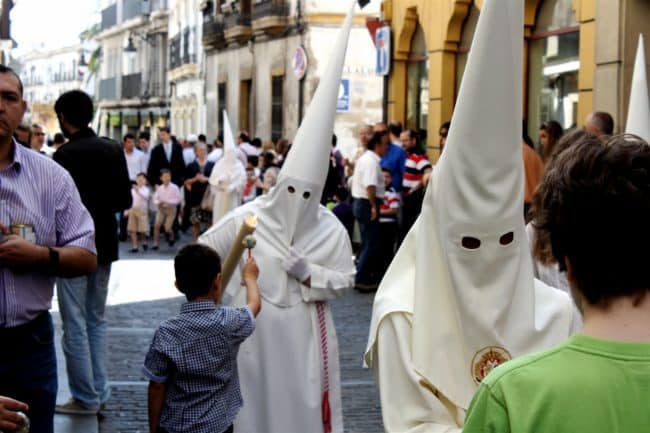 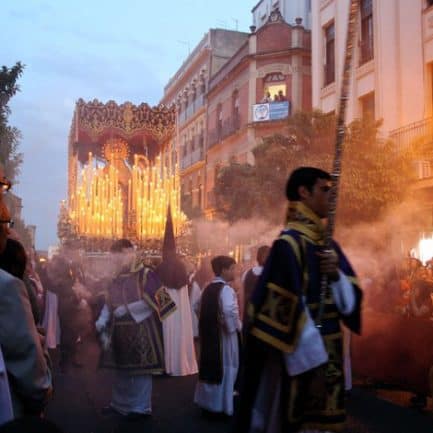 Santiago de Compostela, where St. James is buried and one of the biggest…Read More

Guess who is living in the 2012 Gastronomic Capital of Spain? (capital española…Read More
More travel stories