The lights dimmed over a crowd of several thousand people, all packed in like sardines at Logroño’s sports stadium. It was so hot and I was sweating right though my red soccer jersey with a giant flag of Spain tied around my neck like a royal cape. My friends and I nervously sipped our beers and munched on sunflower seeds, only talking about who was going to win the final of the 2012 Eurocup: Spain or Italy. All around us people were dancing along to the DJ’s music, cheering and trying to get pumped up for the final Spanish football match.

We spent June religiously watching all of Spain’s matches in the Eurocup, hoping and praying they would make it to the final. For me this was a moment I had waited 4 years for, to be in Spain when they won a major soccer title. 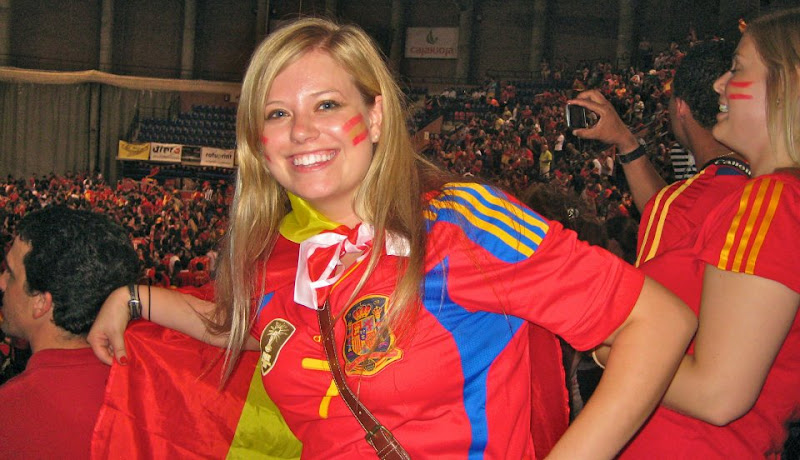 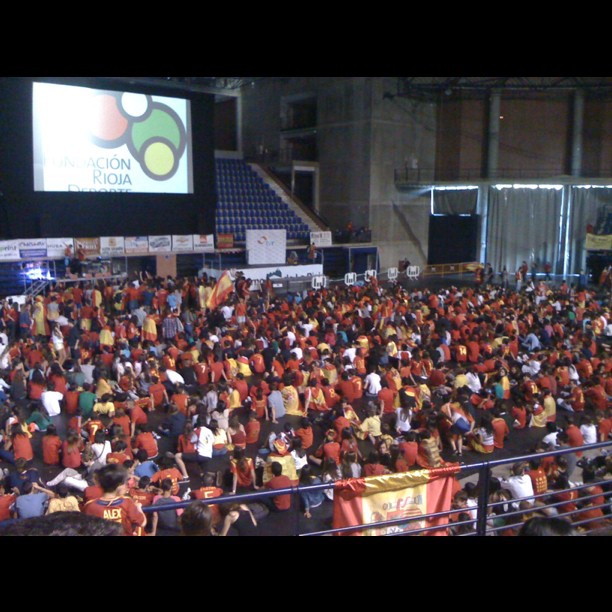 If you really want to understand Spain, really understand their burning national pride, you have to know just how much soccer means to them. Fútbol truly is a national sport here. Kids start kicking a soccer ball around as soon as they can walk, and know the ins and outs of the sport by the time they reach school.

The Spanish national soccer team nicknamed la Roja “the Reds” is the best in the world, all the players are true rockstars here. Everyone knows their names, and people even name their babies after them. There has been a huge surge in popularity of names like Iker, after Iker Casillas, the goalie for Madrid. 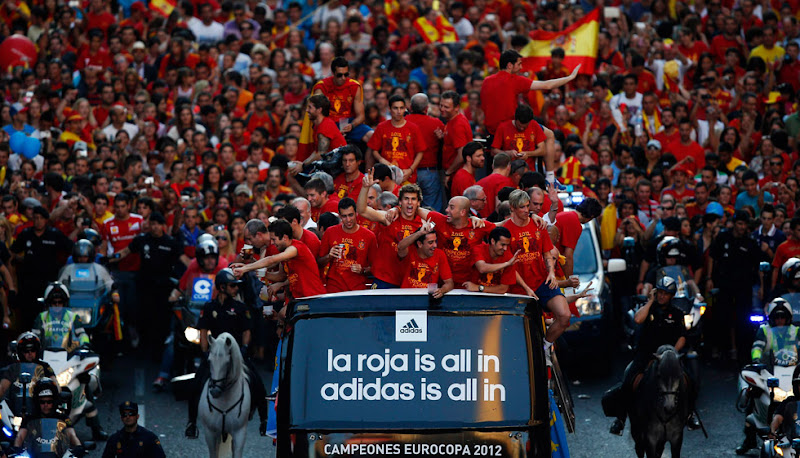 The team’s arrival in Madrid after the EuroCup win (Source) 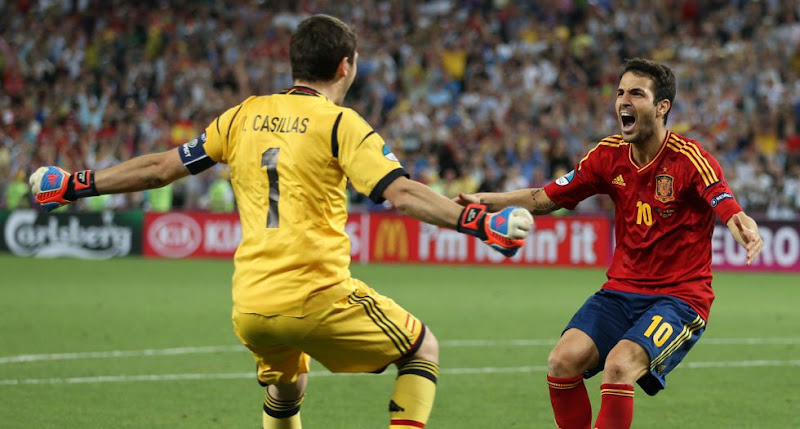 Fabregas and Casillas celebrating their win in the semis (source)

Spain’s two biggest teams are Real Madrid and Barcelona, and everyone pretty much supports one or the other, or a smaller local team. But everyone has a team and everyone has a favorite player. This is usually one of the first questions I get asked by my new students, all of whom have Barca or Madrid pencil cases, backpacks, tracksuits or all of the above. When Madrid and Barcelona play in what’s called el clásico “the classic” the bars around town are overflowing with people reaching a superbowl level of intensity. 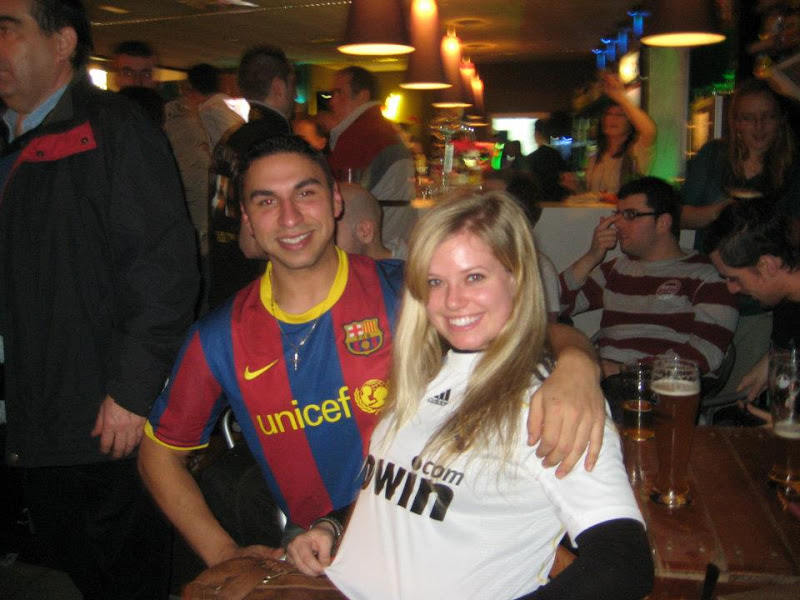 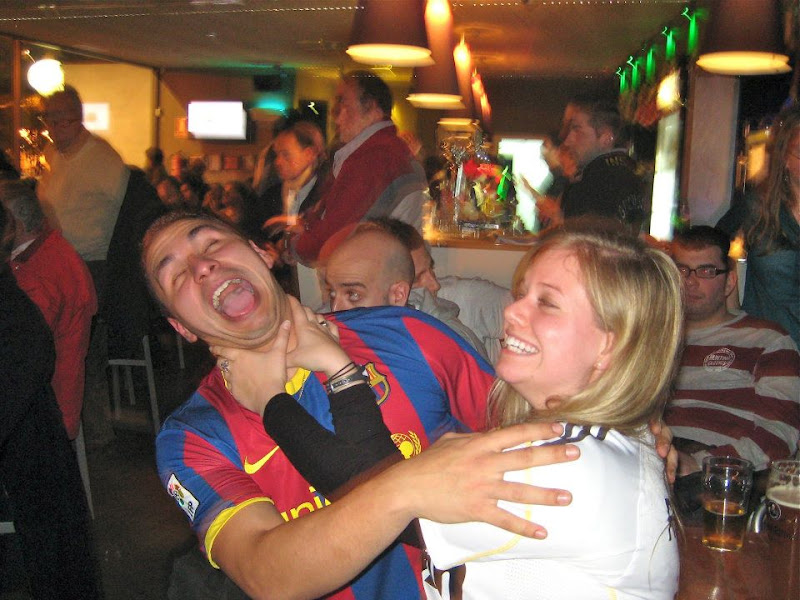 It all really got going 4 years ago when Spain won the 2008 Euro Cup. I had just left Salamanca after living there for a year, so I had to watch their epic win back home on TV. Fast forward 2 years to the summer of 2010 when I was living in western Massachusetts, working and getting ready to move to Spain in September. Spain once again triumfed and won the World Cup and I had to watch on TV in a bar in Boston. 2 times I missed actually being in Spain by only a few weeks and getting to celebrate such historic moment. 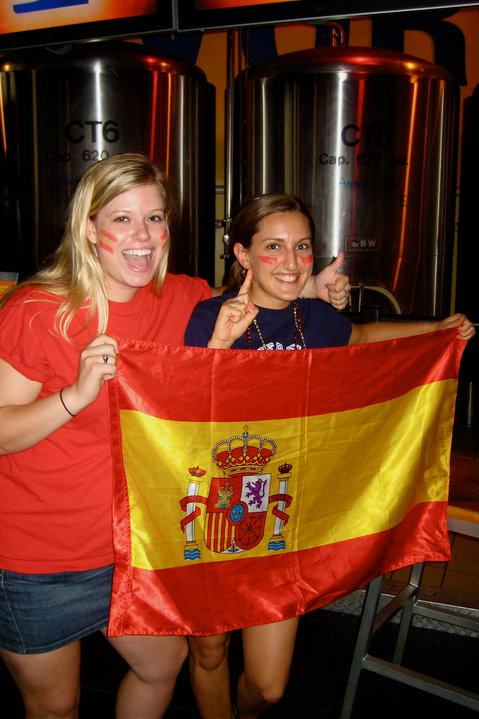 Summer of 2012 rolls around and I am actually IN Spain when the Eurocup begins. This was my chance! I had waited 4 years for this! After seeing photos of my friends over the years, I knew just how wild Spaniards got about their fútbol. There was no way in hell I was going to miss this final.

As the game began, I tried to remember not to touch my face and smear face paint everywhere. People around here are so dedicated to the Euro Cup that bags of local sweets and chips would come with a small fat stick of face paint with the stripes of the Spanish flag on it. 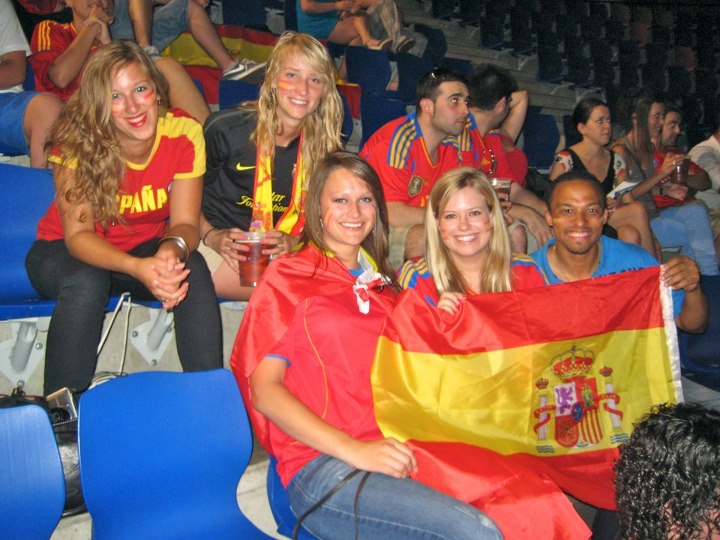 As the game wore on Spain thoroughly trounced poor Italy 4-0, and with each goal the DJ would blare the summer anthem here: “Gol: no hay dos sin tres“ by David Bisbal while the crowd would cheer uncontrollably standing on their seats waving huge flags around the air. No hay dos sin tres means there isn’t two without three, meaning Spain had better win this 3rd epic title in a row.

As the seconds scrolled by and Spain won by a landslide, it was like a bomb went off in the arena. The floor turned into a giant sea of yellow and red people, jumping around and screaming their hearts out. Grown men were crying, people were hugging, parents were throwing their kids in the air, flags and food were being thrown around, it was complete pandemonium! 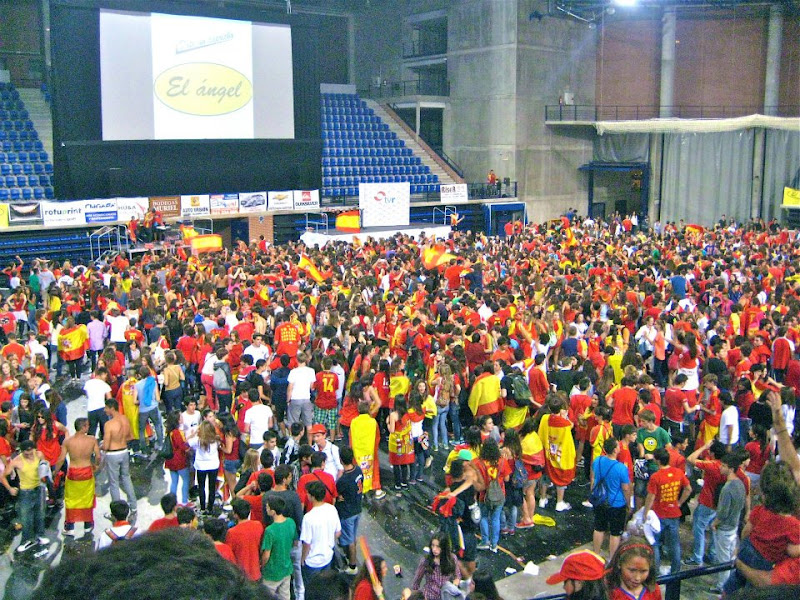 As the crowds left the stadium, everyone made their way downtown to celebrate. Traffic had come to a stop with people dancing around the streets, giant Spain flags were being flown out of car windows, with everyone exuberantly chanting “Campeones, campeones” and “Olé olé olé olé olé olé!” All of Logroño was out on the town.

As worked our way through the crowds of people, it turned into a mosh pit, people were climbing on streetlights and the main fountains were filled with people. As we were dancing around with everyone else, I realized we were getting sprayed with soap! They had set up a giant foam pit and DJ next to the big fountain in downtown Logroño. Talk about dedication to celebrating. 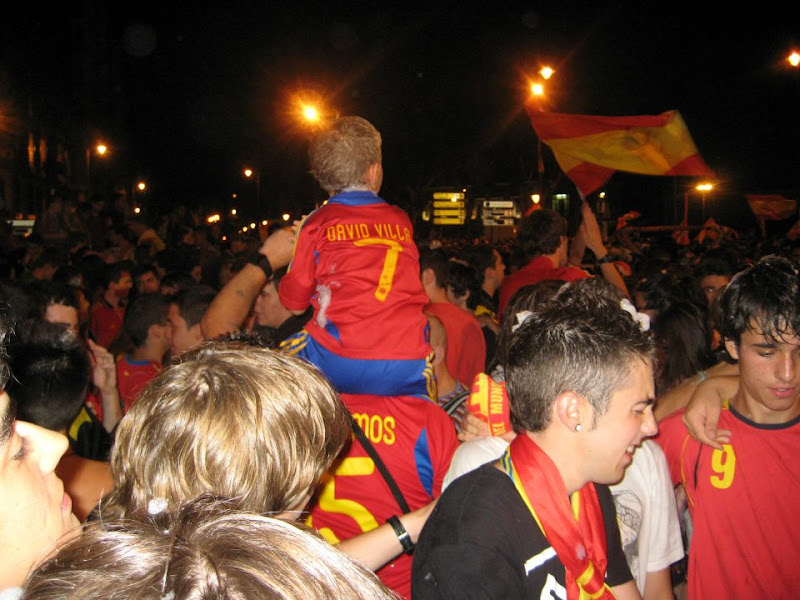 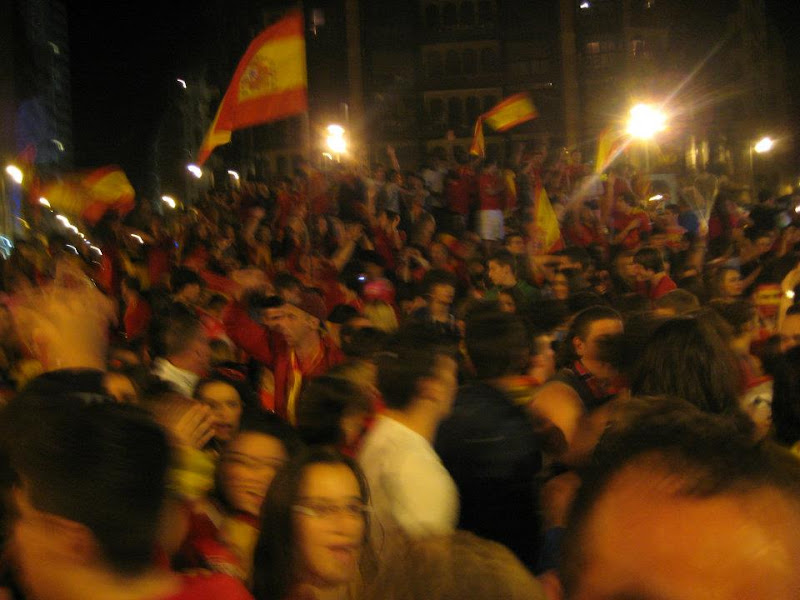 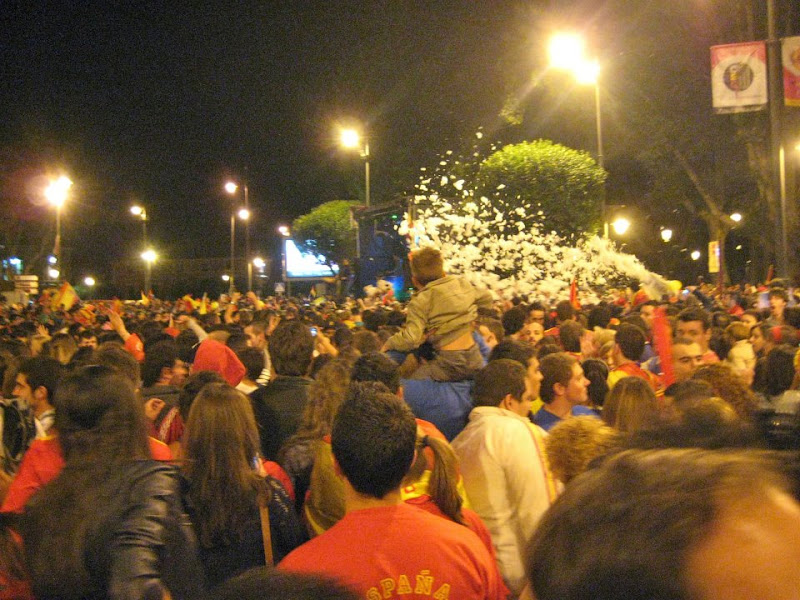 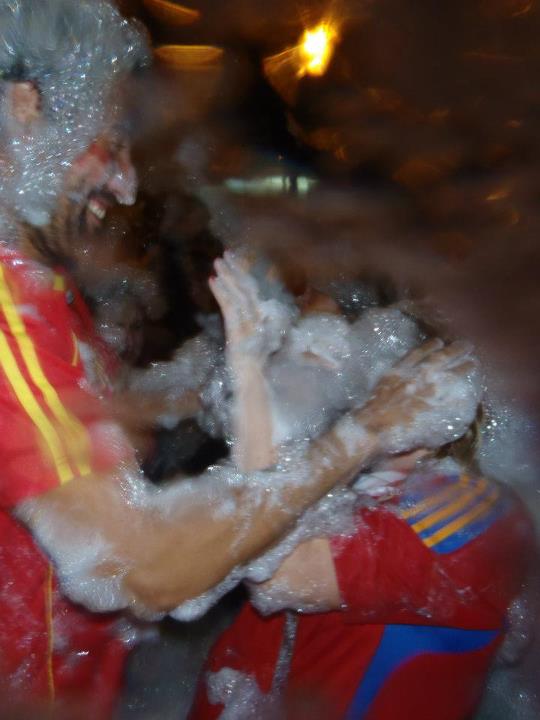 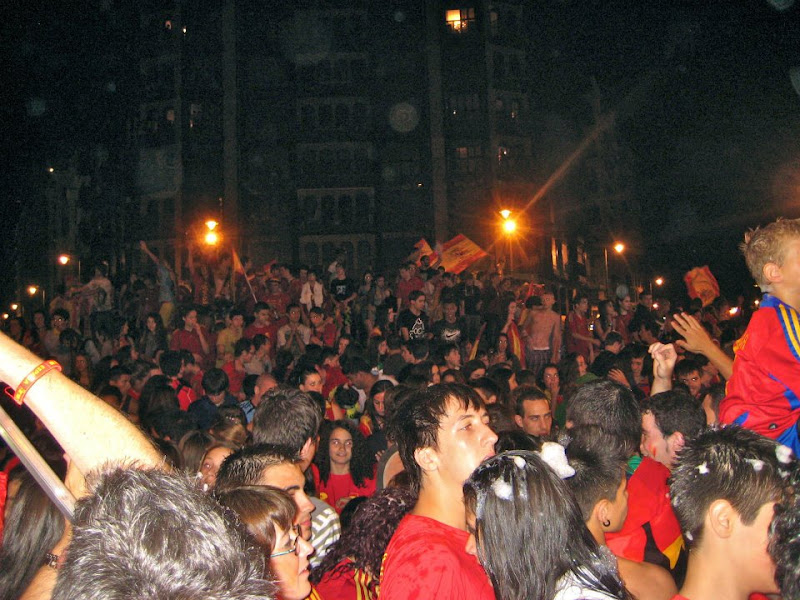 Soaked to the bone with a stupid grin plastered on my face, I had never felt such euphoria. Everyone knew we had experienced something historical, and in that moment everyone was so proud to be Spanish, so proud of their team, it just rubbed off and you couldn’t help but celebrate with them. Spain’s national pride was so overwhelming, so absolute, I had never seen anything like it. I’ve never seen Americans get together like that, just so happy and so proud of our country, especially over something like soccer. That night I felt like Spain shared something special with me, a moment I will remember forever.

Were you in Spain when they won one of their major soccer titles? Have you ever been in a place that demonstrated a moment of such strong national pride? What do you think about Spanish football?