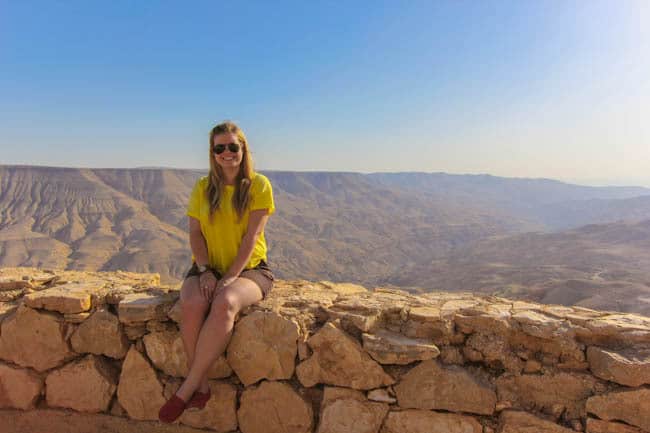 Is there anything more poignant, more meaningful, more memorable than witnessing an epic sunset while traveling?

Ok, so I kinda have a thing for sunsets, but still, after a long day of travel and exploring new places and spaces, I love nothing more than watching the afternoon come to a close beneath a rainbow of colors. The perfect end to a perfect day.

Jordan has no shortage of spectacular sunsets.

Though I’ve only been back in the US for a week, it has taken me that long to begin to process and wrap my mind around my recent trip to the Middle East. Where to begin? What to write about today?

I could write about my favorite experiences around Jordan, or about all the amazing food I got to try (so.much.hummus) or even about the day I fell off a camel (soon, I promise!). Too many options to chose from! 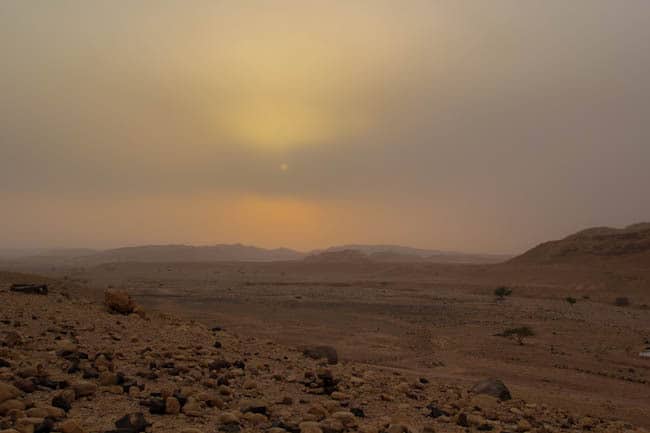 As I found myself sorting through thousands of Jordan photos this morning, I was struck by how many magnificent sunsets I was lucky enough to witness. From watching the big eastern sun dip below the desert horizon to marveling at how the rose-red rocks glowed and changed colors as the day drew to a close, I was consistently surprised by the sunsets in Jordan.

And what made each sunset even more memorable was the fact that they were each accompanied by a special moment, ingraining each day, moment and location upon my memory forever.

Are you a sunset person? Where have you seen the most spectacular sunsets while traveling? 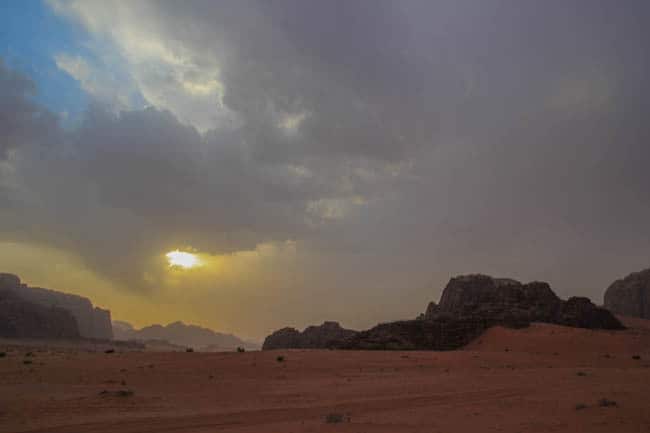 As we said goodbye to the hustle and bustle of Jordan’s capital city, Amman, we slowly traversed the narrow mountain roads and switchbacks towards the Dead Sea. As the setting sun turned the arid landscape red and gold, we checked into one of the coolest hotels I’ve ever stayed in. Located 850 feet below sea level in the Wadi Mujib canyon, the Evason Ma’in Hot Springs and Six Senses Spa is a paradise, situated along several waterfalls and natural hot springs.

Ditching our bags and throwing on our bikinis, we trekked down towards one of the waterfalls, lounging around in the temperate water before heading back to our rooms to get ready for dinner. Grabbing my camera, I threw open my balcony doors for the first time and my mouth dropped open. 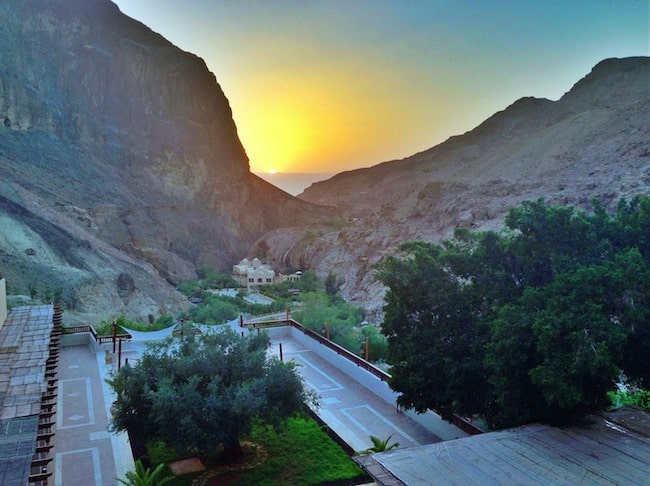 Looking out at the valley between two mountains, an orange ball of fire was slowly dropping behind the desert and the Dead Sea.  If I wasn’t convinced I was in paradise swimming under a thermal waterfall, I was now.

This was my first proper sunset in Jordan, and boy, it was a whopper! As the insects chirped and the waterfalls thundered in the distance, I breathed in the hot, desert air and smiled to myself. As much as I loved Amman, from my third floor balcony in Ma’in as the sun was setting, I first realized just how special Jordan really was. 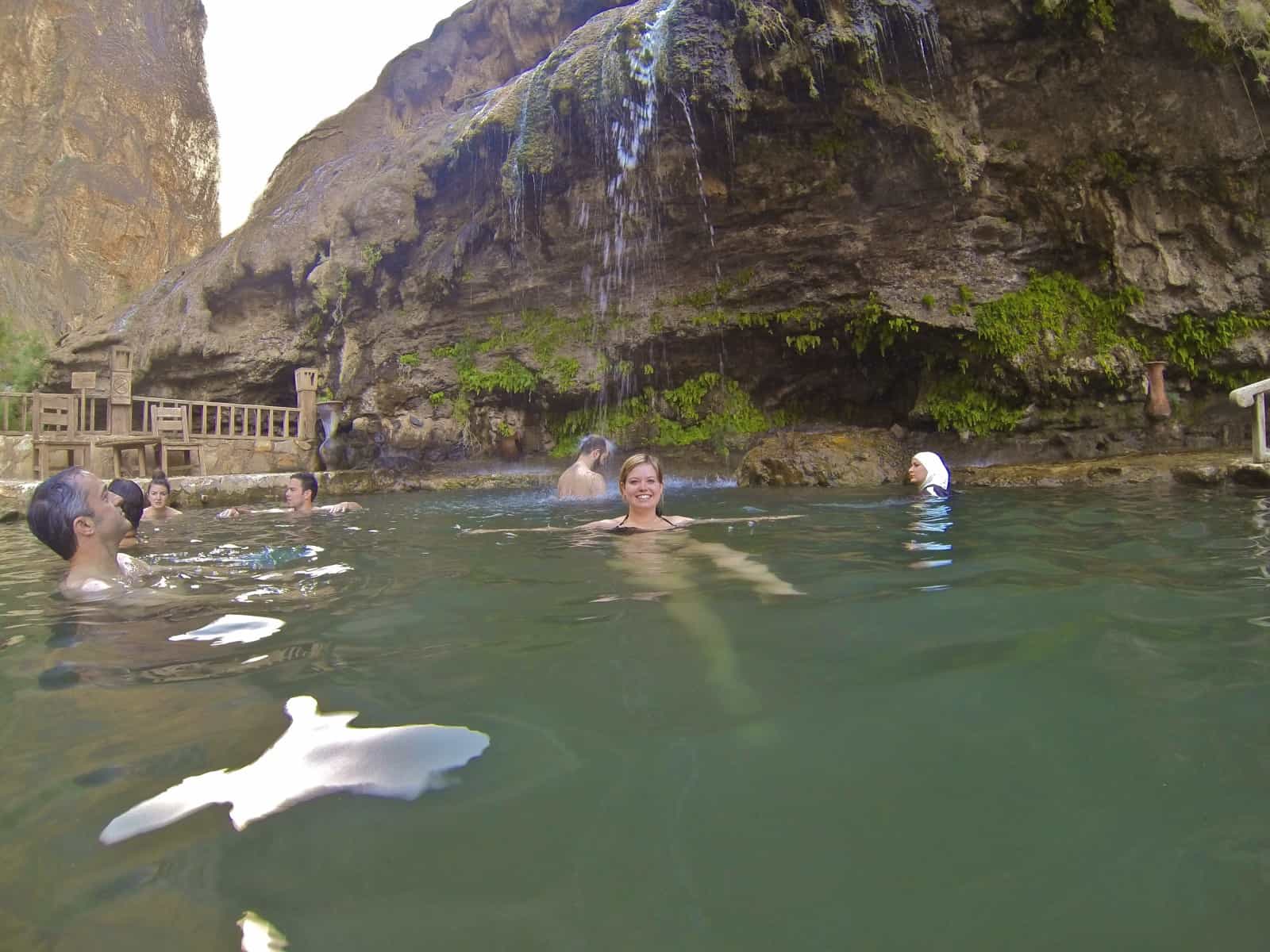 Feynan Ecolodge in the Dana Biosphere Reserve has to be both one of the most innovative places I’ve laid my head down while traveling and also one of the most challenging places to reach. We arrived after a 5 hour hike through the reserve where I sadly realized that 3 bottles of water in the desert with no shade was a rookie error.

After a welcoming shower in my electricity-free abode and chugging down approximately 2 gallons of water, we gathered downstairs to go for a sunset walk with the local Bedouins. As our feet crunched on the rocky moon-like ground, we chatted about the Bedouin culture and played games with the local kids. 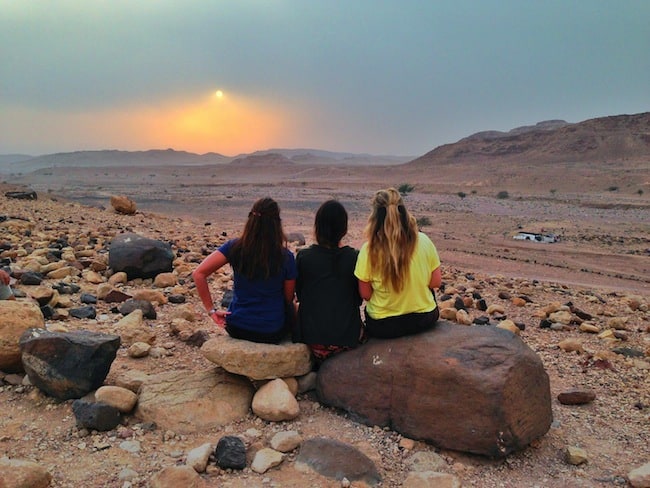 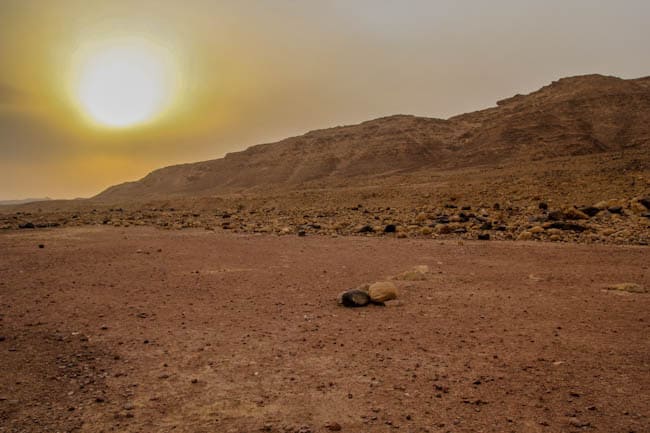 Perched on a rock, watching the sun slowly sink behind a thick layer of sand and dust, we drank sage tea and conversed with Hussein, a local Bedouin and one of the most interesting people I’ve encountered on my travels. Over a glass of steaming hot tea, he told us how he met and fell in love with his Hungarian wife. As the sun started to sink faster, I pulled out my iPhone and asked him to take a photo, trying to show him what buttons to click. Laughing, he pulled out his own iPhone and began showing me some great photos he’s taken of his daily life.

Chatting with Hussein as the sun set over the Dana Biosphere Reserve, I was reminded of tradition meeting with innovation. It was also a firm reminder of just how much meeting with locals and learning through experience meant to me when traveling. 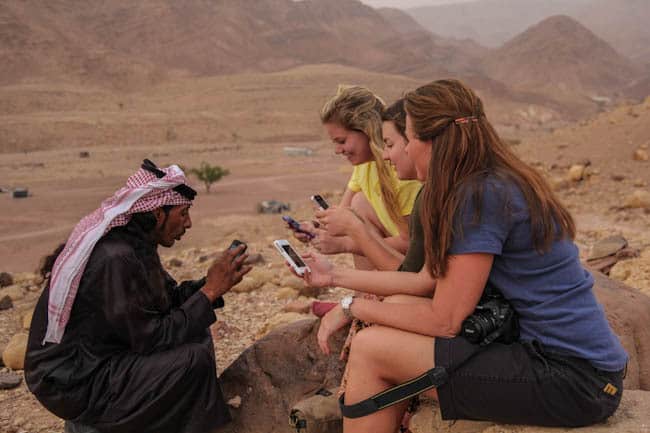 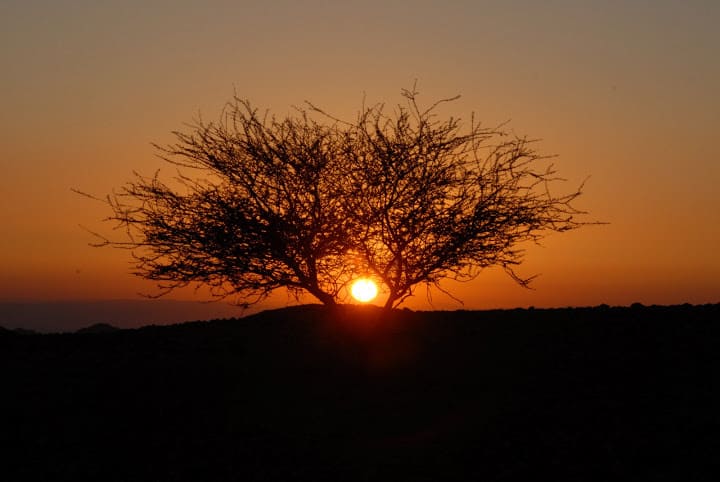 If there was one place I was really looking forward to on my trip to Jordan, it was Petra, and let me just say, it did not disappoint.  We spent the day exploring the vast, ancient city, wandering along narrow canyons and exploring the famous Indiana Jones facades. As the late afternoon sun began to set, we negotiated donkeys to carry us up to a secret viewpoint that overlooks the famous treasury. Clinging to my donkey for dear life, we negotiated very worn, narrow staircases that dropped off straight ledges leading us high above the canyons, a journey meriting a post all on its own.

I even videoed the episode on my GoPro camera since it was quite possibly the most terrifying thing I have ever done. 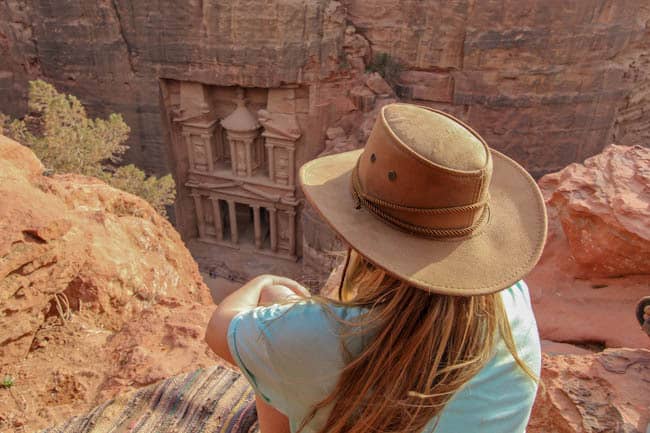 As the sun began to dip behind the mountains to our back, it turned what originally seemed to be an orange sandstone, a beautiful rose, illuminating the famous Petra treasury facade pink. Perched on the edge of the cliff, with my arms around my knees and my 5 Jordanian dinar Indiana Jones adventure hat on, the wind whistled through my sandlogged hair bringing about a moment of pure bliss and tranquility. 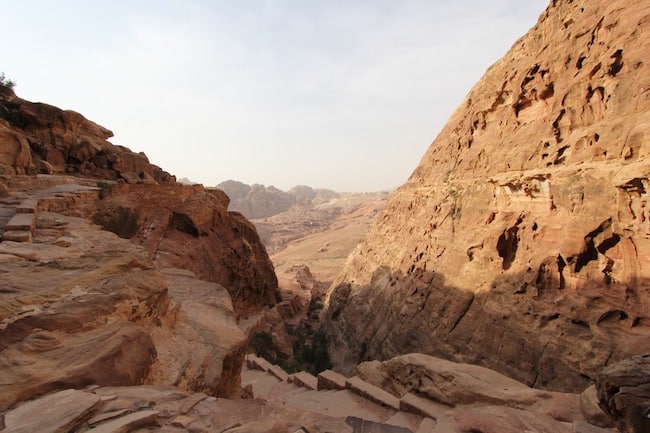 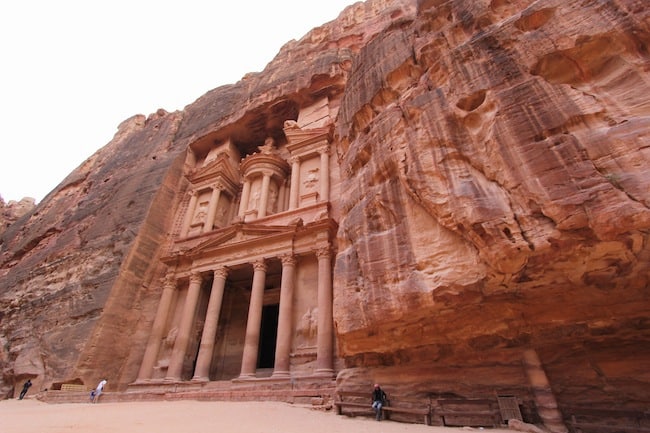 Wadi Rum is the famous desert valley in Jordan and it means the Valley of the Moon, which I think is a pretty accurate name. Walking along barefoot on the dark sand, it is easy to imagine you are lost in some lunar landscape, unchanged for millenium.  Arriving in the late afternoon, we piled in the back of a bunch of 4x4s to explore the desert, following in the footsteps of giants like Lawrence of Arabia.

As the sandy wind blew through our hair, we turned up the music inside the jeep and learned to dance along to the traditional sounds with our amazing guide Ibrahim. As the afternoon clouded over, the sun would peak here and there through the stormy skies, creating a perfect dramatic backdrop to our tour. Kicking up sand, we shimmied our shoulders and wiggled our hips trying to imitate Ibrahim in the classic Arabian dance moves, and failing miserably. (Entertaining video here and at the end of this post). 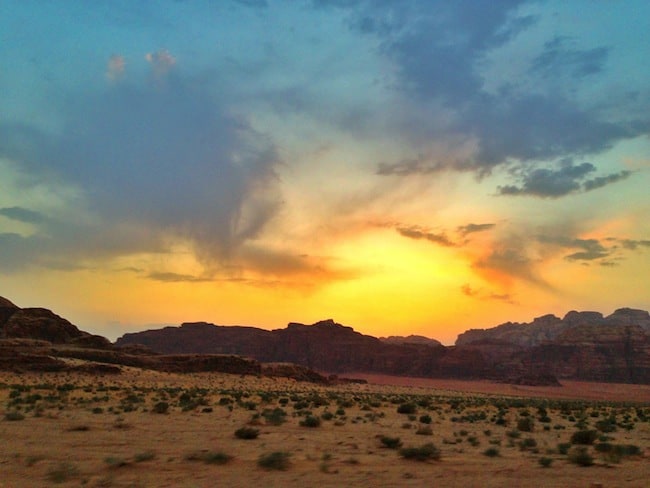 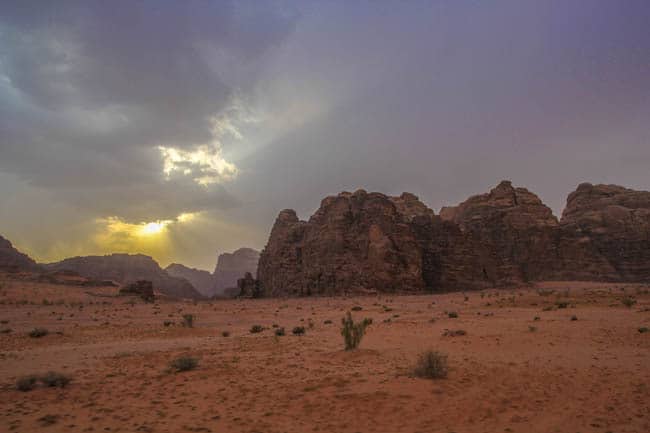 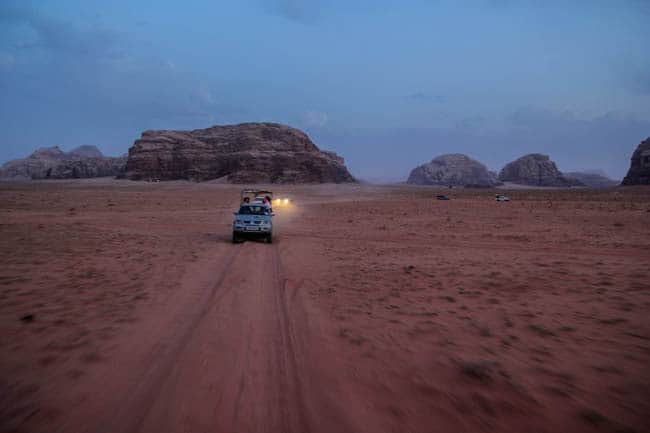 For the perfect end to the perfect trip in Jordan, we piled back in the bus to head out to the Dead Sea. As the sun started to set across from us over Israel, we threw on our bikinis and ran down to the beach at the Mövenpick Resort. Beneath the hot glare of the sun, we tip-toed our way down to the water and eased our way in. As soon as you step into the Dead Sea, you float. Because of the high density of the super salty water, you can’t sink if you tried. Even my GoPro camera floated along beside me.

If you have any cuts or open wounds, the water starts to sting like a bitch. Unfortunately, I had a skinned elbow from my tumble off the camel in the Wadi Rum, so I had to run out howling after only a few minutes to rinse it off. Then it was mud monster time, where we smeared ourselves from head to toe with the mineral-enriched mud from the Dead Sea. You know, for health purposes. Not because I still like to play in the mud. 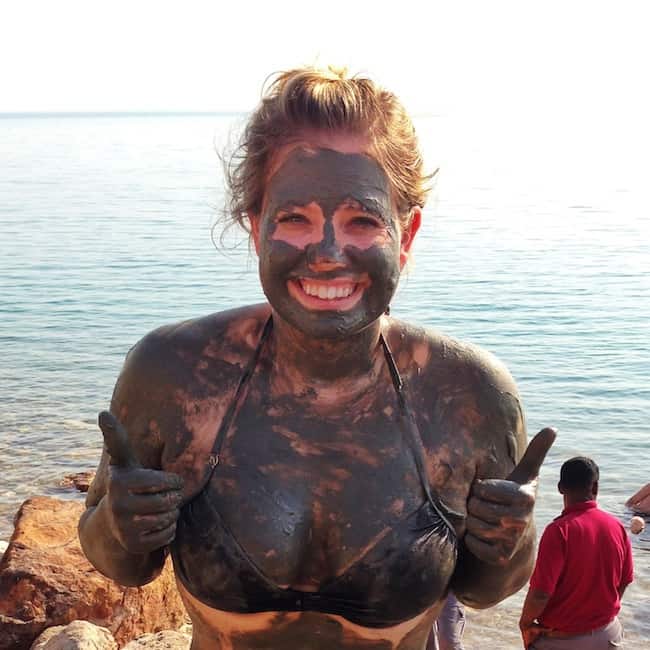 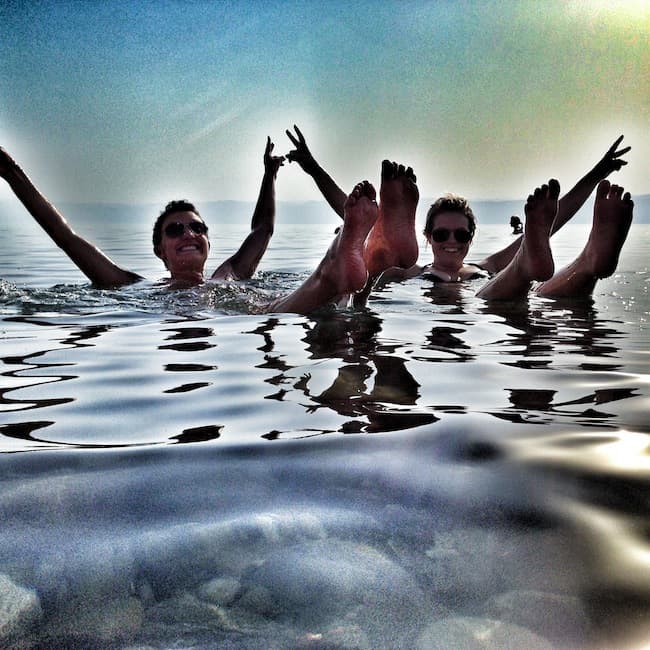 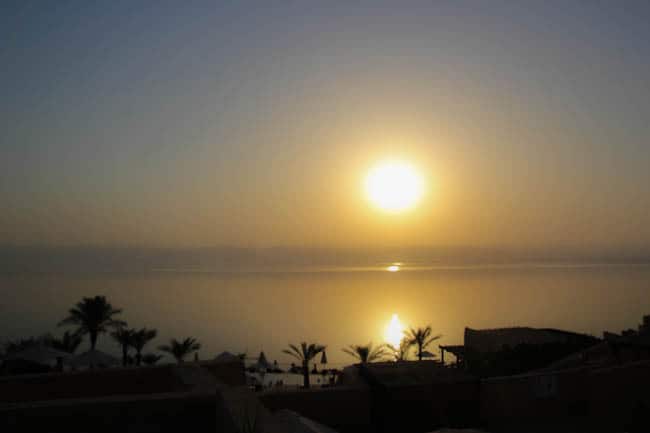 As the sun started to set over Israel and Jerusalem in the distance (how many sunsets get to say that?!) we cleaned ourselves off and headed up to the infinity pool overlooking the Dead Sea.Plopping my tired self in the water, I folded my arms on the ledge overlooking the sunset and smiled.

Of all the sunsets I was lucky enough to witness while in the Middle East, that last night was by far the most memorable. Under clear blue skies, a perfect orange globe surrounded by a halo bobbed in the distance over the Dead Sea. It was easy to float in that pool watching the day wrap up in front of me and reflect back on my time in Jordan with nothing but a happiness and a smile.

What a way to end my time in Jordan.

Have you ever been to Jordan? Would you like to go one day? Where have you seen the most memorable sunset while traveling? 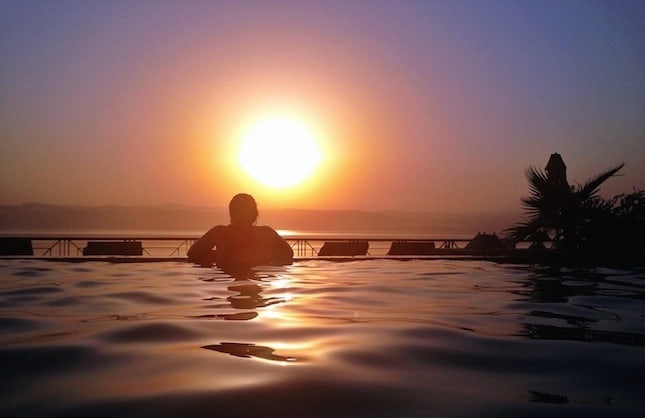 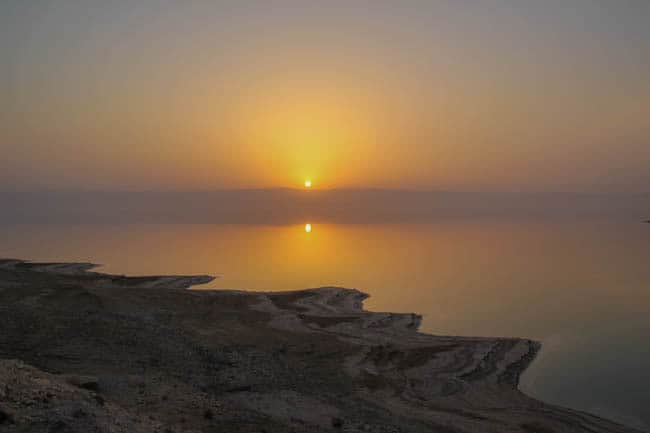 50 Comments on “5 Sunset Stories from Jordan” 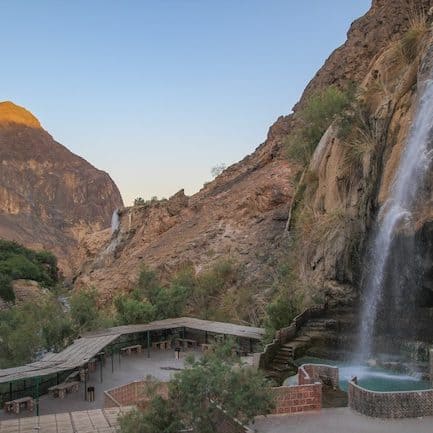 Under the Stars in the Jordanian Desert

When I was growing up, I was quite a feral child. Running around…Read More 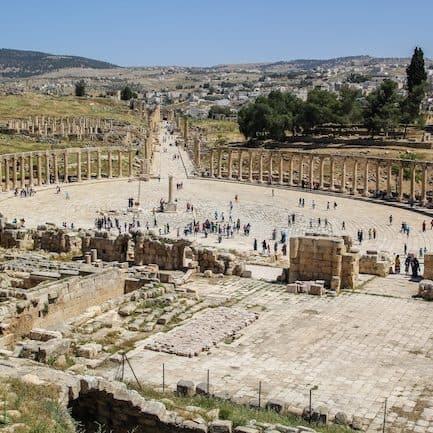 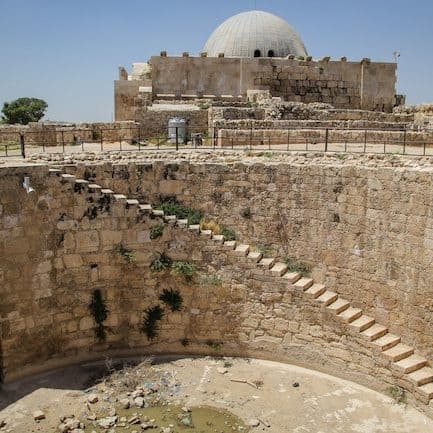 It was a hazy hot day when we were introduced to Jordan's capital,…Read More
More travel stories