Home » Blog » Adventures » Under the Stars in the Jordanian Desert

When I was growing up, I was quite a feral child. Running around from one imaginary adventure to another in the otherworldly forest that was my backyard, I always had to be dragged inside for dinner with twigs in my hair and mud on my knees.

And let’s not even talk about bath time.

Spending my summers camping and trekking with the best girl scout troop in the universe, I learned important lessons (and earned colorful badges) like starting a fire without a match and rowing canoes through big rapids without falling out.

Up until college I considered myself to be pretty outdoorsy, enjoying to spend as much time outside and under the sun as possible, communicating with nature and all that crap. But somewhere along the line, things changed. It’s hard to put a finger on when, but I think it had to do with me moving to Europe.

Completely enamored by the possibility of hopping to Paris for the weekend or partying it up in a beach town, and enthralled by the ease of travel around Europe, I left my wild nature back at home in exchange for a year (or three) of shiny discotecas that never closed and cheap booze.

Let’s be honest here: to be “outdoorsy” when you’re living in the city center is not exactly easy, especially when you can’t drive a manual car (to rent), you’re broke and all your friends are in the same boat as you. And at the risk of offending my feminist college cohorts, I’d even add that Spain (miraculously) managed to turn me into a lady. Somewhat.

It only took 3 days of me turning up to work at my school in leggings, glasses and no makeup and having my students ask me if I was sick to make me realize, that hey, it’s totally fine to give a shit about my appearance. In fact, it feels good to look nice in public. Only took me 21 years to realize.

Better late than never, am I right?

So what does this have to do with anything? Don’t worry, I’m asking myself the same thing.

Subconsciously I guess I realized after a while I was unhappy with how I was traveling, and deep down I was yearning to get back to my animal roots and get dirty in the woods and sleep under the stars again on a regular basis.

And where did I have this profound, existential realization? In a teepee under the stars in a biosphere nature reserve in Jordan.

I sure know how to pick my moments.

There is something just incredibly cliche but true about laying out under the stars, way out in the middle of nowhere, triggering some scary deep thoughts, right? Right? Please say this is not just me. During my time in Jordan, I managed to have not one, but four nights out in the desert, enabling to reflect and reevaluate my priorities when I travel.

Check out my 4 favorite under-the-stars-and-some-deep-thinking-about-life-and-travel moments from my trip to Jordan. 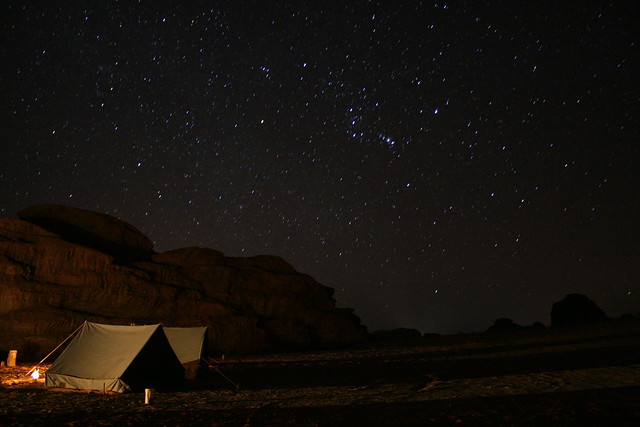 1. Camping in a teepee the Dana Biosphere Reserve

Night had fallen by the time our jeep trundled into the Dana Biosphere Nature Reserve in Jordan. The stars had yet to come out and we could smell dinner cooking as we found buddies and grabbed a teepee for the night.

After chowing down, we settled into our sleeping bags after a long, hot day of travel – after I spent a solid 20 minutes searching for spiders around my mat with my iPhone flashlight and keeping C’est Christine awake.

Thinking I would never sleep with things like spiders and scorpions and god knows what else around me, I promptly fell asleep only to wake up a few hours later when mother nature called and let me know that I had had way too much tea. As a lay there on my back mentally debating whether I wanted to climb out of my cozy sleeping bag and walk to the scary outhouse alone or now, I realized the teepee was glowing. GLOWING!

Why was it glowing? I was so confused.

Climbing out of the tent, I realized that it was glowing because the sky was so clear the stars and the moon were so bright – the whole campsite was illuminated! No need for haphazard iPhone apps – I could go to the bathroom by moonlight. Talk about becoming one with nature!

Standing there under the moon that was bright like the sun at 2 in the morning was such a surreal and defining moment for me. Alone and at peace, it reminded me of all the times I used to camp and sleep under the stars growing up, and how much I missed it. I needed to do this more often!

Driving along the arid landscape around Jordan, the hazy desert land broken up with mountains and beautiful views sometimes seems both otherworldly and monotonous. Heading towards the Evason Ma’in Hot Springs, suddenly the ground rips open to reveal the most beautiful oasis you’ve ever laid eyes on.

Feeling like you’ve landed on Mars, the deep valley reveals cascading waterfalls, hot spring pools and leafy palm trees. We arrived just in time to witness a glorious sunset from out balconies, disappearing over the mountains and Dead Sea in the distance.

Considering how hot it was outside, it was suggested to wait til the sun went down to check out the big natural hot springs and waterfalls.

Grabbing our towels and swimsuits, we walked along the road from the resort towards the public hot springs. Arriving around midnight, we had the place to ourselves. A huge waterfall fell into several different pools below, all different temperatures. Throwing out bags down, we hopped in, relaxing in the hot water.

Sitting there with great friends, in hot churning water up to my shoulders while a powerful waterfall thundered down behind me, I looked up at the twinkling sky, thinking – is this real life?

It was a simple, pure and happy moment, that remains to this day, the highlight of my entire trip to Jordan. Not something I’ll soon forget.

In fact it was so perfect, we got up with the sunrise the next morning and came back.

3. Rooftop stargazing at the Feynan Ecolodge

After  our first night camping under the brightest moon in the world, we hiked for several hours in the Dana Biosphere Reserve out to the Feynan Ecolodge, a solar powered candle-lit lodge way out in the middle of the desert. The perfect place to get away, be one with nature (and all that stuff) and to stargaze.

After an incredible sunset hike and drinking coffee with the local Bedouins, we sauntered back to the lodge to find it completely illuminated by candlelight. So magical. Eventually we made our way to the rooftop to spread out along several cozy mats and stare at the stars.

A very modern, enormous and a little bit intimidating telescope took center stage, and we took turns while one of the guides pointed out all different constellations and stars to us. So cool.

Laying there under yet another perfect midnight sky, so far removed from the hustle and bustle of DC urban life back home, I could feel a huge smile creep on my face.

This was my kind of travel.

4. Star trails in the Wadi Rum

Following in the footsteps of Lawrence of Arabia – or rather in 4×4 offroading truck, the modern equivalent, we made our way deep in to the famous Wadi Rum desert during a magnificent sunset ride. Eventually we arrived at the Captain’s Desert Camp and settled in around a hot fire to sing songs, learn some Bedouin dances and eat a fabulous camp dinner. With full stomachs and smiling faces, we lounged around smoking mint hookah and staring at the stars.

While people began retiring to their tents, I made my way outside the camp and joined a group of Mexican journalists who were traveling at the same time as us. Relishing the chance to step away from the camp and speak some Spanish, I ended up spending hours with them on the fringes of the site as they tried their hand at star trails and super long exposure photography.

You see, the stars in the Wadi Rum were the most magnificent of entire trip. The furthest from civilization and light pollution meant that we had the clearest, most incredible nighttime views I’ve ever experienced – it was the perfect ending to the trip.

Not wanting to go to bed and miss out on the stars, I stayed up almost the whole night with these journalists, having the most deep and philosophical conversations. It was just an incredible night.

These were the kinds of moments I had been missing over the past few years. Taking a step back away from all the craziness, all the rush, all of the stress that is involved with big “see everything in the world” trips, and realizing that simple, peaceful quiet moments abroad are often the most meaningful and profound. These small, unobtrusive instances ended up being the best part of my trip.

So thank you Jordan and your beautiful stars for reminding me of everything I was missing and that’s A-Ok to get dirty once in a while while on the road.

Where’s the most beautiful place you’ve seen the stars? Do you like camping and being outside when traveling? What’s your travel style?

Many thanks to the Jordan Tourism Board and My Jordan Journey for hosting me in Jordan. Like always, I’m keeping it real – all opinions are my own – like you could expect anything else from me.

Written by Liz and was published on September 9, 2013 in Adventures, Destinations, Jordan, Musings and tagged in jordan

45 Comments on “Under the Stars in the Jordanian Desert”

Sleeping under the stars on the Great Barrier Reef

Exciting news everyone, in one week exactly I'll be boarding a plane back…Read More

It was a hazy hot day when we were introduced to Jordan's capital,…Read More
More travel stories