My second full day in Lanzarote was just as jam-packed as my first. It was a bit overcast when I woke up, but it burned off by mid-morning. I decided to check out the famous Sunday market in Teguise, the old capital and located smack dab in the center of the island. It gets going after 9am, and I arrived early so I could see as much stuff around Lanzarote in the morning to spend the peak sunny afternoon hours passed out on the beach working on my tan, Jersey Shore style.

Teguise is a cute colonial town, filled with small white buildings and cobblestone streets, nothing special, but it comes alive on Sundays, packed with stalls. It was super easy to get lost. There are a lot of stalls that sell the same cheap tourist crap and clothes you see at every market in Europe, but there are plenty of artisan stalls and local crafts to be found if you look close enough. I bought only two things (and crepes, which don’t count): a beautiful ceramic and pumice bowl with melted sea glass for myself, which I promptly dropped in the parking lot and broke but I was able to super glue back together once I stopped sobbing (jk, but not really, why am I such a materialistic klutz?) and a Dutch pansy flower pressed into glass for a necklace for my dear mamá (if you’re reading this mom, surprise!)

Afterwards I headed out west to the Timanfaya National Park to see some volcanoes! Yes, the Canary Islands are volcanoes, if I hadn’t mentioned it. You have to arrive to the park by car, which was great considering I was conveniently renting a convertible Saab (ballin’). Once I paid the fee at the entrance, you drive through a good deal of volcanic landscape before arriving at the visitors center. I had never seen terrain like that before; it felt like driving on Mars, or maybe just into Morder. To see the volcanoes and the rest of the park, you have to catch one of the park’s private buses that drives you around on some pretty scary twisty roads. No hiking or anything, which you will understand once you look at my photos. Not to mention there is still an active volcano there and the ground seeps out gas; most of the current landscape was formed during the 1730’s with many eruptions on the island. It is definitely worth visiting just to say you got to see some volcanoes.

Once I got my fill of the volcanic landscape I headed south along the western coast to a place called el Golfo, a green lagoon next to some rocky cliffs along the ocean. A crater was formed during the eruptions 250 years ago which was then filled in with water during flooding turned a poisonous green color due to the algae. It is a nice little walk up to the cliffs overlooking el Golfo, the black beach, and the ocean, though the water is pretty rough and swimming is “not recommended.” Though who would want to after seeing the giant waves bashing the hell out of the rocks below? 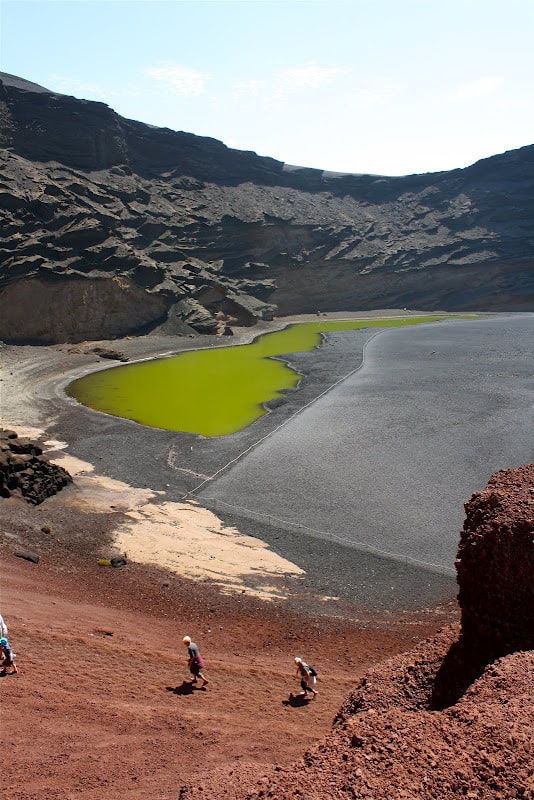 My final stop for the day before heading back to the beach in Puerto del Carmen, was a place called los Hervideros, a series of lava formed cliffs and caves along the western coast. Huge waves batter the cliffs and are forced around the caves below, shooting upwards through various holes and rock formations. It looks like the water is bubbling and boiling, hence the name, Hervideros, which comes from the Spanish, hervir, to boil. You can walk around the cliffs on paths to see the waves below. Sometimes when there are huge storms, there are some huge waves that close the site to the public, which clearly didn’t stop some idiots from filming these videos here and here and here. It didn’t look like that when I was there, but it still is not a place where you would want to fall in. Pretty awesome, huh?
Have you ever been to some of these places? What did you think? Have you ever traveled to a volcanic lanscape?

Anyone want to hanker a guess what this means? Because I have NO idea!

Written by Liz and was published on February 28, 2012 in Uncategorized and tagged in el golfo, lanzarote, las canarias, los hervideros, teguise, the canary islands

On my last day in Lanzarote, I decided to save the best for…Read More

Nerja: land of beauty and magic

I am not a big vacation resort traveler. When I get the time…Read More
More travel stories