Home » Blog » Destinations » Would you like some cheese with that wine?

So after my trip up into the snow-capped Alps in central Switzerland, I decided I wanted to see more of the open countryside and quaint villages of the northeastern part of the country, right next to Germany. So I woke up at an ungodly early hour again to hop on a train to Appenzell. I was on the train for quite a long time, as Appenzell is basically on the opposite side of the country. But it was totally worth it! The region of Appenzell is very idealistic and cute, with rolling green hills spotten with black and white dairy cows, with brown chalet-type houses covered in flowers just where you would think they should be. It seems there is no ugly part of Switzerland, almost as if the government forbids it!

So I hopped off the train in the tiny town of Appenzell mid-morning. Let me just say I can attest to the fact that Switzerland has a very high life-expectancy rate. I was the youngest person on the train by about 40 years, and again it was a fiasco of old people attempting to talk to me in Swiss-German, which is in fact NOTHING like the regular old German that you learn in school. I mean, even listening to my ipod didn’t defer them. “Ich spreche kein Deutsch.” Oof! What a fiasco! So back to Appenzell, I “alighted” from the train—for my American friends, I think this phrase is hysterical. Since in Europe when the translate to English, they translate using British English, sometimes the outcome is very funny. Instead of saying, please exit from the train, please get off the train, or please leave the train, they chose to say alight. Everytime I snort like a child and think, haha alight, like light someone on fire. Just like how they call erasers rubbers. hahahaha. Honestly, sometimes I don’t think I ever grew up.

Anyways, back to the story. I meandered around Appenzell for a while, taking in the sights and breathing in the clean, fresh, Swiss air. Appenzell is a very small town; it takes about 15 minutes to walk from one side to another, but it is a very beautiful walk! I sat down outside a cafe in the main square for my morning dose of caffeine and to catch up a bit on reading The Girl with the Dragon Tattoo, which if you live under a rock and haven’t read, YOU totally should. Absolutely fantastic trilogy! It was also a bank holiday in Appenzell which meant a parade, a party, and people in costume! It was very funny to watch these old ladies walk by in traditional Swiss garb with weird fan things in the hair and to have children run up to them in groups to take their picture with their cell phones. I am talking about 8 year olds here. Let’s just say it made me feel old. 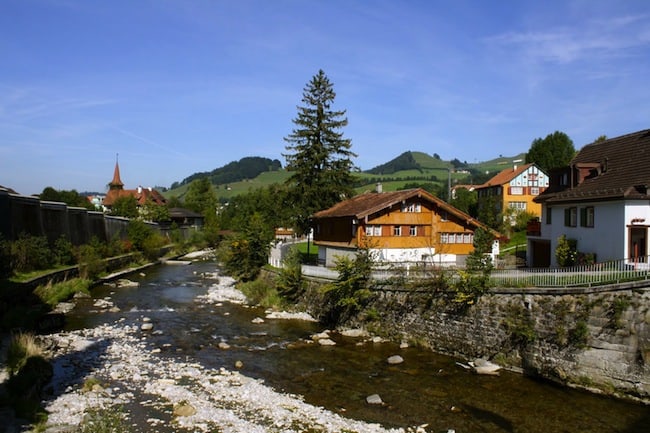 So all the buildings in Appenzell look to be about 800 years old and straight off the poster of an advertisement for visiting Bavaria. Again very quaint and very beautiful. I headed into a small restaurant tucked away in the back of the village for lunch. The waitress was another nice old lady, who brought me fizzy water when I asked for non-fizzy water and an “English” menu. I honestly should have taken a picture of the menu because it was too funny. I love it when they translate these things word for word online. Basically I understood nothing but there was a page filled with about 20 variations of a dish called Rösti. I had absolutely no idea what this was, but I figured I’d try it, so I picked Rösti Appenzell. It turned out to be AMAZING! It looks like a giant fried potato pancake noodle thing but with bacon and cheese and tomatoes and onions too. It’s also apparently a breakfast dish. Oops. 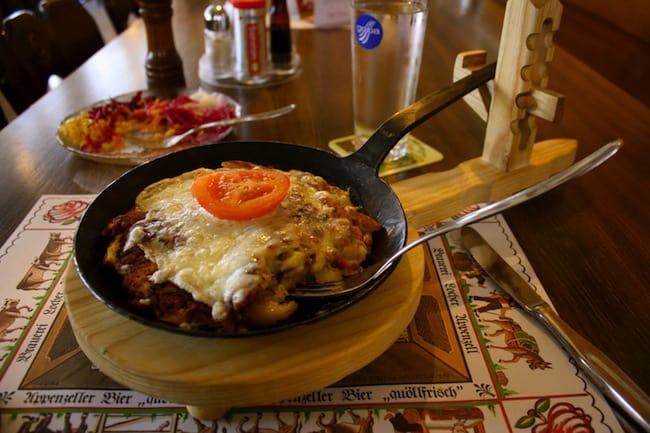 Traditional Rösti of Appenzell (I also stole that placemat)

So afterward I walked around a little bit before getting back on the train towards the larger town of St. Gallen. I, of course, wanted to stop here because the city is known for its famous Abbey and cathedral and its library (Stiftsbibliothek). I always make time to visit medieval libraries when in Europe, and this was no exception. I spent a few hours hanging out around the abbey complex, taking a quick doze on the lawn in the warm sunlight before heading up the tower of another church to take in the views of the town. The lady who was in charge of the church climbed up the tower with me to give me a tour (in Swiss German of course). That was one of the more interesting and hilarious 45 minutes of my trip. 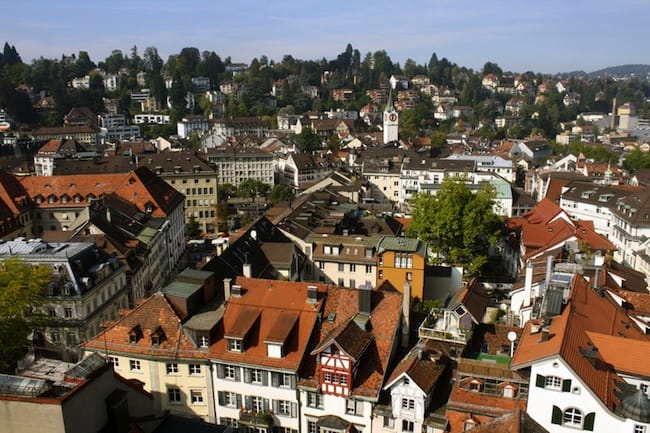 View of St. Gallen from a church tower 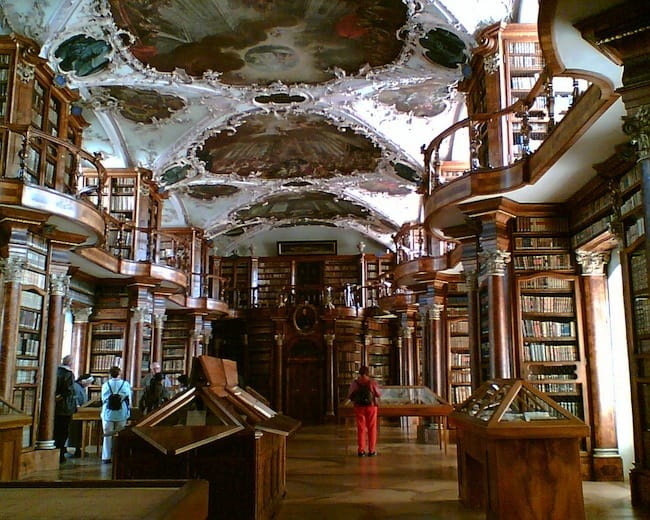 The Abbey Library or Stiftsbibliothek in St. Gallen (this is an internet photo as I was in no way allowed to sneak a pic. Lame) Image source

So at the end of the day I headed back to Neuchâtel on the train. By this time it was getting to be the weekend, which meant the biggest party in of the year -the Fête des Vendanges de Neuchâtel! This is the annual wine harvest festival of the town and the craziest weekend of the year. I definitely picked the right time to visit! The whole town is decorated and covered with confetti, with many booths lining the street selling food and drinks, sponsored by local groups. Let me tell you I found our real fast where the crepe booth was! 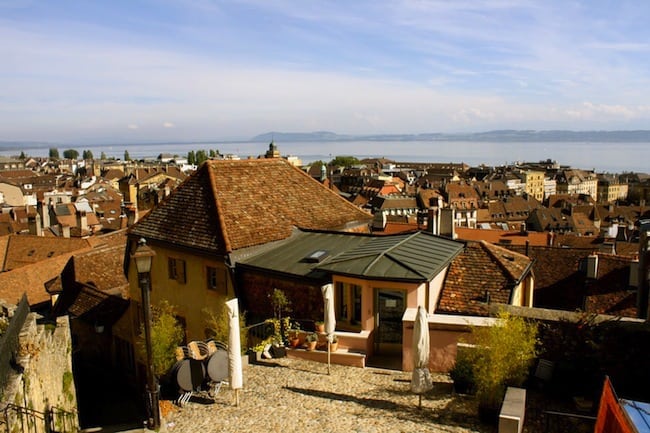 Neuchâtel is such a cute city. It’s in the french-speaking part of Switzerland and is built up into the mountains along the shores of a huge clear blue lake. Again, it looks fake. It’s a city filled with narrow cobblestone streets, sandstone buildings, and windy staircases, crowned with a lovely castle at the top. But now back to the wine festival, where yes, a lot of wine was consumed. I went out both nights which proved to be amazing fun, even though I speak no French (though, like German, I can occasionally mimic very well to trick people haha).

On Sunday, the last day of the festival and my last day in Switzerland, there was a fabulous parade! All of the floats were decorated with freshly cut flowers instead of paints. It was beautiful! And there were people walking along side the floats spraying the crowd with confetti and handing out glasses of wine. It was so cute because the little kids would hand out wine too. I couldn’t help but compare it to America, where a kid could never hold out cups of wine. Priorities people! Anyways, it was absolutely mayhem and such a great way to end my trip in Switzerland! 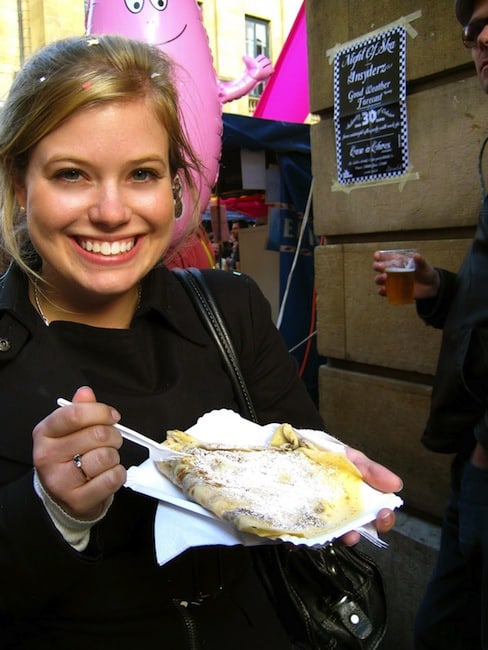 Me enjoying my first European crepe (nutella of course) of the year! 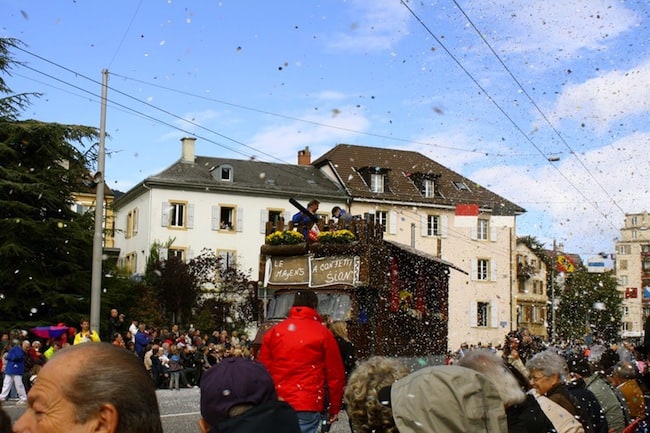 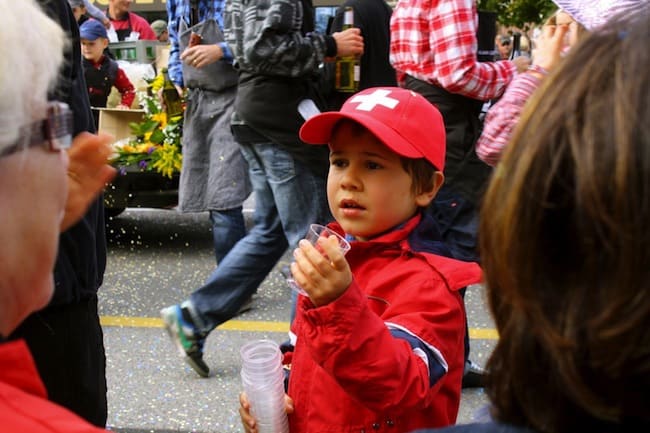 Written by Liz and was published on October 17, 2010 in Destinations, Europe, Switzerland and tagged in appenzell, neuchatel, Switzerland

3 Comments on “Would you like some cheese with that wine?” 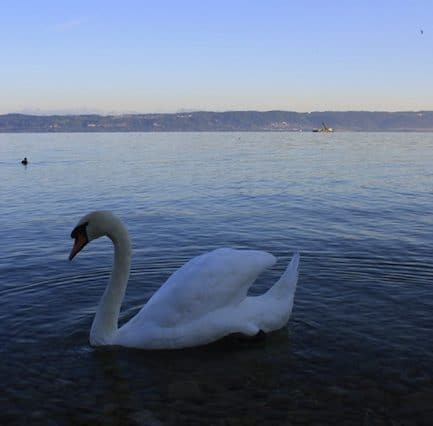 Switzerland: Land of Cheese and Chocolate

Where to begin? So much has happened since July and my last post.…Read More