0 shares
So mid-November rolled around, and since I was really missing American culture (and by culture, I mean food) my friend Carmen and I decided we were going to celebrate Thanksgiving in Spain! As an inherently American holiday, Spaniards have only a vague idea of Thanksgiving, or el día de acción de gracias. This idea almost certainly comes from watching the Simpsons-a extremely popular show here. So basically the only thing they know about Thanksgiving is that it has to do with turkeys. This of course prompted my question, where can you get a turkey in Spain. Then I started thinking and I realized that I have never actually eaten turkey in Spain or could even recall seeing it in the supermarkets, which led to me asking Carmen, are there turkeys in Spain? (¿Hay pavo en España?)
Followed by much laughter, I found out that yes, there are turkeys in Spain but its not a very popular food, so it can be tricky to find. Eventually she saved the day (like always) and special ordered one at the butchers. News of our Spanish Thanksgiving celebration spread, and some friends decided to come to town to visit! My good friend Emmalie, who is an auxiliar in Fuengirola/my moho thesis teammate/lady gaga aficionado came and stayed with me for the weekend, along with the awesome German TA miss Tilly, and then Stephanie, my new bffl from MHC who is studying abroad in Sevilla for the fall. So basically, we had an incredible moho reunion in Córdoba for turkey day. After collecting everyone from the train station on Thursday night, we headed over to Carmen’s for a late dinner. Have a mentioned what a fabulous cook/my adoptive Spanish mother is? She is great! I love being taken under the wing by Spanish families. They see me living here alone, and they think it’s the oddest thing in the world! (Spanish families are super tight-knit-I am talking they all live in the same town, occasionally in the same house, talk everyday ect.) So when they see me here alone, usually the first thing they say to me is how could I live so far away from my mama! Which leads to pity and lots of good home-cooked food! No complaints here! 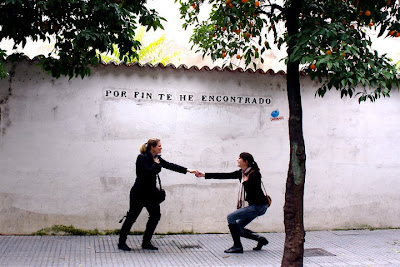 Emmalie and I under one of my favorite Córdoba wall quotes 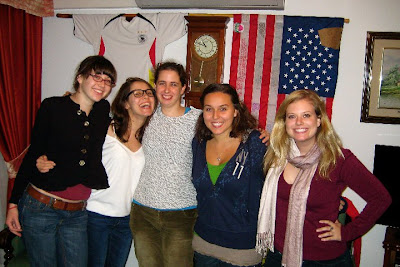 The fabulous five at Carmen’s house the first night (please note the German
soccer jersey and American flag in the background!)
We spent the next day cooking, cooking, and COOKING! Let me just say that when you buy food in Spain, it is nothing like the pristine, packaged preserved crap you get in the states. I’m talking specifically about the fact that the turkey still had a ton of feathers all over it, which are surprisingly difficult to remove; this led to the decision of, just leave them and we won’t eat the skin. Did I mention none of us had ever cooked a turkey before? Luckily Emmalie took charge and it turned out fabulous! Carmen’s family joined us, and we had one of my all-time favorite dinners. It was such a wonderful weekend and I have such good memories from it! I can’t wait for more Mt. Holyoke reunions! 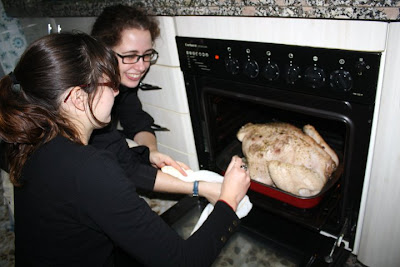 Carmen and Emmalie basting the turkey 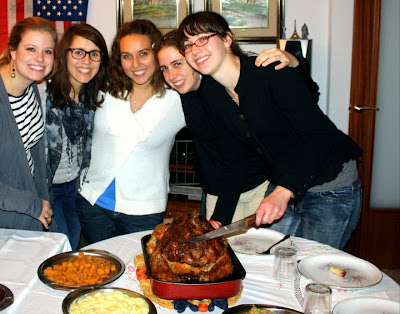 Me, Tilly, Stephanie, Carmen, and Emmalie and the TURKEY! 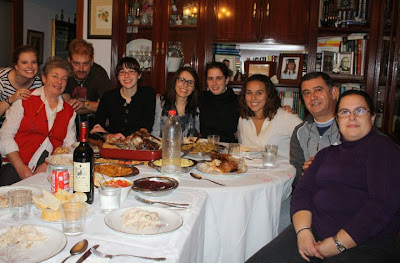 Student's New Year's Eve in Salamanca, where I studied abroad in 2007-08 What…Read More

Last Wednesday, Santa came to one of my schools to visit my preschoolers,…Read More
More travel stories