In May this year, I was lucky enough to be selected to be a part of the Antarctic Heritage Trust‘s (AHT) third Inspiring Explorers expedition – a 560-kilometre trek across the Greenland ice cap.

The AHT’s mission is to conserve, share and encourage the spirit of exploration in young people – something they believe is critical in the 21st century. Their Greenland expedition was to do just that while honouring the remarkable legacy of Fridtjof Nansen, who made the first crossing of Greenland 130 years ago in 1888.

Our team was up of six individuals; four Inspiring Explorers which included myself, Kiwi Brando Yelavich and Aussies Keith Parsons and Bridget Kruger, Kiwi Nigel Watson from the AHT and our extremely experienced Norwegian guide, Bengt Rotmo. Aside from spending two days together during the intense selection process, we were almost strangers. Strangers that we would ultimately count on when pushed to the extremes. 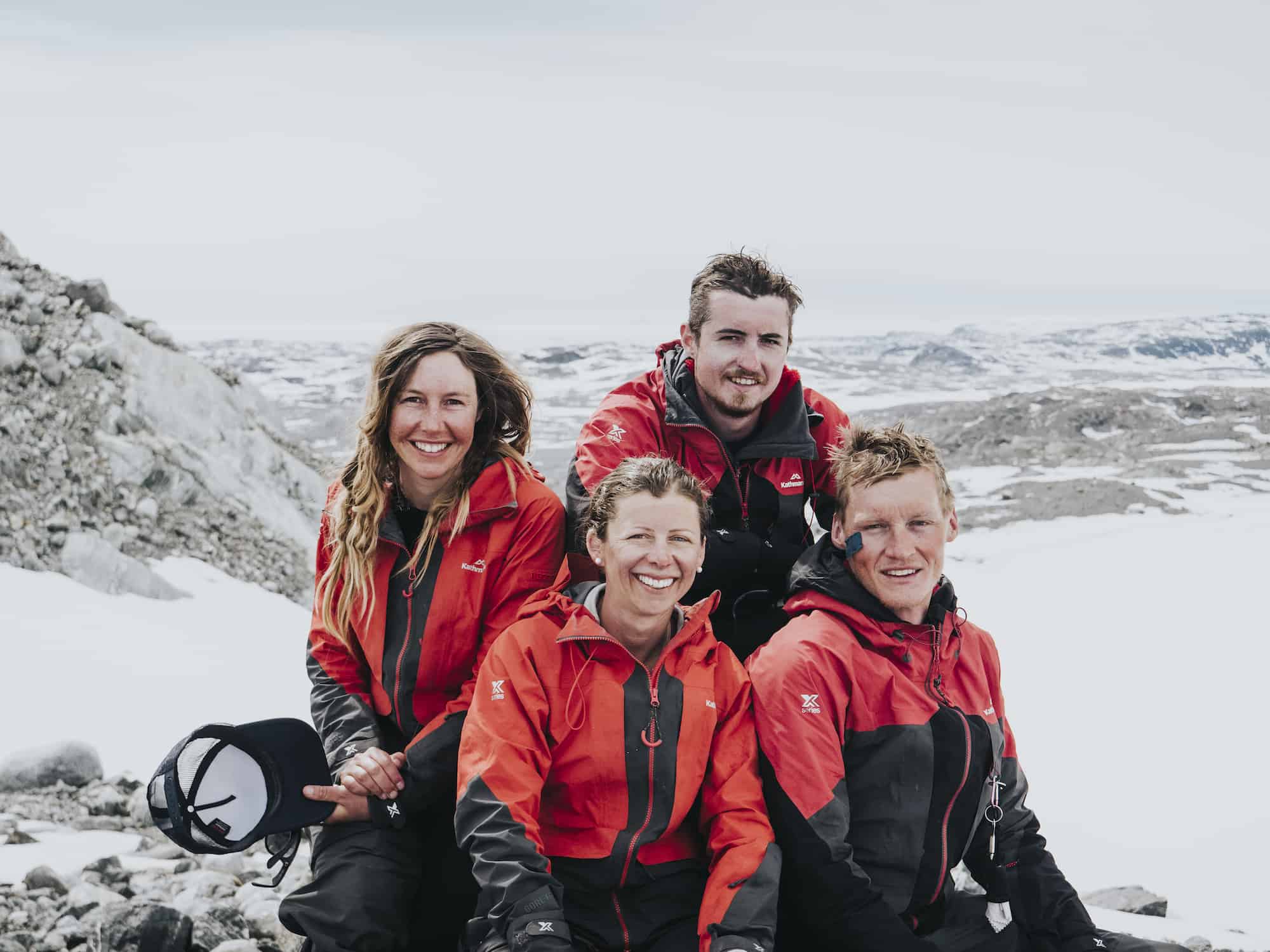 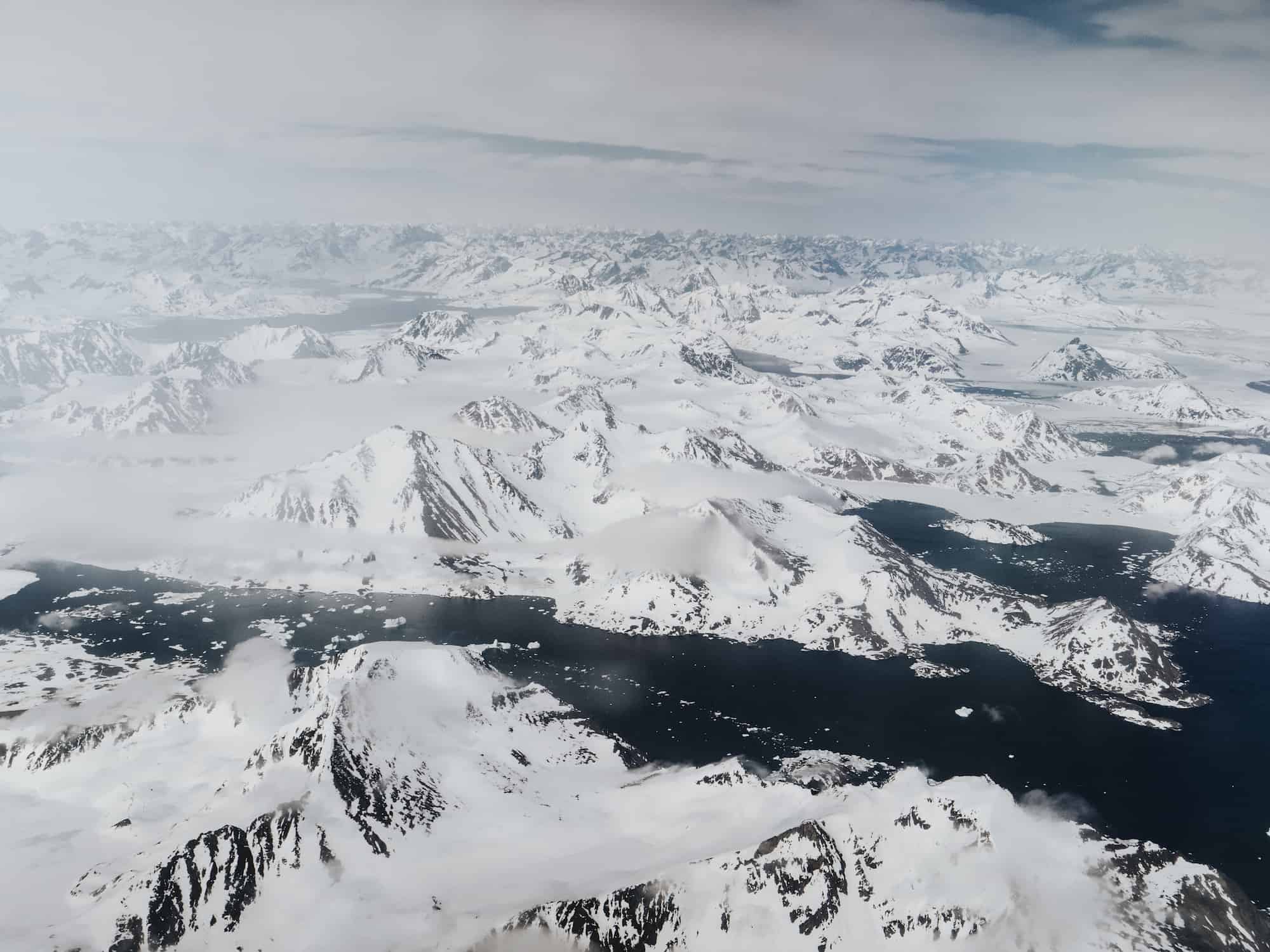 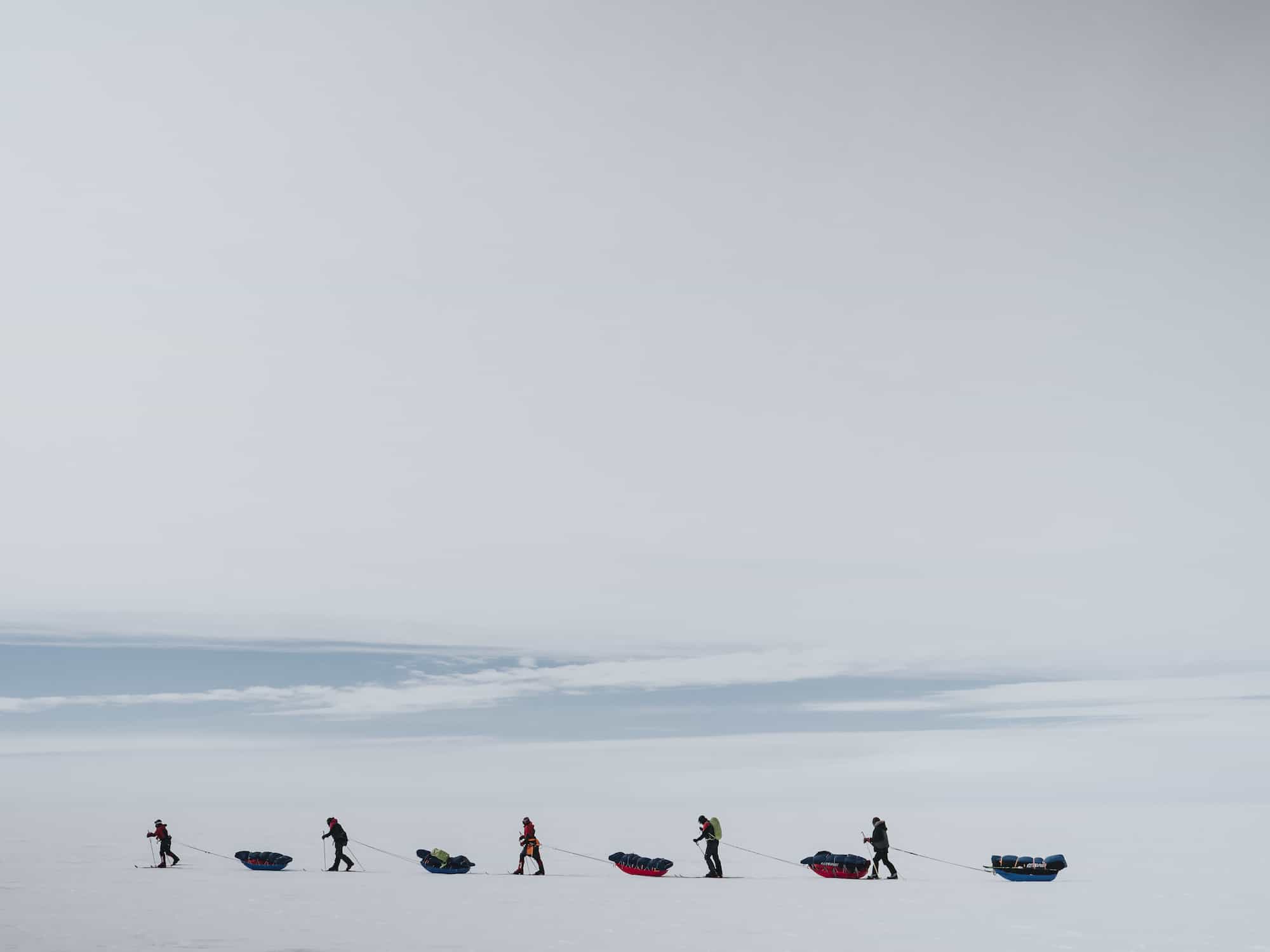 Not a stranger to endurance events, this was like nothing I have experienced before.

Encountering endless unseasonable storms, we were pushed to our maximum time limit of 29 days, almost five days longer than expected.

After 22 non-stop hours, minus one ski – Brando’s, which had shot off, never to be seen again – we reached the end of our trip. Down to the very last of our rations, with our boat having sailed, quite literally, we waited for the helicopter to pick us up and take us back to normality, a warm shower and a decent meal.

With tears slowly rolling down my sunburnt cheeks, I registered so many emotions: elation, relief, pride and an immense sense of achievement.

I was completely overwhelmed; never before had I been pushed so hard, and for so long. At times I thought I would crack, my body giving everything to win over my mind, but each time there was just enough of something stronger to fight back.

29 days skiing across the Greenland Icecap bought with it many life lessons, uncontrollable laughter and total hopelessness.

I go on adventures like these to push myself, to find myself, and to experience moments I would never imagine in my wildest dreams. Greenland dished these up in bucketloads! Here are five of my most memorable moments from Greenland! 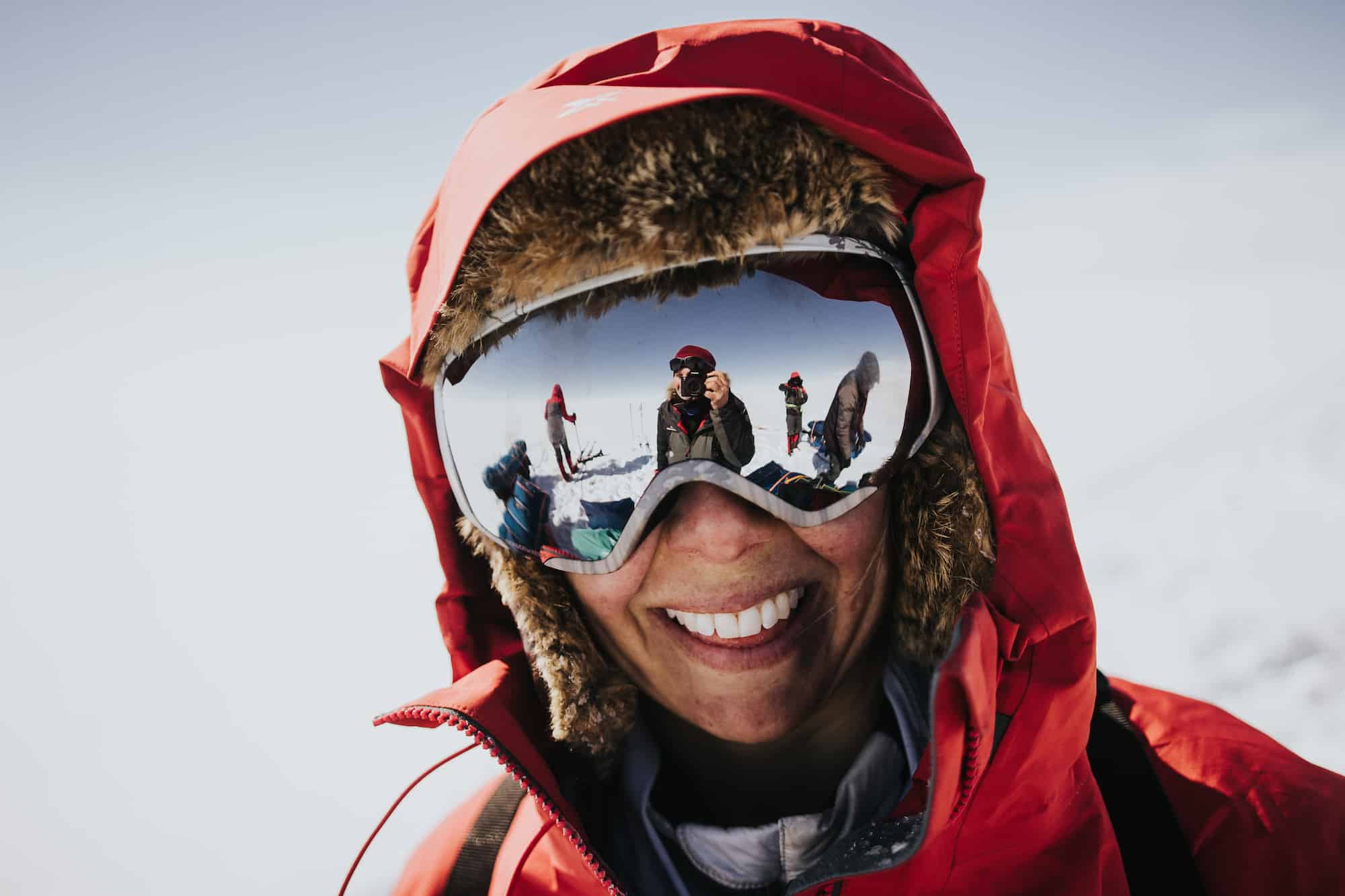 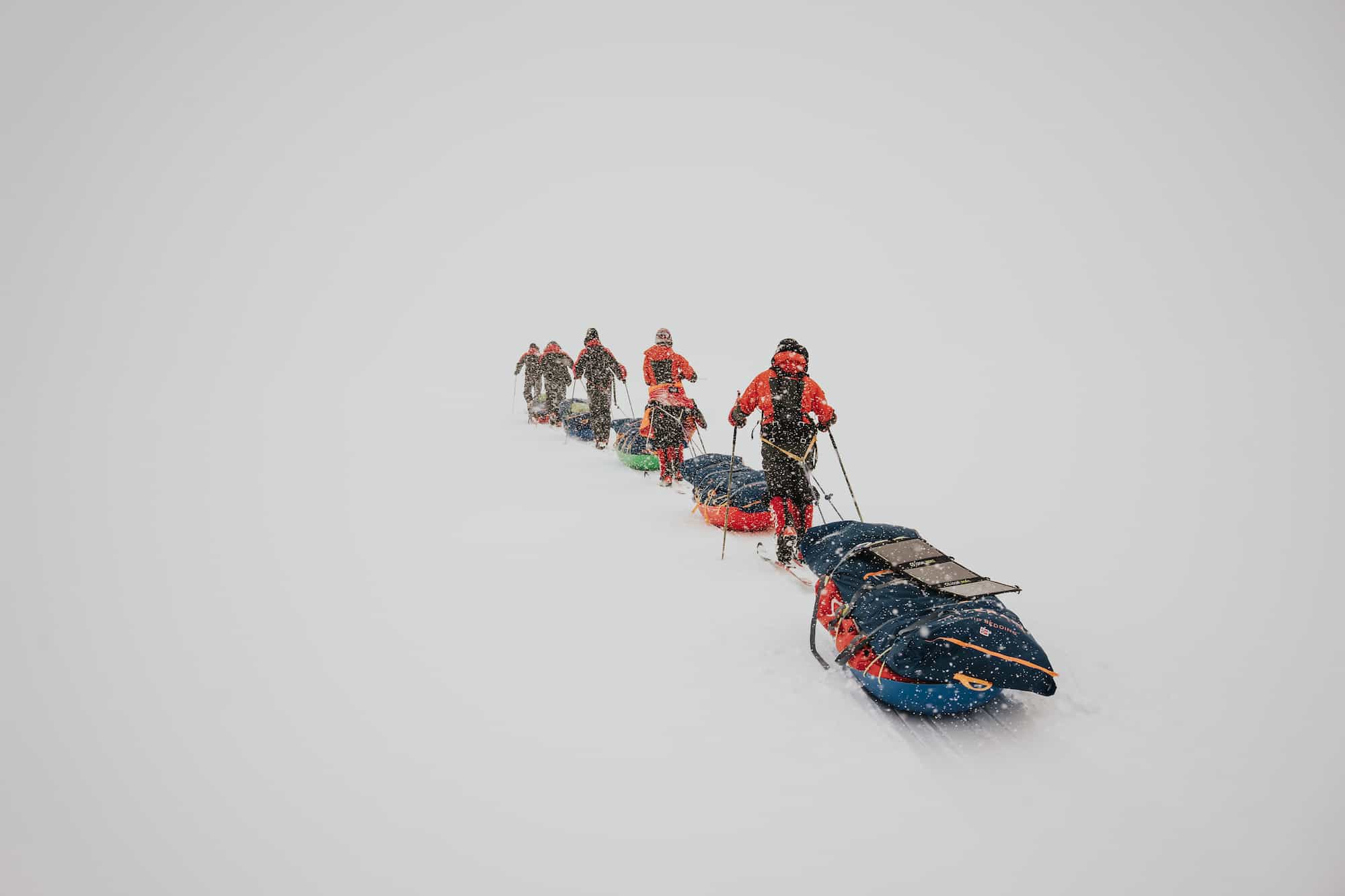 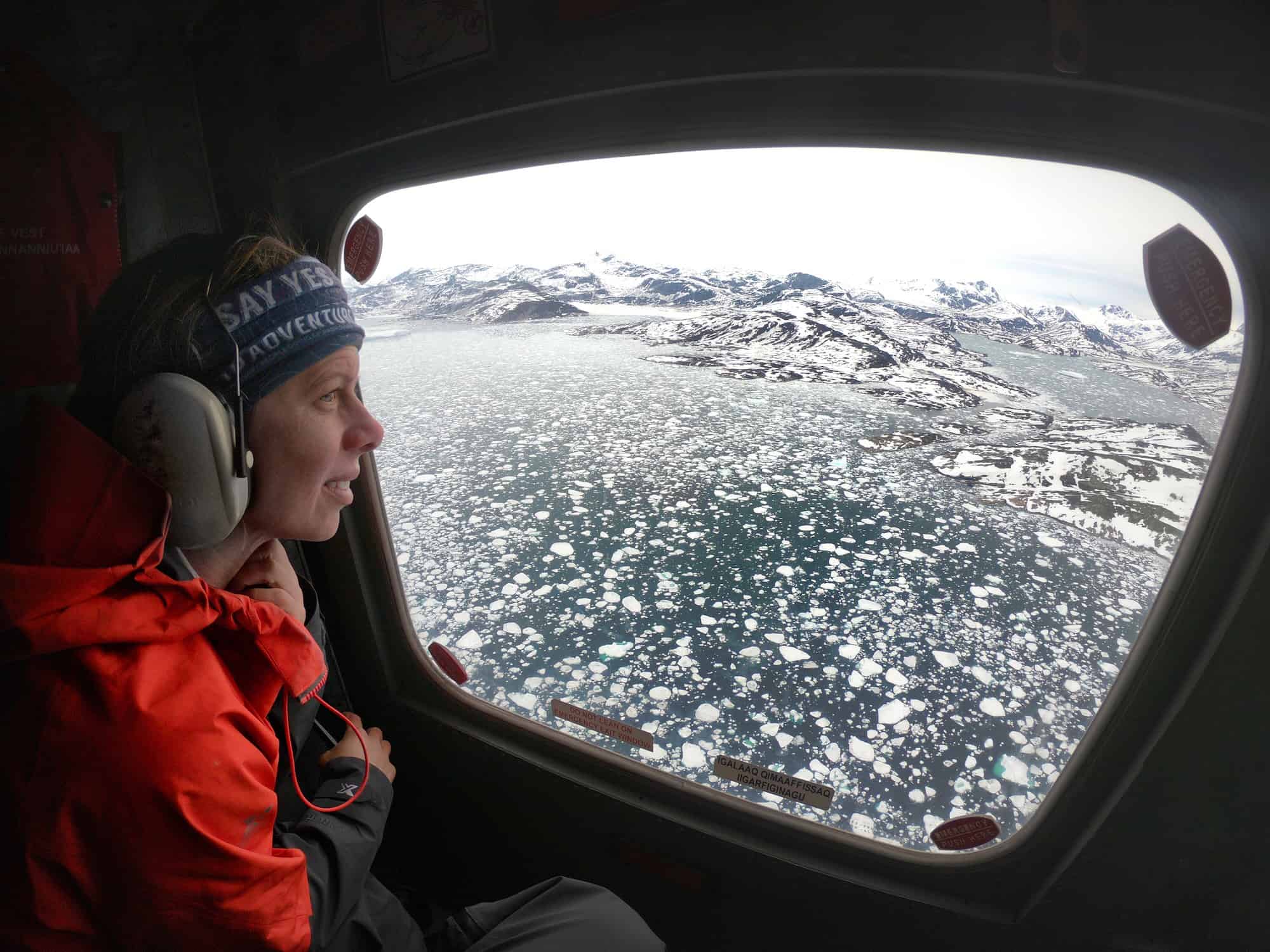 Frostbite on my butt in a hurricane

I don’t know what was more surprising – the frostbite or the hurricane!

Having been hunkered down inside our smelly tent for almost 24 hours, the time came when the body could take it no more – I needed to go to the bathroom! Tackling the hurricane with someone else made it slightly less daunting, so Bridget and I headed out together to hide behind the wall that we’d built to protect our tents. Minimum skin exposure to the environment is absolutely key in these situations, obviously.

As I pulled down my pants and felt the only loo paper I had with me escape my hand and disappear into the abyss, I could only laugh at the ridiculousness of the situation which I found myself in!

I would later discover that even 20 seconds exposure in 100+ kilometre winds and temperatures that hovered around the mid -20’s was too long. I could now add ‘Frostbite on my ass in a Hurricane’ to my resume. 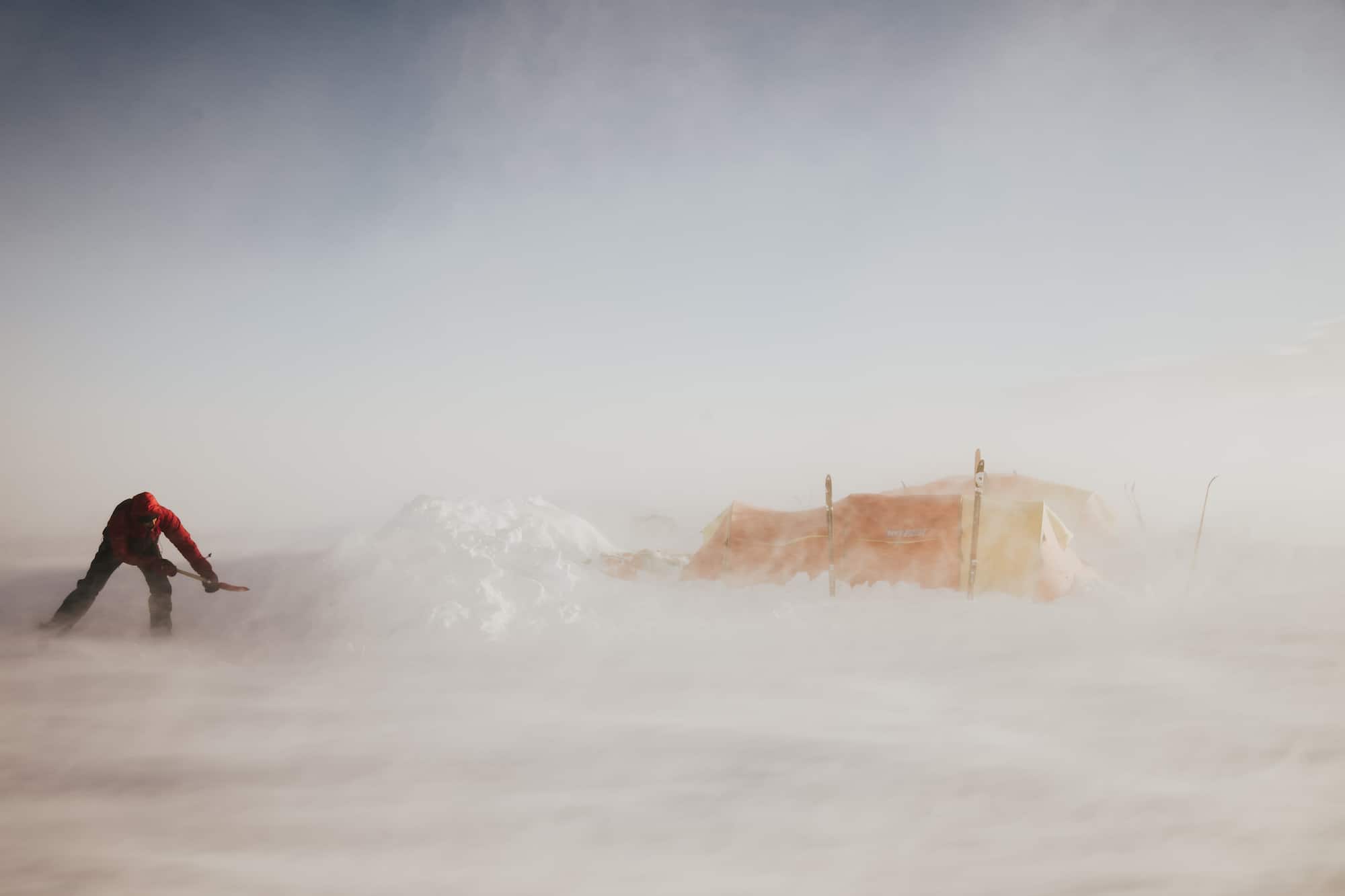 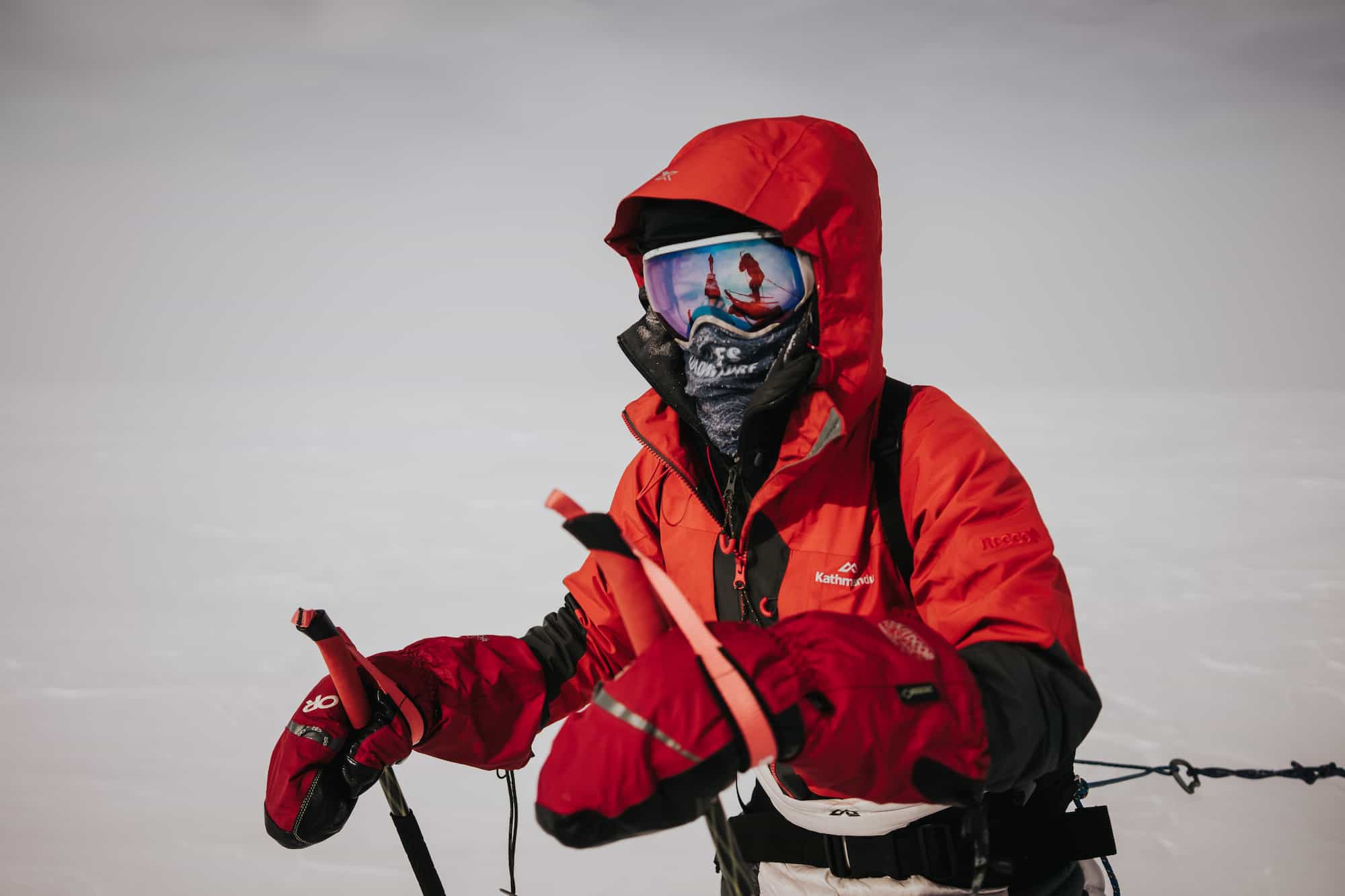 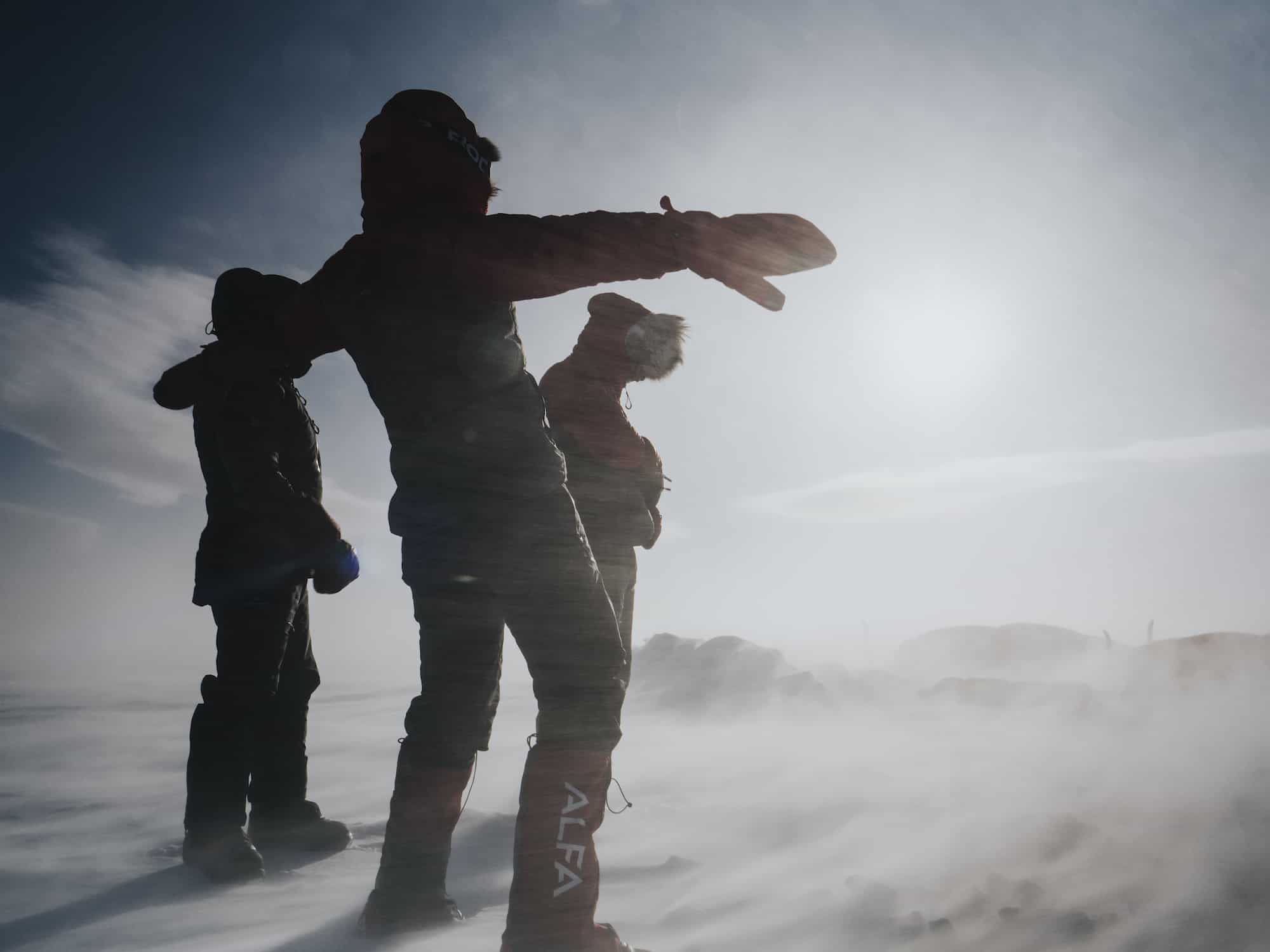 Snow halo’s and rainbows are magical

Greenland was a country that I’d never really considered as somewhere I wanted to go. Or any polar regions to be honest.

I’m more of a summer girl at heart. So, while I was devouring as much chocolate as possible, without any judgement (which was bliss) while on one of our many daily 10-minute rest breaks, Brando excitedly leapt up and pointed at the sky. Squinting, it took my eyes a second to adjust, “What the heck was that??”

Apparently, it was a Snow Halo, and I was fortunate to be witnessing one. Very rare to observe in nature, these phenomena are produced by sunlight interacting with ice crystals suspended in the atmosphere.

While no one person will witness the same halo, it was a magical experience that left me with goosebumps. 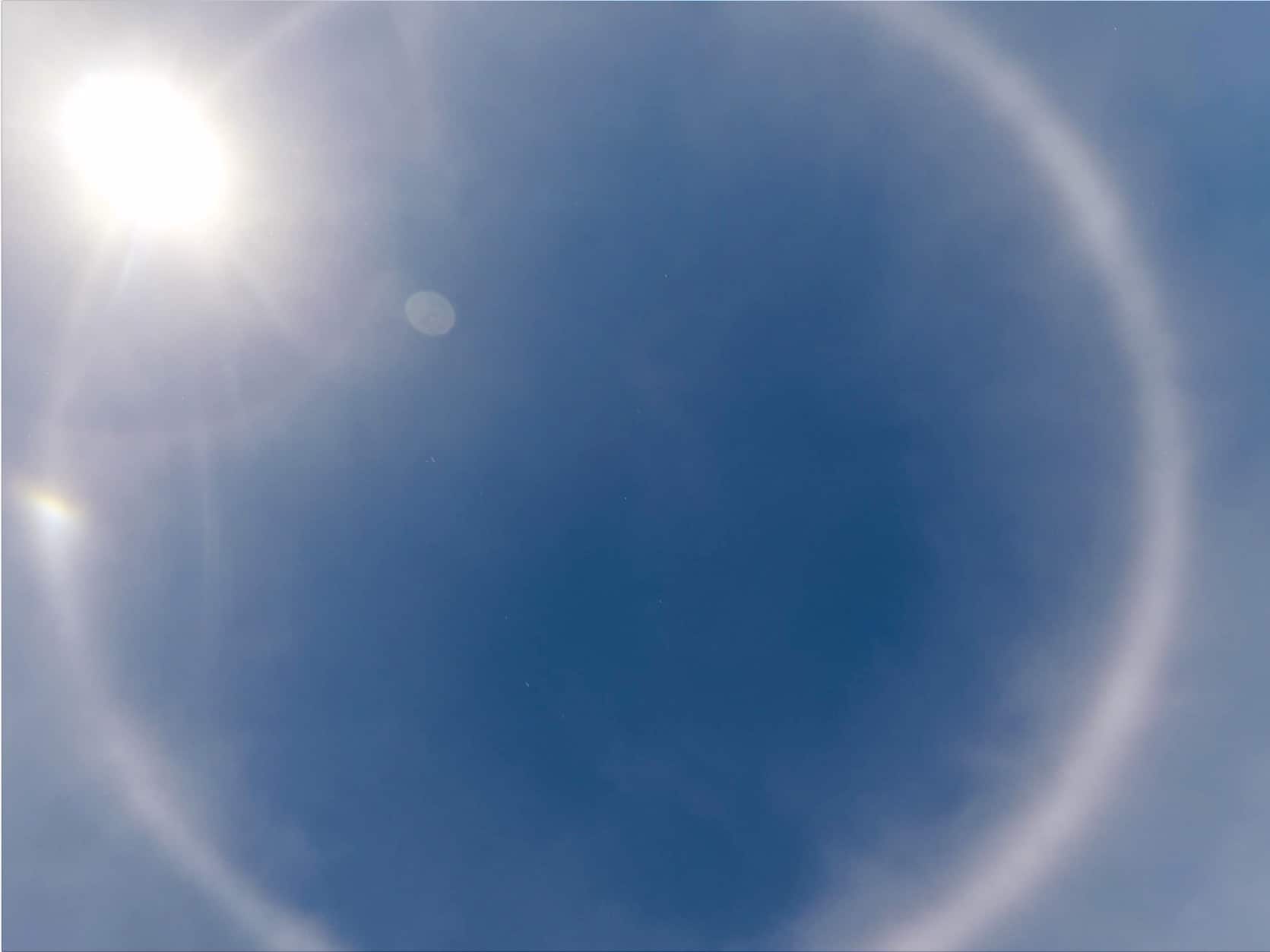 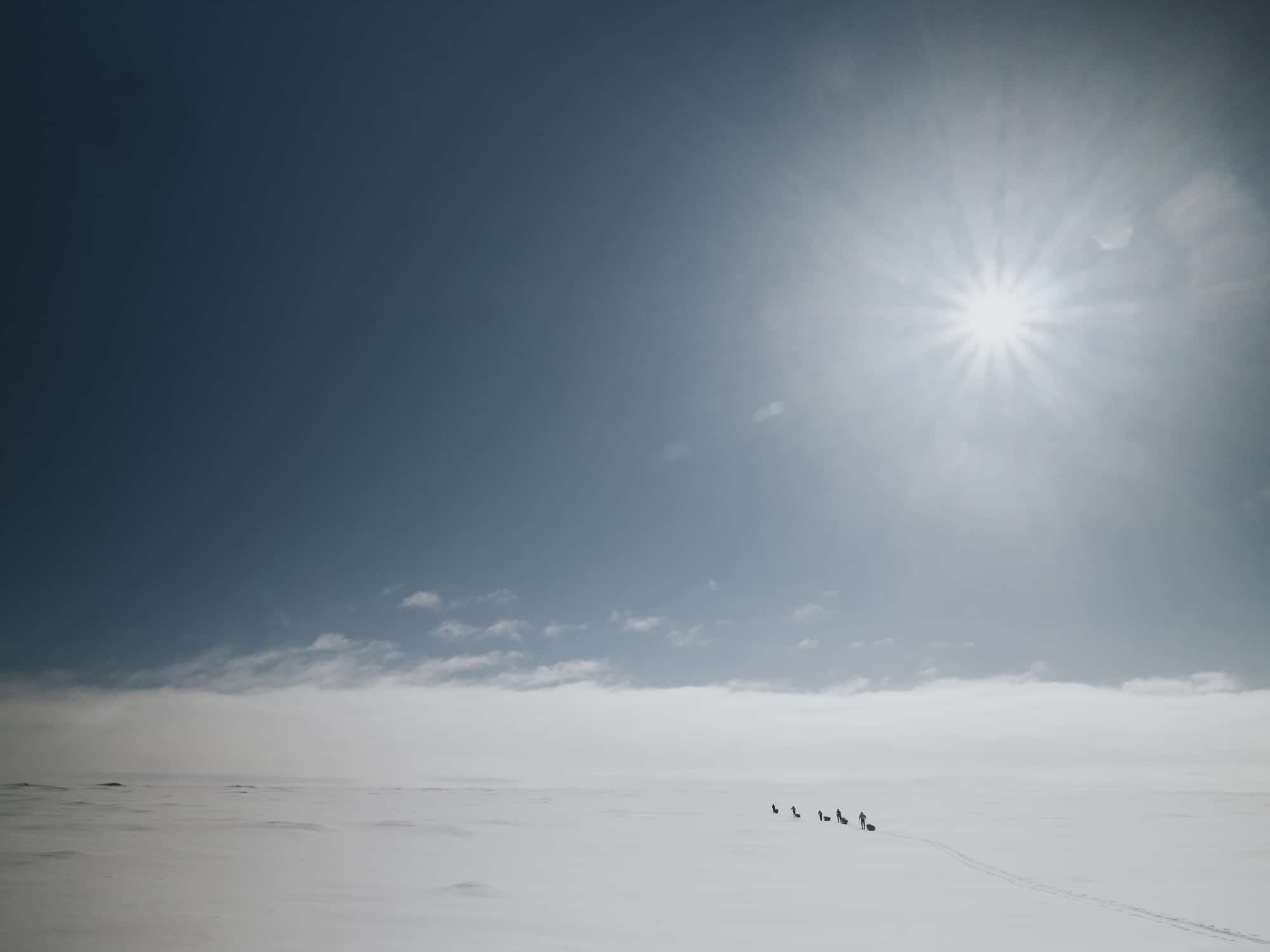 I devoured blocks of pure butter

With our pulkas (sleds) packed to the brim with all the equipment and food needed to survive in one of the most uninhabitable climates on the planet, we loaded the bus and hit the road to begin the journey, but not before one final stop at the supermarket for extra food supplies.

It was here that our guide Bengt told us to grab at least three blocks of butter. Picking them up, all I could think about was the extra weight I would have to carry. I never thought I would be in a situation where I would voluntarily eat three blocks of pure butter. Wrong. So wrong.

On any endurance expedition like this, your body is constantly burning energy, requiring an incredibly high-calorie diet to provide the energy it needs to keep going. It’s not often you get to eat as much as you want!

Roll on 25+ days, with what appeared to be more kilometres to cover than time would allow, and my body was using every ounce of calories that I could give it and then some. Chopping slices of butter right off the block, I ate it straight, on my crackers and topped up my dehydrated meals. The hardest part seemed to be rationing it!

While it was tasteless due to the freezing temperature, I made a pact with myself – if I were ever to do this again, I would pack more blocks of butter. 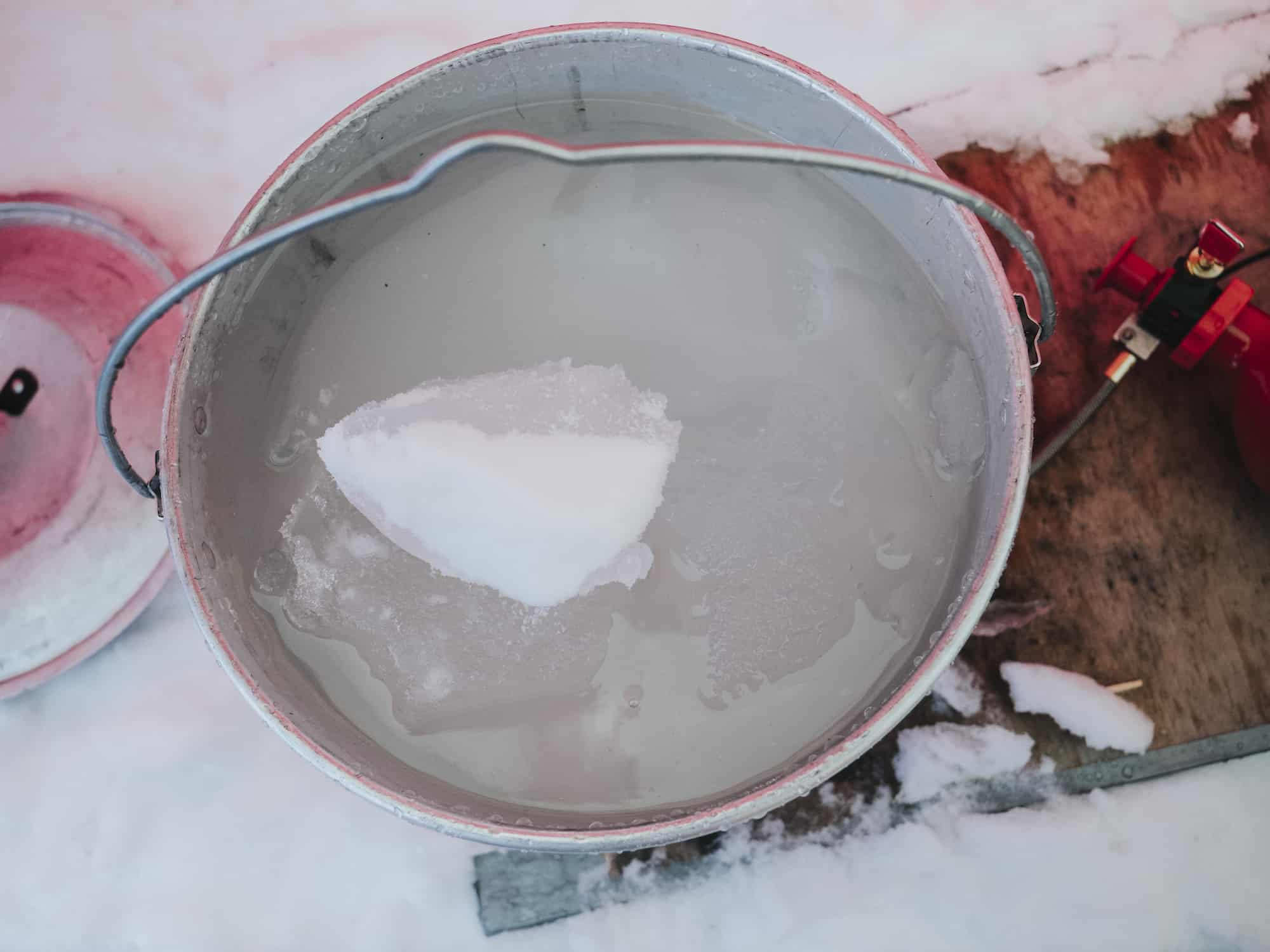 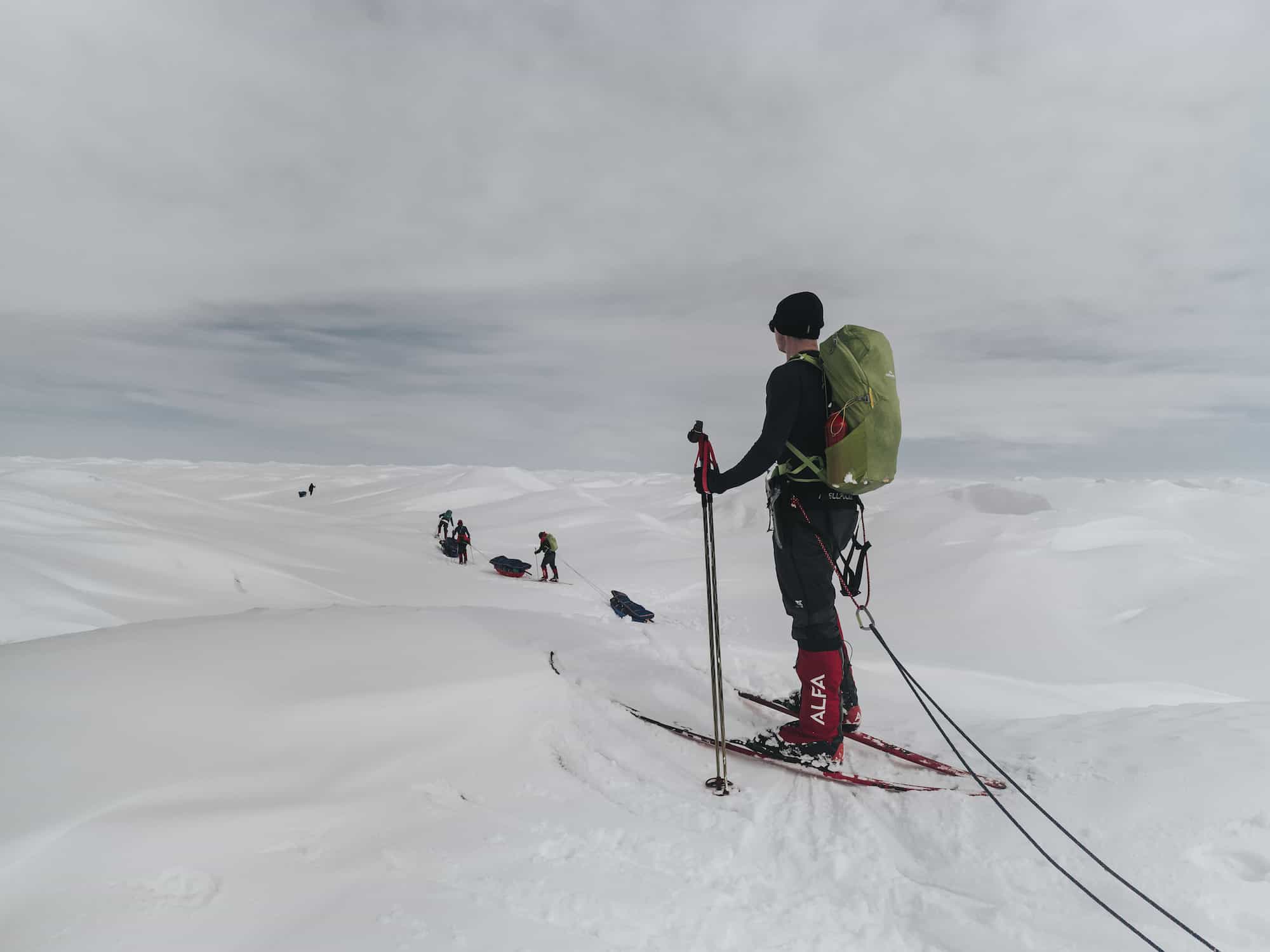 The physical toll on my body

I’m vertically challenged by anyone’s standards (coming in at a whopping five foot), so it’s no surprise that how my body would cope physically was what made me most nervous as we headed into the expedition.

While I’m aware that these challenges are 95% mental, 5% physical – that 5% pushed me to my limit many, many times. Catching a cold on the plane on my way over certainly didn’t help, nor did the fact that my sledge I was pulling behind me was heavier than I was (it was 60kg, I was 54.5kg when I left NZ shores and 47 flat when I finished). Combined with an uneven surface and having never done Nordic skiing before (crikey, even as I write this I question my sanity!) let alone in a place like Greenland, I was entirely outside my comfort zone. 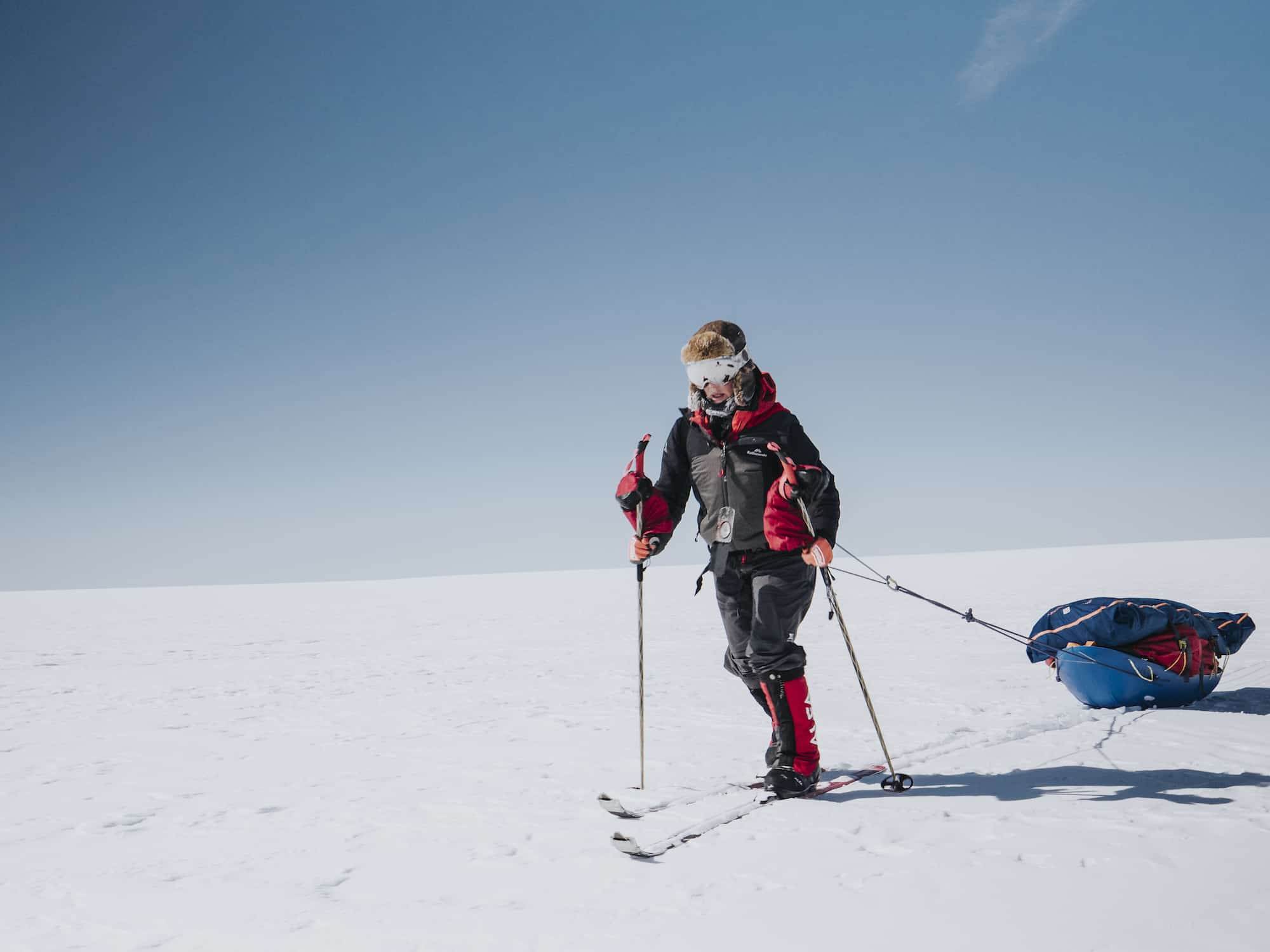 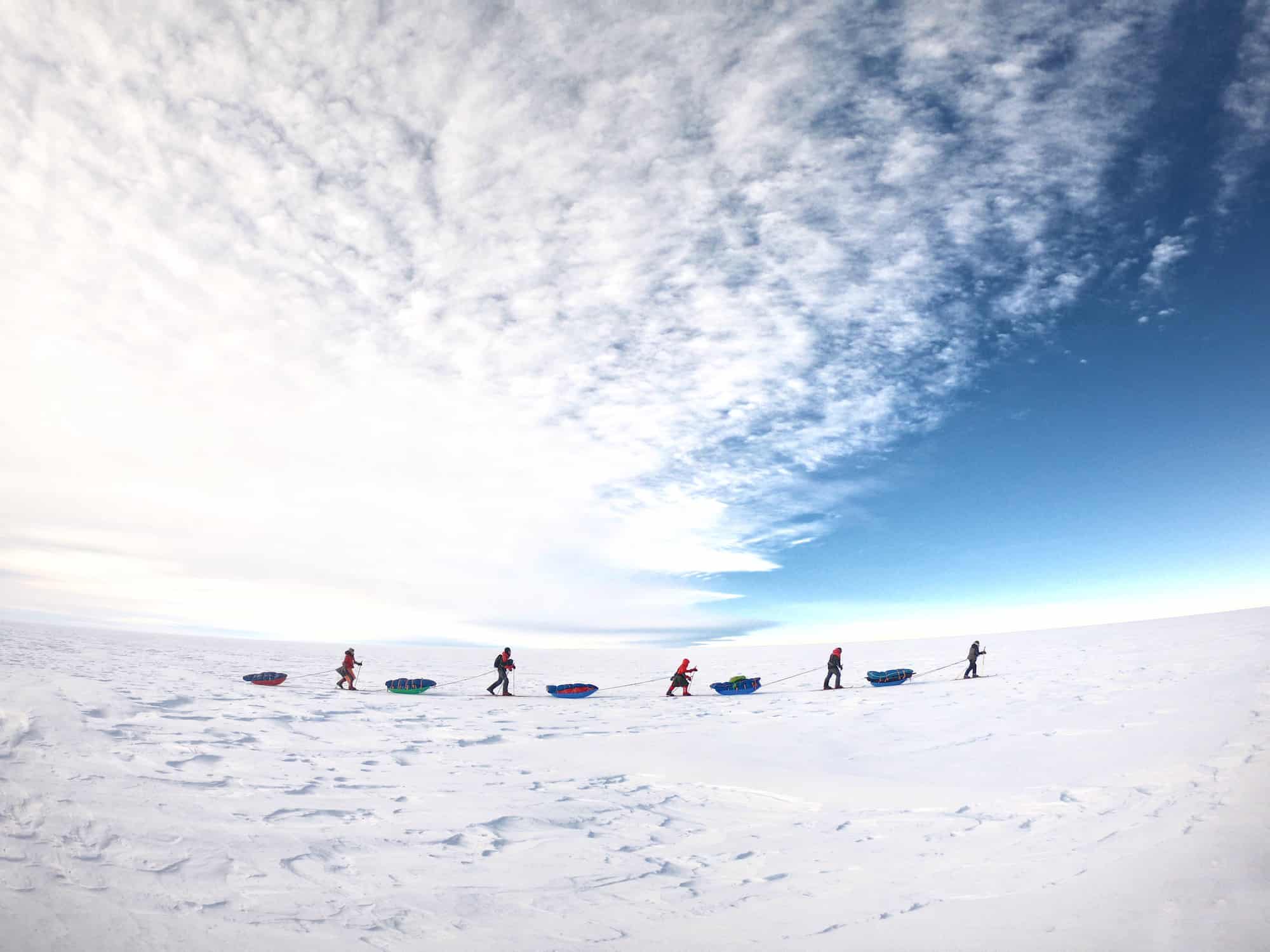 Two weeks in I could feel the space between my body and clothing increasing, and by the time we got to the end, I knew I was definitely lighter than when I started. But the shock of seeing myself in the mirror for the first time is something I will never forget.

Already emotional, I almost burst into tears. I was a stranger in my own body; the physical toll the expedition took on my body was immense. While the only plus was being able to fit into my ‘skinny’ clothes, six weeks on I am back to ‘normal’ and appreciate my strong, healthy body like never before.

Nansen was so badass

I’m no history buff, so from when I first heard about this expedition I had to turn to Google to bring me up to speed on who Fridtjof Nansen was. As it turned out, he’s a goddamn legend.

A Norwegian explorer, scientist, oceanographer, statesman, diplomat and humanitarian, he led the team that made the first crossing of the Greenland interior in 1888, as well as several expeditions to the Arctic (1888, 1893-96) and oceanographic expeditions in the North Atlantic (1900, 1910-14). For his relief work after World War I, he received the Nobel Prize for Peace (1922).

Following in the wake of Shackleton to South Georgia

As we traversed the icecap we had everything we needed from top-of-the-range gear from Kathmandu, outside communication via a satellite phone and high-quality food, we often commented that the explorers that came before us were incredible (and totally nuts!).

They had no idea when to shelter from the storms, what the terrain was going to be like, or if they would even make it across. I had so much respect for these guys and was thankful I was part of this expedition 130 years later. 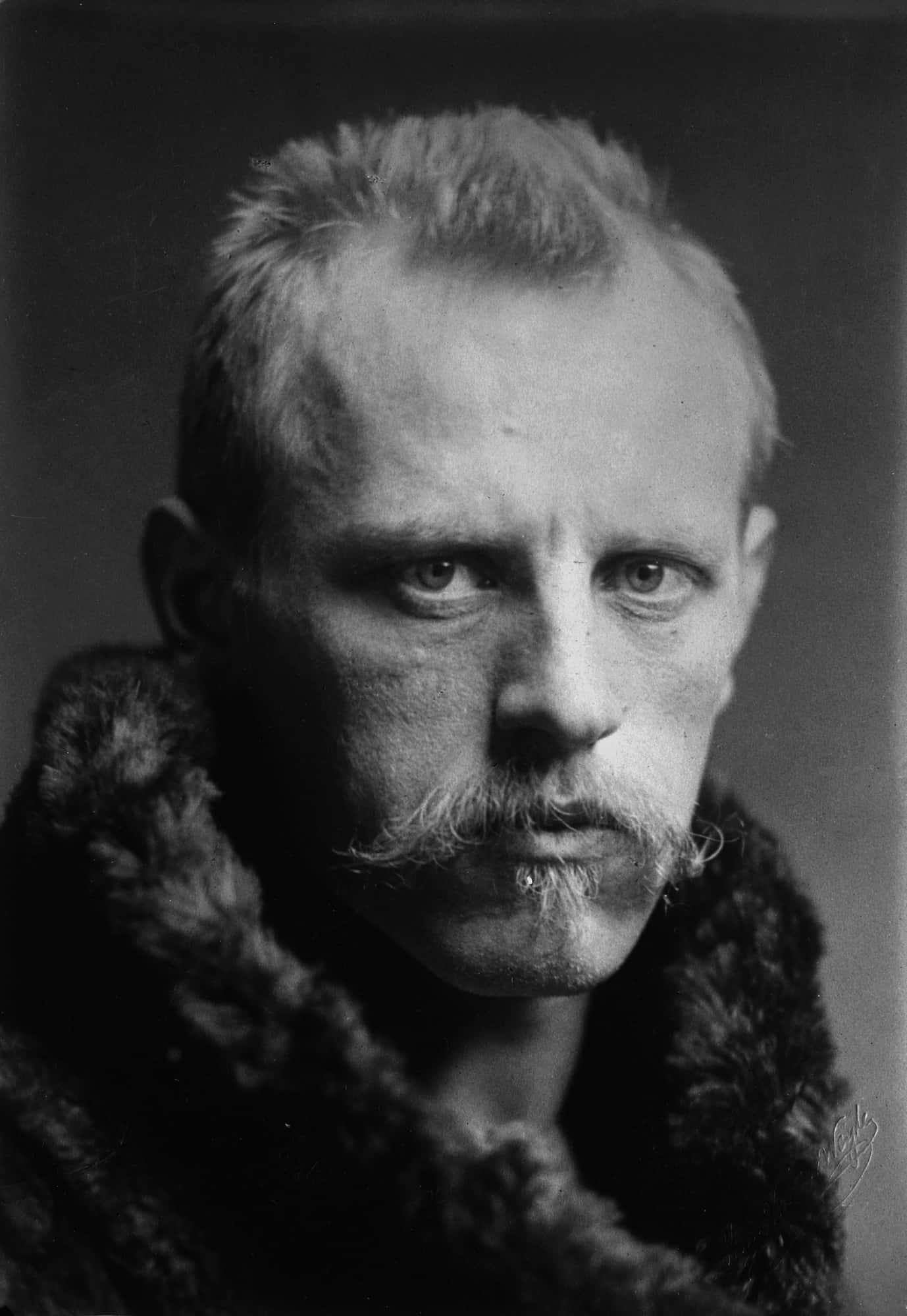 With more than two months now back in ‘normal’ life, I miss the monotony of Greenland.

There’s something therapeutic about the simplicity of life on the ice; the simple movement of walking, of thinking, of completing mundane tasks like putting up a tent and boiling water. For 29 days we had one goal – to get the other side. While mother nature threw everything at us, we ‘knocked the bastard off’.

Traversing Greenland with the AHT was an experience like no other. While it is still fresh in my mind, I have no doubt I will look back on our 29 days with immense pride. Not too many people can say they’ve crossed the Greenland Ice Cap.

For more information about the AHT Inspiring Explorers expedition, head to inspiringexplorers.com

Is this the kind of adventure you dream of? Would you have what it takes to take on a challenge like this? Share! 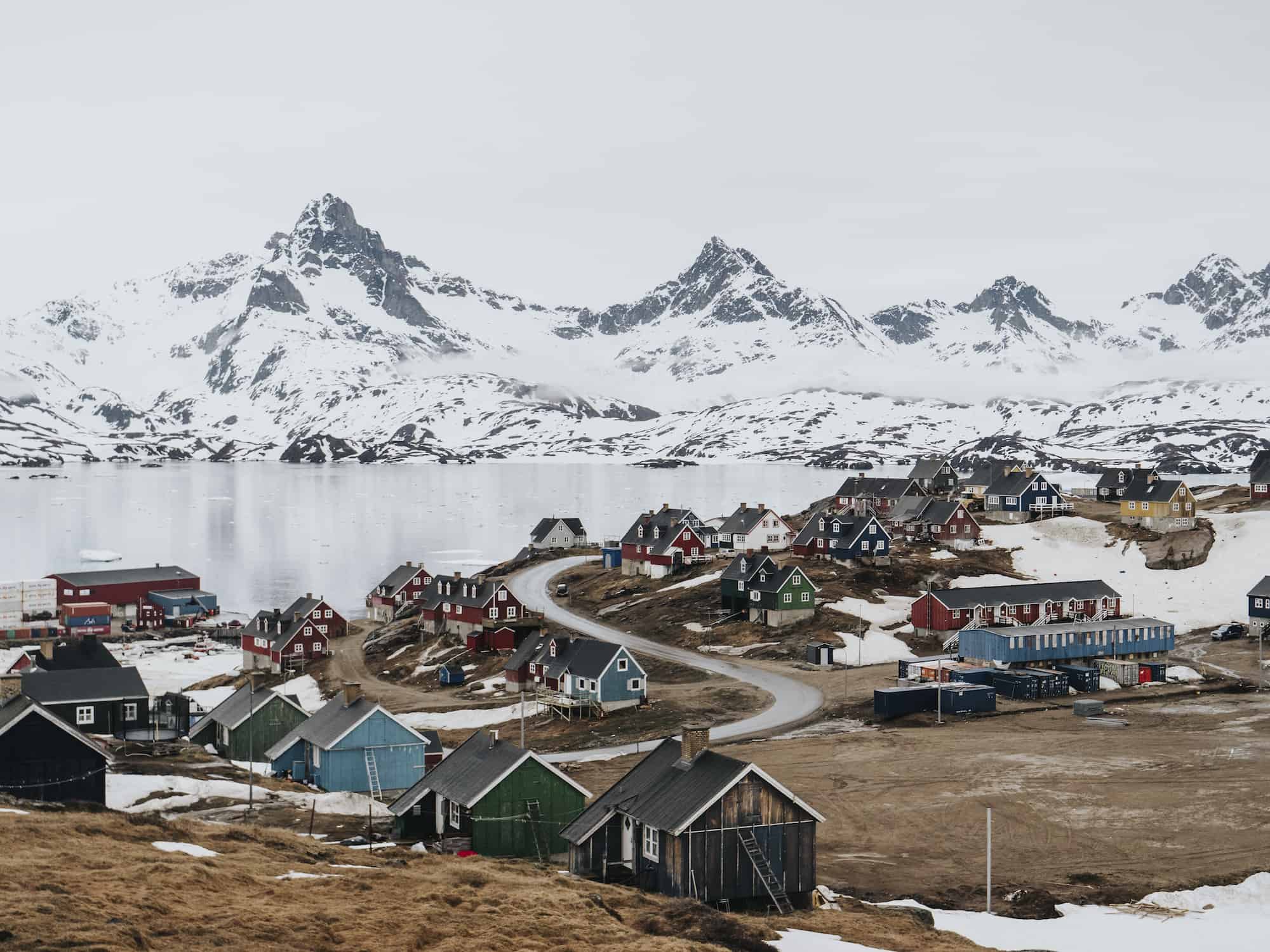 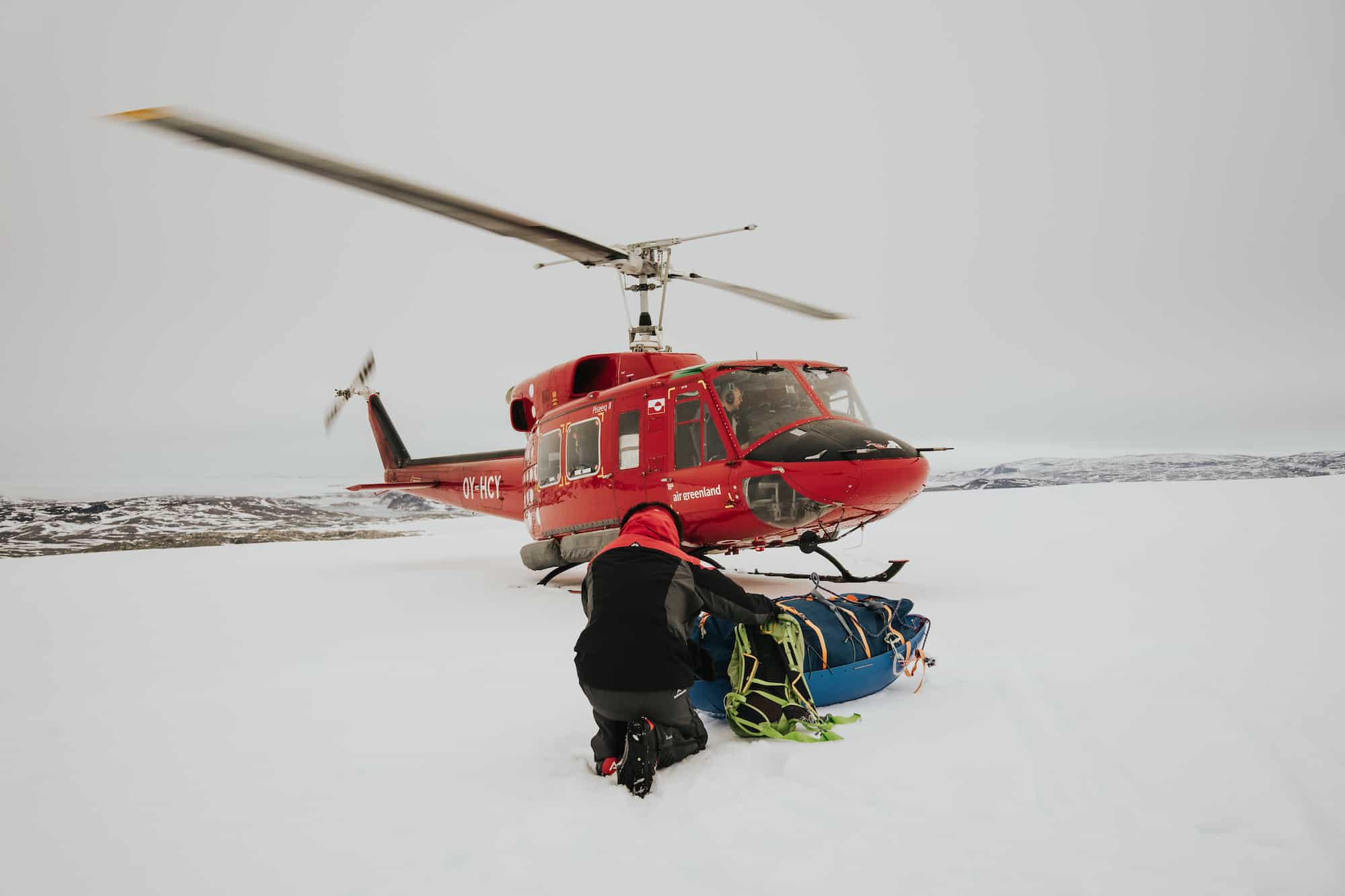 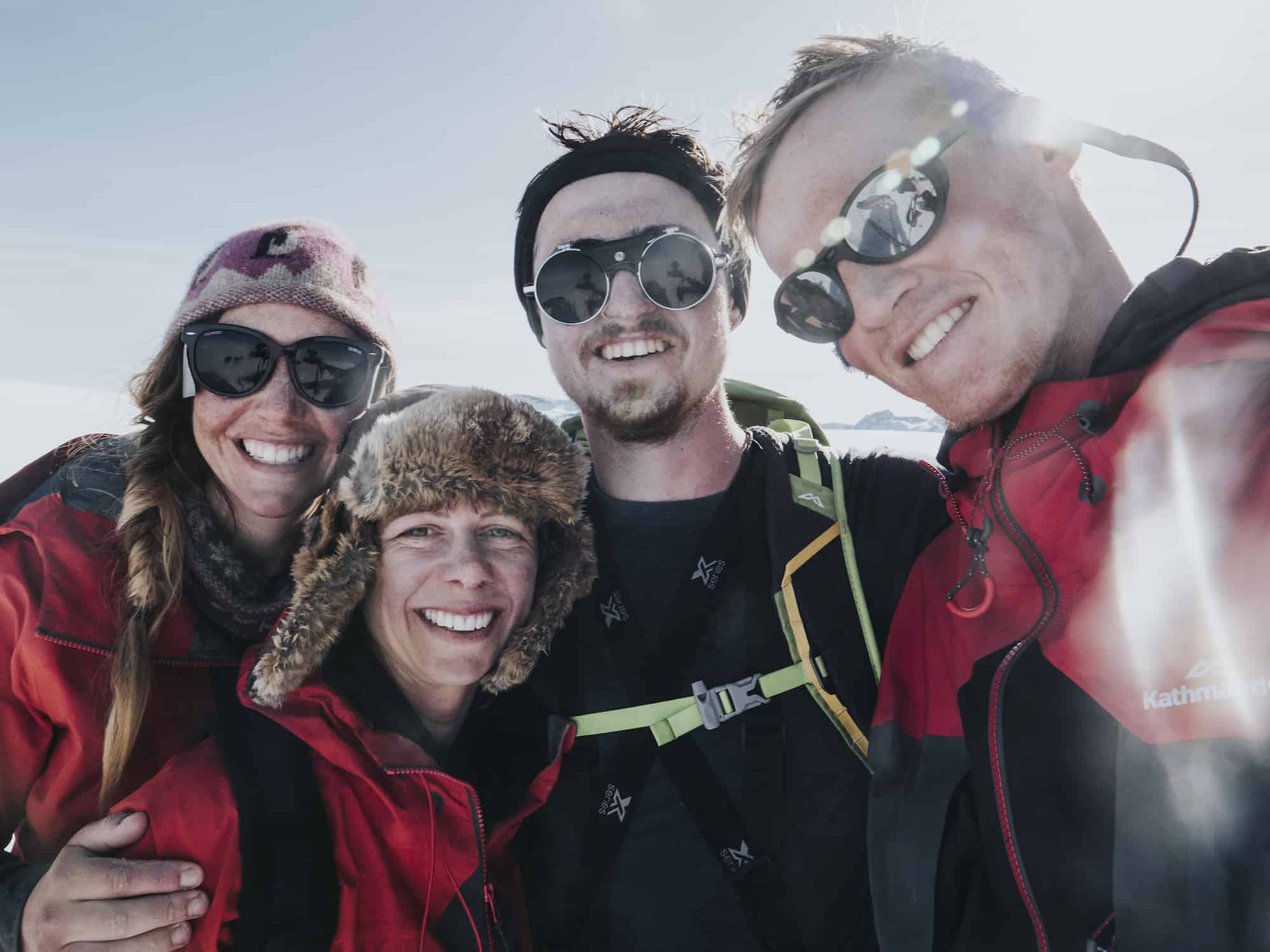 Written by Hollie Woodhouse and was published on August 9, 2018 in Adventures, Confessions, Destinations, Get Inspired, Greenland 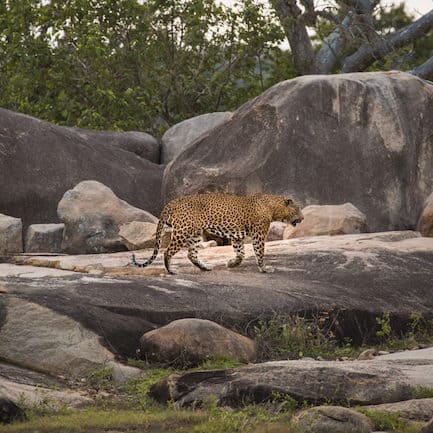 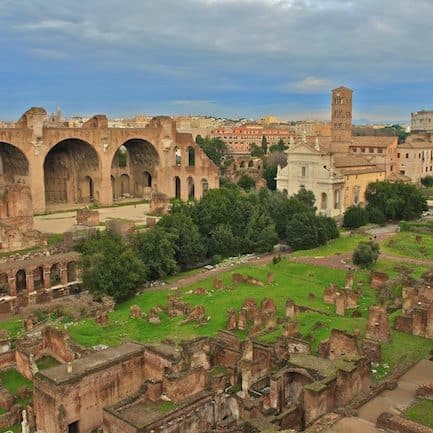 My 5 Craziest Moments in Italy

What happens in Italy, stays in Italy, right? NOPE! Not on this blog!…Read More 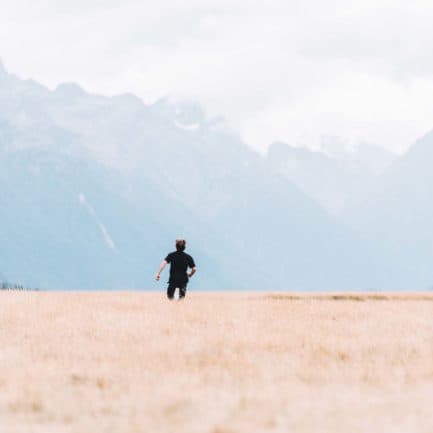