I have a confession to make: When I first moved to New Zealand, I wanted to go to Wanaka specifically for Roy’s Peak.

I had seen the photos on social media of the turquoise blue lake cradling the tiny mounds of islands, surrounded by towering 1000 meter peaks in every direction. It was a scene I had never seen before and I couldn’t wait to climb this mountain and see such a strange place, take in those epic views of Wanaka myself.

How could it be real? 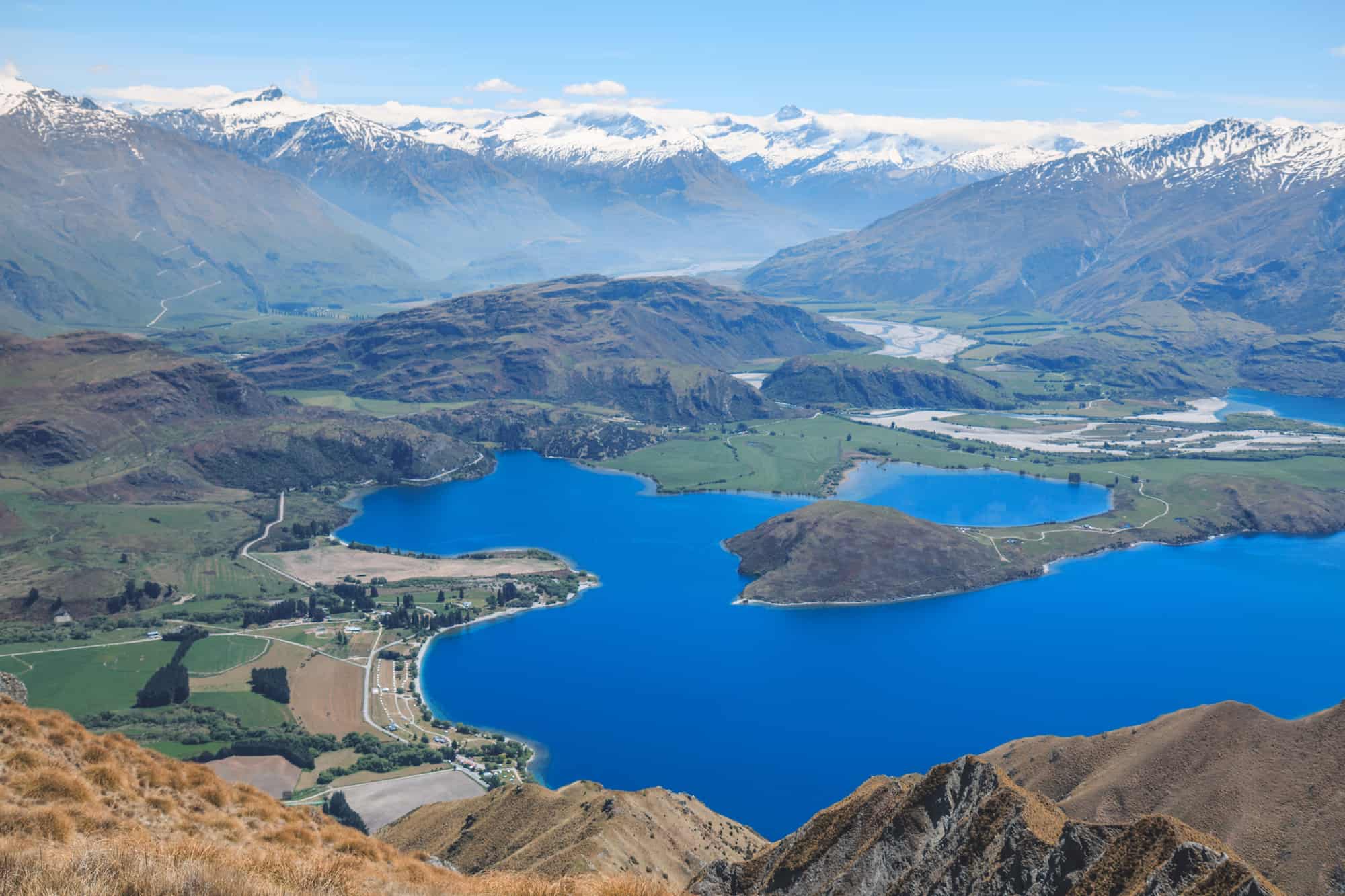 Of course what my naive self didn’t realize was that social media doesn’t show you the line of people walking up the track and the hordes of humans crowding the summit and to be quite frank, the exceedingly boring walk to the top. Sure, I was awestruck but I was also dismayed. I stupidly thought I’d have this quiet corner of the world to myself but I was surrounded by people who surely though the same.

I walked down the monotonous track for the first time, cursing myself for not realizing how busy it’d be and for not doing more research on lesser-known hikes.

Mt. Roy is probably the most popular hikes in New Zealand thanks to Instagram, with hundreds of thousands of people walking up it annually, and lines up to 40 minutes to take “that photo.” You aren’t going to have that walk to yourself, rain or shine, middle of the night or during the day. It’s crowded. 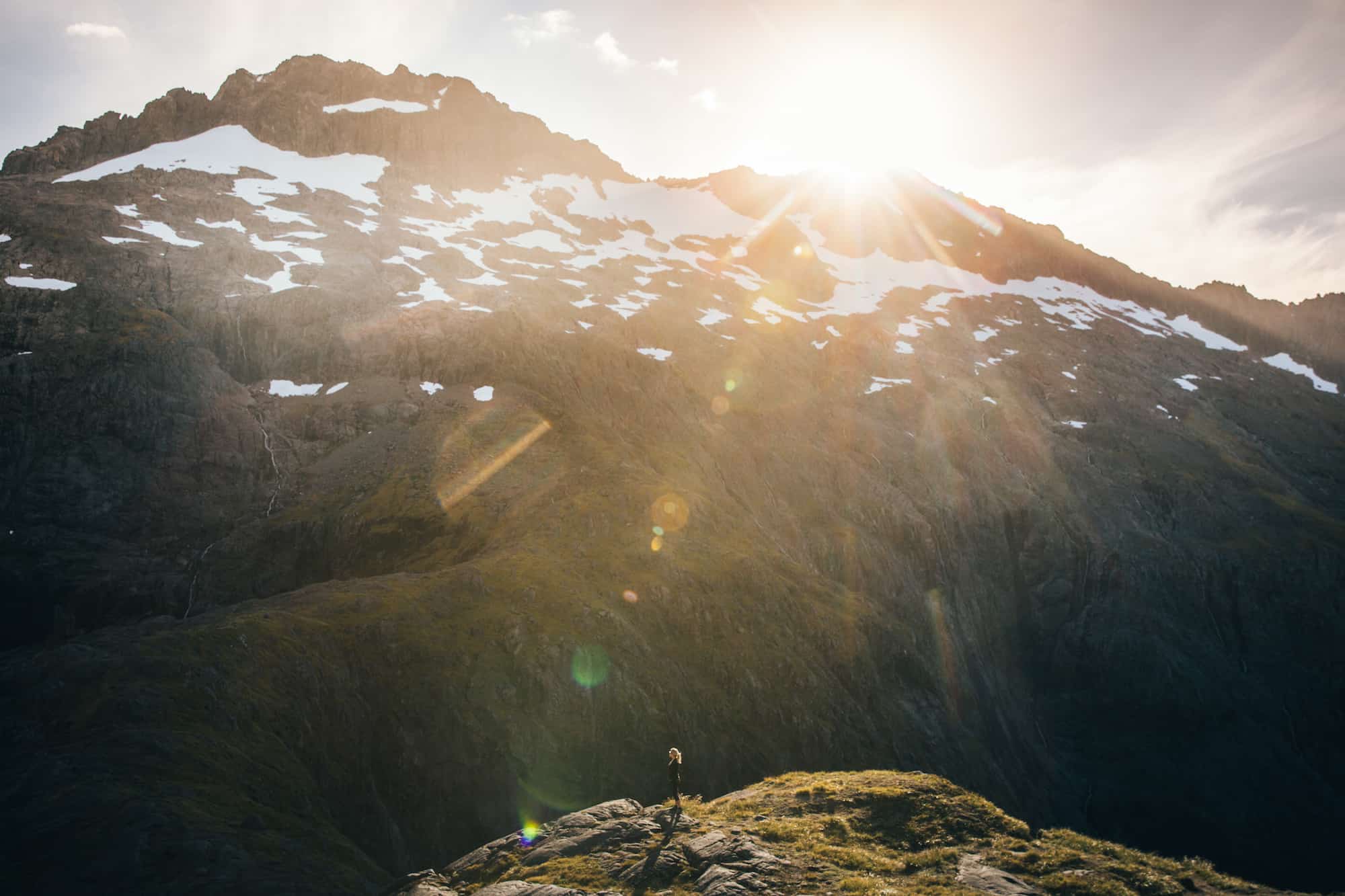 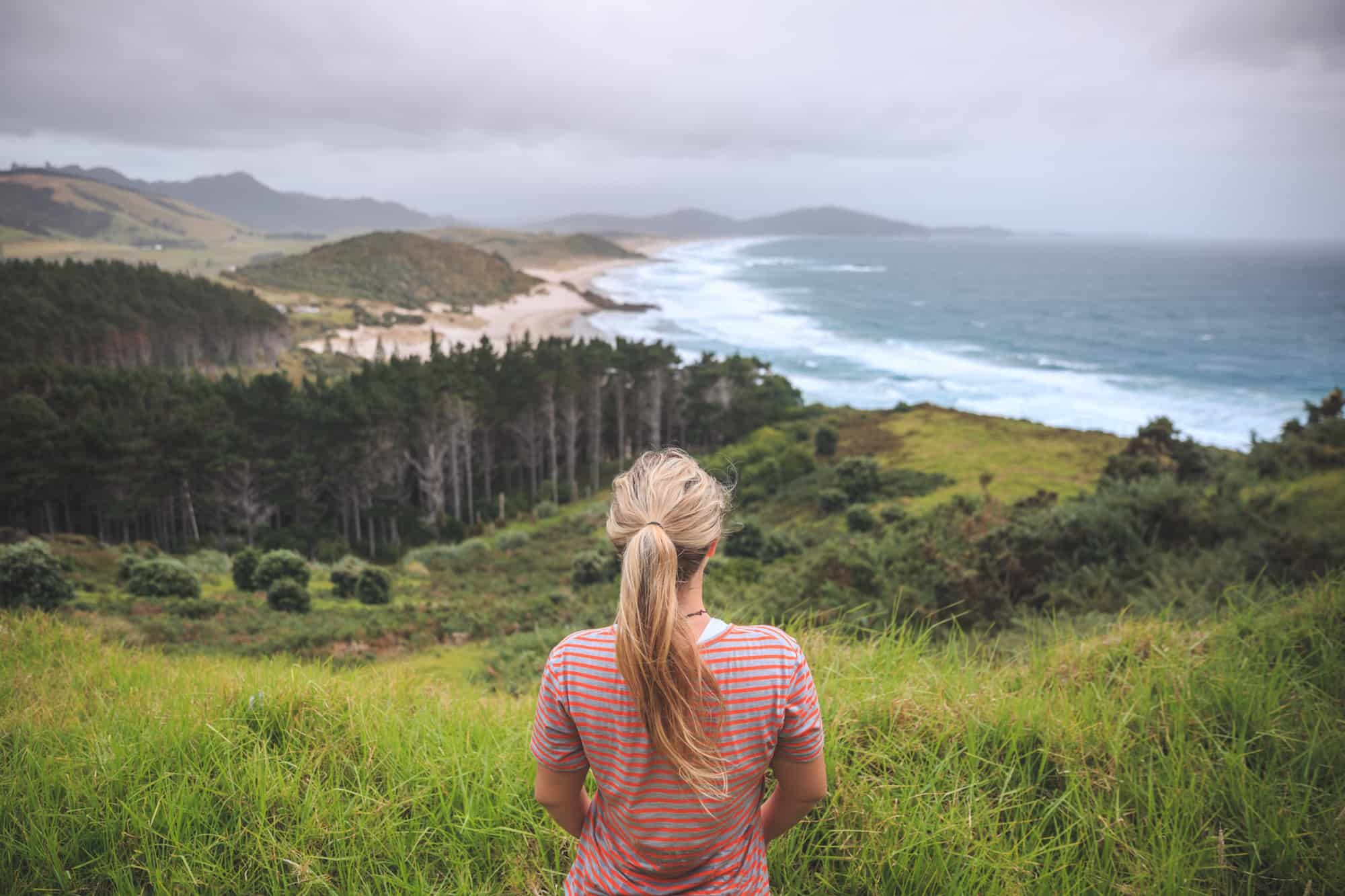 I get it, it’s hard when you’re traveling, especially when you’re hoping to do lots of hiking in New Zealand. You have so much planning to do already that you don’t really have time to look into all of the best secret spots, because duh, they’re secret for a reason!

But fear not! There are hundreds and hundreds of secret tracks in New Zealand that take a little bit more research but are certainly worth it.

If you’ve dreamed of quiet trails in the New Zealand wilderness, this list is for you. I can’t guarantee you’ll have them all to yourself but you certainly won’t have to line up to take a photo.

These are my top 10 epic hikes that are way better than Roy’s Peak. Enjoy!

9 ways hiking in New Zealand will change your life

*Be sure to check out the Mountain Safety Council’s handy website for helping plan a safe adventure in the New Zealand backcountry, especially how to plan your trip.

For the history buffs and the coastal lovers, this one is for you! Located in the Tolaga Bay area on the east coast of the North Island, Cooks Cove Walkway takes you nowhere Captain James Cook stopped in 1769 as part of his circumnavigation of New Zealand.

For a relatively easy walk with minimal hill walking, you’ll be rewarded with stunning views of coastal bluffs and gives first views of Cooks Cove itself. Information panels alone the way tell the story of Cook and the crew of the Endeavor’s visit to the Cooks Cove (Opoutama), the history of the local iwi Te Aitanga-a-Hauiti, and the excavation of an archaeological site first occupied by Māori.

For those warm summer days, you’ll even spot a safe cove to swim in. If you’re planning on doing this track, be aware the track is closed from August 1st – late October. 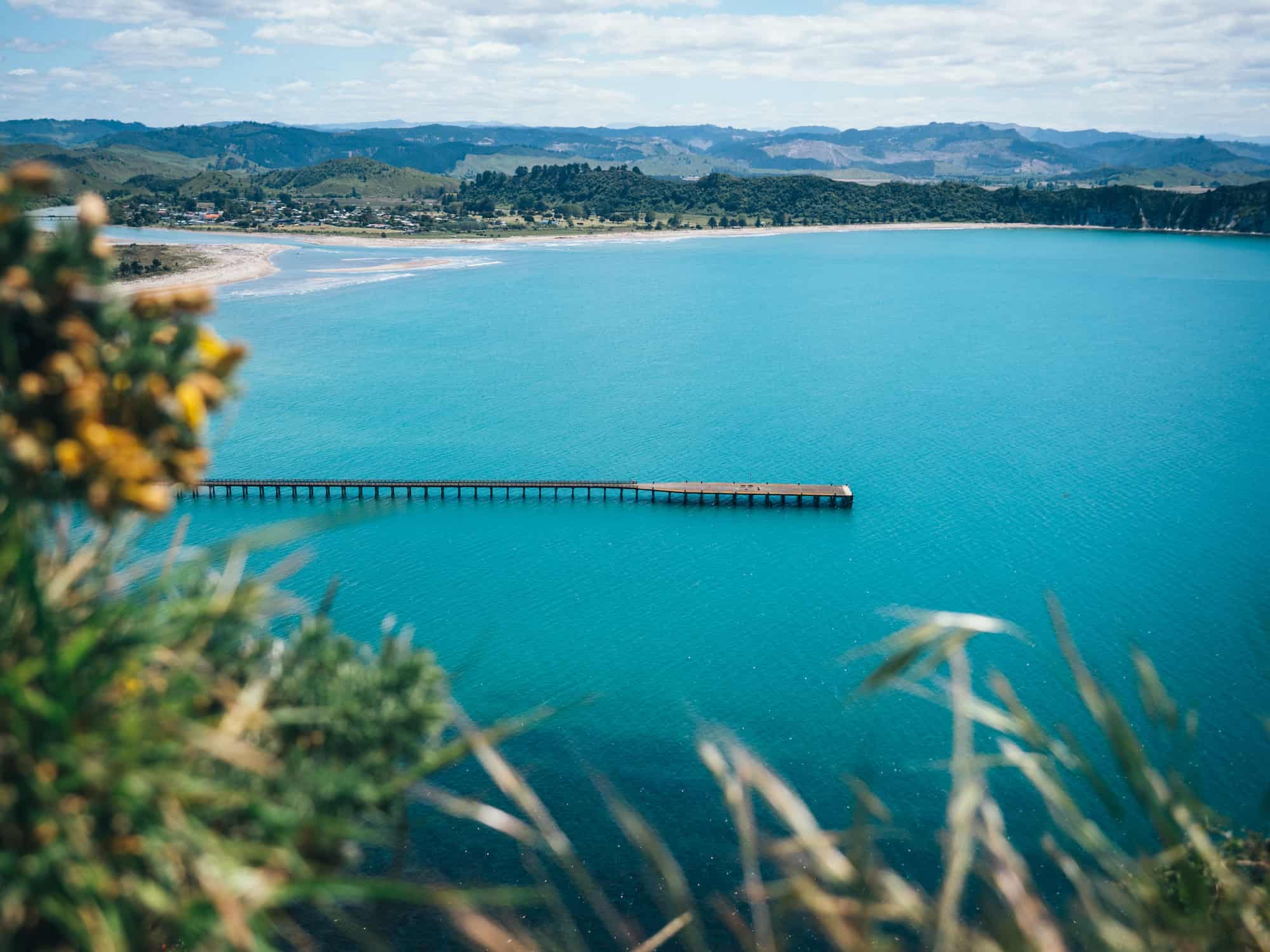 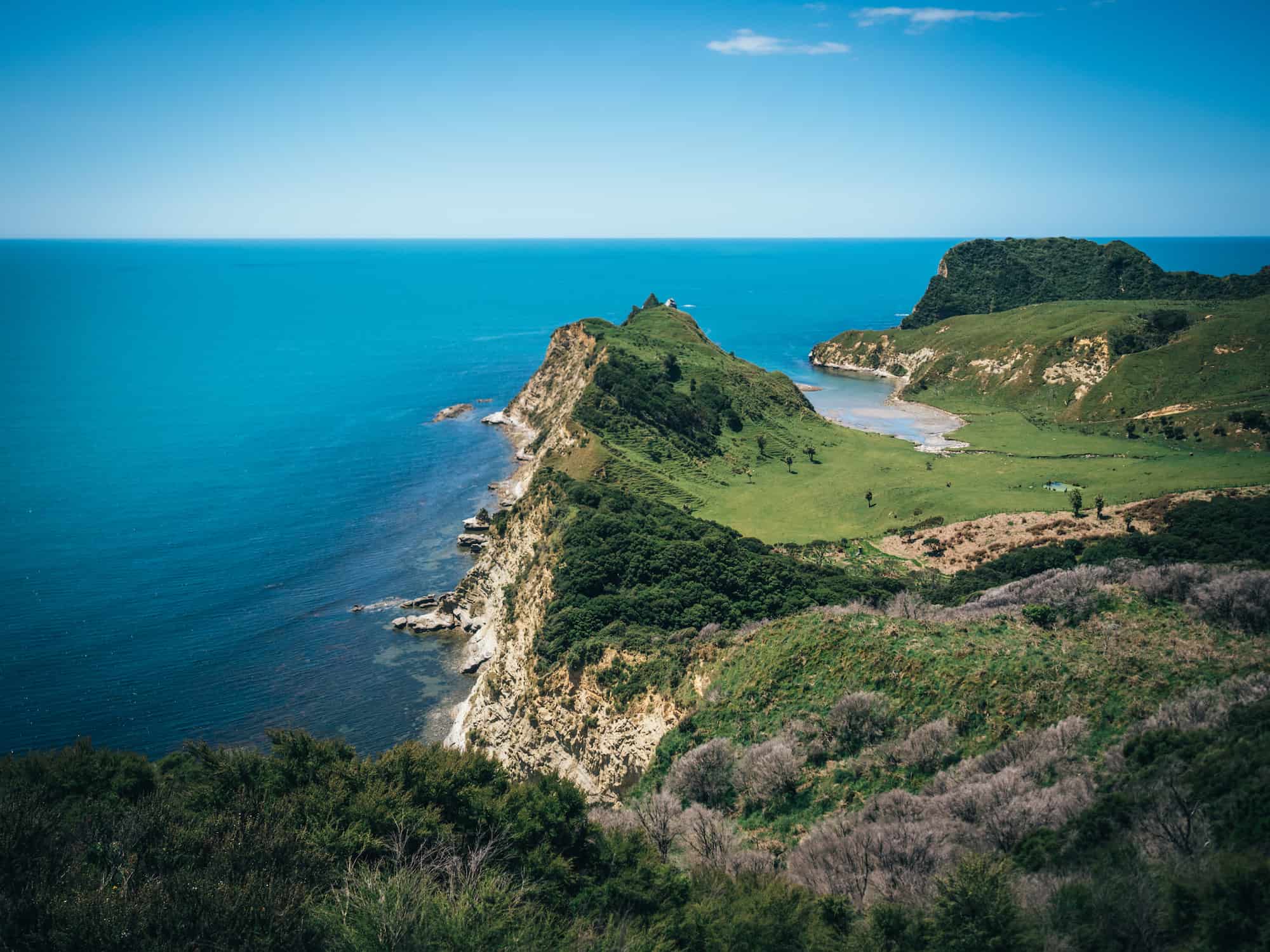 Another east coast gem, the track to Paneikire Hut is one that can’t be missed. Found on the multi-day track around Lake Waikaremoana (Te Urewera), one of New Zealand’s Great Walks, this hike can easily be done in a day. It’s a strenuous climb up to Paneikire Bluffs but once at the bluffs, the track mellows out and follows an undulating ridgeline before reaching Puketapu Trig and onto Panekire Hut.

In pre-European times, life was determined by the practical demands of an annual cycle of food gathering. Te Urewera nurtured an industrious and resilient people with links to the land. No part of the forest was left unexplored. Hine-pukohu-rangi came from the sky enticing Te Maunga, the mountain, to earth with her. Their child was a mortal being, Tuhoepotiki; his children are the Tuhoe people. Tuhoe are thus children of the supernatural, born of the remote mountain and the drifting mist.

The symbol you see on signs, shelters, and other facilities along the lake track is an interpretation of Hine-pukohu-rangi. 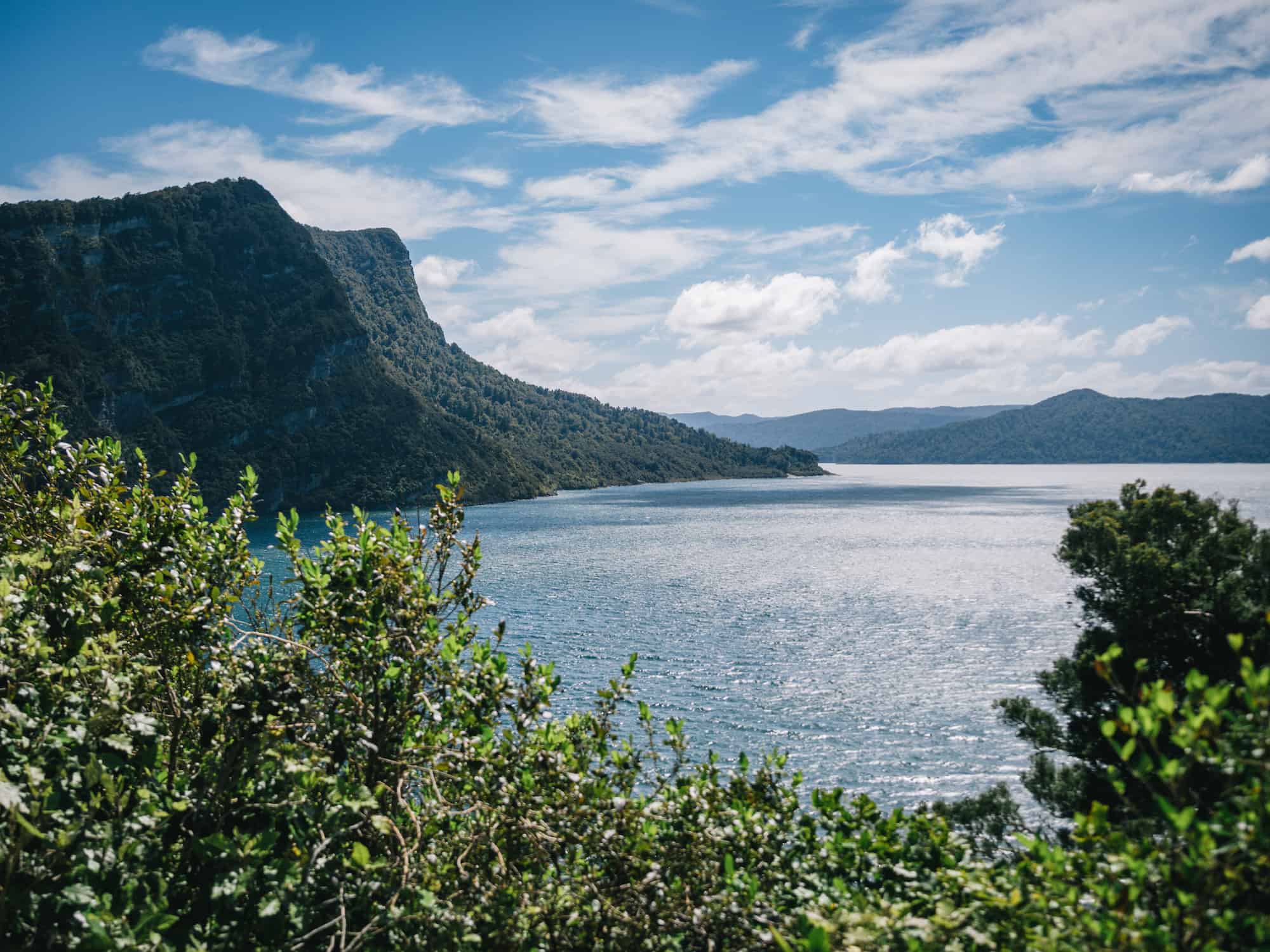 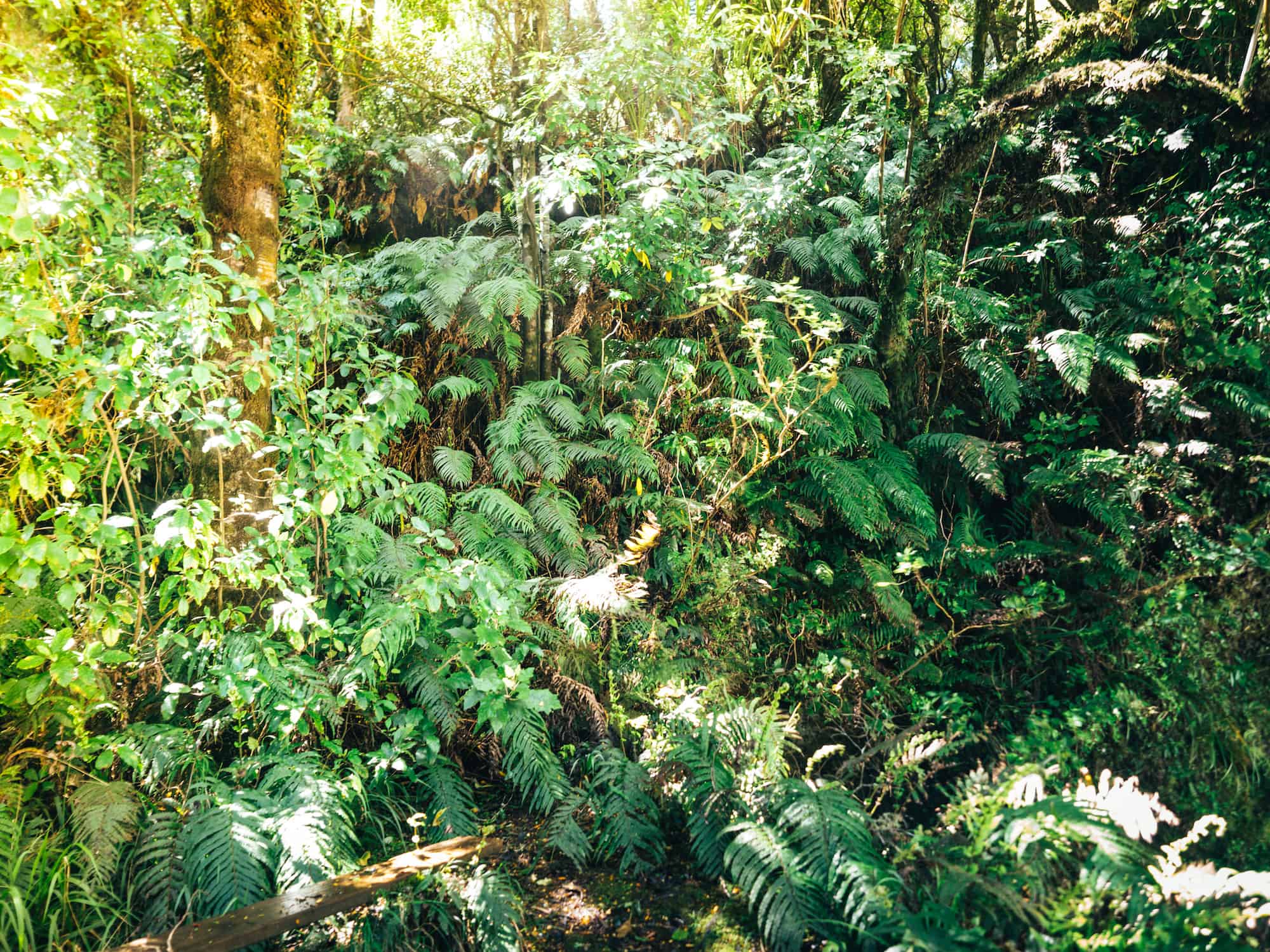 To be fair, this walk is classified as “popular” but compared to the cattle-like lines going up to Roy’s Peak, this hike is still relatively quiet. Found on the lush and dense Coromandel Peninsula, this hike can be done in a day or as an overnight walk. The track follows a historic packhorse route used by the kauri bushman in the 1920s.

The Pinnacles Track starts by climbing a series of steps that were cut into the rocks to make the journey for the bushmen easier as they were logging kauri trees. As you reach the top of the climb, you’ll see the skidded road which were used to pull logs along the skids by teams of bullocks or steam haulers.

As you reach the top of the climb, you’ll be rewarded with 360 views of the this beautiful North Island peninsula including views of a branch of the Tairua River and the rugged volcanic landforms of Tauranikau and the Pinnacles. A short walk down a signposted sidetrack leads you to Dancing Camp Campsite where you might find remains of the Dancing Camp Dma, built in 1921.

If you do plan to stay at the hut, please note bookings are required. 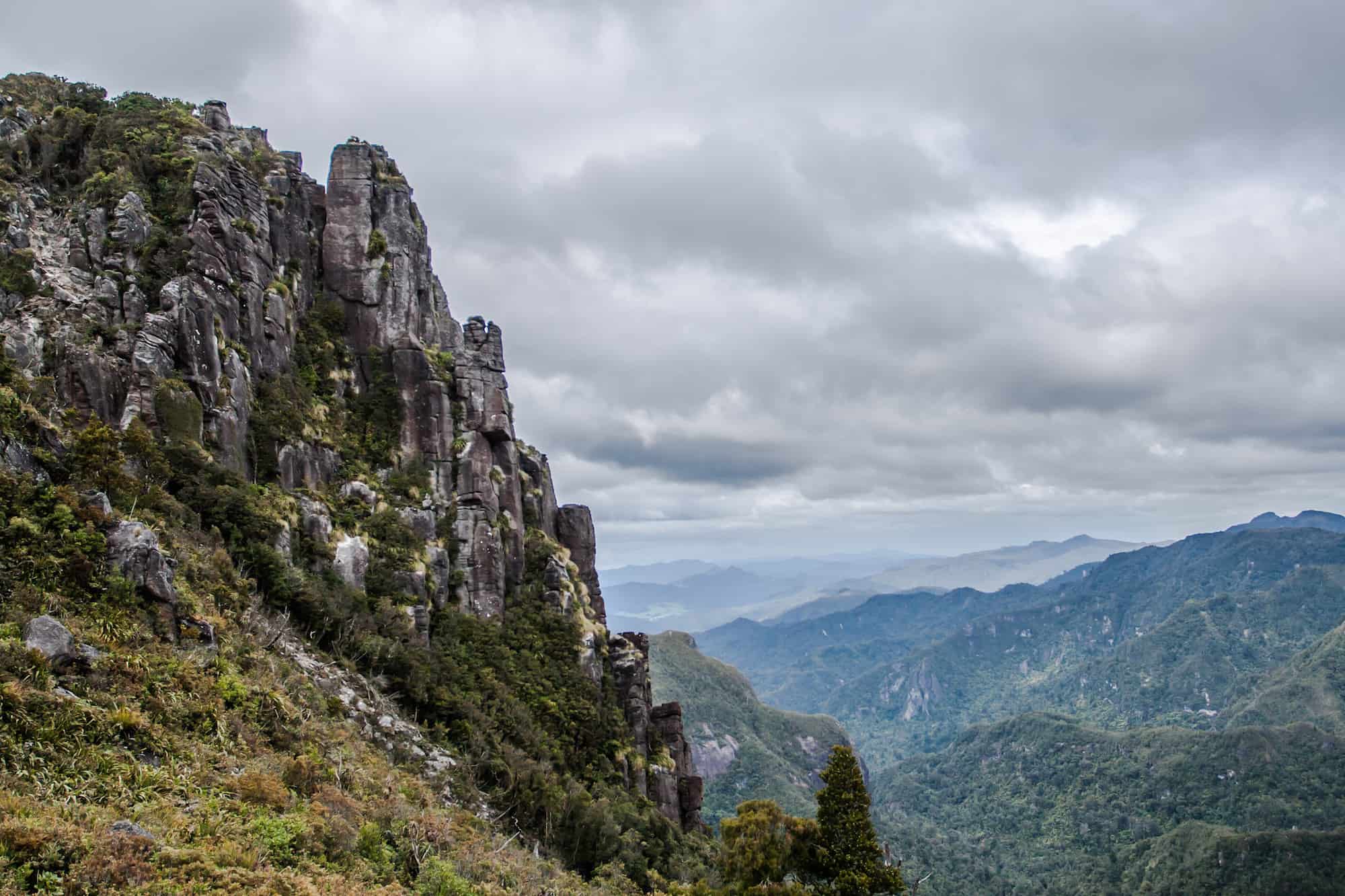 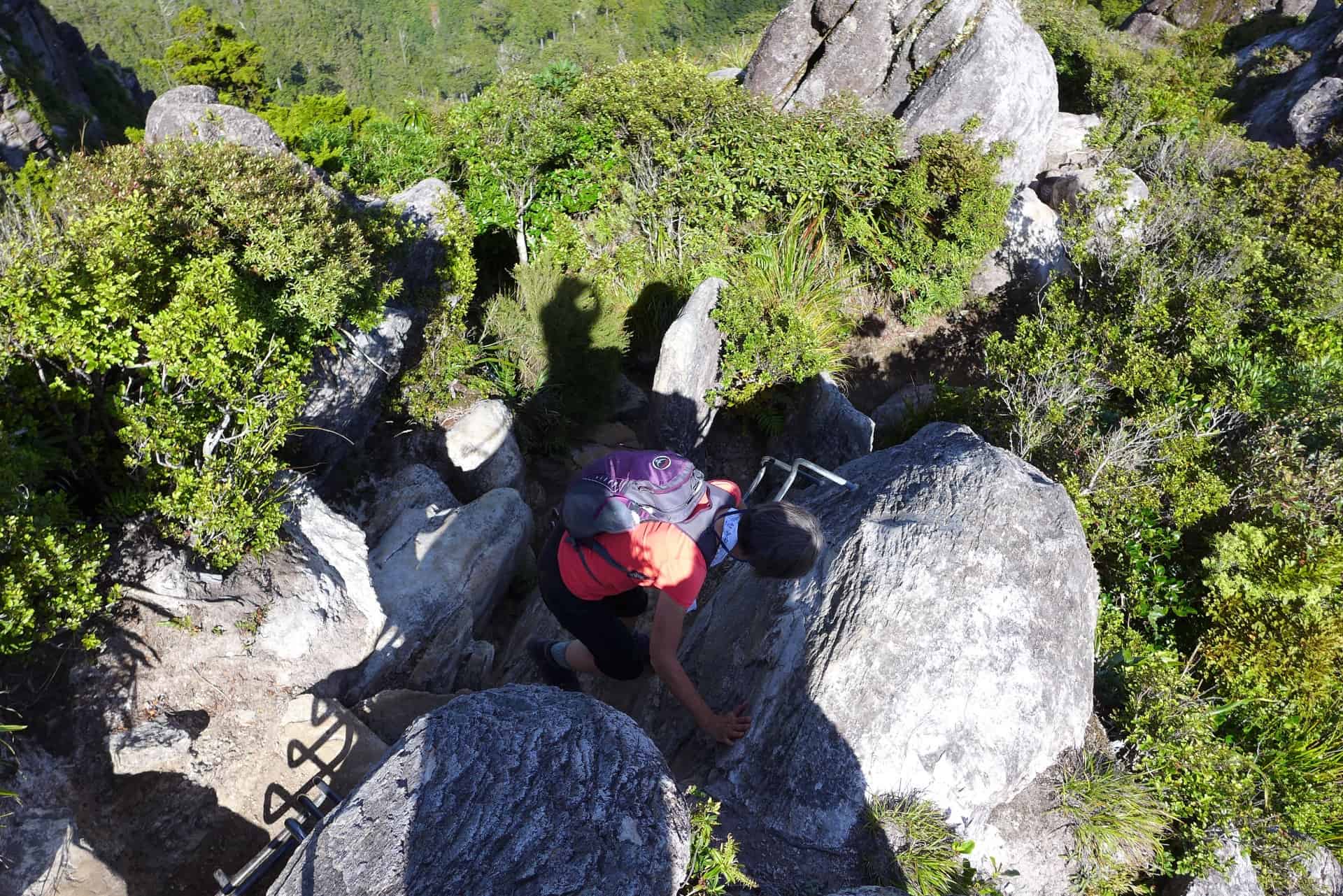 Located in the Raukumara Conservation Area in on the East Coast of the North Island, this advanced tramping track is suitable for this ready for a long day. The track is 7 hours one way but the views of the Raukumara Range make it well worth it. The track is marked until the last 400 meters which require a scramble up loose scree.

Steeped in Maori history, Mount Hikurangi was the first part of the North Island to emerge when Māui pulled it as a giant fish from the ocean. According to these beliefs, his waka, Nukutaimemeha, became stranded on the mountain and lies petrified near the mountain’s summit. 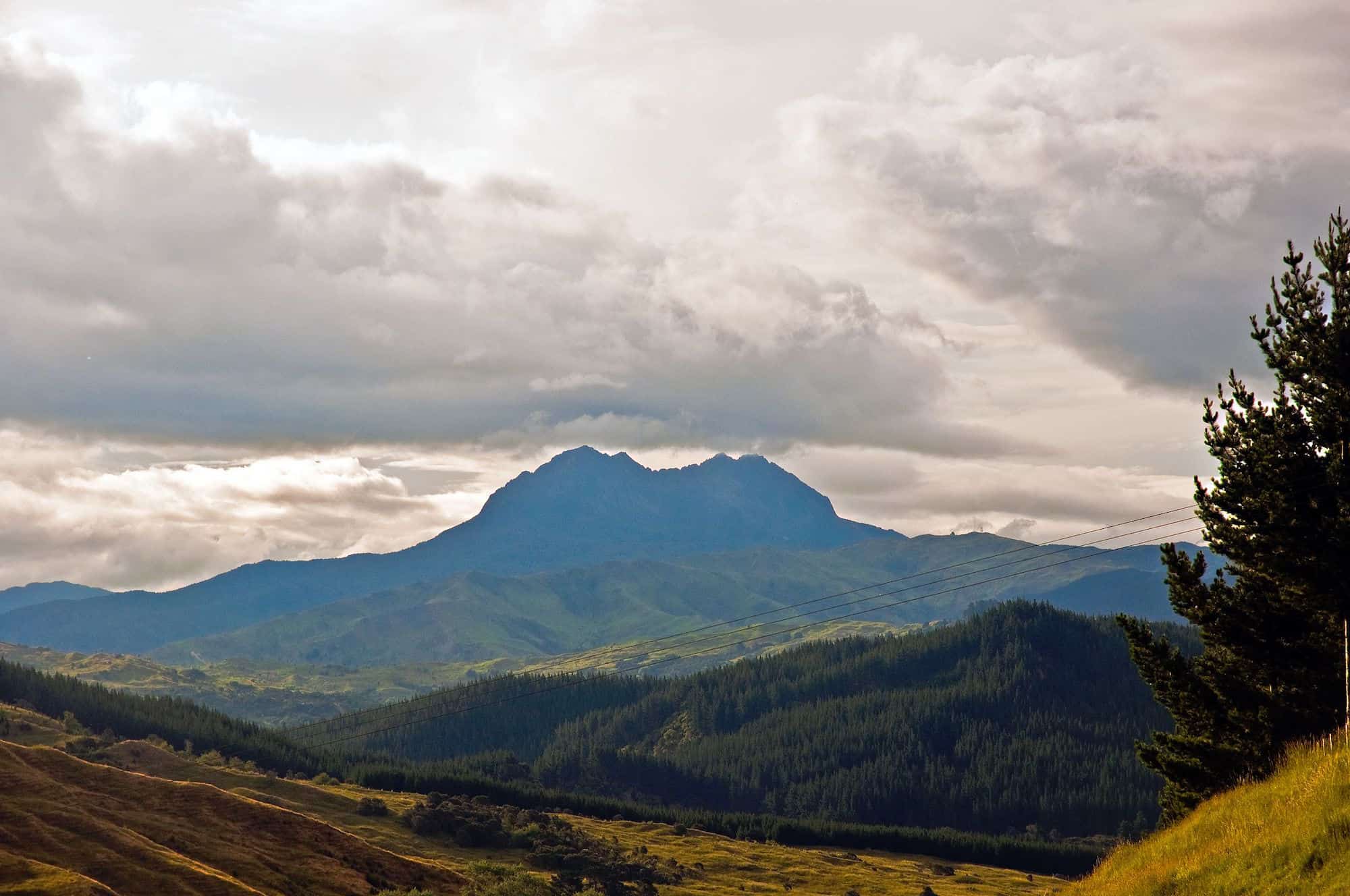 Nestled deep in the Kahurangi National Park lies Lake Peel, a picturesque lake cradled in a verdant basin. For this hike, climb steadily up to Lake Peel ridge before sidling around this stunning alpine lake.

Highlights include views of the Arthur Range and the Cobb Reservoir plus good birdlife and alpine flowers in summer. This track can be completed in a loop for those looking for an intro into multi-day hiking.

Also, one of New Zealand’s rarest birds, the takahē, was just released back into Kahurangi National Park. 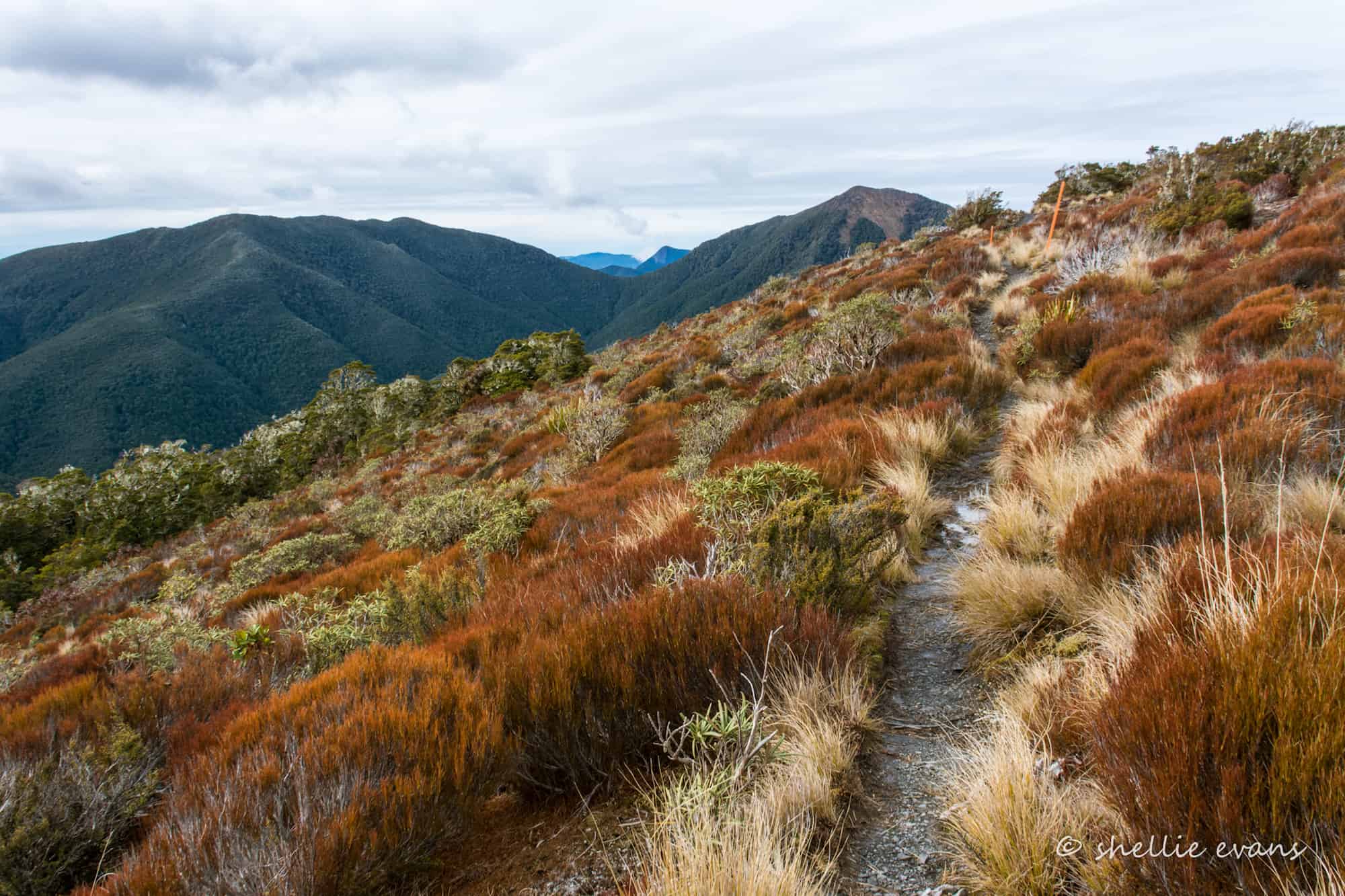 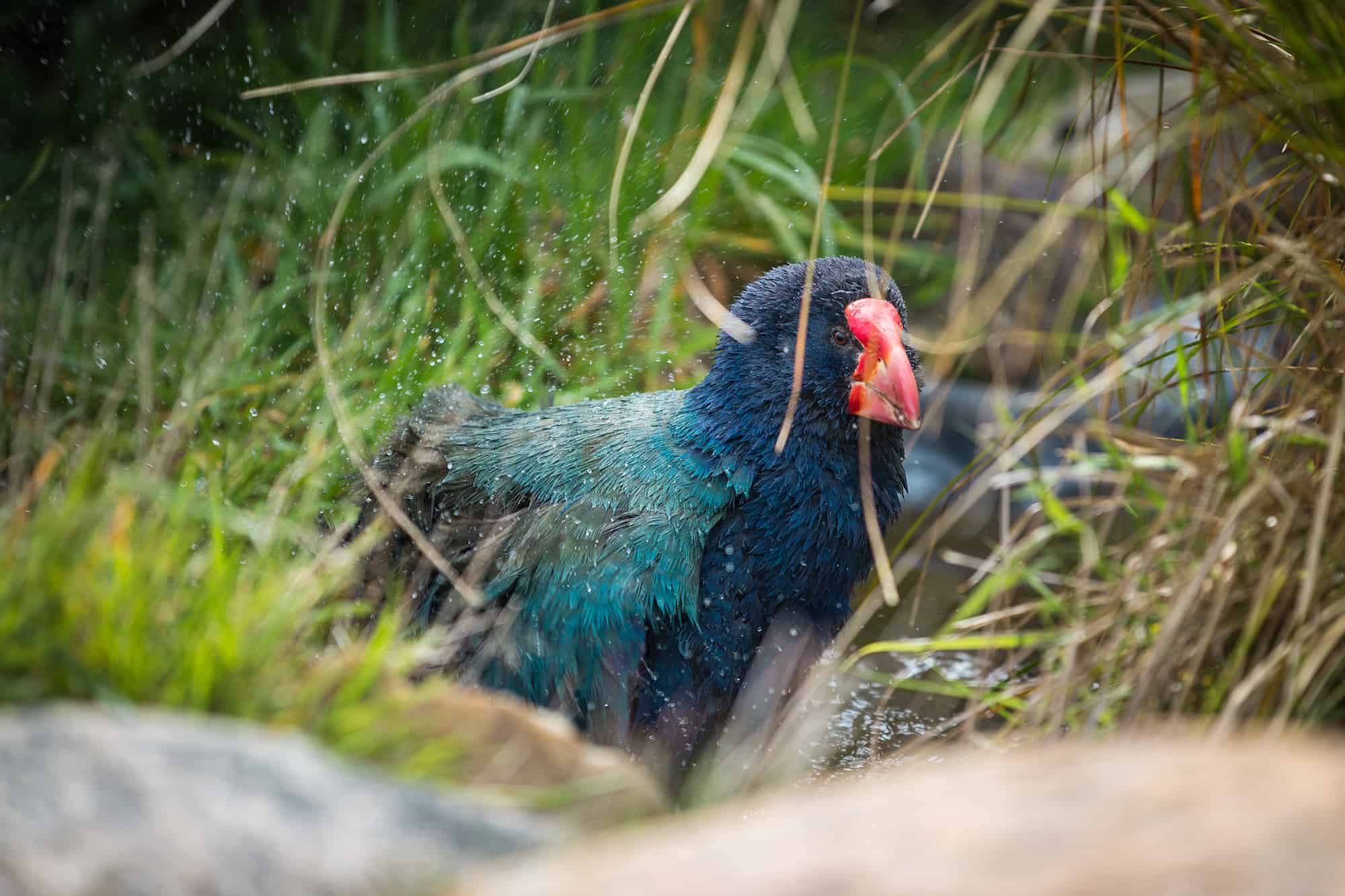 Far too many people skip out on the fascinating Marlborough Sounds in an effort to get further south in the Alps but those who stick around won’t be disappointed.

The Queen Charlotte track is a must do for many trampers and cyclists but for those looking for a quick day trip with sweeping views of the sounds, be sure to stop at Mt. Stokes. This mountain is named after Captain John Stokes, who charted the entire New Zealand coastline between 1848 and 1851 in the survey ship Acheron, visiting the Sounds in 1849.

This 4-5 hour return hike is recommended for fit trampers who don’t mind steep terrain. Standing at 1,200m, Mt Stokes is the highest point in the Marlborough Sounds.

Lake Kaniere is a West Coast gem that can’t be missed.

Hikes up the surrounding mountains give stunning views of the lake, surrounding peaks, and the Tasman Sea. Skip the popular hike to Mount Brown Hut and instead, try for the Mount Tuhua Track.

This track requires an advanced level of hiking and while the track is marked with orange triangles for the entirety of the hike, you should not underestimate the steep terrain.

The track starts off at a gentle gradient through rainforest for about the first kilometer, before starting to climb increasingly steeply. The bush is thick, but there are two viewpoints along the way which look back across Lake Kaniere 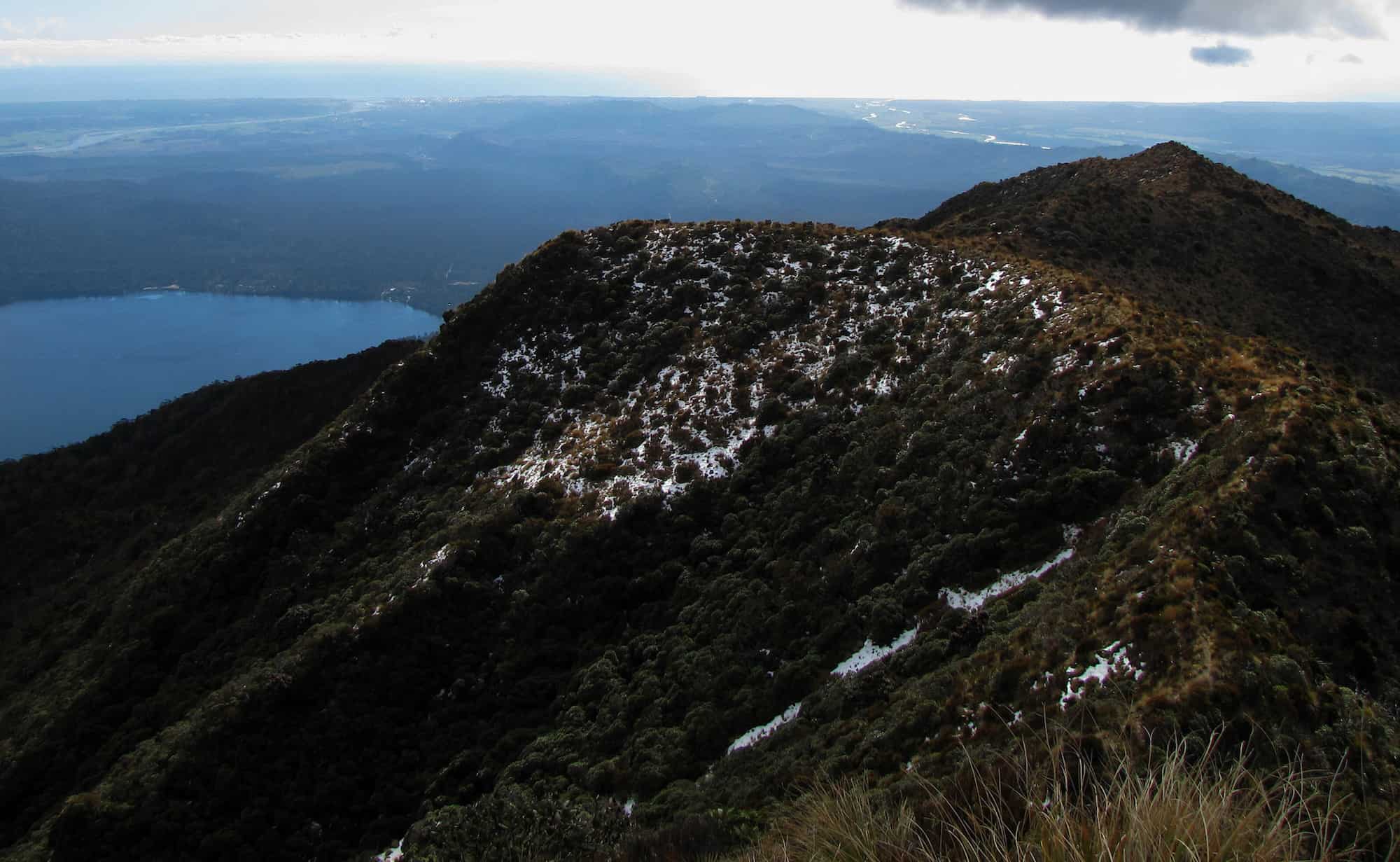 When I first traveled through Glacier Country, I was actually mildly disappointed. The very easy walks advertised around Fox and Franz glacier were paved to a viewpoint far away from the glaciers and swarming with people.

The West Coast can be difficult to tackle. The do-able walks are flat and through a valley and the walks with the amazing viewpoints often require a high level of technical skill and mountaineering or glacier experience. For those of you stuck in the middle like me, Mount Fox is a great alternative. It’s certainly a challenging hike but requires no technical equipment of knowledge when attempted in the summer.

Located just 3km south of the Fox Glacier township, this challenging climb is suited for fit, advanced trampers with good navigation skills. Start early in the morning to be on the mountaintop before cloud rolls in obscuring the view. This is a regular event, particularly in the summer months. The rough route climbs steeping up through the bush until 1021 meters where you begin to follow blue and orange markers through the grassland to 1345 meters. 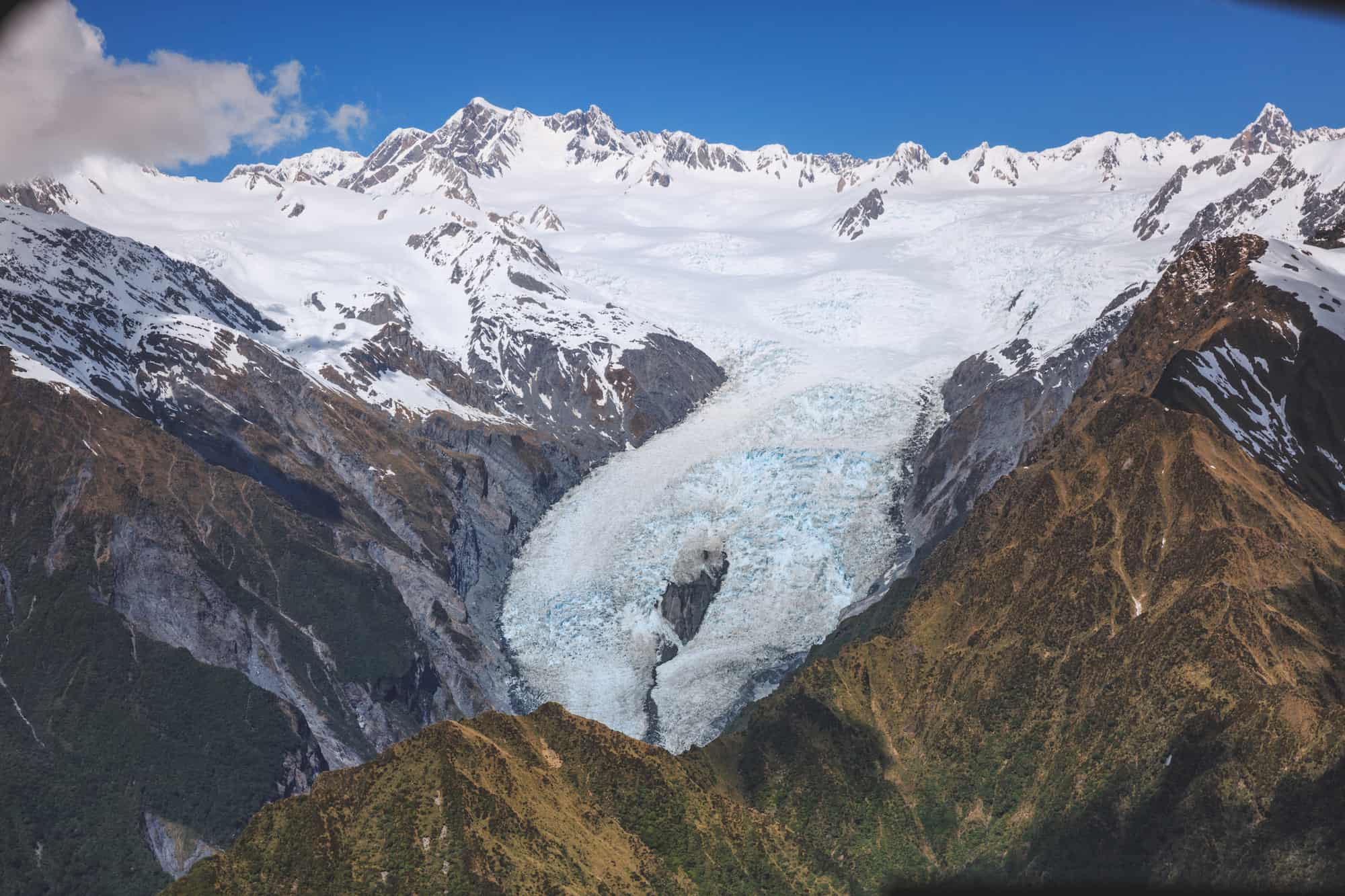 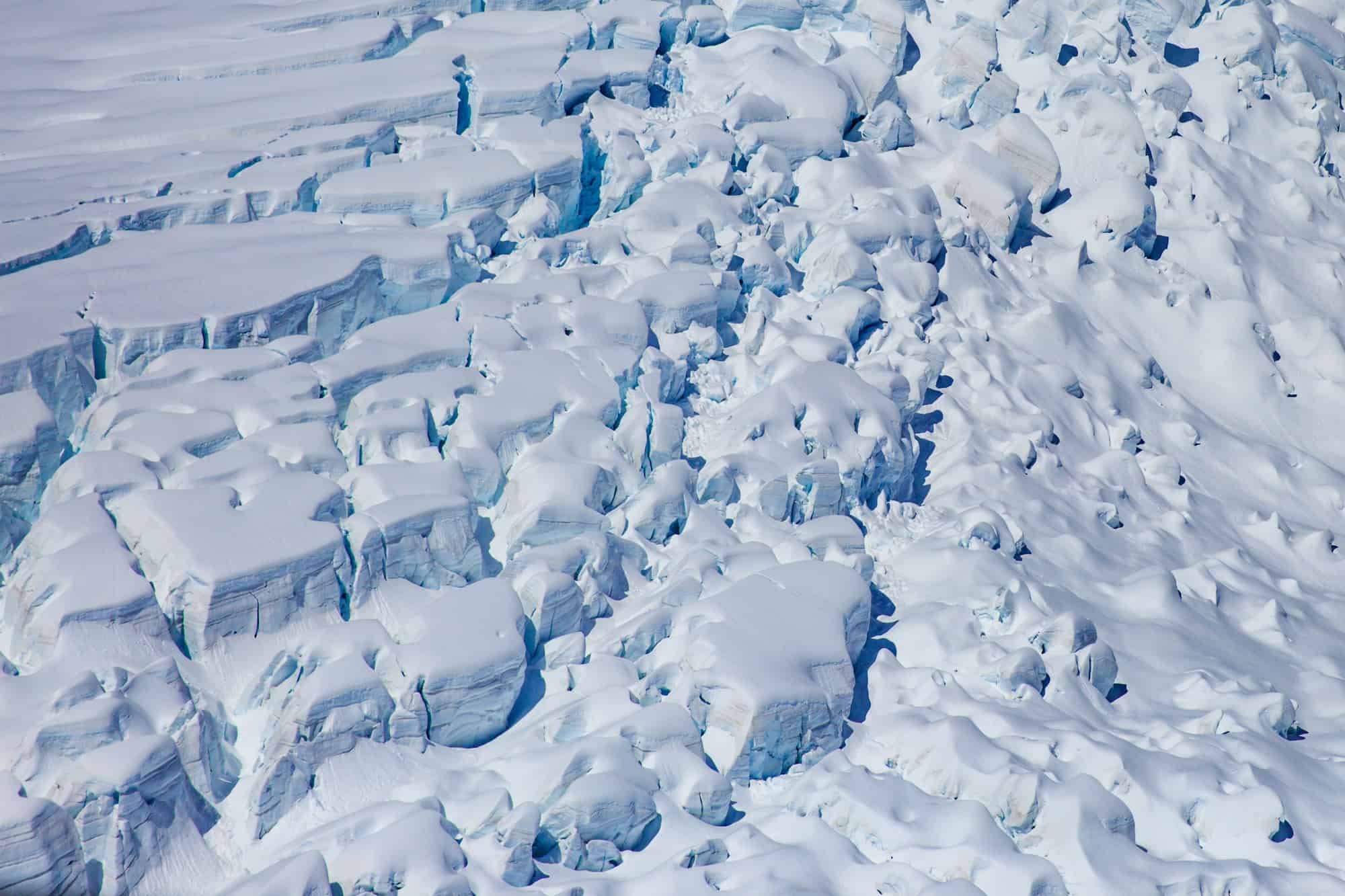 For those seeking an excellent long day walk, you can’t go wrong with Green Lake in Fiordland.

Skip the crowded Milford bay and taken this quieter track to Green Lake instead. This hike requires a steep hill filled with dense bush before descending to the shores of Green Lake.

For those wanting to continue on, follow the track to Green Lake Hut. 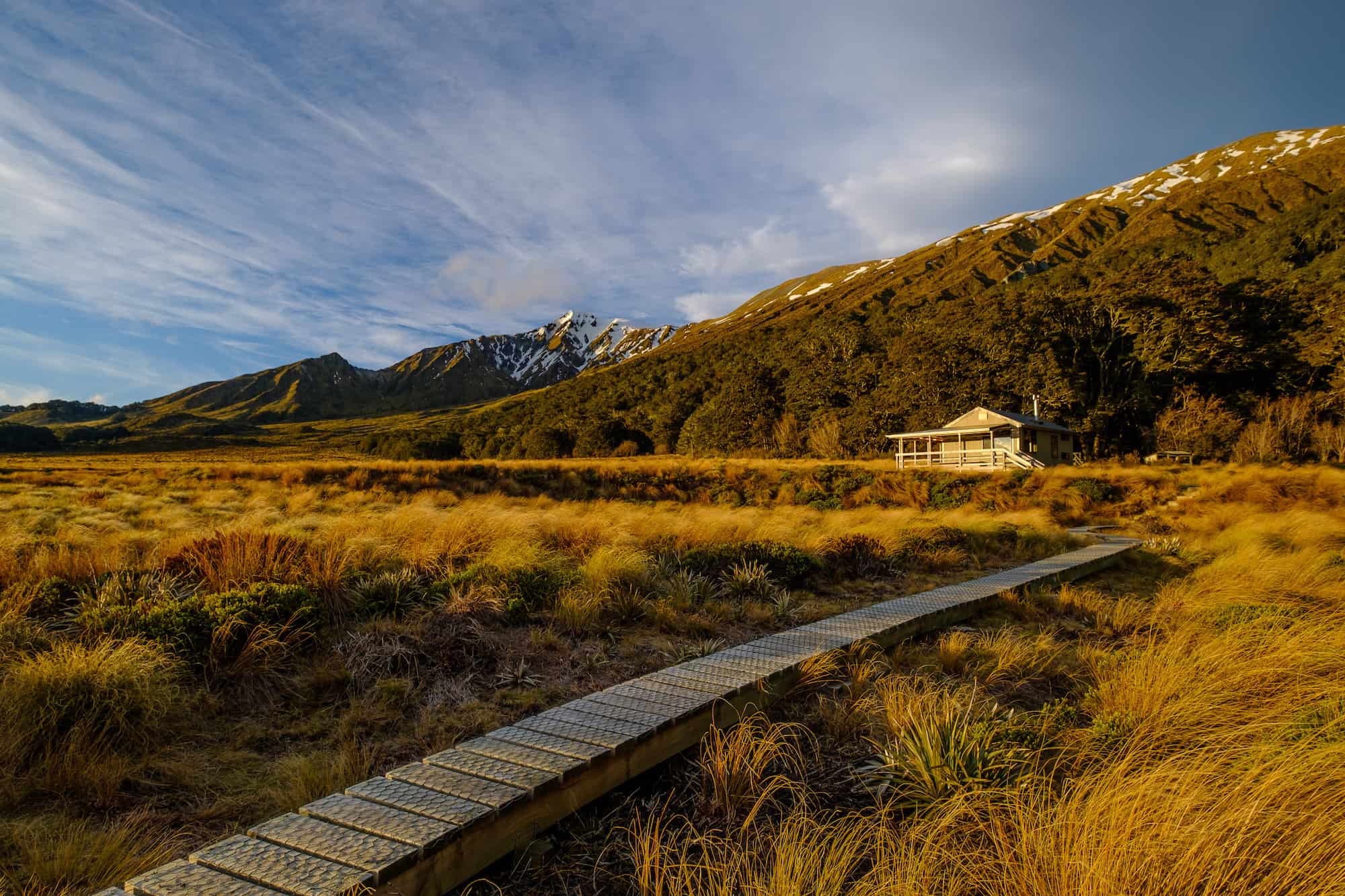 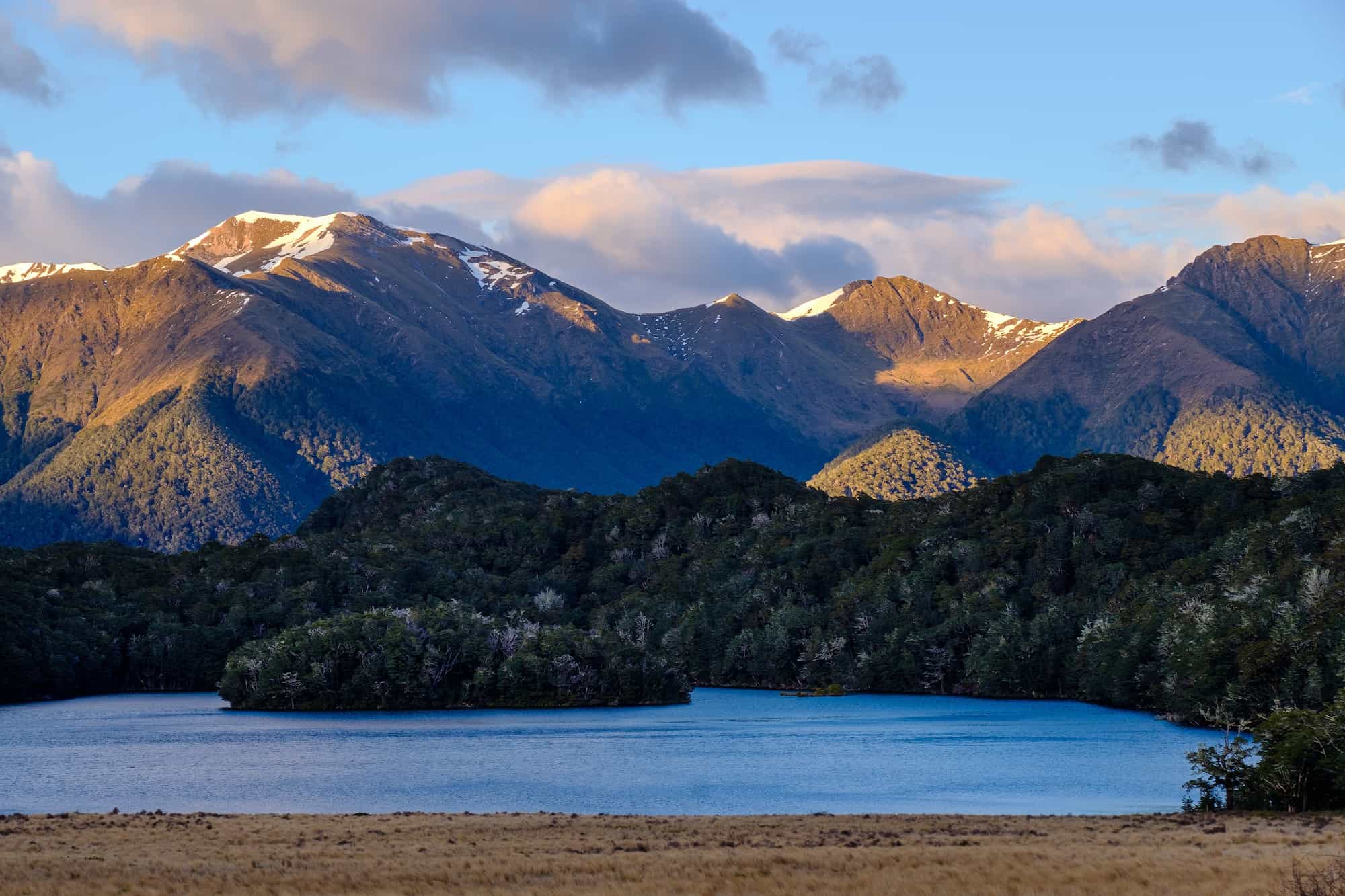 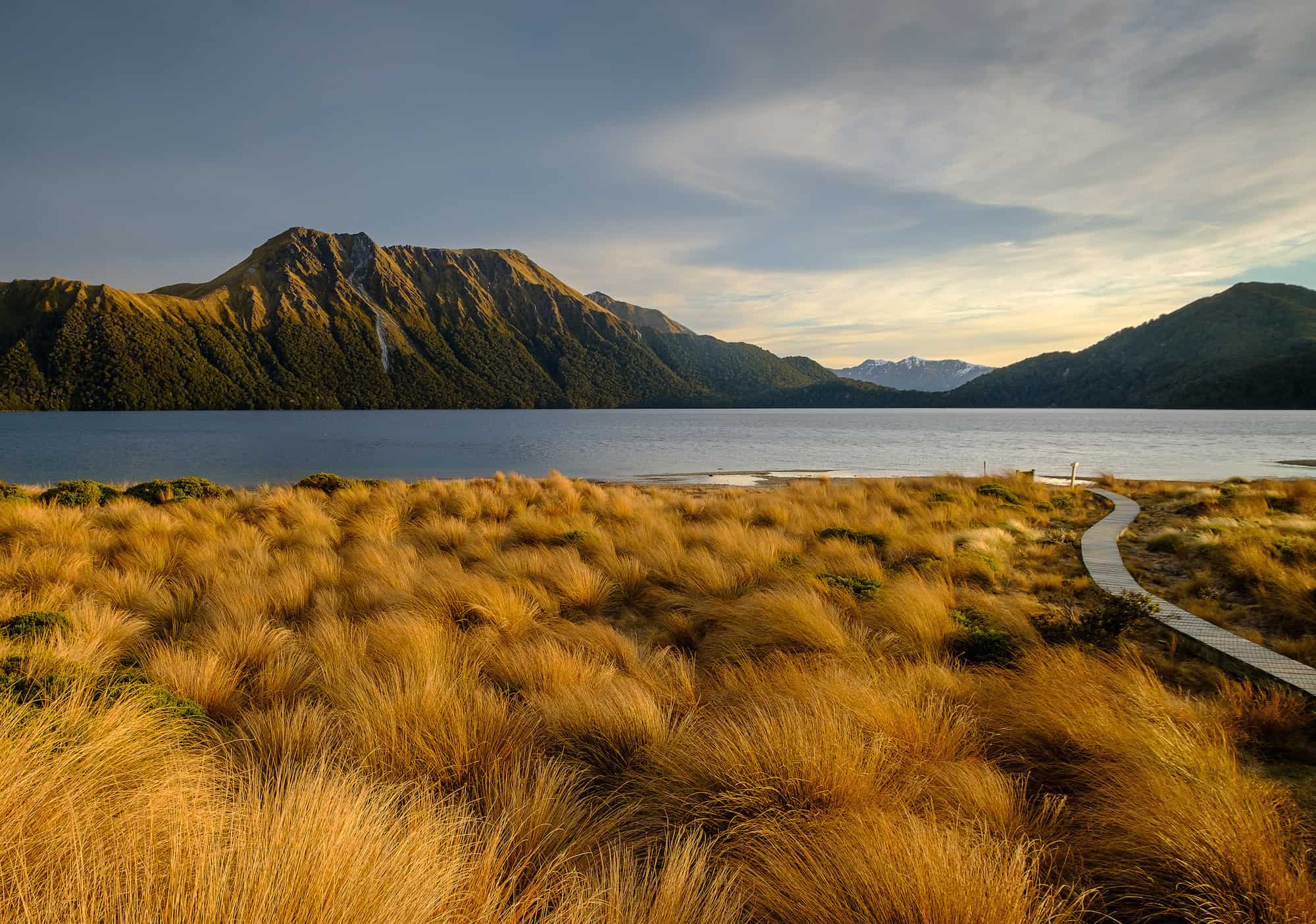 Another Fiordland treasure, the hike to Eldrig Peak is difficult but well worth the views for trampers who are up for the challenge.

Start from Borland Road and continue through beech forest then into the tops where you can enjoy unbelievably rugged views of Fiordland.

The Borland Road is unsealed, narrow and steep in places, and subject to slips, washouts, snow, ice, high winds, and fallen trees. It is usually fine for walking, mountain biking, 4WD vehicles and some other vehicles (depending on conditions).

This road is not suitable for campervans. The road may be closed at any time so check with the Fiordland DOC office before attempting this hike. 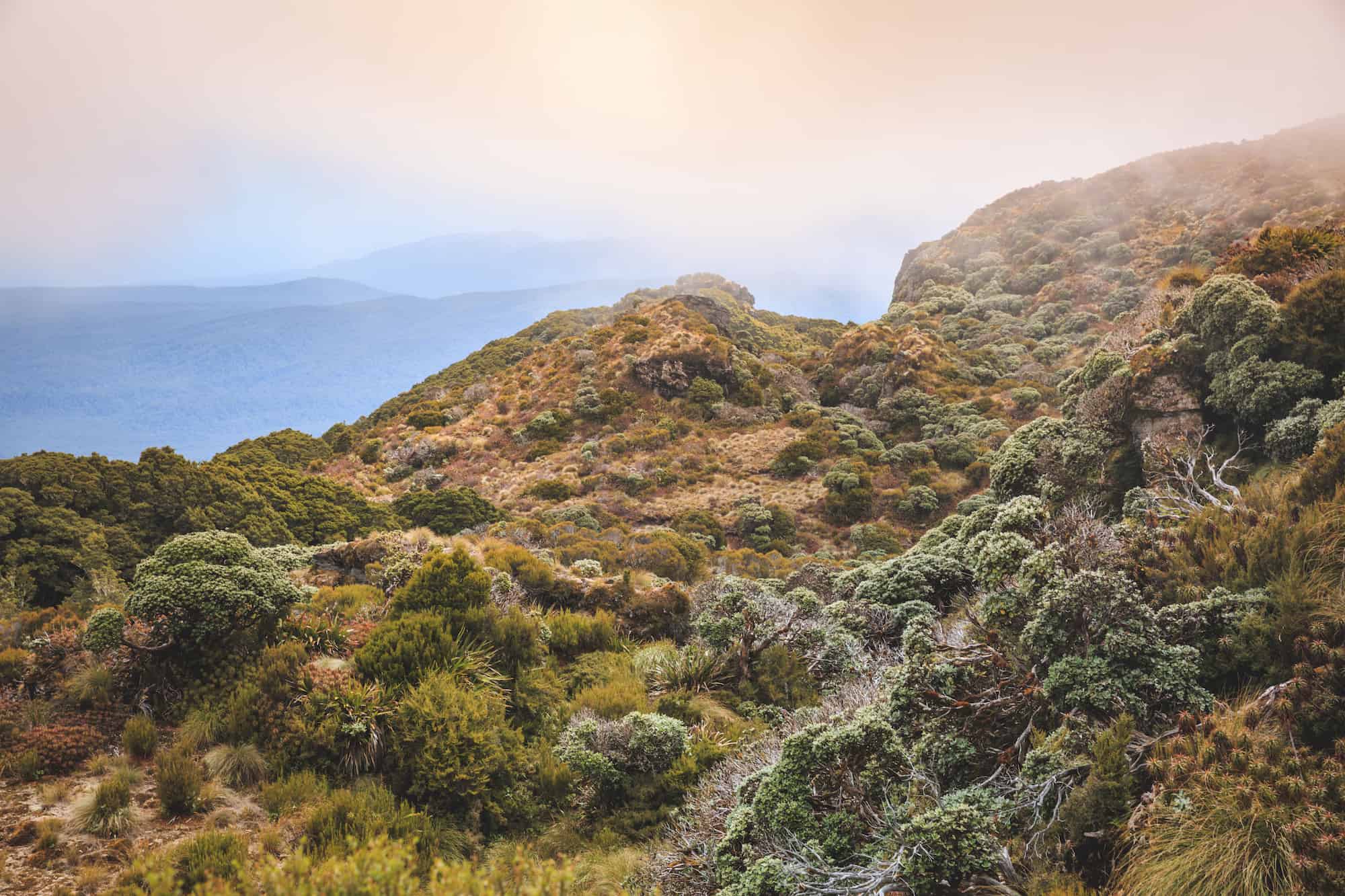 Written by Erica Clapp and was published on January 6, 2019 in Adventures, Destinations, New Zealand 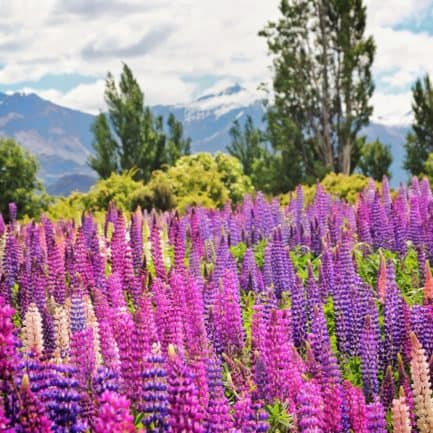 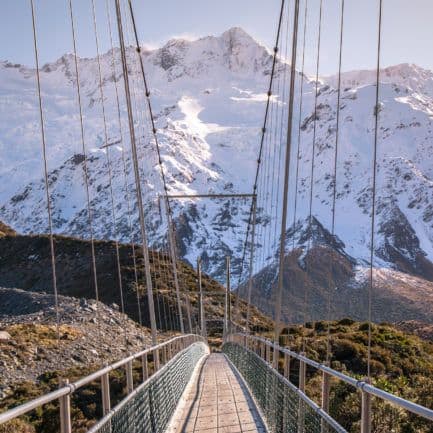 From mountains to forests to amazing coastlines, New Zealand has it allRead More 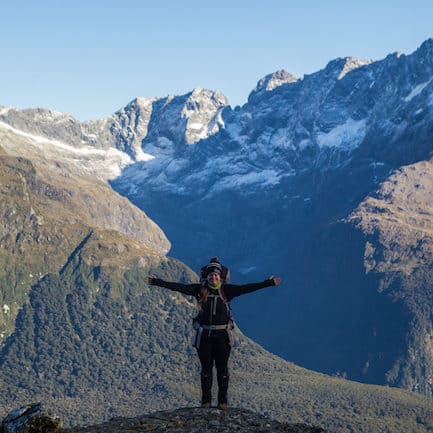