What’s chubby and feathered but can’t fly? Nocturnal with booming calls and can live for almost a century? Green and fluffy with the cutest muppet faces but super rare, and you probably won’t ever see?

If you guessed the kākāpō, you are exactly right! I’m so proud! You guys have paid attention to all my years of yarning on about odd native New Zealand birds! Anyone? Anyone? *crickets* just my mom and me then!

Well, if the kākāpō perhaps wasn’t what immediately springs to mind AND/OR you have never heard of my favorite creature on earth, well, you’re in for a treat!

Get ready for a bombardment of adorable baby kākāpō photos and stories! 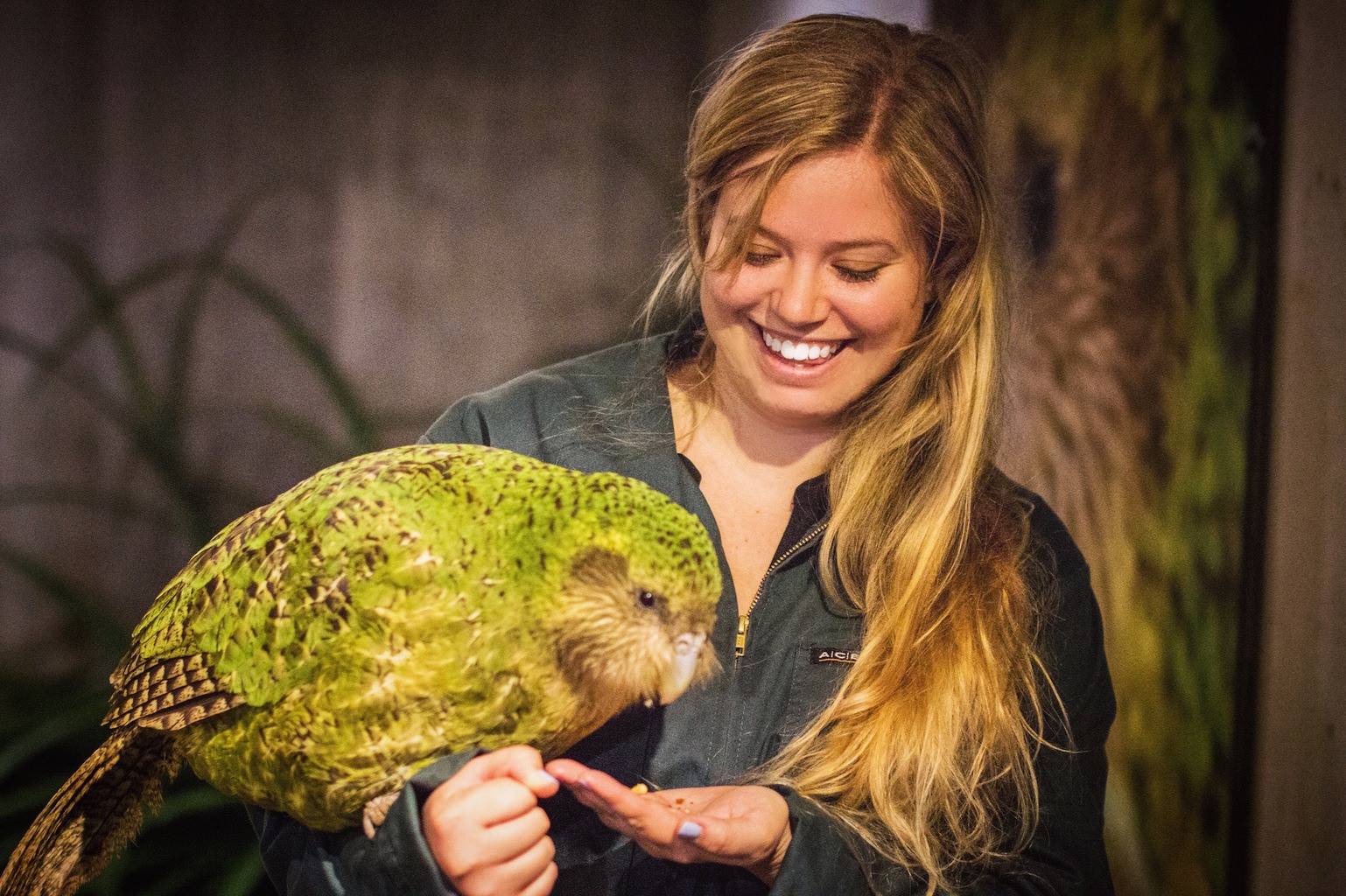 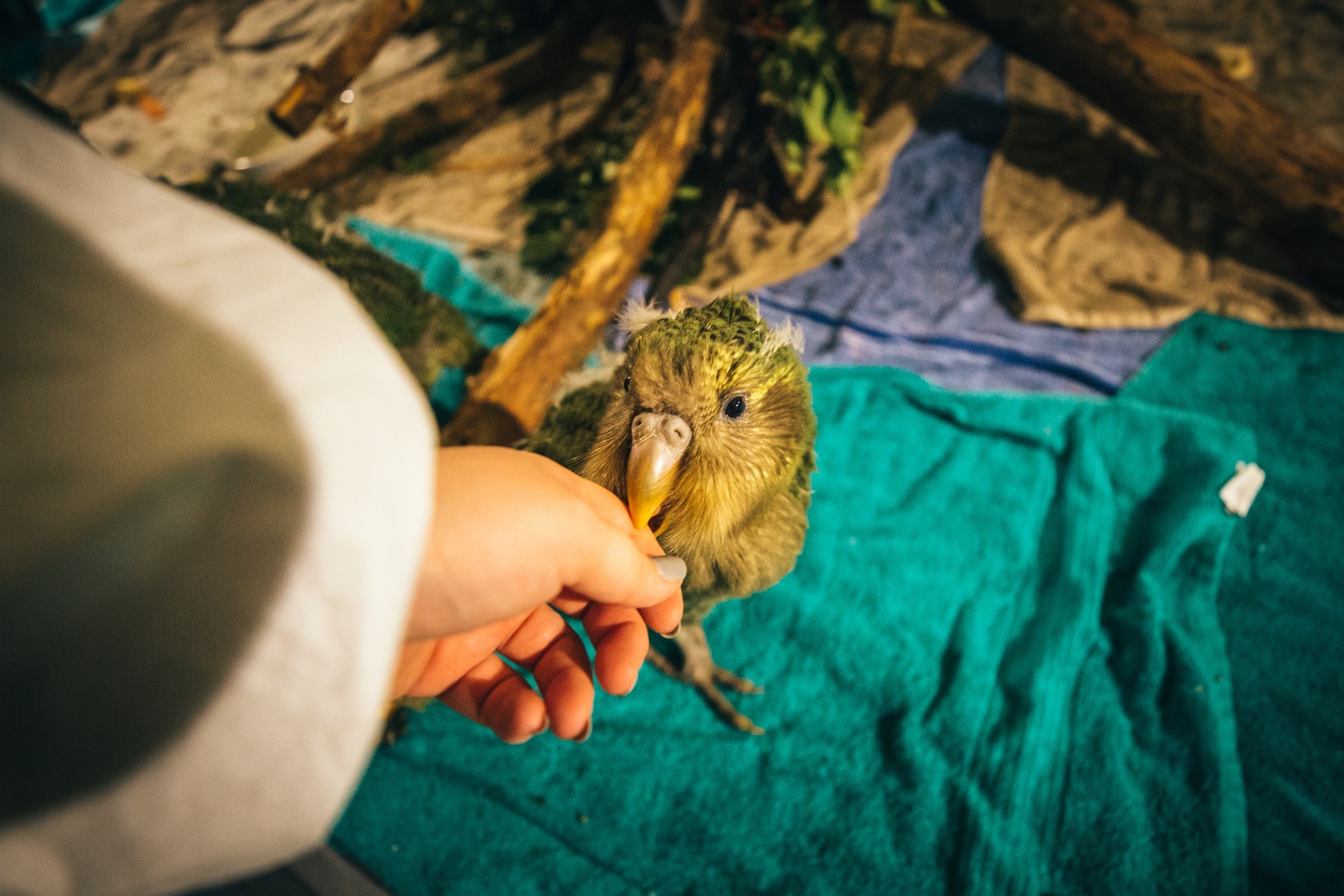 Kākāpō claim the somewhat unique title of being both one of the weirdest and rarest birds on the planet. Only found in New Zealand, kākāpō are nocturnal, flightless forest parrots who can live up to 100 years, and look kind of like an avocado and an owl had a baby.

There are only 211 total kākāpō alive today, thanks to the biggest breeding season on record this year, 2019 and the tireless hard work of the fantastic Kākāpō Recovery team. And guess who got to hang out with the new chicks?

In short, kākāpō are special. Really special, and they need our help. Read on, dear ones!

The Story of the Kākāpō 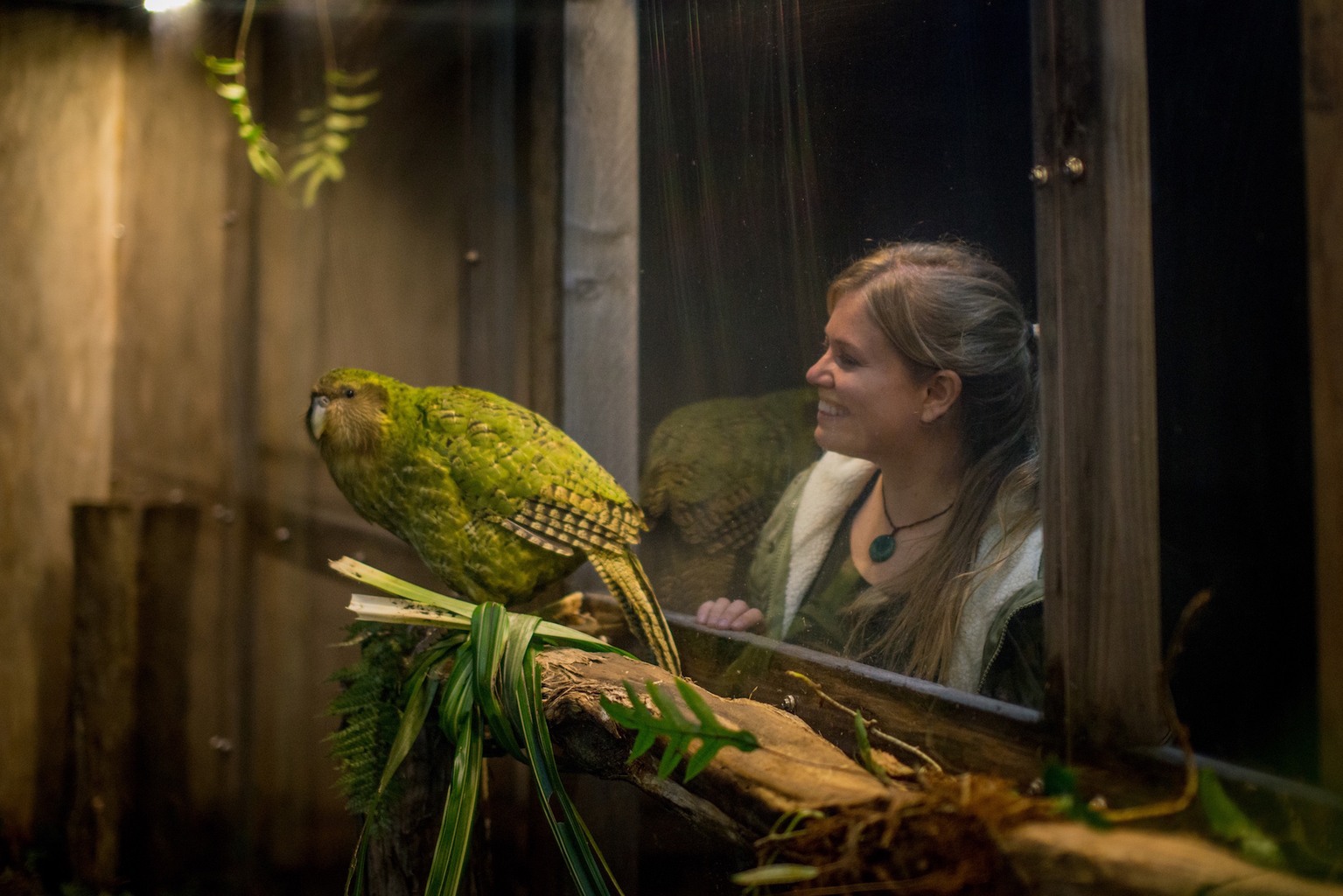 Before humans came to New Zealand (and ruined everything in terms of biodiversity – jokes, jokes, but not really), there were no native mammals on this tiny island nation in the South Pacific. No cats, nothing furry, no rats, nothing. Only two types of bats.

It was indeed a land of birds, all of whom evolved without any predators. The only thing that hunted them were other birds. Then humans came and brought with them all of the nasty mammals we hate here today, like possums, stoats (ferrets), cats, rats, etc. Around 50 species of birds went extinct after humans arrived here.

We’ve got some making up to do, am I right?

**Follow kākāpō scientist Dr. Andrew Digby on Twitter for the most up-to-date info around these marvelous birds

Our poor unique native birds had no defenses – it was a veritable slaughter.

Nowadays, more than 80% of New Zealand’s native birds are in serious trouble, many facing extinction. And it’s estimated that rats, possums, and stoats kill 25 million birds a year here in New Zealand. Let that sink in for a moment.

However, New Zealand is committed to restoring the ecosystems to how they once were, even launching an ambitious campaign Predator Free 2050 to remove pests from NZ.

The story of wildlife in New Zealand is a tragic one, but one also full of hope too. Let’s look at the kākāpō, a bird by all accounts should not have survived. 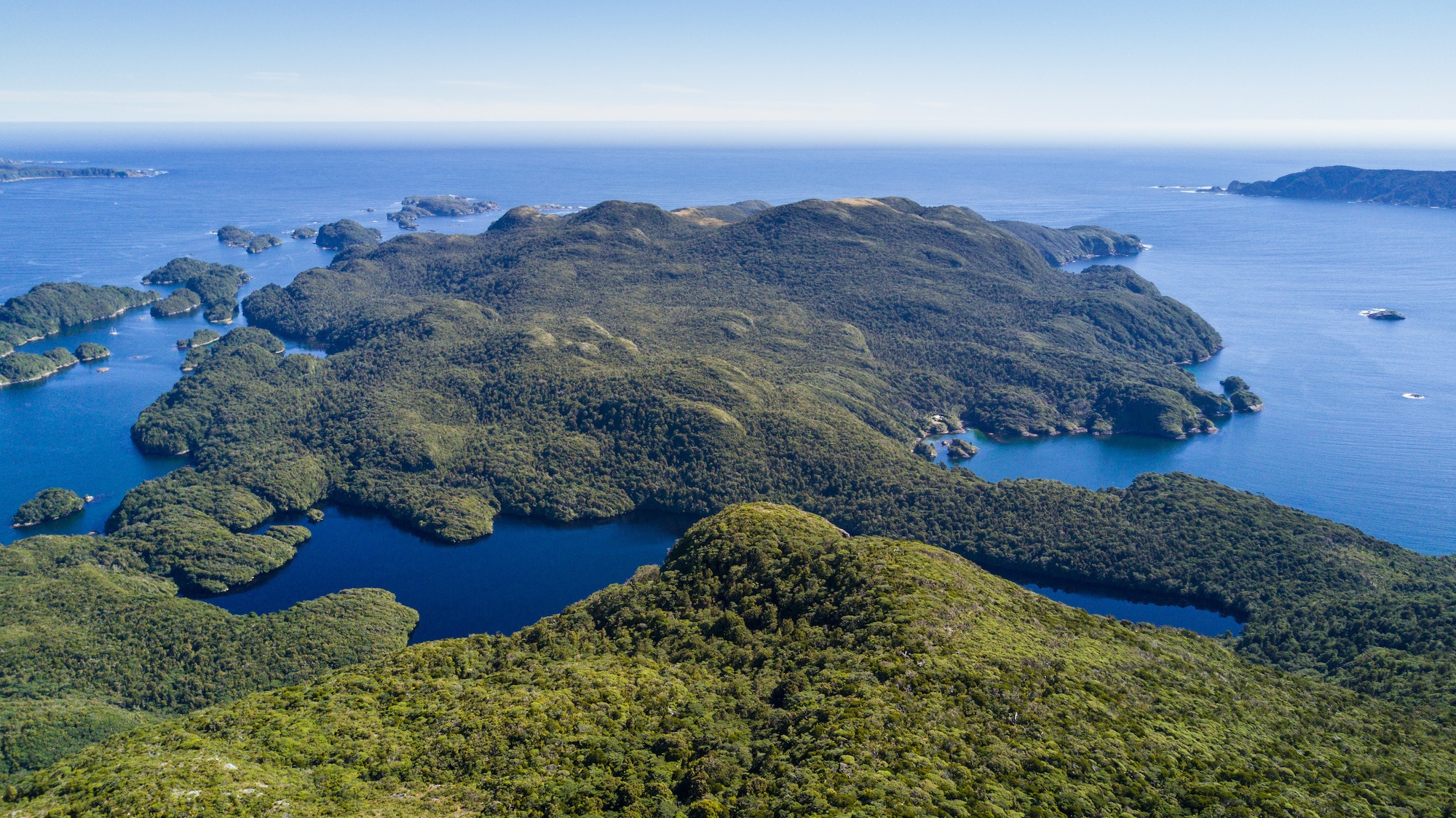 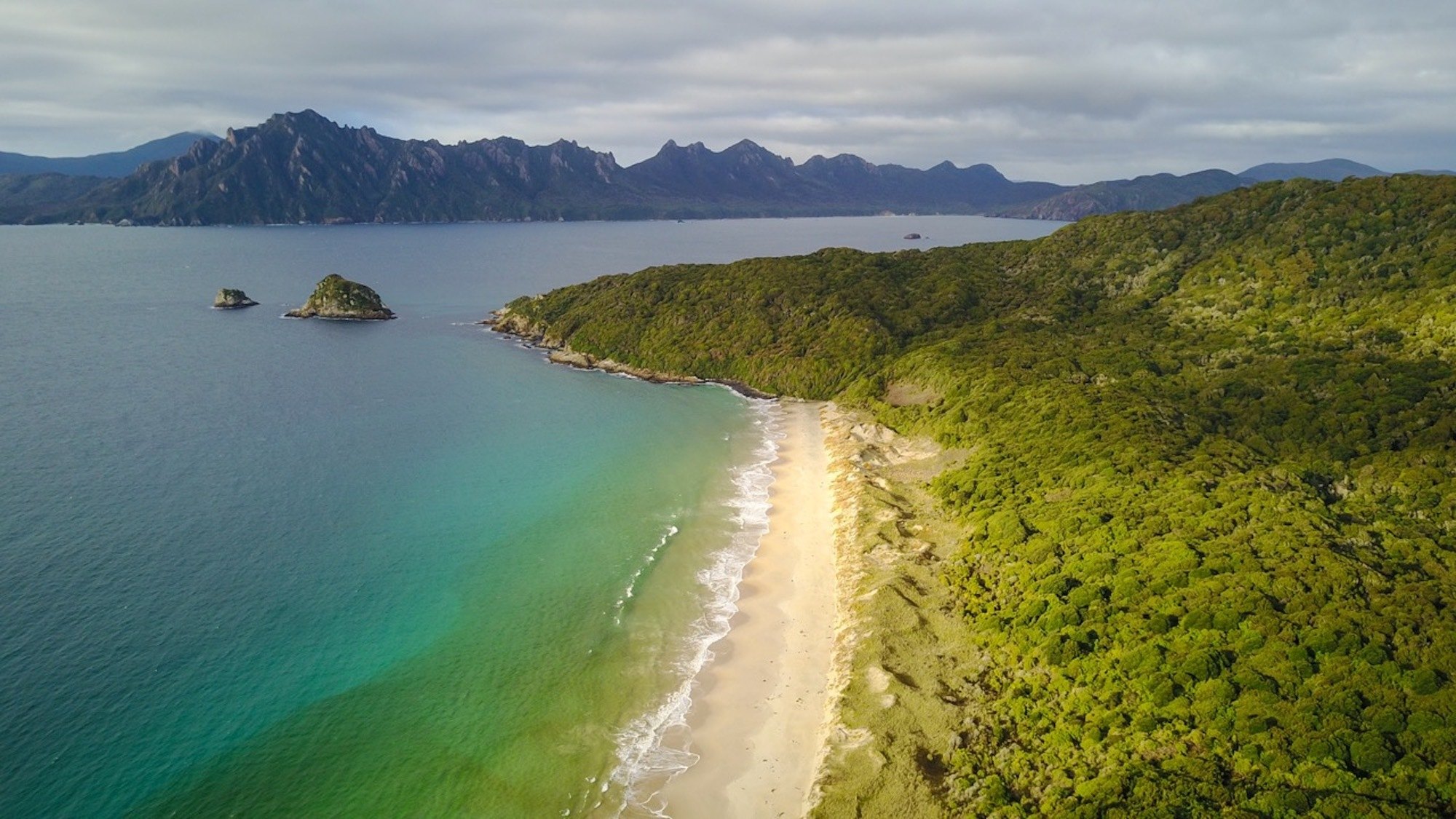 Once the third most common bird in New Zealand, the charming kākāpō didn’t stand a chance once mammals entered the scene. Flightless but well camouflaged, their primary defense mechanism was to freeze and avoid being seen. This worked well when eagles hunted them but didn’t stand up once mammals arrived and hunted by smell.

Another quirky fact about kākāpō is that they have a strong scent to them – super weird, right!

You often can get a whiff of them on the breeze before you see them (if you can see them at all), and the rangers who lovingly tend these parrots have described it to me as the smell of the inside of an old violin case. Musty, sweet and old, rather like these creatures.

Pungent, chubby birds who can’t fly and stand still when scared? Well, I do believe we call that easy prey. The kākāpō didn’t stand a chance. 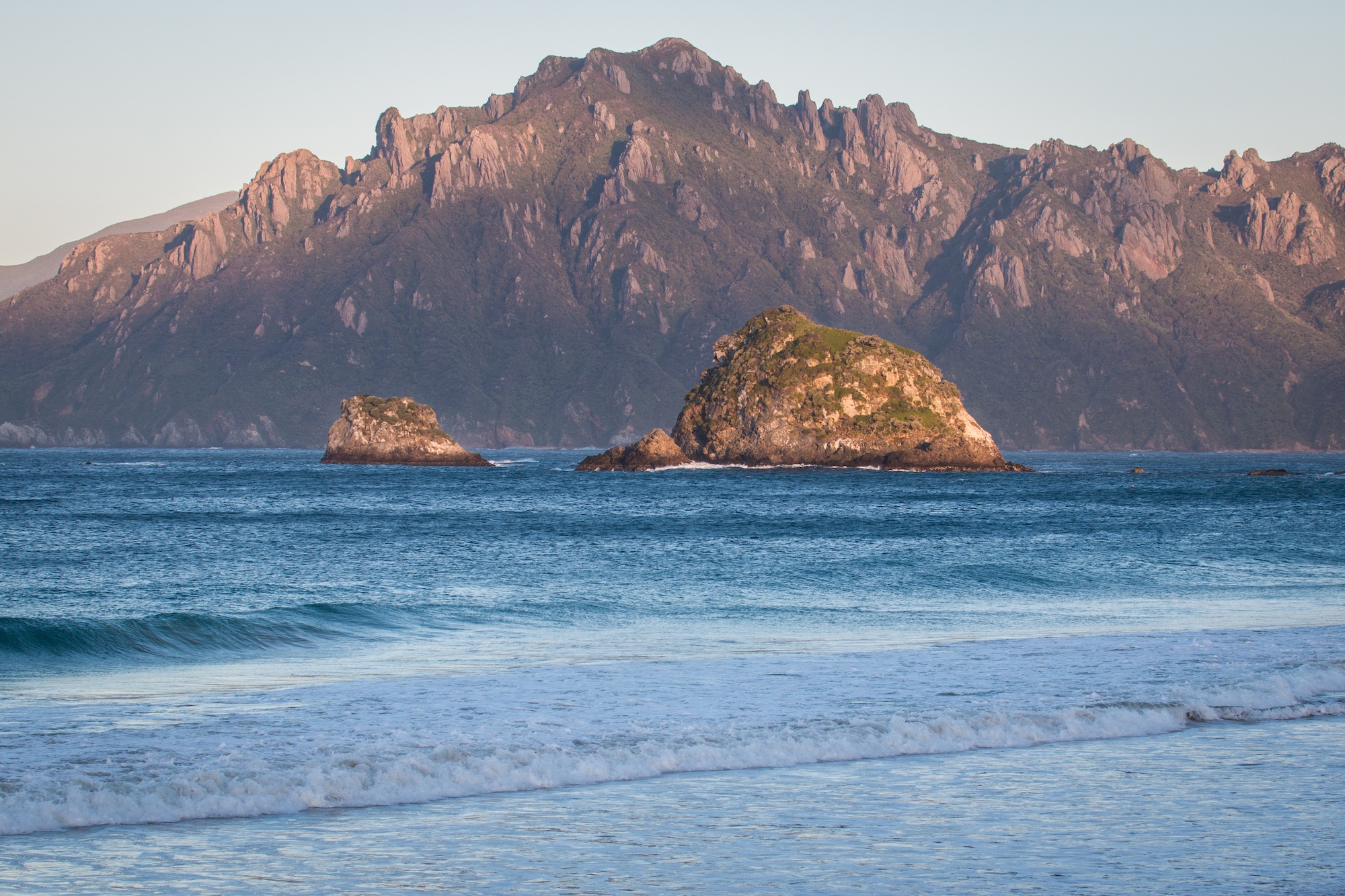 By the 1970’s century, kākāpō were thought to be extinct, before a handful of old males were living at the very top of some of the steepest mountains in Fiordland. A while later, another population was found living on Stewart Island, though feral cats were decimating them.

The kākāpō weren’t going to survive much longer, and from the ’70s to the mid-’90s, all of the birds were moved to predator-free islands. Then the Kākāpō Recovery Programme was established in 1995.

Now, kākāpō are lovingly tended by a dedicated team of rangers, scientists, vet, volunteers, and donors who are doing everything possible to try to bring back these incredible birds from the very brink of extinction. They’re funded in large part on donations and sponsorships from DOC and Meridian Energy.

Donate to Kākāpō Recovery. All donations make a difference 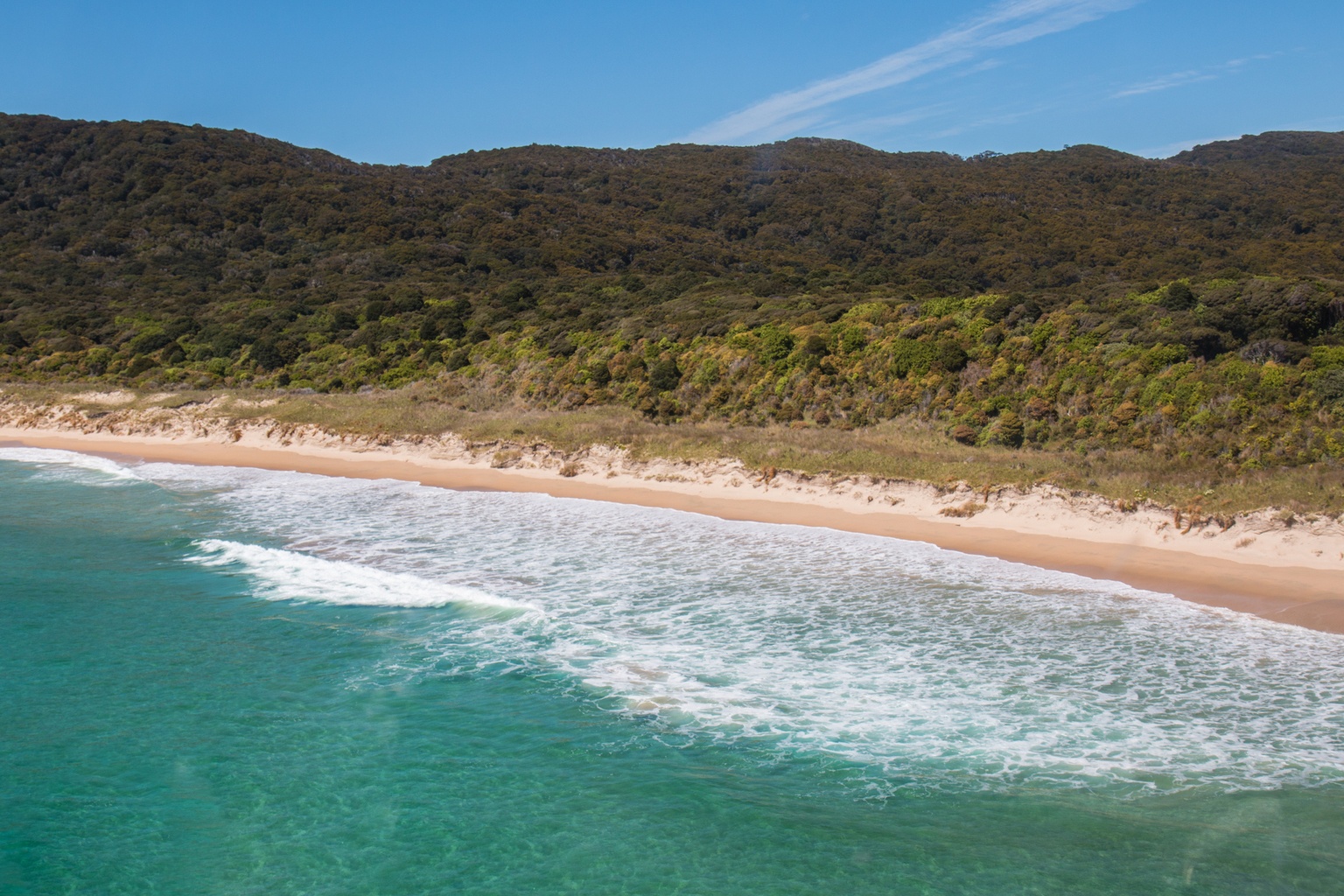 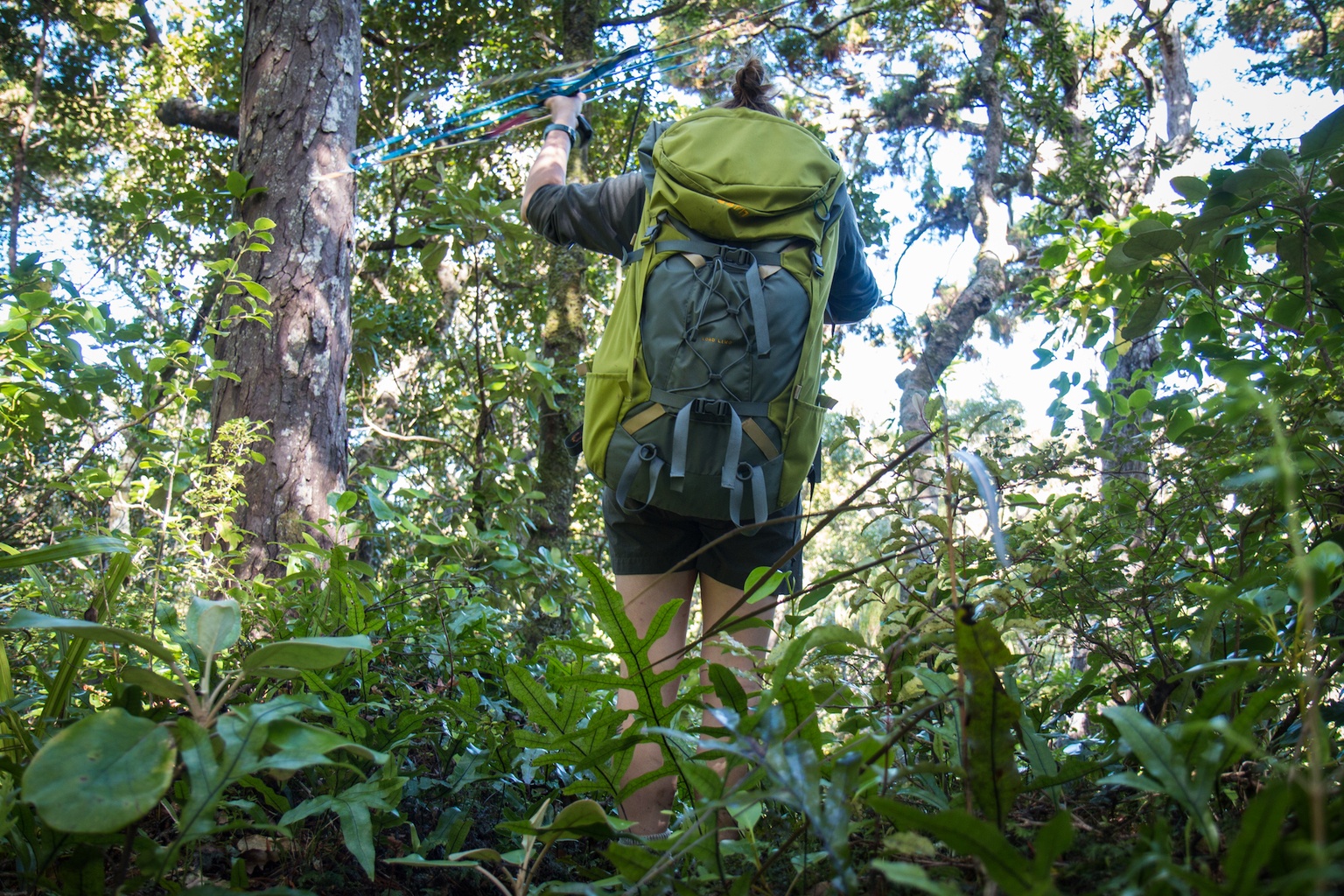 The majority of kākāpō these days live on a few predator-free islands, like Anchor Island and on Codfish Island / Whenua Hou, which I was lucky enough to visit a few years ago.

One reason that kākāpō have struggled to bounce back from the brink of extinction is that they only breed every two to four years when Rimu tree’s fruit grows abundantly – the period is known as a “mast year.” Because they are so inbred, genetic diversity is a big problem, and more than half of their eggs are infertile. 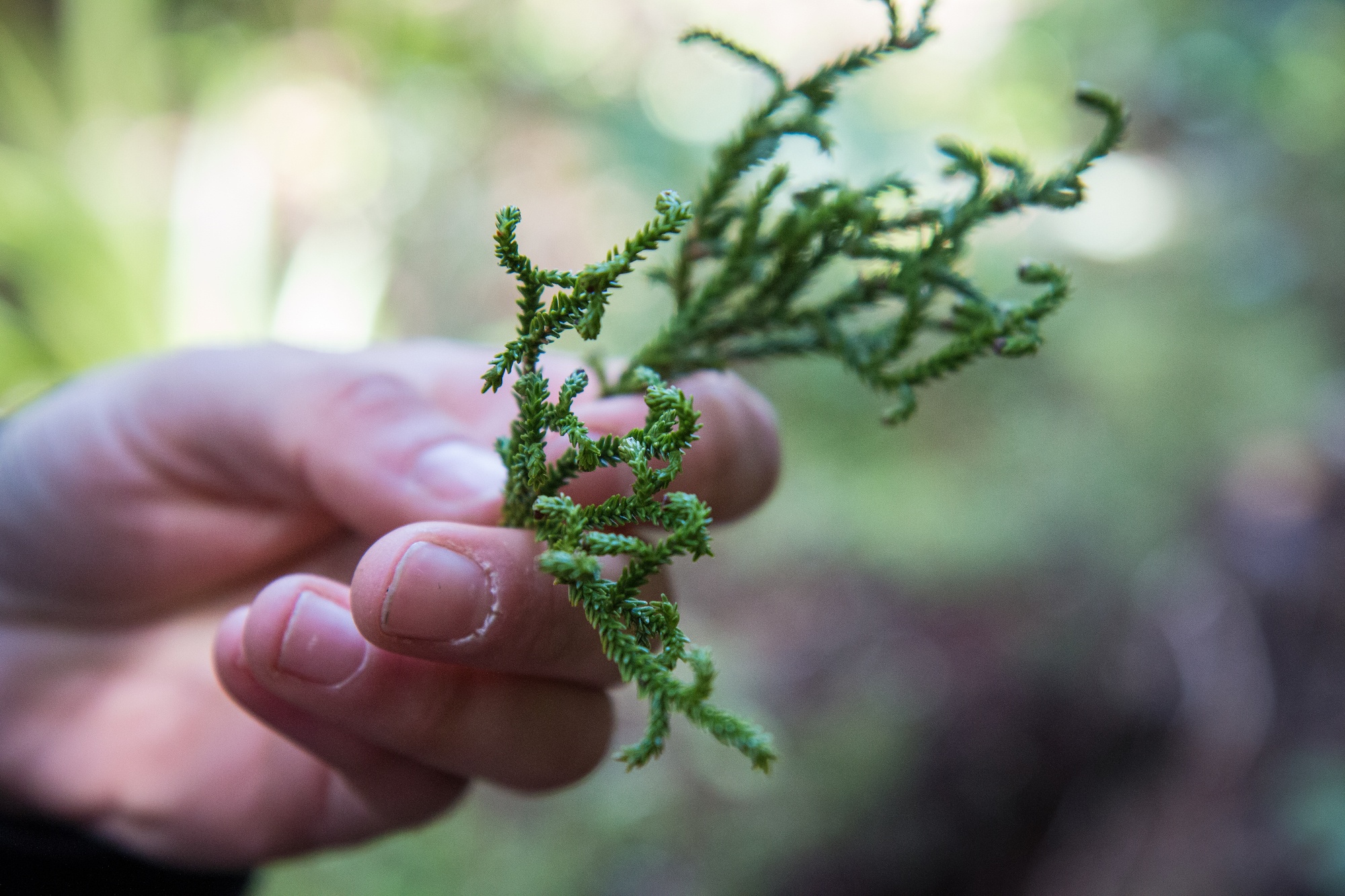 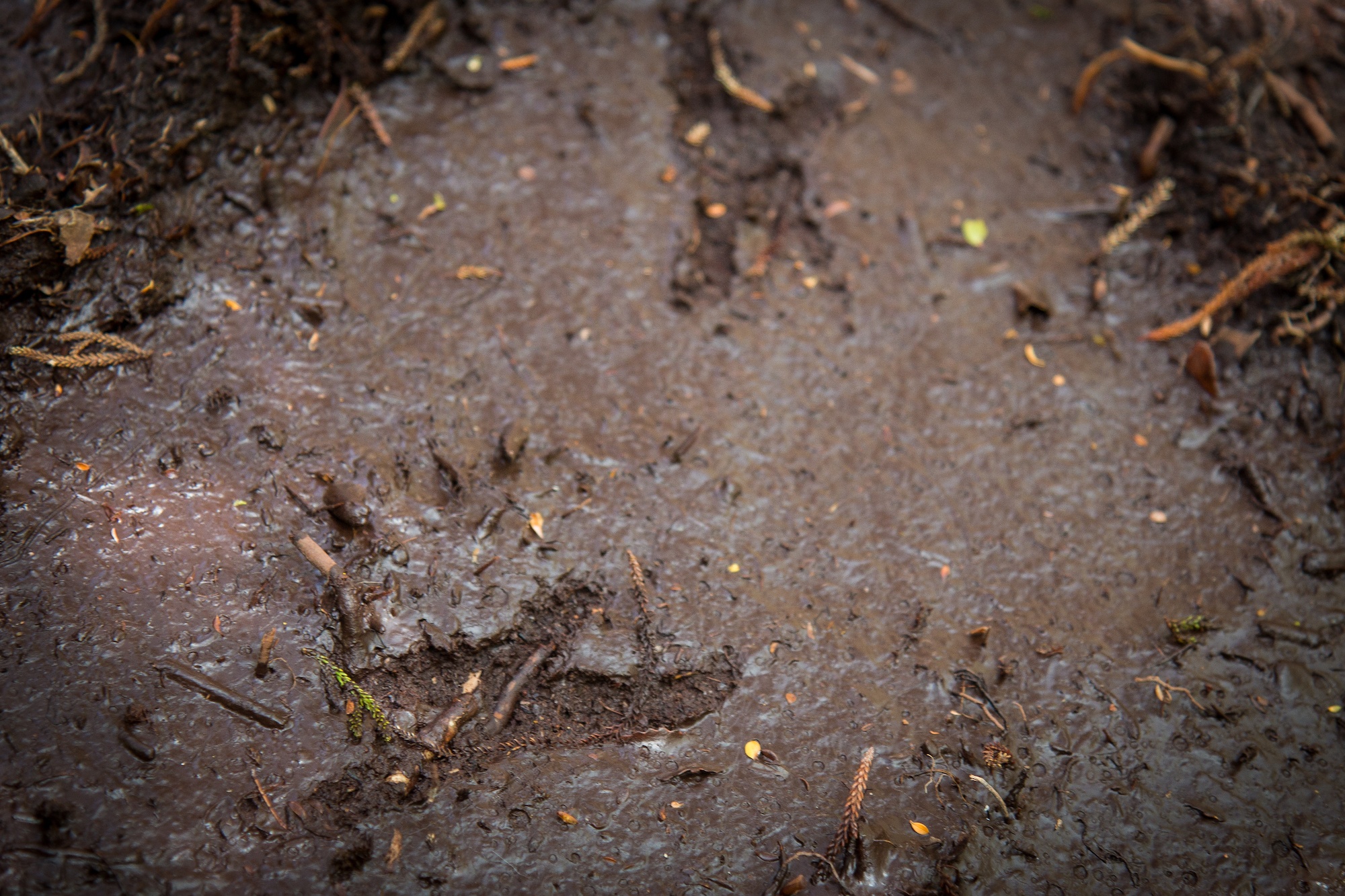 But lucky for us, 2019 was shaping up to be a bumper breeding year for kākāpō with an overwhelming abundance of fruit.

Time for all hands on deck!

2019 was a kākāpō breeding season full of highs and lows.

The somewhat quiet offshore islands where they call home quickly become extremely busy throughout the summer as teams of rangers, volunteers and scientists travel down to do everything they can to make it the most successful breeding season possible.

2019 biggest ever on record after a mast year leads to unprecedented amounts of rimu fruit, which is necessary for kākāpō to breed and hatch chicks successfully.

A record of 71 chicks survived through to juvenile age; the previous record was 32.

For many reasons, some chicks were taken off the islands to be hand-reread in special facilities on the mainland, which doesn’t impact them at all if they are raised together – and not alone like Sirocco was – the kākāpō who thinks he’s human.

Later the chicks are released into the wild, tagged with a transmitter.

I was lucky enough to visit some of this year’s chicks down in Invercargill as they were being raised, and it was a life-changing experience, as you might imagine. Making do with limited resources, people, and budget, it’s compelling to see what the kākāpō recovery team can manage. 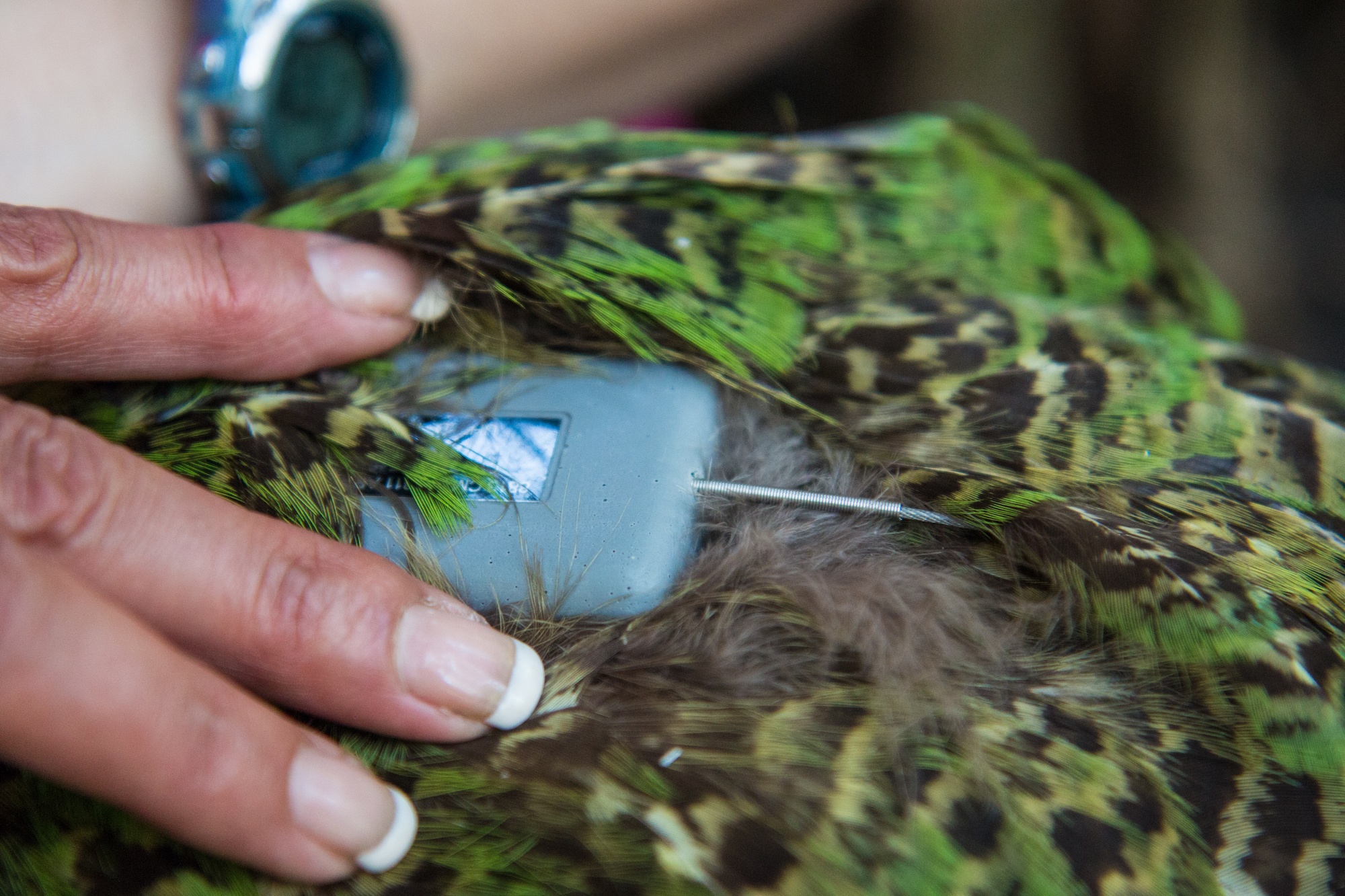 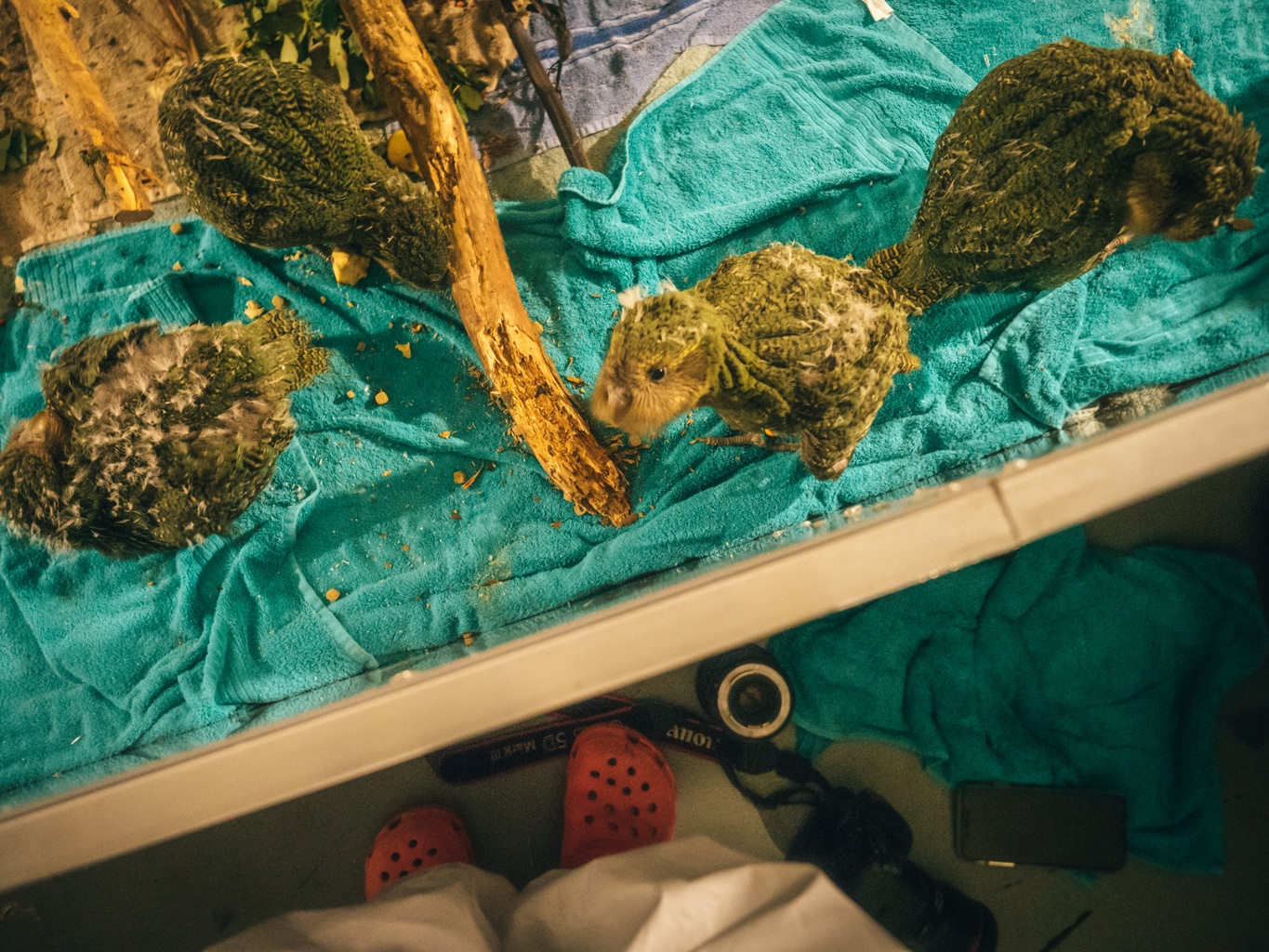 Every time I visit them, I dream of the day I am a millionaire so I can adequately fund all of the conservation projects I care deeply about. Sigh. I know it’s a big dream, but one day guys!

In the meantime, if there are any millionaires out there with idly bank accounts looking to support birds, do get in touch. 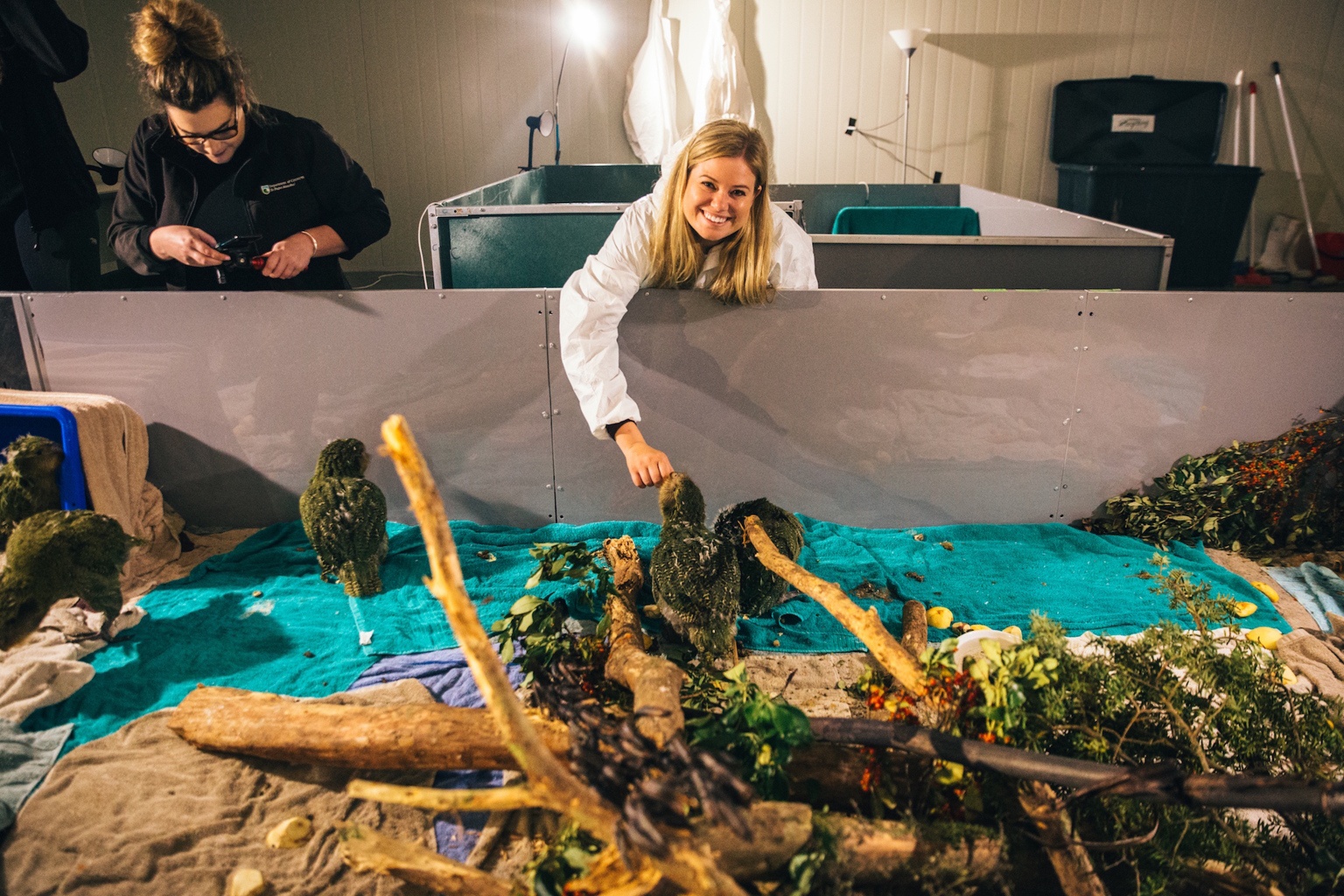 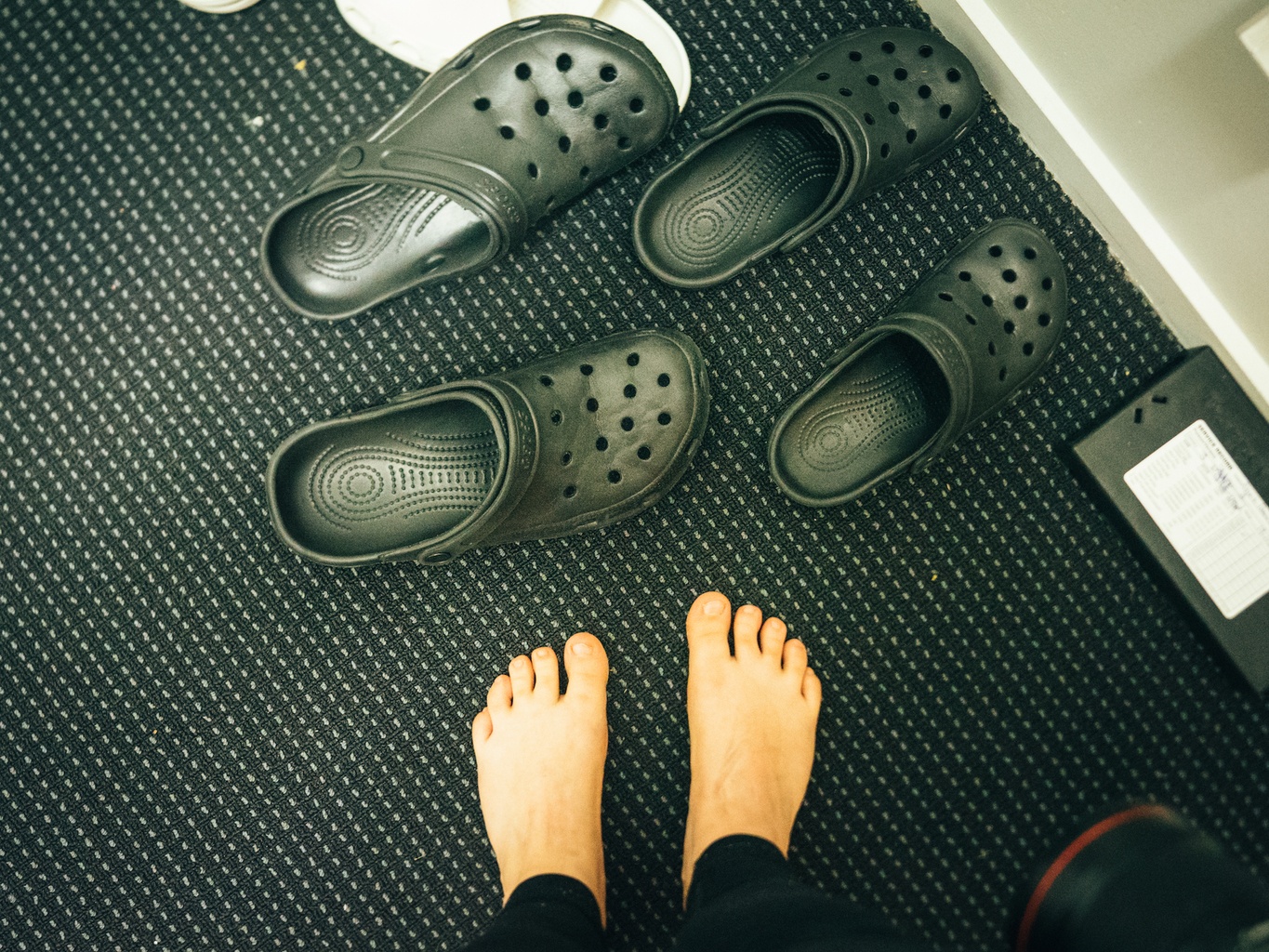 The steps taken to look after the chicks are immense, and I can’t even begin to say thank you to the incredibly hard-working kākāpō team who run around like crazy for a year during a breeding season doing everything they can to ensure these birds survive.

It’s dedication and passion that inspires me to my core. These birds wouldn’t have a chance without them.

Suitably sterilized, zipped up, and croc-ed out, I was able to weave my way through the facility to meet this year’s kākāpō chicks. 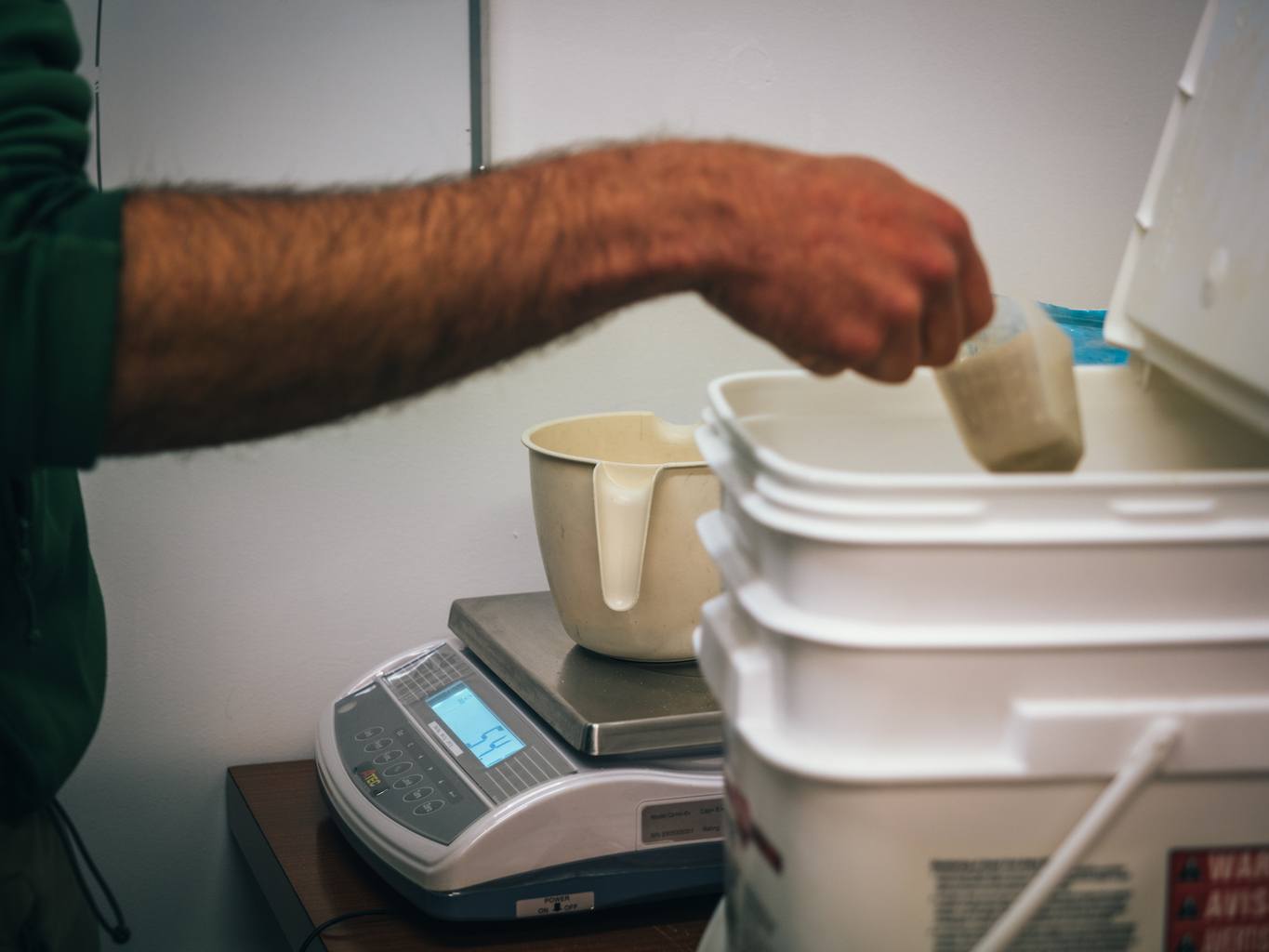 Greeted by a gaggle of kākāpō in a pen, snorting and chortling their way around a makeshift indoor forest, I let out an audible sigh of deep contentment.

How amazing to see such rare creatures come back from the abyss?

And also, they are seriously so cute. How could you not love them? They literally make snorting noises like a little pig.

I spent hours observing the new chicks, watching them come out and learn how to climb on the branches, try and eat berries and get it all over their faces, and interact with each other. It was such an exceptional experience, and I felt so honored to be part of their story.

I left Invercargill the next day filled with hope and inspiration, but we all know that what goes up must come down, right? 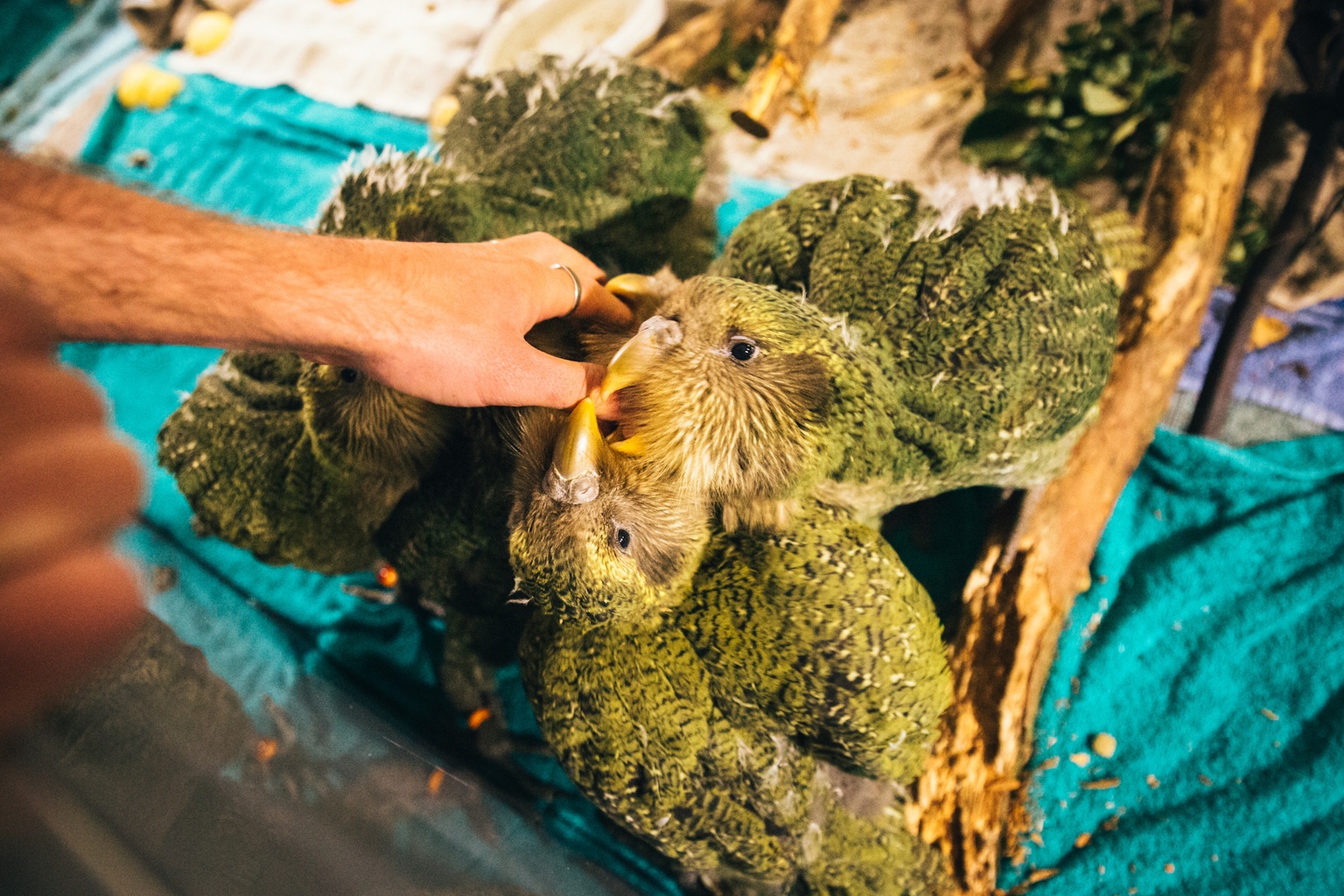 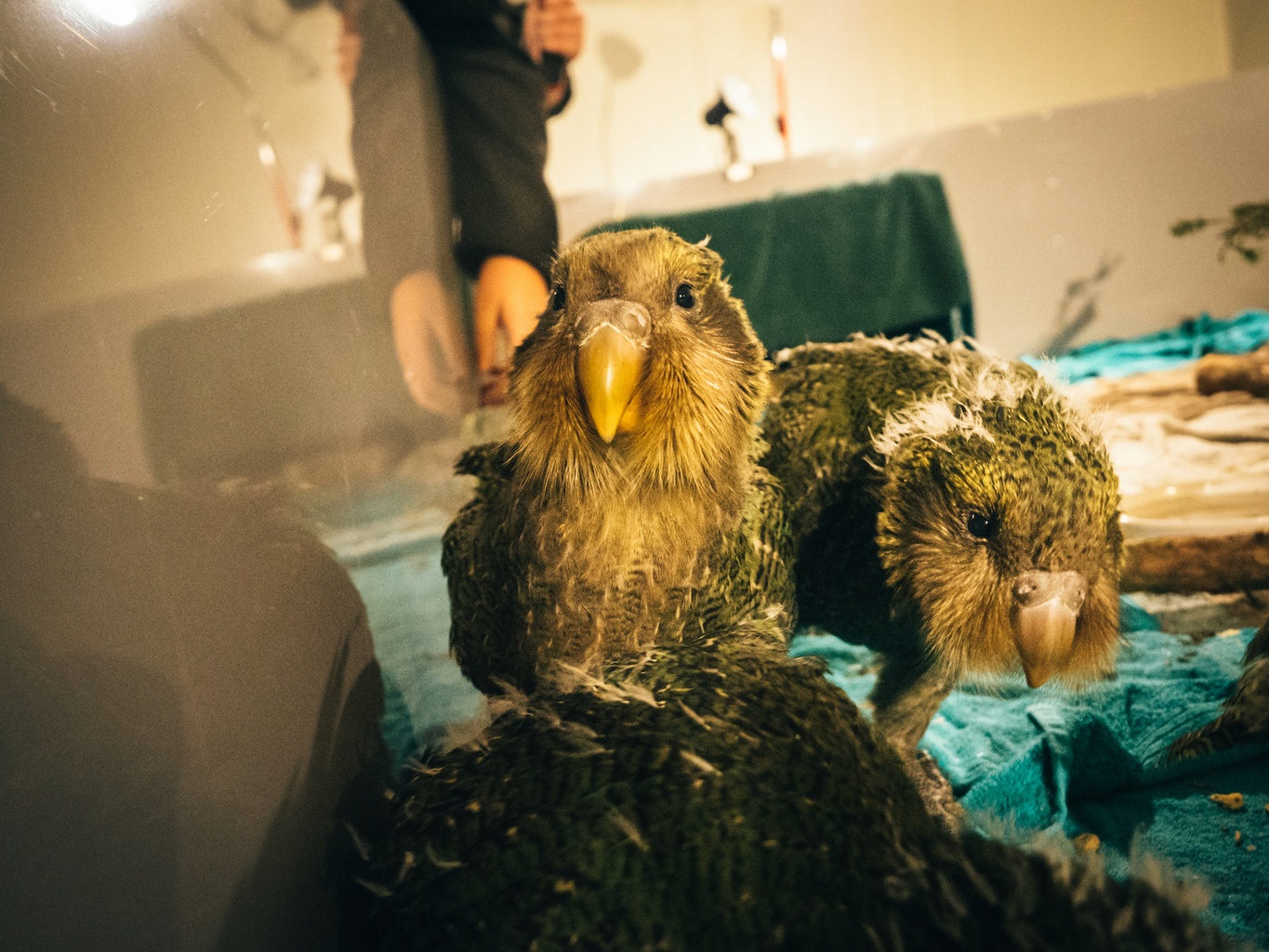 It felt like almost as soon as I left, we were hit with the devastating news of a fungal outbreak that was killing kākāpō.

Aspergillosis is a fungal infection threatening kākāpō on Codfish Island / Whenua Hou and can be extremely deadly to birds. Luckily with swift action, many of the infected birds have been hospitalized and treated on the mainland and have survived, though a few have died as well. 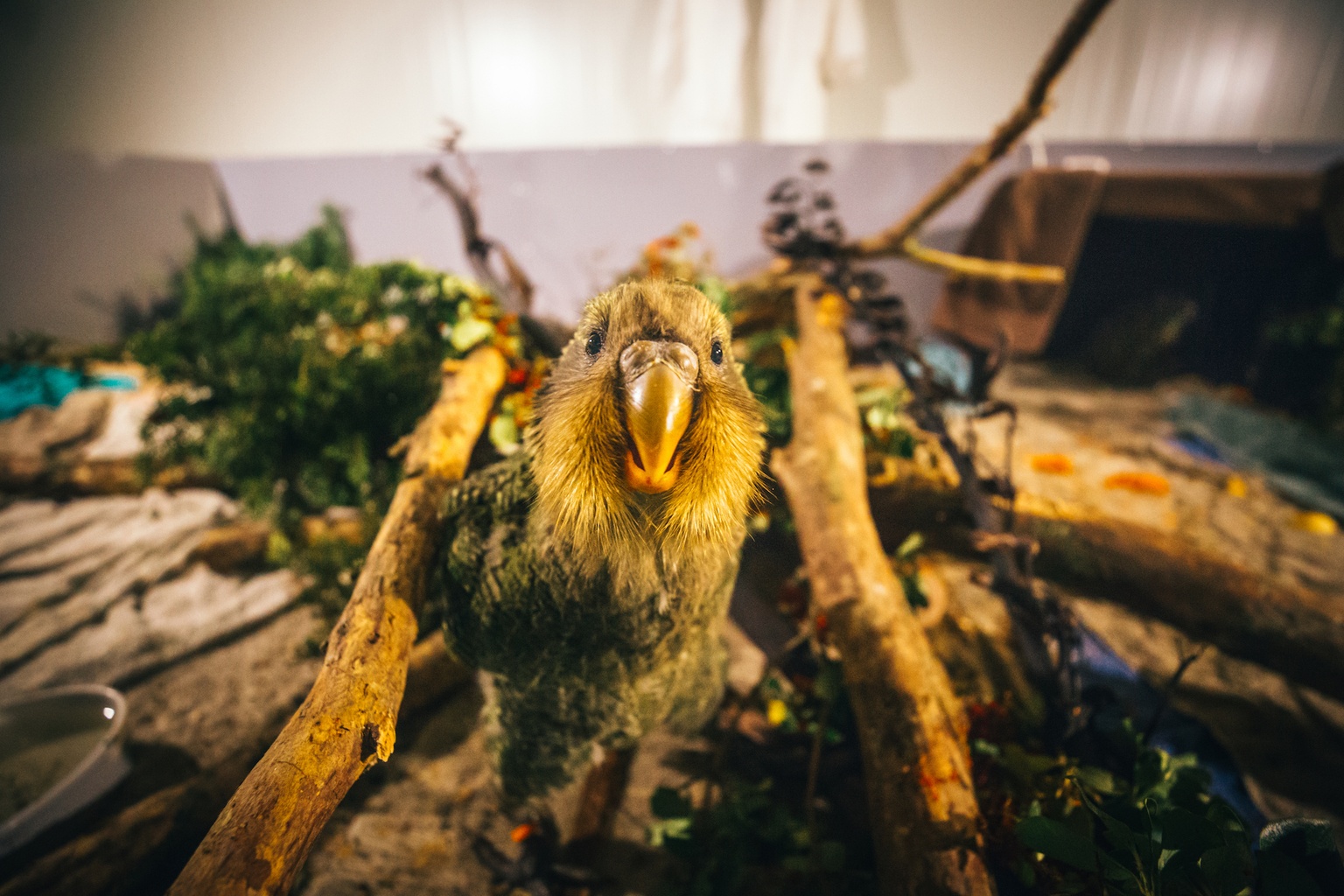 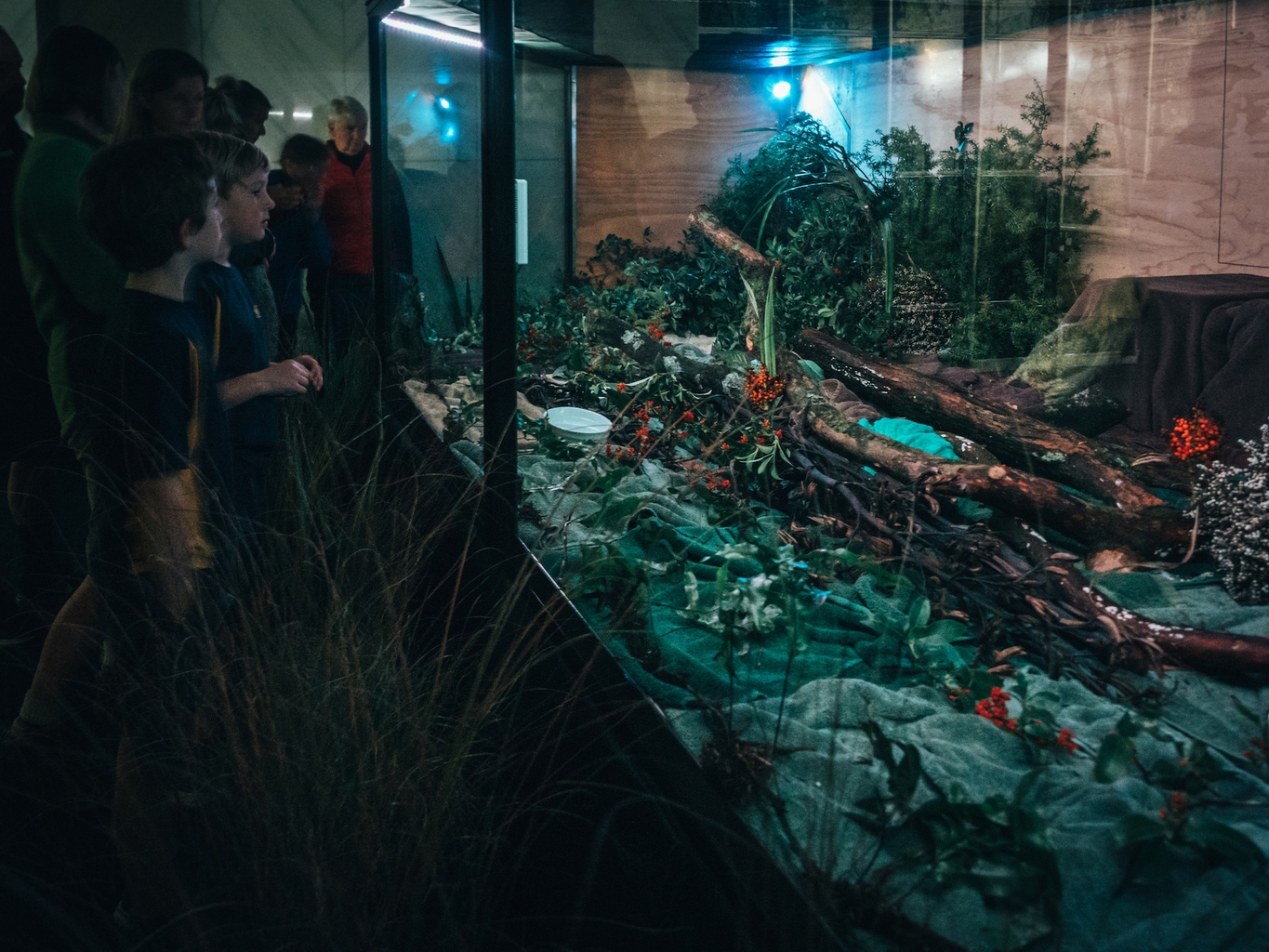 2019 has definitely been a year of ups and downs for kākāpō in New Zealand, and even after some hard times and trials, things are looking up as this year’s chicks make it through the first months of their long lives.

But now the question is, where are they going to live? We’re running out of space!

Ultimately the big goal is to get kākāpō back on mainland New Zealand. With so many more kākāpō, it means we’re running out of pest-free places where we can keep them safe.

What an exciting new problem to have!

Have you heard of the kākāpō? Are they your new favorite bird? Share!

Donate to Kākāpō Recovery. All donations make a difference 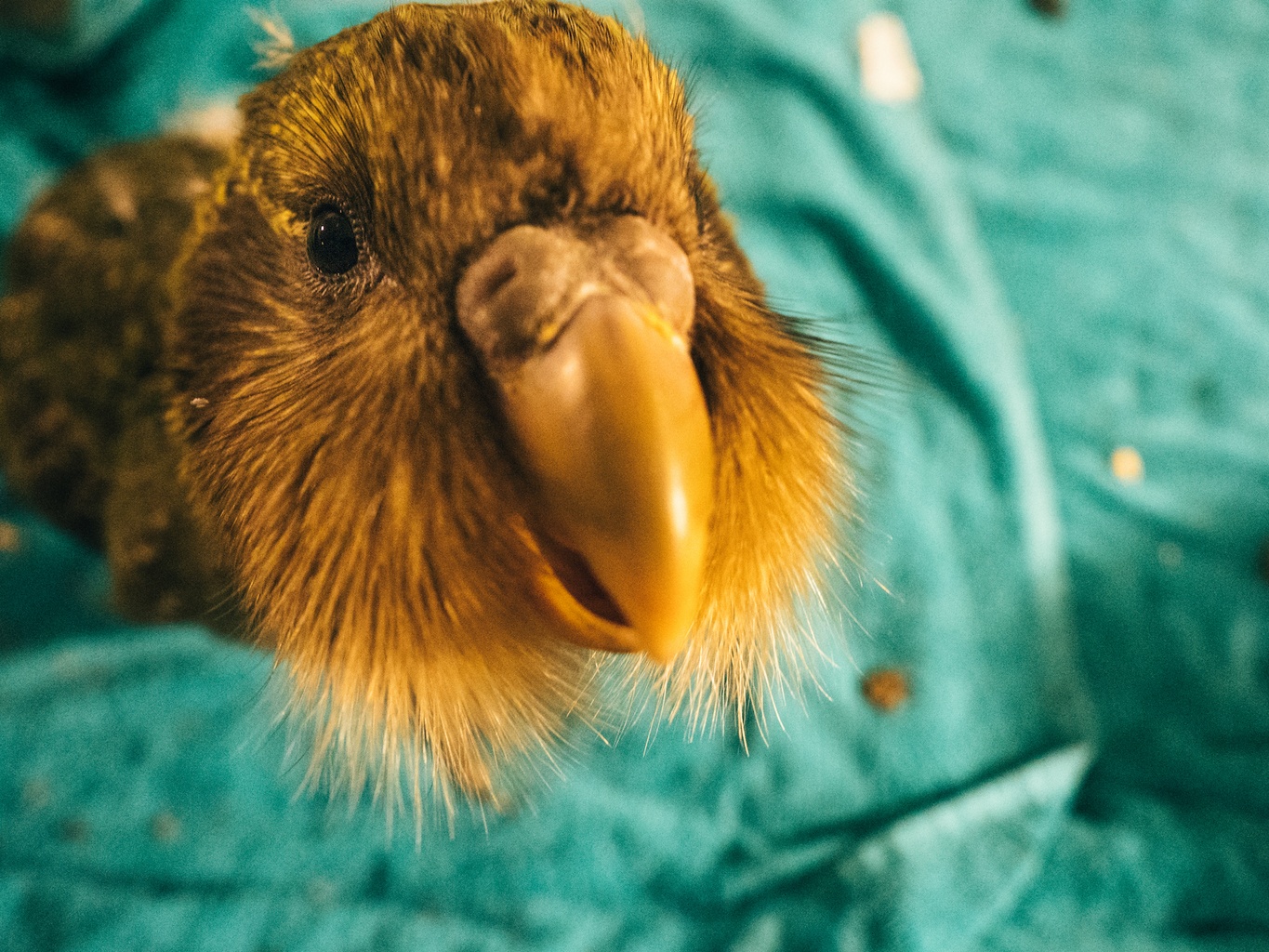 Written by Liz and was published on November 25, 2019 in Bird Nerd, Get Inspired, New Zealand 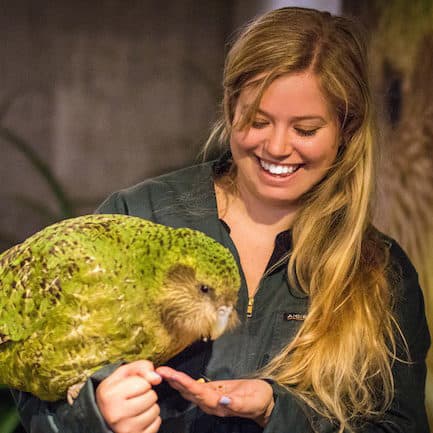 The Story of the Kākāpō + Giveaway

This is a story a long time in coming, my favorite kind of…Read More 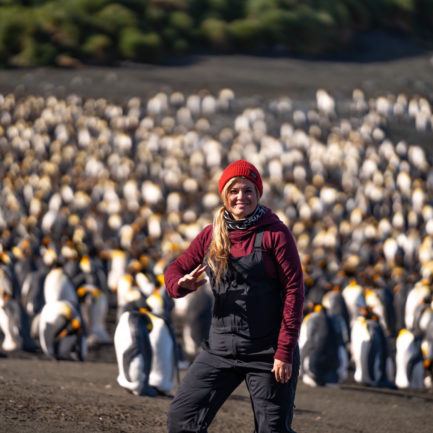 Macquarie Island is a wildlife paradise 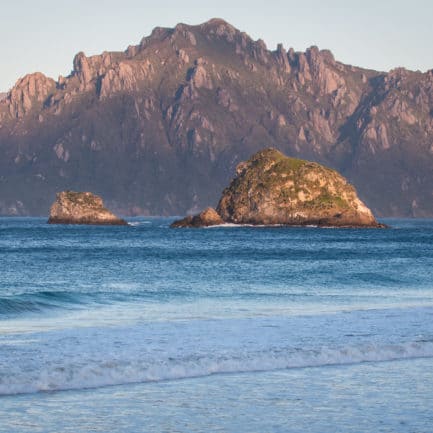